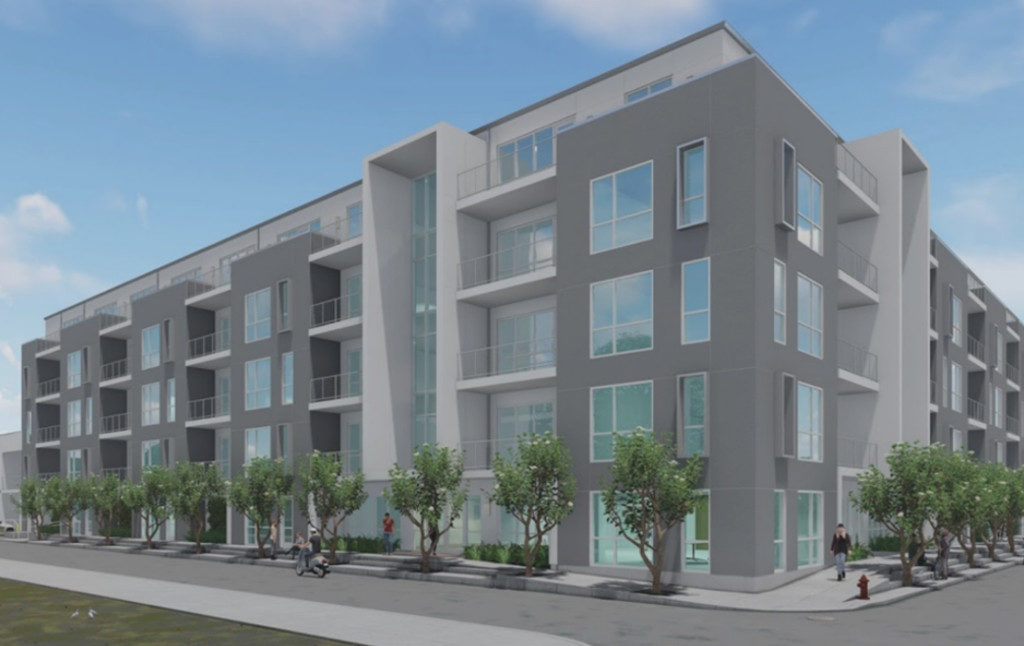 The above picture is of a condominium building called The Saxony, which is presently under construction in New Orleans’ historic Bywater neighborhood. If I had not told you that this is where The Saxony was being built, I assume you would not have been able to guess. That is because The Saxony manages to be simultaneously (1) so dull and generic as to fit equally well anywhere (2) so uniquely unlike anything else in a historic New Orleans neighborhood as to disrupt the aesthetic experience of an entire street.

Here, for those who have never had the good fortune to spend time there, is what the rest of the Bywater neighborhood looks like: 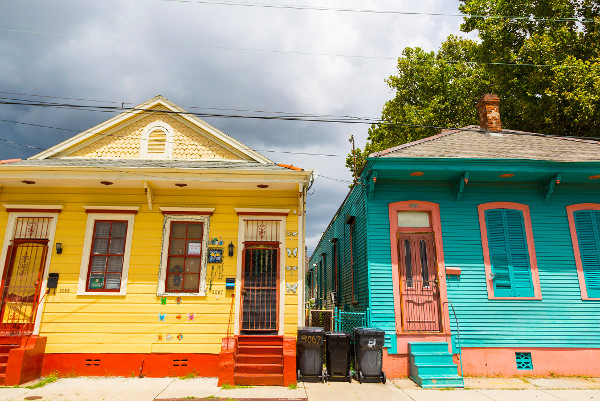 You don’t have to share my eccentric belief that more human neighborhoods should look like the Bywater to think that at least the Bywater itself should get to look like the Bywater. I am uniquely fond of colorful little old houses, it’s true. Some people like Brutalism. But it’s actually possible for us to live on the same planet together and both be happy. If the world has a diversity of places, we can each find the kind of neighborhood that most suits us. And yet: I find myself in the position of having to  battle with the people who like massive glass condo buildings, because if nobody stops them they seem to spread fungally into every available space. Even the Bywater, a tiny part of the city of New Orleans, can’t be permitted to maintain a unique aesthetic fabric.

But this doesn’t just upset me because I want the ability to live in a neighborhood of small-scale custom-painted shotgun houses with stoops and shutters and front porches, and I am sad watching one of the few places like that be eroded. It upsets me because these kinds of changes to places do not occur as the result of democratic input. They are driven by Economic Forces, that is to say, rich people. We live in a money-made world, and what buildings get built, just like what products get made, is a function of what is profitable, and what is profitable depends on who has money to spend.

The people of the Bywater did not decide to put up The Saxony. The Saxony exists for this reason: because of Airbnb, condo prices in the historic downriver neighborhoods of New Orleans are high. This was noticed by a “developer,” i.e. a person/corporate entity with a lot of money (I put the word in quotes because it is a propaganda term designed to characterize whatever changes make money as inherently positive). That developer bought an old factory site, cleared it, hired an architect to quickly put together plans for a 75-unit building, and got started on erecting it. We all know how this works, but the striking thing about it is that there is literally no democracy in the process. At no point do the people in a space decide what goes there; there is no vote, the fluctuations of condo prices do the voting. (Actually, perhaps that’s not quite fair: the Saxony’s developer said they met with some neighbors who disliked the building, and in response they put shadows on the balconies to make it more interesting.)

One of the most infuriating things about “gentrification” (an often frustrating term that captures many different kinds of changes, some negative, some less so) is that it involves the subjugation of a people to the whims of market forces. If your neighborhood is profitable, it will change, and you will not be asked what you think about that change. Even if you are the sort of person who believes gentrification is good, and argues that it improves services with limited displacement of residents, it’s important to concede just how tyrannical it is. In a fair world, everything that could substantively affect the character of a place would be deliberated and voted on by the people who live in that place. But in this world, people are subjected to whatever changes turn out to be in somebody else’s economic interest. (And because of the black-white wealth gap, decisions in which “money=votes” will inevitably disenfranchise African Americans and further empower white people.)

Aesthetic disruption aside, one of the disturbing things about The Saxony is that almost nobody is likely to live in it. It will probably consist in large part of Airbnbs. It’s not just that a bunch of new neighbors are moving in. There aren’t even any neighbors. The effect of Airbnb on New Orleans has been depressing, which is why it’s controversial. Many homeowners love it, because it brings income from spare rooms. But that’s not all it does: it also means that some enormously wealthy person can just buy up houses and Airbnb them. If I’m a longtime resident, that means that I no longer have neighbors. I have a rotating stream of tourists, none of whom will stay long enough for me to develop any meaningful connection to.

One reason people seem fine with this is that they hold an implicitly libertarian view of property rights: if I want to sell my house to a company that rents it to tourists, what’s the problem? The house was mine, I could do with it as I pleased. Now it belongs to the company, and they too can do as they please with it. But it’s a myth that this decision affects only me, the company, and their customers. There are psychological benefits from having an actual permanent community. Every step taken that erodes that community, even if it is difficult to quantify, makes the lives of those in it worse off. The decisions that I make have effects on other people, even if we’d like to think they don’t. If I participate in the life of my street, getting to know people, hanging out with them, helping them in tough times, and generally being a connected and public-spirited person, everyone is better off. If I refrain from doing so, everyone is worse off. We often don’t realize how connected we are. (Furthermore, what is often derisively called “nostalgia” for places as they used to be is in fact an ordinary sense of human attachment to place and community, and a need for the fulfillment that comes from a life grounded in a continuous social and cultural context, one that is not constantly being “disrupted” by market forces.)

Here’s another example: I live in the French Quarter. It’s very beautiful and lots of fun. I rent a cute apartment in an old building. But there’s something very strange about where I live: it’s a ghost town. Once, the French Quarter was a bustling ethnic neighborhood. Families lived there, jazz musicians grew up in it. Now, however, whole streets are full of seemingly empty houses. That’s because the French Quarter has become very desirable and expensive real estate. Many people from out of town buy pied-a-terre apartments there, which they keep vacant most of the year, coming in for occasional weekend visits and for Mardi Gras. They hold these places as investments, and they’re pretty sound investments, too. But in the process, they have killed the life of the neighborhood. When I was looking for a place to live, a realtor showed me round one building and told me I would probably enjoy it, because it was very quiet. All of the other units were condos held by absentee owners who never visited. If I lived there, I would be the only one in the entire building most of the time. 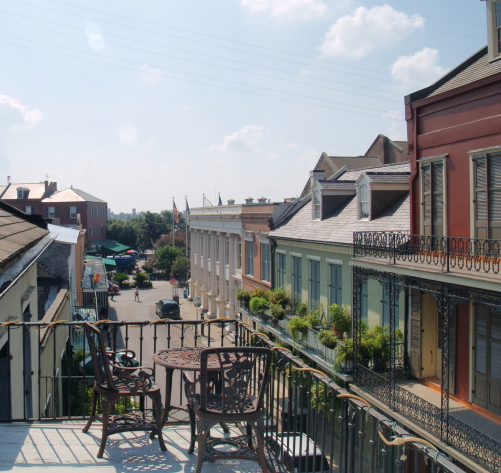 This didn’t actually sound enjoyable. It sounded deeply sad and lonely. And sure enough, when I sit on my balcony, it’s an eerie experience. I can see about eight other balconies across the way. They’re always empty. There’s nobody home. I find it tragic: these are some of loveliest places to sit in the entire world, and nobody is ever sitting there. I don’t want to give up my little apartment, but it’s a very isolating place to live; if you want social connections, they’re not going to come naturally. “Ghost towns” are also unsafe: because there are no “eyes on the street,” you’ll often walk alone at night. (In the French Quarter, this problem has been fixed not by requiring that residences be resided in, but by the hiring of a special private police force.)

I am not, of course, in the only neighborhood where this happens. New York City has become infamous for building luxury towers that remain empty, bought up as investments by foreign billionaires, even as the city’s homeless population enlarges. (In 2014, literally half the city’s luxury condos were vacant.) And it makes me deeply, viscerally angry, because it’s the symptom of a “money-made world,” in which economic transactions between people are the only thing determining what kind of society will be produced. At the end of my street, there is an old brick building that used to house a Catholic school. But the school shut down in 2012, due to declining enrollment (no wonder, since families no longer live in the neighborhood). The archdiocese sold it to a developer. Now it’s becoming a luxury condo building called “The Academy,” a name that for some reason makes me to want to retch. Almost certainly, hardly anybody will actually live there. It will be another high-priced ghost village.

There is only one school left in the French Quarter. I love it; a place just feels better when you can walk around and see kids playing at recess or goofing around waiting for the bus. I am wondering how long it will take before we reach the tipping point, where it wouldn’t make economic sense not to turn it into condos. That’s how the money-made world works: everything you love will continue to exist, until the economic situation changes to the point where a lot of money could be made by destroying it. Everything has a price, and we all just have to hope that the things we care about don’t end up as “underperforming assets” failing to reach their “maximum potential.”

I hate how helpless I feel in a world where the free market determines the course of development. If there’s money to be made by turning every unit around me into short-term rentals, well, sucks to be me. If our historic block of wooden houses could be better monetized by sticking in one of the cookie-cutter structures seen popping up next to every highway in America, then it’s going to happen no matter what. The residents may want to keep a neighborhood’s historic character (and my impression is that, if Bywater residents could vote, they would overwhelmingly support requiring new structures to fit in seamlessly with the old ones). But they don’t decide; money decides. The money-made world is a depressing one: your fate is in the hands of people much wealthier than you, and they are choosing to build lonely, isolating places that will make all of us feel more depressed. Advocates for gentrification and development often remind us that “cities change,” that all things must pass. But, first, it matters which changes we choose to make, and whether those changes make life better or make it miserable, with neighborhoods becoming bland and lifeless. And second, it matters how changes are decided upon, whether people will decide for themselves what they want, or whether they will live in a dictatorship of the market, where the power of money is supreme.