The Sad Spectacle of Cities Groveling to Amazon 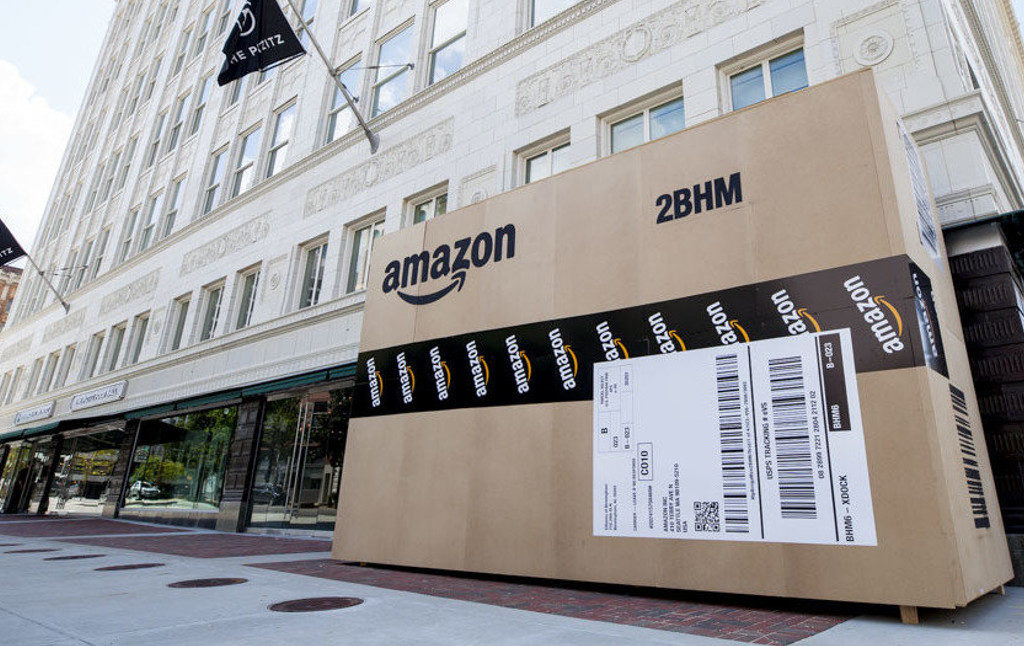 Every city in America wants Amazon to locate its second headquarters there. It’s the “trophy deal of the decade,” promising up to 50,000 jobs for a single lucky metro area. According to an NPR report, cities are resorting to desperate measures in order win Jeff Bezos’ heart. Birmingham littered its streets with enormous Amazon boxes. (See above.) The mayor of Kansas City bought a thousand items on Amazon and reviewed them all. Tucson sent Amazon a 21-foot saguaro cactus, which Amazon declined. Places as unlikely as Gary, Indiana and Fargo, North Dakota have gotten their hopes up. The Rochester Democrat and Chronicle proclaimed that “a great case can be made for the Buffalo Rochester Metro Corridor,” since while the region may lack some of Amazon’s stated search criteria, it makes up for it in “moxie.”

There’s something sad about watching suffering post-industrial cities like Gary plead for an investment from Amazon. (Gary’s mayor issued a heartfelt appeal, on the mistaken assumption that Jeff Bezos possesses a conscience.) It feels like the peasants are coming before the king, bearing whatever meager offerings they can scrape together, and begging him for his favor. Having humbled themselves at Bezos’ feet, praised his products and promoted his brand, nearly all of them will walk away with… nothing. Even though Bezos could single-handedly transform the economic fortunes of a place like Gary, the spoils will almost certainly go to a place that is already prospering.

Part of trying to lure Amazon, of course, involves bribery: cities are trying to put together a favorable package of financial inducements that will make them appear sufficiently “business-friendly.” As Slate’s Henry Grabar explained, “virtually every city and state will roll out a carpet of tax breaks, plum real estate, and other local incentives. (All for a company dedicated to undermining the local businesses that will pay taxes to support the services Amazon uses.)” It’s a common pattern among municipalities trying to convince large companies to move there. And as Grabar points out, even when a company accepts an offer, they also have a powerful means of extorting the city in the future, by constantly threatening to take their business elsewhere. The whole system  “rewards corporations for being flighty, faithless partners to cities and punishes small and local businesses that cannot make credible threats to secure their own incentive packages.”

This dynamic is commonly called the “race to the bottom”: cities and states must compete with each other to give corporations the lowest taxes, the fewest labor regulations, the largest giveaways of property. The more a place is struggling, the more they need outside investment, and the more they’ll be willing to do in order to bring in new firms. This gives people like Jeff Bezos phenomenal leverage over the weak. If Bezos told the mayor of Detroit that his city would be a top-3 contender if and only if the mayor recorded a promo ad for Amazon in which he stood nude singing a song called “Hail To Thee, Amazon” while saluting the company logo, the mayor would have to consider the offer carefully. (A mayor who cared about the economic well-being of his residence probably ought to agree.) Honestly, that’s really not far off from what is happening: mayors are recording ads for Amazon, and the only thing that has kept them from fully debasing themselves is that Bezos hasn’t yet requested it.

This pattern recurs over and over. Louisiana nearly bankrupted its state treasury writing checks to the film industry, as part of a doomed effort to turn New Orleans into the “Hollywood of the South.” (When the checks dried up, the industry left.) The case of sports stadiums is notorious. Sports teams force municipalities to spend a fortune building new stadiums, on the promise that the local economy will be “stimulated.” They can then threaten to leave unless they receive further bribes. (And it turns out that they don’t stimulate much at all, bringing few economic benefits in return for the millions of dollars spent appeasing team owners.)

All of this is a form of extortion by large corporations. But it has very little to do with the “free market.” Giving a specific corporation its own massive form of tax relief, and denying such relief to local small businesses, means that the government is giving certain businesses clear advantages over others. They are, to use an irritating right-wing catchphrase, “picking winners and losers.” Amazon, by virtue of its largeness, gets a special legal status that its competitors do not, allowing it to become even more of a monopoly than it already is. We can already see where this is heading: a tiny number of companies become so powerful that they are essentially private dictatorships. A local government must write the laws in any ways the company demands. (Just imagine how many legal concessions Amazon could extract from the mayor of Gary if it promised to move there.) The result is that, if a corporation is large and powerful enough, and people are desperate and dependent enough, any town can be turned into a de facto “company town.”

This should be truly frightening. If a single private individual like Bezos can get every mayor in America kissing his feet, that should tell us that the balance of power in the country is disturbingly skewed. It’s especially concerning when we think about the type of individual we’re dealing with. Jeff Bezos, as I have explained before, is a horrible person. This is not just because he is extremely wealthy and declines to use his wealth to ameliorate the suffering of his fellow human beings. It is also because he doesn’t actually care about the people he employs. Despite being filthy rich on an almost unimaginable scale, he staunchly opposes efforts by his employees to improve their bargaining power over their working conditions and compensation.

It’s very difficult to know how this situation can change. Efforts to enact strong worker protections or control corporate power at the municipal level will displease the billionaires, and cause them to pack up and leave. That’s the same dynamic that can make globalization so ruinous: if your boss is a tyrant who pays you a pittance, and you fight back and win, the company will just close the factory and relocate to a country where the people are grateful enough for the work that they shut up and die quietly. (Even The Economist has admitted that there is evidence showing countries decline to enforce labor standards in an effort to maintain foreign investment.) A Seattle venture capitalist warned that Amazon’s decision to branch beyond the city was probably driven in part by a desire for a “more welcoming atmosphere,” a place with a more “stable and business-friendly environment,” and without Seattle’s “focus on dividing the pie of economic opportunity rather than growing the pie for the city and the region is undoubtedly among them.” All of this is euphemism, of course: it means that Seattle has tried to force companies to pay workers a living wage, and because companies care about profit rather than people, they want a place where they can pay as little as possible for the same work.

(Brief aside: talk of “dividing the pie” versus “growing the pie” is very common on the libertarian right. The argument is that while the left wants to divvy up existing wealth more equitably, the right wants to make more wealth for everybody by “growing” the economic pie. This rhetoric is misleading for two very obvious reasons: first, “growing” the pie doesn’t necessarily make all people better off. The economy could be growing, but with the benefits only going to a small group of people. Just because there’s more “pie” in the aggregate doesn’t necessarily mean that I am getting more pie, and distributional “slicing up” questions always matter. Second, because money is power, in certain ways it’s actually impossible to make “everybody” better off, just as it’s impossible to give “everybody” more votes in an election.)

Of course, all of my grousing may just be sour grapes, because Current Affairs’ home city of New Orleans did not make Amazon’s shortlist. It’s true that we have been unfairly overlooked as a contender: after all, we have a high-tech rapid transit system, new innovations in infrastructure repair are improving the pothole situation, there are multiple areas with minimal shootings where the HQ could locate, and we are developing new highly-desirable waterfront property. But it’s also true that having Amazon come to your town can be a mixed blessing. Will it create jobs? Yes. (Albeit highly exploitative jobs working for a demented tyrant.) But it will also raise rents, bring an influx of insufferable techies, probably cause the bulldozing of some old neighborhoods, and mean that Jeff Bezos now owns your city. Tech ruined San Francisco, and it could ruin your town too.

Ultimately, the sad spectacle of mayors groveling to Amazon illustrates an important truth about the contemporary economy: we can’t fix it until we get serious about redistributing wealth and power. So long as there are big powerful monopolies, and people depend on the goodwill of the 1% for their livelihoods, it will be impossible to ensure fair workplaces and equitable cities, and local governments will be left squabbling for whatever scraps billionaires deign to throw them.