The Uses of Platitudes 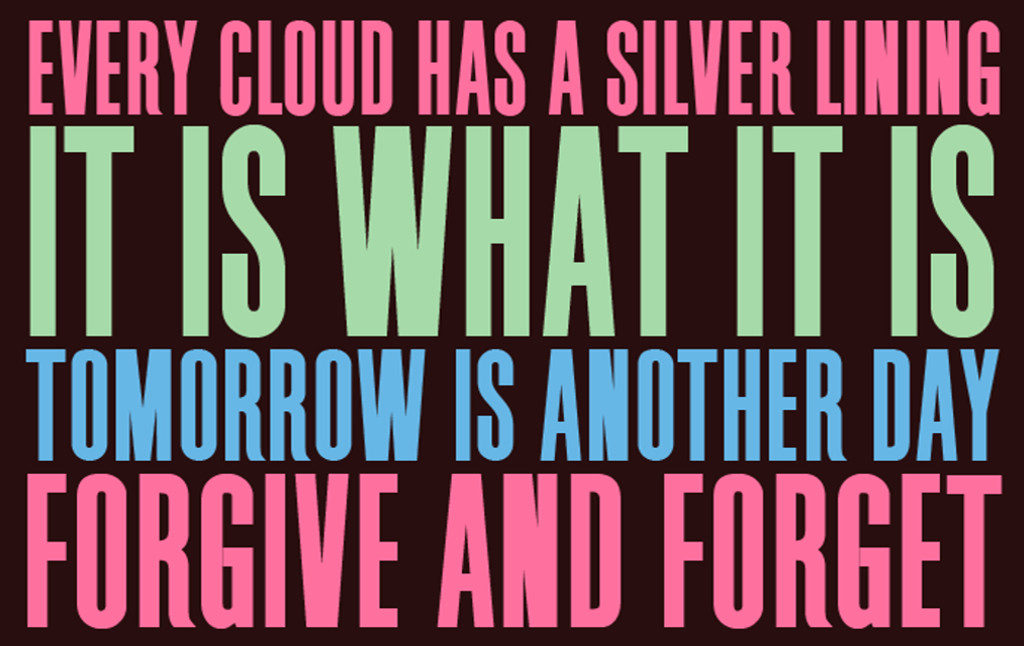 Never shun a cliché just because it’s a cliché…

Nobody likes a platitude. Or at least, cool people don’t like platitudes. Writers grimace at a platitude. It gives them physical pain. I have seen it on their faces. I have felt it myself.

“Death to all clichés” is one of the first rules of writing well. You can find good writers who use long sentences, good writers who use short ones, but you will never find a good writer whose work is full of clichés. This is because it’s almost definitionally impossible to have clichés in a quality piece of writing. Writing should be original and creative, clichés are unoriginal and dull. Worse, they are the enemies of thought itself: since they have been repeated so much, they lose all meaning and fail to conjure any real images. And since they are such common and accepted parts of the language, we fail to examine whether they are actually true or coherent.

A platitude is even worse than a cliché. It’s a sanctimonious cliché, a statement that is not only old and overused but often moralistic and imperious. A cliché can simply be innocently boring (“mountain out of a molehill,” “taste of his own medicine”). It can also be creatively reworked. Instead of saying “plain as the nose on your face,” Raymond Chandler wrote one of my all-time favorite analogies: “He looked about as inconspicuous as a tarantula on a slice of angel food cake.” But platitudes have an aphoristic quality, they seem like timeless moral lessons. They therefore shape our view of the world, and can lull us into accepting things that are actually false and foolish.

What’s done is done. Money can’t buy happiness. Every cloud has a silver lining. What doesn’t kill you makes you stronger. Tomorrow is another day. Go with the flow. Nice guys finish last. Forgive and forget. Such is life. Time will tell. You gotta do what you gotta do. This too shall pass. No good deed goes unpunished. Good things come to those who wait. It is what it is.

Some common traits can be observed. Many platitudes are tautological. They’re not just empty of content because they’re overused, but because they literally contain no content to begin with. It is what it is. Well, of course it is. Everything is what it is. Nothing is what it isn’t. You gotta do what you gotta do. Yes, because if you didn’t, it wouldn’t be a thing you gotta do. There is, of course, some implied meaning. “It is what it is” is assumed to mean something like “X is the unchangeable nature of things, and because the unchangeable nature of things cannot be changed, we must accept X as it is.” But if we drew out what the phrase is actually implying in its usage, it would seem more debatable and invite more skepticism. How do we know that X is actually one of the unchangeable things instead of one of the changeable things? Structuring the sentiment as a tautology allows it to appear inescapable. It is a counsel toward resignation that seems impossible to argue with.

That “encouraging resignation” aspect of platitudes is common. Platitudes are often the things we say to people in order to “quell their cognitive unease,” to find ways of either rationalizing or finding reassurance amid some kind of crisis. They attempt to make things okay, by explaining the seemingly inexplicable as part of a set of necessary and understandable rules followed by the universe. In long lists of platitudes we can detect something of a folk philosophy, the basic principles of which are: acceptance of things as they are, the need for hard work and patience, and confidence that the future will be good and the past isn’t worth dwelling on. After all, everything happens for a reason. Many of them contain the same sentiments as the first half of Reinhold Niebuhr’s Serenity Prayer: “God, grant me the serenity to accept the things I cannot change.” Fewer of them seem to adopt the other half (“… the courage to change the things I can, and the wisdom to know the difference”), which is a shame, because that’s the half that encourages you toward reflection and action.

It’s easy to see why platitudes are sometimes lumped into a category called “thought-ending clichés”: many of them seem designed to turn you stupid. The most difficult questions about life are treated as settled rather than open. When we start questioning the platitudes, life begins to seem complicated and scary. What if everything doesn’t happen for a reason? What if, while clouds have silver linings, human miseries often don’t? What if money does, in fact, buy happiness? Platitudes create the illusion of a fair and orderly world, thereby preventing us from considering the possibility that it is, in fact, a grossly absurd and unjust world. They can keep us from appreciating the depth and completeness of certain tragedies, because they are designed to help us deal with our circumstances without losing our minds. And even when they are telling us that life is unfair or that nice guys finish last, the platitudes command us to conclude that it is what it is and you’ve gotta go with the flow. Platitudes, hammered into us from the time we first come to understand the language, discourage us from the kind of open inquiry that might lead to frightening conclusions, or that might cause us deep distress and disquiet. If it turns out that “what doesn’t kill you” can still turn you into, say, a blind quadriplegic, the world can seem too awful to bear.

It’s understandable that some writers have come to associate platitudes with totalitarian thinking. Hannah Arendt said that Adolph Eichmann “was genuinely incapable of uttering a single sentence that was not a cliché.” George Orwell, in “Politics and the English Language,” saw a direct link between the decay of language and the decay of independent political thought. Clichés eliminate mental effort by giving us a ready supply of stock metaphors and concepts. It’s not surprising, then, that authoritarians should embrace them. Orwell said that with a more judicious use of language, we can be “freed from the worst follies of orthodoxy,” and hopefully keep our brains from being “anesthetized” by manipulative politicians.

Orwell likely overstated the connection between language and politics. I can very easily imagine fascists who use novel phrases (see Ezra Pound), and there are plenty of people who do good and are thoughtful while still relying largely on an old and simple phrase bank, such as those who subscribe to the humble moral teachings of Jesus. Perhaps that’s just proof that there’s little connection between critical thinking and moral goodness rather than between hackneyed language and uncritical thinking (i.e. that Orwell is right that stale language is a sign that a person doesn’t question things, but wrong that people who ask questions will necessarily have fewer totalitarian instincts). But as a writer and a lover of literature, he was naturally inclined to see platitudes as the enemy, and to see a unity between that which is wrong in writing and that which is wrong morally.

The instinctive hatred of platitudes can be just as perilous as the thoughtless embrace of them. I have often seen people dismiss political essays as “trite” or “stale.” I’ve sometimes had mine described this way: this says nothing new, or this reads like it’s from the 1990s. But when it comes to moral and political writing, “unoriginal” is a strange pejorative. After all, we should probably be more concerned with whether an idea is good than whether it is new. The evaluation of works by their novelty has had devastating effects on parts of the academy, where scholars are rewarded for saying the most original thing rather than the truest thing. If producing something “stale” is considered shameful, writers may desperately try to produce something that is different from anything that came before, leaving aside all other considerations or quality or accuracy. (My colleague Brianna Rennix argues in our new print issue that the same fear is partly responsible for postmodern literature’s refusal to simply tell a good story. She and I also argue in a separate essay that the field of architecture suffers similarly: building anything that looks like something that came before is considered nostalgic and unimaginative.)

The trouble with throwing the baby out with the bathwater when it comes to platitudes is that many of them express helpful and accurate sentiments, and do so succinctly and memorably. The Golden Rule, for example, is simply a good rule. Do unto others as you would have them do unto you. It’s brilliant, beautiful, and timeless. In just a few words, it manages to provide a workable moral principle to cover almost any scenario. Think about what you’d want other people to do to you in this situation, and then do that to them. If actually internalized and followed, it’s a succinct recipe for empathy and equal treatment. And it becomes no less applicable the more it ages.

It’s the “actually internalizing” that’s difficult, though. Because platitudes are old, it takes conscious effort to remind ourselves of what they mean. I’ve long felt this way about Gandhi’s famous “Be the change you wish to see in the world.” It’s a coffee-mug-and-welcome-mat sentiment now. But it’s also profound, if you actually spend time working through its implications. You cannot simply try to change the world, you have to change yourself to reflect the values that you’d like to spread. Taken seriously, that isn’t meaningless, it actually has consequences. It means that you can’t be a hypocrite. You have to live your values, and to reflect on what living your values actually entails. It’s a very tough thing to actually do. It’s no wonder we’d prefer that it remain an empty, hippie-ish aphorism.

Of course, many of the platitudes are still bullshit. I hate a lot of them. I’m troubled by what they imply: that things are okay, that they will work out, that there is a plan. I don’t think you should explain away the world’s absurdities and injustices. It’s only by facing them head-on, and recognizing that many of them don’t have silver linings, that you can see just how important it is to fight them. If we accept suffering, for example, as natural and inevitable, then it is easier to be comfortable with the existence of large amounts of it. If it simply is what it is, then getting enraged by it is futile and irrational. But to me, that’s monstrous. We have to examine things critically rather than passively accepting tautological justifications for them. To do otherwise is to be both morally and intellectually lazy.

The compromise, then, is that we shouldn’t recoil at platitudes because they’re platitudes, but should scrutinize them, because even the wisest ones carry no meaning unless we think about them carefully. It’s senseless to accept something merely because it’s old and sounds good, but it would be equally senseless to discard something over its age and popularity alone. Yes, we should be suspicious of conventional wisdom, but a sentiment may also have been passed through the ages because it happens to be correct. Novelty isn’t virtuous by itself, but neither is tradition. Everything, after all, just is what it is.