Party Unity is for Rubes 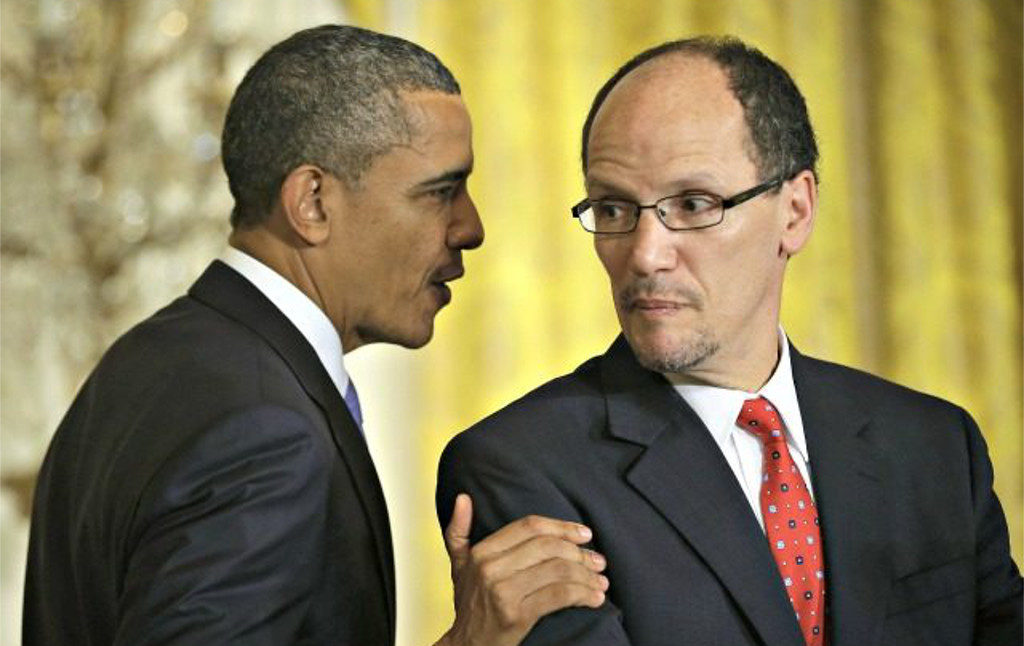 If you want to beat Trump, start by fighting the Democrats…

The question of how hostile the left should be to the Democratic Party is as old as the hills, but it becomes especially acute when the Republicans are in power: after all, with so many harmful policies for working-class and minority communities coming down the pike, isn’t it best for the left and the Democrats to join arms against a common enemy rather than engage in a “circular firing squad”? That argument played out in the pages of Dissent this week: in a response to Gabriel Winant’s excellent piece on the new working class, which was highly critical of the Democrats, Dissent editor and left historian Michael Kazin writes a plea for left unity with the Democratic Party:

For now, it’s crucial that leftists not spend their energy attacking mainstream Democrats, either present or past, as hopeless “neoliberal” sellouts. It is hard enough to defeat the odious plans that Trump and the Republican Congress want to impose on the nation. If we are engaged in a furious internal battle, it may become impossible. Instead, we should emulate Keith Ellison and Bernie Sanders—who have played down their differences with the likes of Tom Perez and Chuck Schumer—and train our fire at the enemy without and not at vital, if not always reliable, Democratic allies.

Kazin recites a perspective one hears often, particularly in the wake of the intensely divisive 2016 primary—mainly from the Democratic center but also from those on the left, like Kazin, who believe that resisting Trump, rather than settling internecine ideological scores, should be our main focus.

For a contrasting view on the subject of party unity, we need only look to the example of a prominent Democratic politician by the name of Barack Obama. In the aftermath of an extraordinarily fractious primary campaign that left the Democrats deeply divided between Clinton and Sanders supporters, the Sanders side recruited Keith Ellison to run for DNC chair. Ellison looked poised to cruise to an easy victory; for Obama to support him or at least stand aside would have been a powerful symbolic affirmation that whatever had happened during the primaries, Democrats now stood united in opposition to the Republican agenda.

So naturally Obama immediately recruited a challenger to Ellison from the ranks of his own administration and pressured the DNC electors to quash the Ellison candidacy, thus affirming his own faction’s control of the party machinery at the cost of party unity at a historical nadir of the Democrats’ power.

What did Obama understand that Kazin didn’t? He understood that party unity is a story for rubes. It’s a feel-good line for pundits and a convenient thing for the rank-and-file to believe, but not something practical politicians take seriously.

Why? Well, the two-party system in the U.S. forces each party to build ideologically diverse coalitions of interest groups. Those interest groups are held together not by mutual love and fellow-feeling but by raw political need: none of the coalition partners can attain a majority by itself, so their only road to power is by staying in the coalition. But naturally each faction would like to see the whole coalition prioritize its own interests over the others; the question of which groups get legislation passed to their liking and which merely provide the foot soldiers for the larger whole is a vitally important one. So the normal condition of U.S. political parties is faction war, with each faction attempting to seize power within the coalition and the whole coalition held together by the need for alliance against the other party.

Doesn’t this permanent internecine warfare render a party ineffective against its opponents? To answer that question one need only look to the Republicans. The Republican Party is an ideologically diverse coalition incorporating ethnonationalist populists, billionaire libertarians and family-values evangelical conservatives, and since the advent of the Tea Party its factional strife has been far deeper and more intense than the Democrats’. The Koch network and the Tea Party movement have been conducting what amounts to an incredibly well-financed all-out civil war with the Republican establishment, doing things like primarying Eric Cantor, felling John Boehner and forcing Republican Congressional leadership to drive the nation to the brink of default. (Imagine if the Sanders wing of the Democrats successfully primaried Nancy Pelosi or shut down the government over single-payer.) Yet if this has hurt the GOP electorally, it’s hard to see how; in the same timespan that this civil war has intensified, the Republicans have achieved a level of electoral dominance over their Democratic opponents not seen in a century.

In the run-up to the 2016 election, many commentators believed that Republican disunity would destroy the party’s chances; nominating a fool and liar with no interest in family values who ran on a promise not to cut entitlements would cause the Koch wing to look elsewhere, moderate Republicans to defect to the Democrats, and evangelicals to stay home. It didn’t happen. The Republican coalition held together, not because it values niceness and unity but because each faction knew that it would have a better shot of getting what it wanted under Trump than under Clinton. Unity on election day and bitter conflict at all other times is not only possible but normal.

Why, then, all the concern within the Democratic coalition about party unity? From centrists it’s natural enough: if I controlled all the levers of power in the party, I’d want my opponents to stop fighting for them too! From leftists like Kazin the story is more complicated. In part, those of us on the left tend to know at least a few people who support the formation of a left third party, and the recognition that this strategy would be obviously catastrophic makes leftists eager to emphasize the advantages of working within the Democratic Party. But it’s worth reminding ourselves that the left-third-party folks are a vanishingly tiny minority in the scheme of things. Censoring ourselves for the sake of these people would be foolish.

I sympathize with this view, but I believe it is incorrect for three reasons.

First, it’s worth remembering how little the left benefitted when Democrats gained unified control of the federal government in 2008, with 60 votes in the Senate. Stymied by centrists in the Senate and lacking political vision at the top, Democrats failed to pass a carbon tax or other serious legislation on global warming, failed to pass card check or other pro-union legislation, failed to pass immigration reform, failed to avert climate catastrophe or reverse decades of rising inequality and de-unionization, failed to do much of anything about racial inequality—the list goes on. There’s simply no reason whatsoever to think that the party in its current form will advance left priorities when in power; reshaping it is our only hope.

Second, the left within the Democratic Party will never see a better opportunity to assert its values and priorities than the present. The faction that has controlled the party since the late eighties is defeated and discredited; meanwhile, the left is emerging from a shockingly successful primary campaign that demonstrated a sea change in public opinion in favor of social democratic policies. If the Democratic Party reclaims power four years from now, its leadership will be far less vulnerable to internal challenges; far better to take a page from the Tea Party’s strategy and kick the leadership while it’s down.

Third, and perhaps most importantly, there’s no reason to believe that the Democratic Party as it exists today is capable of fighting Trump. The party, after a decade of massive losses at every level of government, is now a smoking pile of rubble at every level; it just lost an election to a reality-TV playboy who ran on a platform of screwing the poor. More disturbingly, it has now become abundantly clear that the party has no intention of changing either its personnel or its strategy in response to this manifest failure. As Gabriel Winant points out in the brilliant essay to which Kazin was responding, the Democrats’ problems are profound and structural: they need a new social base to succeed, and a mere rebranding won’t suffice. But the Democratic leadership has refused even so much as rebranding. Left to its own devices, the party will keep doing the same things, and it will keep losing.

Kazin may well prefer a centrist Democratic administration to a Republican one—I certainly do—but that’s not the choice we’re faced with now. Allowing the centrists to run things unopposed is what got us here. Only the progressive left offers a way forward in the fight against Trump, because only the progressive left can build the coalition to beat him—but to do so we’ll need to reshape the Democratic Party, which means seeing off those who control it now. Fighting the Clinton-Obama wing of the Democratic Party isn’t a distraction from beating the GOP: it’s a vital first step.