They Must Be Trying To Fail 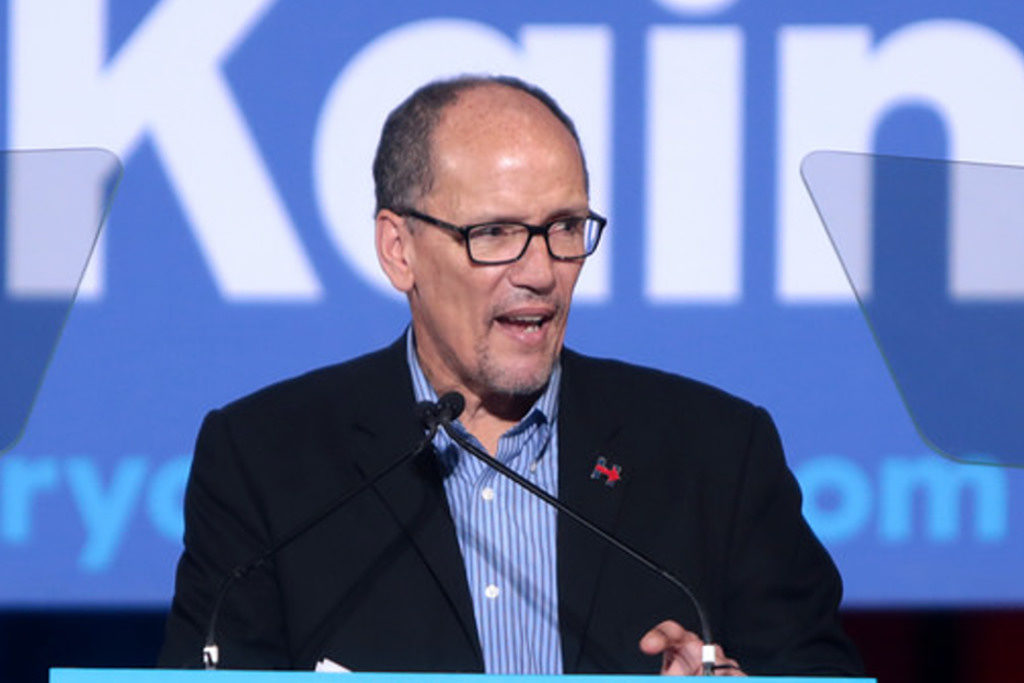 By failing to appoint Keith Ellison to chair the DNC, Democrats have written their suicide note…

At this point, one has to conclude that the national Democratic Party has a death wish. Given the opportunity to throw a minuscule bone to the Sanders progressives, the DNC declined. By giving its chairmanship to former Labor Secretary Tom Perez, instead of Rep. Keith Ellison, party leaders have shown that they must be actively desiring electoral oblivion.

The Ellison/Perez fight had been portrayed as a re-litigation of the Sanders/Clinton primary fight. It was and it wasn’t. It was, in that Keith Ellison was endorsed by Bernie Sanders, while Tom Perez had the backing of members of the party’s more traditional establishment. But that’s also an oversimplification. After all, Chuck Schumer, not exactly a socialist insurgent, had endorsed Ellison, and the political differences between Ellison and Perez were not nearly so obvious as those between Sanders and Clinton.

The race between Ellison and Perez was, however, a meaningful moment in determining the future of the party. And it wasn’t only the left-wing Ellison supporters who seemed to think so. After all, Obama-affiliated Democrats drafted Perez specifically in order to keep Ellison from attaining the chairmanship. Pressure had been brought upon them by wealthy party donors to make sure Ellison was foiled. Even though Perez’s supporters repeatedly insisted that Perez and Ellison were roughly equal in their left-wing credentials, it was clear that they couldn’t possibly have meant what they said. After all, they were desperate to thwart Ellison. As Clio Chang pointed out in The New Republic, the case for Perez made no sense. His boosters suggested that he was just as progressive as Ellison, but in that case, why run him? The only way Perez’s candidacy could be explained was by assuming that all the arguments made for him were false, and that party elites did perceive Ellison as a proxy for Bernie Sanders.

It was quite clear to anyone who thought about it honestly that this was an important moment for the party, and that party insiders knew it. They were willing to launch a disgusting smear campaign against Keith Ellison, which implied that he was a closet anti-Semite. (Some commentators verged into outright bigotry against Ellison’s Muslim faith; Jonathan Weisman of The New York Times suggested that Ellison was an ill-advised choice because he was black and a Muslim.) Ellison quite obviously represented the Sanders-supporting progressive insurgency, and Perez the traditional party elites. While some Clinton supporters went for Ellison, and some Sanders supporters for Perez, nobody could believe this fight was empty of political content, or purely about these two men’s personalities.

That’s why not selecting Ellison is a colossal mistake on a strategic level. Many of Bernie Sanders’ voters during the primary came to hate the DNC, resenting the party’s bias in favor of Hillary Clinton. Sanders voters didn’t like Clinton. They disagreed with her policies on a number of substantive points, and didn’t like being told they had to suck it up and vote for her after Sanders lost the primary. The 13 million people who voted for Sanders in the primary voted for him in part because they felt disillusioned with the traditional Democratic Party. They felt that the Obama Administration had been insufficiently progressive, and that Clinton represented the interests of a tiny group of incredibly wealthy people who couldn’t care less about the lives of the working class. Those people remained angry after the primary. Many of them did not show up to vote in the general election.

It was already extraordinary that the Democratic Party had made so little effort to appease the disaffected progressive faction. After all, when you don’t give ground to the left, they don’t organize for you. In the worst case scenario, they vote for Ralph Nader and destroy your electoral chances completely. It’s very important not to thumb your nose at your base. This was precisely what Hillary Clinton did. She selected Tim Kaine as her running mate, in what even Matt Yglesias acknowledged was an enormous “fuck you” to the party’s left flank. Her operatives spurned the offers of Sanders organizers to help get out the vote in Rust Belt states. We know how this turned out.

So it was incredibly important that the Democratic Party take some steps to indicate that it cared about progressives. Since the election, it hadn’t been doing a very good job of this. (Nancy Pelosi’s insistence that nothing needed to change, and her rebuke to a young leftist, demonstrated the prevailing attitude.) Appointing Keith Ellison to chair the DNC was the perfect opportunity. After all, chairing the DNC is a pretty minor role. It would mostly have been a gesture of friendship and unity, showing that even after the catastrophic mistake of ignoring leftist warnings not to run Clinton, the party was capable of valuing its leftmost members.

But no. Instead of granting the tiniest possible concession, the party has decided to affirm precisely what Nancy Pelosi has indicated: democratic socialists and social democrats don’t belong in the party. It’s not for them. What the party does depends on what billionaire donors want it to do.

This is politically suicidal. During the 2016 campaign, I made efforts to convince leftists to vote for Hillary Clinton. I ran into a lot of resistance. The general theme was: why should I vote for her when she doesn’t seem to care about my values? Why should I support a party that exists for its billionaire donors? And it was hard to come up with good answers to those questions. People on the left despised Clinton and the Democratic Party establishment, and didn’t feel as if there was any reason to be loyal to a party that didn’t seem to want them.

There was another serious pragmatic reason to believe the party needed Ellison. Like Sanders, he had the momentum and energy. Keith Ellison could get young people excited about Democratic politics. He had a way of connecting with people. Even Jonathan Capehart of the Washington Post, who had supported Hillary Clinton, was incredibly impressed with Ellison when he spoke to him, because of Ellison’s unique gift for explaining progressive values in concrete and relatable terms. In an era where Democrats are losing incredibly badly at every level, they needed someone who could motivate people and get them to organize. They needed someone who would harness the force that led to Bernie Sanders’ massive rallies, an enthusiasm that Hillary Clinton could never generate. With a significant segment of those people seeing their candidate yet again blocked (this time by an even more absurdly undemocratic process, in which ordinary party members had absolutely no say), it’s hardly likely that Perez will be able to energize those same forces. Electing Ellison was essential because it could have kept more left-wingers from quitting the party in disgust, and helped bring back some (much needed) robust grassroots organizing.

Now, progressives in the party are further alienated. Good luck getting them to vote for Democrats. No matter how many people may have insisted that Ellison/Perez wasn’t a replay of Sanders/Clinton, it’s impossible to deny that in some ways it was. The progressives needed to receive some kind of gesture. And they have received one: an enormous middle finger.