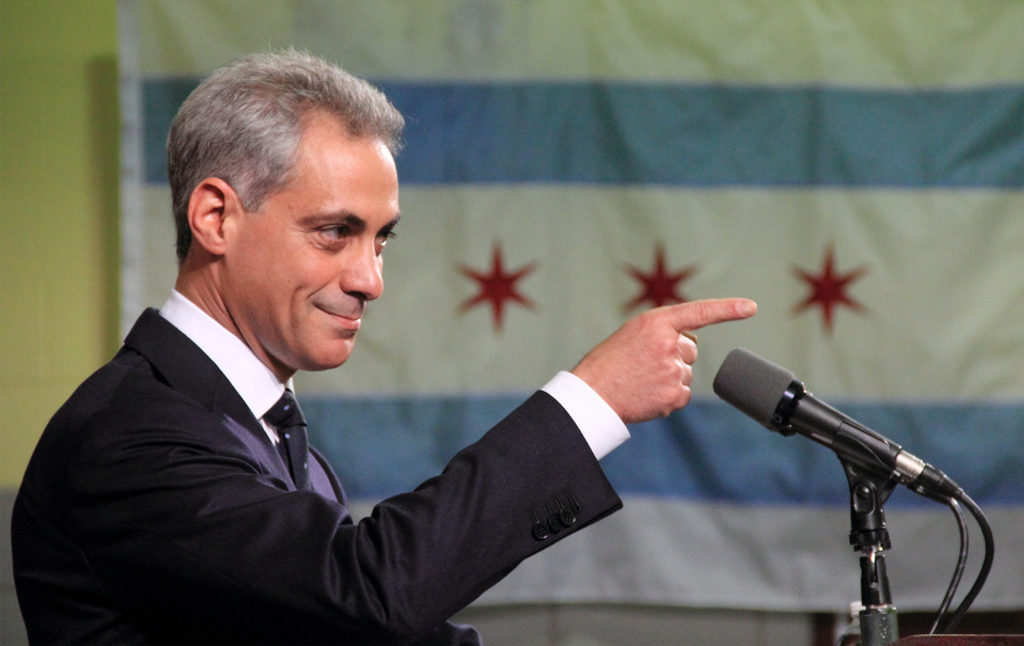 On Wednesday, Chicago Mayor Rahm Emanuel announced a new educational proposal: starting with this year’s freshman class, every student in the Chicago public school system will be required to show an acceptance letter from a college, a trade school or apprenticeship, or a branch of the military in order to graduate. “We live in a period of time when you earn what you learn,” Mayor Emanuel said. (Democratic politicians’ attempts at folksiness are always pretty grim.) “We want to make 14th grade universal,” he also said. The proposed measure is almost certainly a publicity stunt which will have little effect in practice. But Emanuel has made it clear how he thinks educational problems should be solved.

The Emanuel plan is perhaps the stupidest idea a nationally prominent politician has publicly endorsed in the past decade. I hesitate to even explain why it’s stupid lest I insult my readers’ intelligence by belaboring the obvious. But it’s worth spelling out what’s wrong with this, because the fact that a major Obama-aligned Democratic politician is attempting to do this says a great deal about the worldview of the establishment Democratic Party. So here goes.

In Mayor Emanuel’s opinion, working-class kids are too stupid to recognize their own interests. They’re simply unaware that people who go to college earn more than people who don’t, which is why (silly them) they don’t go to college. If you just force them to go to college by flunking them out of high school unless they promise to go to college, they’ll all become highly compensated white-collar workers and America will be a wealthier place.

Allow me to propose an alternative model: working-class kids are not stupid. They’re aware that college grads earn more money on average than they ever will. They’re also aware that not all college degrees are created equal, and that a degree from a community college or some fly-by-night for-profit—the kind of school most working-class kids from Chicago might actually get into—is dramatically less valuable than one from Sarah Lawrence, where Rahm got his BA. They’re aware that college degrees aren’t what they once were, partly because so many degrees are from mediocre institutions; perhaps they’ve seen family members work hard to get that University of Phoenix diploma only to wind up little better off than they’d have been otherwise.

They’re also aware that college costs money, not only money for tuition but all the money you won’t be able to earn while you’re in school, and that people whose parents can’t support them, people who may in fact need to help support their families themselves, can’t afford to just not work for two to four years. Finally, they’re aware that college is hard, particularly for working-class kids with less academic preparation than their middle-class peers who also have less social support and need to work while their peers are studying, and that working-class kids are at a high risk of dropping out. They know that going into debt to attend a college and then dropping out with no degree can be financially catastrophic.

In other words, they know, unlike their mayor, that what happens to the average kid who goes to college—a middle-class kid from the suburbs with white-collar parents who can afford to subsidize his textbooks and partying for four years—is a very poor indicator of what will happen to them, personally, if they decide to go to college. Knowing all this, they make their choice; 62% of Chicago’s high school students decide to have a crack at college after they graduate, 38% don’t.

Now, it may well be that there are a few kids in that 38% who are making the wrong choice, just as there are a few in that 62% (very possibly more than a few) who are making the wrong choice and will just end up dropping out with debt or graduating with a worthless degree and more debt. It might be that a better school guidance program would push some kids into college for whom it’s the right decision. But Rahm isn’t proposing to nudge a few more kids into college; he’s proposing to hold the high school degree of every student in the system hostage until they all go to college, or sign up for the army, or enter an apprenticeship.

What’s likely to happen if his proposal passes? Well, trade schools and apprenticeship programs are bright enough to know that the world only needs so many plumbers, so not a lot of students are going to manage to go that route. Some will join the army, at which stage Mr. Emanuel can congratulate himself for having forced some working-class kids to die for their country on pain of facing the stigma of the high school dropout for the rest of their lives. Some will simply decide to leave high school without graduating. But many will be forced into a choice they know is the wrong one, and have a crack at whatever community college or awful open-admissions for-profit college they can get an acceptance letter from. Expect to see the already overburdened and underfunded community college system pushed to the wall. Expect to see a small boom in the for-profit college industry and the exploitative student loan industry that feeds it. Expect to see many, many students drop out of school with nothing to show for it but un-bankruptable education debt that will haunt them for years.

And finally, perhaps most importantly, expect to see those students who do manage to graduate from whatever bottom-tier school is willing to accept them quickly discover that the degree Rahm Emanuel forced them to earn at great personal expense isn’t worth the paper it’s printed on. First, because college-educated workers, like any other commodity, are subject to the law of supply and demand, and Rahm’s plot to dump hundreds of thousands more of them onto the Chicago labor market will cause supply to greatly outpace demand and prices to crater. Second, because employers will recognize that people who got a college degree from a bottom-tier school that slashed admissions standards to take advantage of the Rahm-and-debt-fueled bonanza don’t have the same skill set or qualifications as the college students they now pay higher wages. In other words, producing a genuinely more educated workforce is a lot harder than Rahm’s plan to print a whole bunch more college diplomas, but even if you could produce a genuinely more educated workforce it wouldn’t raise wages; you’d just have more people competing for the same number of white-collar jobs., and wages would go down.

(Of course, middle-class kids who went to Sarah Lawrence would still do just fine.)

Emanuel’s plan, in other words, will be a disaster if implemented. But if the plan were just his own idiosyncratic idiocy, it would be beneath refutation. Unfortunately, it’s not. The mayor of Chicago is an utterly characteristic representative of the dominant wing of the Democratic Party, and his “you earn what you learn” claptrap reflects what has been a core element of its messaging and policy for decades: the notion that we can solve poverty through education. For most of my lifetime, the Democratic Party’s answer to the apparently permanent stagnation of working-class wages has been to advise the electorate that it’s a knowledge economy and only a better-educated workforce can hope to earn more.

It should be emphasized, though, that  on top of being terrible policy this is also terrible messaging. When voters hear that your analysis of the economy is that it simply has no place anymore for uneducated workers, and that your plan to increase working-class wages is “educate people better for the knowledge economy,” they get three messages: first, that if you’re a low-income thirty-year-old high school graduate with a family who can’t go to school, the Democrats’ plan for you is that you’ll die poor, because hey, it’s a knowledge economy, what can they do? It’s a knowledge economy. Second, that Democrats think your poverty is pretty much your fault for not doing better in school. And third, that Democrats are so completely out of touch that they genuinely believe that becoming a high-tech worker is a serious option for your working-class kids. In other words, what you hear is that Democrats don’t know you, don’t care about you, look down on you, and have no plan to help you. Is it any wonder that you don’t bother to vote, or that if you do you vote for someone who promises to bring the jobs back?

Every time Democrats say or imply that there’s no way for people to succeed in the 21st-century economy without a college degree, they announce loud and clear that they’ve largely given up on helping the existing working class.

But if the Democratic line on education fails on policy and politics grounds alike, why are they so attached to it? I’d suggest two reasons.

First, claiming that class differences result from educational achievement flatters the American elite’s sense of its own meritocracy. If differences in income are mostly explained by differences in education, elites don’t have to worry about why their own incomes have skyrocketed over the past three decades while the rest of the country has done so poorly; it’s the natural result of market forces rewarding talent and hard work. You can see this perhaps most clearly in Silicon Valley entrepreneurs’ excitement about charter schools, an excitement most of the Democratic establishment shares: charters are the noblesse oblige of an utterly self-confident meritocratic elite, an elite which believes that they earned what they have and that the way to make everyone else better off is not to take from the deserving rich and give to the undeserving poor but to make the poor more deserving. (The fact that many of these charters’ educational model is to replace those stupid, lazy public school teachers with brilliant and disruptive Yale graduates says everything here.) The education-solves-poverty line sells well with affluent white-collar professionals, and the average Democratic politician spends vastly more time addressing herself to the needs of those professionals than talking to working-class voters.

But second, and far more importantly, building an economy that once again provides decent, well-paying and dignified jobs for the working class is very difficult. It’s far easier to pretend that the jobs are waiting in the wings if only the working class were educated enough to deserve them than to take on the employers who refuse to offer those jobs. Rebuilding the American working class would require a higher minimum wage, a serious effort to encourage unionization in the service sector, and, at least in areas with sky-high unemployment (places like Chicago), a major federal jobs program to put people to work and force private-sector employers to raise wages. Every one of those initiatives would require direct confrontation with businesses big and small. Creating more innovative charter schools, or forcing more students into college, requires no such confrontation. Placing the burden of fixing the economy on working-class students and their teachers rather than on big business and the wealthy makes plenty of political sense, in its way.

But it won’t work. And liberal pundits who scoff at Trump voters by reminding them that those manufacturing jobs he promised won’t come back would do well to remember that Democrats’ agenda on working-class jobs is just as empty a promise.