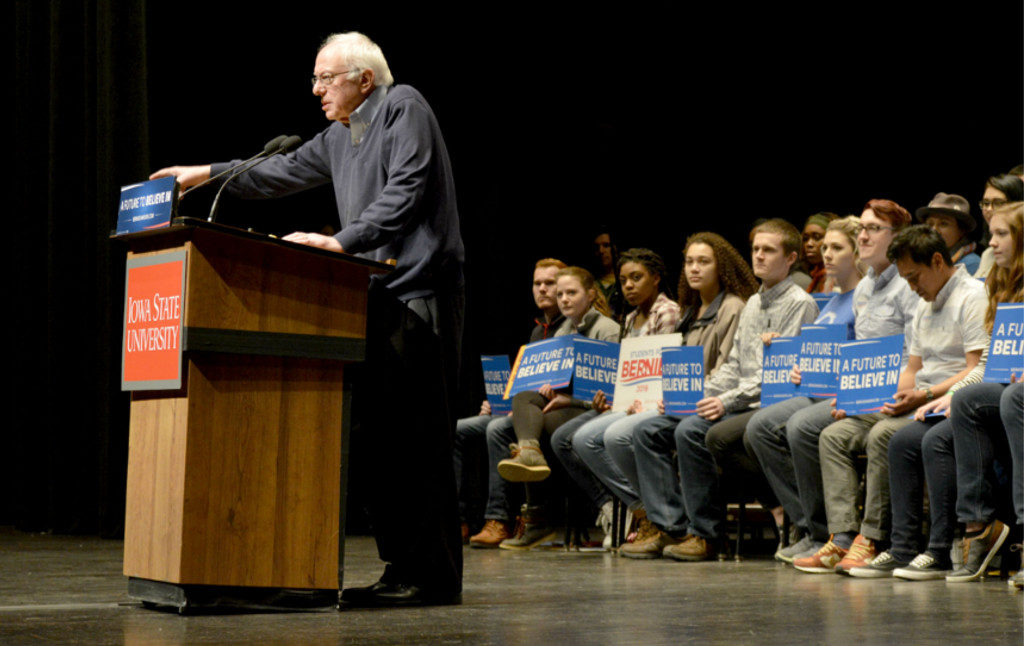 A review of “Our Revolution”

Let us leave aside, for a moment, the question of whether he would have won. (He would have.) The interesting matter now is: what did the candidacy of Bernie Sanders mean? What are we to learn from it, and what can it tell us about the future? It was, in many ways, a remarkable triumph: 20 states and millions of votes for an obscure New England socialist. And yet, it was also a failure. He did, after all, lose.

In the months following the primary, Sanders stayed busy, locked away writing Our Revolution: A Future to Believe In, a book about his life, the campaign, and the future of progressive politics. It’s a useful vehicle through which to figure out what we think of Bernie, and whether people ought to be more like him, or less like him, in the years to come.

If one is being perfectly honest, a book by Bernie Sanders could reasonably be expected to be terrible. Bernie is known far more for the political and personal qualities he represents than for the qualities of his spoken or written prose.

The first surprise then, is that Our Revolution is readable. It actually goes beyond the Bernie stump speech about the declining middle class and the oligarchical 1%. It contains reflections on his childhood, on his experiences of the campaign, his strategic decisions, and his aspirations. Like most of his speech, it never drifts far from economic policy and the question of inequality, but it’s a more lively and engaging book than even the most fervent Sandernista might have expected.

Yes, of course, there’s a lot about saving Social Security, about the collapse of economic mobility and of the misdeeds of Wall Street oligarchs. But Sanders also gives an elegant argument for precisely why he never departs from these topics. Our Revolution makes a considered case for why it’s better to spend one’s time talking about economics and inequality than talking about  horse-race politics and Trump’s latest gaffes.

The nice thing about this is that Bernie doesn’t treat people as stupid. He thinks they can handle charts and data. He doesn’t dumb anything down (the book is over 400 pages and includes  everything from a chart showing average ATM surcharges over time to a photograph of the Cayman Islands headquarters of a tax shelter). The book makes the claim that Sanders is heavy on rhetoric but light on substance seem farcical. He tries to help unfamiliar readers understand complex issues carefully and methodically, and to relate opaque issues like campaign finance to people’s actual lives. 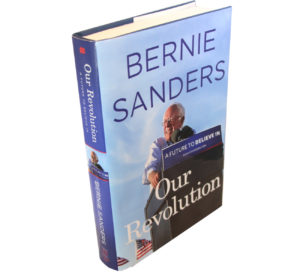 This is the most refreshing quality about Sanders, one that hasn’t been sufficiently noted: he is one of the few Democrats who actually talks as if he cares about those who do not already agree with him. Sanders, despite being further to the left than anyone else in the party, actually tries to understand and empathize with Trump voters.

One could see this trait on display in a recent town hall discussion with Sanders on MSNBC. Speaking directly to a woman who had voted for Trump, Sanders tried to find common ground on the issue of Social Security:

BERNIE SANDERS:  “I am assuming that you believe, correct me if I’m wrong, that we should not cut Social Security or Medicare or Medicaid. Is that correct or not?”

GAIL SPARKS: “Yeah, I believe they shouldn’t be cut.”

SANDERS: “Do you know who is now working very hard to try to do that? Republicans in Congress have a plan under the guise of saving Medicare and saving Social Security, making devastating cuts. That’s what the Republicans are now trying to do. The other point that you made is, who is going to pay for this stuff? And that is a very fair point. What all of us should know is that over the last 25 years, there has been a massive transfer of wealth in this country from you to the top one-tenth of one percent. In other words, the middle class has shrunk and trillions of dollars have gone to the top one-tenth of one percent. Do you think it’s inappropriate to start asking those people to pay their fair share of taxes so we can adequately fund Medicaid and make public colleges and universities tuition-free. Is that an unfair thing to ask?”

SPARKS: “I don’t think it’s an unfair thing to ask. They got rich off of us, so it’s time they put back.”

The performance was impressive, in demonstrating Sanders’ ability to reframe the concerns of Rust Belt Trump voters as the concerns dealt with by his own brand of democratic socialism. In this, he reveals a path by which voters who despised Clinton might be brought back into the party. If one can redirect their hostilities and anxieties, encouraging them to focus on Wall Street and the political establishment rather than minorities and immigrants, perhaps at least some (not all) Trump voters could be turned from nationalist populists to socialist populists.

The serious question over Sanders raised by progressive critics was about his supposed lack of appreciation for the importance of racial issues. Bernie has spoken in negative terms about both “identity politics” and “political correctness.” For some on the left, this is a red flag, suggesting a failure to appreciate the ongoing significance of racism and the ncessity of combating it.

It should be confessed that Sanders has something of a tin ear for millennial anti-racist language. But this might be expected. He came of age, after all, in a different Civil Rights era, one in which the language of labor organizing and the language of anti-racism were not so far different. Sanders constantly harkens back to Martin Luther King and the Poor People’s Campaign, and King’s successful melding of anti-war, anti-racist, and anti-capitalist messages.

The good news, for those who felt Sanders insufficiently attuned to the reality of racism, is that Our Revolution makes clear Sanders’ commitments to fighting it. In a section of the book entitled “The Impacts of Institutional and Structural Racism” Sanders goes through various American injustices that are specifically racial in nature: the wealth gap between blacks and whites, variations in school quality by race, and the hideously unjust system of criminal punishments. In two separate parts of the book, he tells the harrowing story of Sandra Bland’s death in a Texas jail cell (p. 143 and 377), repeatedly listing the names of black people who have died at the hands of police. As he write about racism:

“If we are to be successful in that goal, we must confront one of the most contentious and intractable issues facing our country… the ugly stain of racism. The sad reality is that racism has plagued the United States since before its founding… Ironically, after Barack Obama became the first African-American president, some people triumphantly declared an end to racism, that we had moved beyond the color line. Unfortunately, they were completely wrong… Among many other struggles we must engage in to combat racism in this country, we must stop police brutality and the killing of unarmed African-Americans.”

Sanders goes on, documenting the various ways in which American institutions commit injustices against people of color that are specifically racial in nature.

Sanders may care about the concerns of Trump’s voters, but he has made clear that he has zero tolerance for Trump’s appeal to bigotry. He frequently condemns the way Trump ran “a campaign based on racism, based on sexism, based on dividing us up.” Sanders’ effort to get Keith Ellison, a black Muslim congressman, to head the DNC, was the right kind of move in this respect. It showed precisely what Sanders means by “identity politics is not enough”: it’s not that he doesn’t want diversity, it’s that he wants ass-kicking black progressives rather than centrist technocrats of any race.

One should also point out that the idea of the white “BernieBro” as Sanders’ core supporter was always wrong, and demeaning to Sanders’ supporters of color. In fact, among young people there was wide support for Sanders across racial lines. The story of demographic differences in Sanders’ support was far more about age and wealth (older, richer Democrats preferred Clinton) than about race.

Did the Sanders campaign, as some Clinton supporters have alleged, damage Clinton and thereby weaken her in the general election campaign? Well, possibly, but note the implicit premise. If Sanders undermined Clinton, it was because he pointed out various ways (such as her ties to Wall Street and Henry Kissinger, as well as her vote for the Iraq War) in which Clinton did not share the values of progressives. If the things Sanders had said about Clinton were spurious or false, one could tenably make this claim. But Sanders notably did not dwell on the “damn emails,” focusing instead on the policy differences between his own more leftist stance and Clinton’s centrism. This was a healthy debate. It forced Clinton to move to the left, adopting far more liberal positions on economic policy and education than she was previously running on.

For progressives, then, Sanders’ run energized the left of the party. It showed how they can achieve extraordinary amounts of political success without cozying up to rich donors. It encouraged people who had been extremely cynical about politics to get involved. Nobody who attended one of Sanders’ 20,000-plus person rallies could go away uninspired. Bernie Sanders was the main redeeming aspect of an otherwise-dismal election cycle. He had a genuine vision, genuine hope, and genuine decency.

But now the campaign is over. What should we take from it? First, Bernie showed that disillusionment from the political process is not inevitable. If you give people something to believe in, many of them will indeed get up off the sofa. Second, by building a serious progressive message and refusing to depart from it or sink toward gutter politics, you can help persuade people of progressive ideas. Sanders did not start with wide support. He started with statistically negligible poll results. He built support over the course of the primary, by offering both a personality and a set of political values that a lot of people began to find extremely appealing.

Our Revolution is an encouraging book. Bernie is not dispirited, despite having lost. (Although as he wrote the book he did not know Trump would be the President.) He has a good set of blueprints for what an ambitious yet plausible social democratic platform could stand for. He offers an eloquent antidote to Trumpism, and displays a sincere concern for the suffering and disenfranchised of all races. If the Democratic Party wants to get back into power (and it is not clear, from its response to the election so far, that it does), it would do well to hand out copies of this book to every party official.