What Noam Chomsky Thinks Of “Intellectuals” 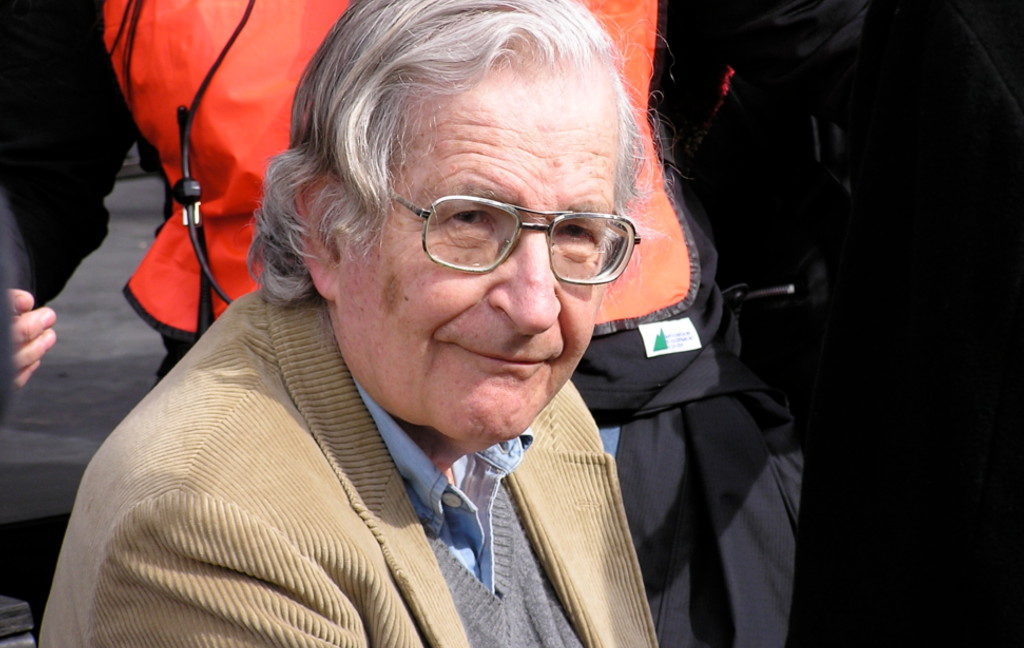 Contrary to what the New York Times thinks, Chomsky is highly skeptical of “expert opinion.”

Recently, Caitlin Flanagan of the New York Times wrote that Noam Chomsky’s writing is the source of “much that is distasteful — and, at worst, fraudulent — about the American university system.” Chomsky’s view of the “responsibility of intellectuals,” she writes “allowed every plodding English department adjunct and uninspired life sciences prof to imagine themselves not as instructors but as “intellectuals,” people whose opinions on American foreign policy were inherently more valuable than those of the common men and women whom, ironically, they claimed to champion.” Thus, she says, Tom Wolfe’s new attack on Chomsky is “precise, scathing and not undeserved.”

But if Flanagan read what Noam Chomsky actually writes about intellectuals, she would see that his views are the direct opposite of what she takes them to be. In fact, Noam Chomsky has spent his entire career vigorously rejecting the idea that a caste of “intellectuals” is in a better position to guide policy than ordinary men and women. His “Responsibility of Intellectuals” essay was a critique of the “Best and Brightest” model of intellectualism favored by the liberal intelligentsia. Here are some of his actual words on the subject of intellectuals, which can be contrasted with the depiction in Flanagan’s article:

I think one of the healthy things about the United States is precisely this: there’s very little respect for intellectuals as such. And there shouldn’t be. What’s there to respect? I mean, in France if you’re part of the intellectual elite and you cough, there’s a front page story in Le Monde. That’s one of the reasons why French intellectual culture is so farcical- it’s like Hollywood… My suspicion is that plenty of people in the crafts, auto mechanics and so on, probably do as much or more intellectual work as plenty of people in universities… So if by “intellectual” you mean people who are using their minds, then it’s all over the society. If by “intellectual” you mean people who are a special class who are in the business of imposing thoughts… they’re really more of a secular priesthood… and the population should be anti-intellectual in that respect, I think that’s a healthy reaction. (Understanding Power, p. 96)

On self-important elitists who think they know better than others:

It’s a very attractive conception that, ‘We are the rational, intelligent people, and management and decision-making should be in our hands.’ Actually, as I’ve pointed out in some of the things I’ve written, it’s very close to Bolshevism. And, in fact, if you put side-by-side, say, statements by people like Robert McNamara and V.I. Lenin, it’s strikingly similar. In both cases there’s a conception of a vanguard of rational planners who know the direction that society ought to go and can make efficient decisions, and have to be allowed to do so without interference from, what one of them, Walter Lippmann, called the ‘meddlesome and ignorant outsiders,’ namely, the population, who just get in the way… It’s a pretty constant strain, and understandable. And it underlies the fear and dislike of democracy that runs through elite culture always, and very dramatically right now… The claims to expertise are very striking. So, economists tell you, ‘We know how to run the economy’; the political scientists tell you, ‘We know how to run the world, and you keep out of it because you don’t have special knowledge and training.’

On Bakunin’s warning that a class of intellectuals would presume to know better than ordinary people:

Bakunin warned that the new class [of the ‘intelligentsia’] will attempt to convert their access to knowledge into power over economic and social life… There will be a new class, a new hierarchy of real and counterfeit scientists and scholars, and the world will be divided into a minority ruling in the name of knowledge, and an immense ignorant majority. And then, woe unto the mass of ignorant ones…A century later, Bakunin’s new class has become a grim feature of contemporary reality.

On the jargon used by intellectuals:

[Obscure academic writing is] a way of guaranteeing that intellectuals will have power, prestige and influence. If something can be said simply, say it simply, so that the carpenter next door can understand you. Anything that is at all well understood about human affairs is pretty simple.

On the arbitrary designation of who constitutes an “intellectual”:

People who are called “intellectuals” are a very curious class… If the janitor who cleans [an MIT professor’s] room happens to have a great deal of knowledge about world affairs and a good deal of insight into human life and understanding, maybe more so than the people who write books, we don’t call him an intellectual… If you look at the history of ‘intellectuals,’ it’s not a pretty one.

Finally, in regard to “The Responsibility of Intellectuals” essay itself, Flanagan has clearly not read beyond the second paragraph (surely understandable, since the essay is long and somewhat complicated). Chomsky’s argument is that intellectuals, by anointing themselves “responsible scholar-experts” and helping to plan and justify the American invasion of South Vietnam, were renouncing the basic duty of intellect, which is first and foremost to be committed to truth and moral integrity. Chomsky argued that, faced with the horrors of children being burned alive by bombs, anyone who was committed to the values of intellectual inquiry, or who found themselves in a privileged “intellectual” position, had a basic duty, as both a person and a scholar, not to deny the truth. To trivialize this argument, to treat Chomsky as snobbishly seeing himself as part of an entitled caste, is appalling on both a moral and, yes, intellectual level.

If Chomsky’s essay in any way contributed to the idea that a class of “intellectuals” had more valuable opinions than anyone else, it can only be because nobody paid the slightest attention to anything Chomsky has ever actually said about intellectuals. It’s incredibly, willfully dishonest of Flanagan to pretend that Chomsky believes the opposite of what he actually believes. How can the attack on Chomsky be “not undeserved” if it attacks a position he has vigorously fought against his whole life?

Chomsky believes, and states openly, that the idea of a self-appointed group of elite “experts” who know best about U.S. foreign policy is absurd. Yet Flanagan suggests that Chomsky legitimized the idea that a group of elite experts know best about U.S. foreign policy. Chomsky says intellectuals aren’t special and that ordinary people know just as much as the supposed experts, and Flanagan hears that intellectuals are special and do have a more legitimate claim to knowledge than ordinary people.