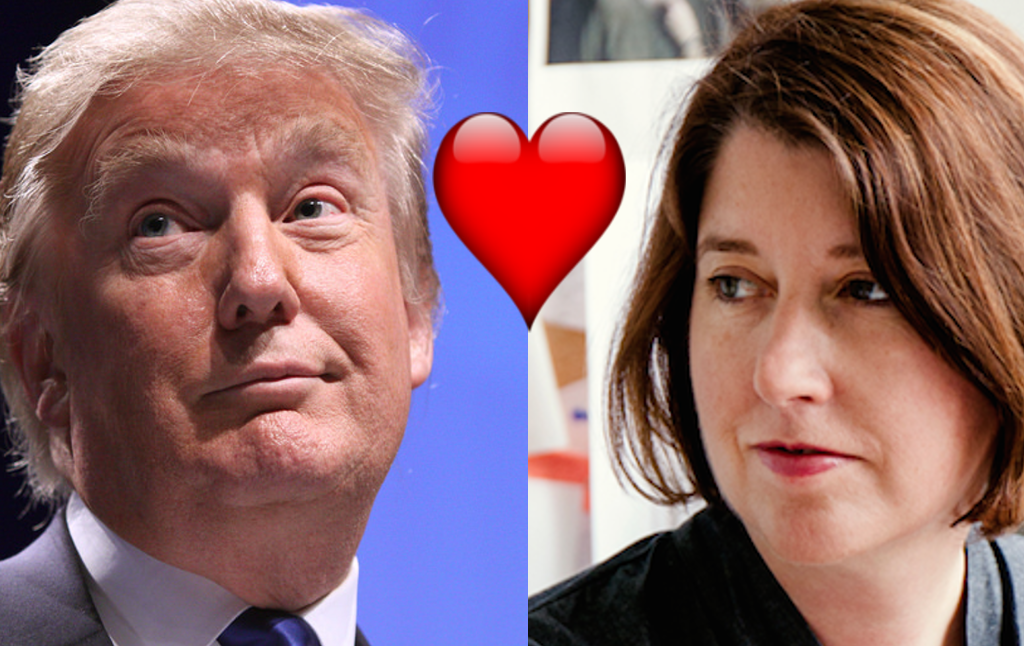 Disparaging millennials is a good way to further alienate them.

Clara Jeffrey, editor-in-chief of progressive Mother Jones magazine, supports Donald Trump for President. Now, she says she doesn’t support Trump. But she can not be taken at her word. After all, in reacting to polls showing that millennials are tending towards third party candidates, Clara Jeffrey wrote: “I have never hated millennials more.” Because heaping disdain on millennials is likely to further alienate them from the Democratic Party, and because those alienated from the Democratic Party will be unlikely to show up to vote for Hillary Clinton in November, and because Donald Trump will become president if people do not vote for Hillary Clinton, Clara Jeffrey supports Donald Trump.

Clara Jeffrey is not the only Democrat supporting Donald Trump. Kevin Drum, a progressive blogger also of Mother Jones, recently wrote an article blaming Bernie Sanders for millennials’ distaste for Hillary Clinton. If Sanders hadn’t pointed out that Clinton was in the pocket of Wall Street, Drum argued, she would not have lost millennial support.

The argument I have just made is, of course, absurd. But it follows from the logic being advanced by many Democrats, which is that by criticizing Hillary Clinton, one supports Donald Trump, since criticism of Clinton makes people less likely to vote for her. Clinton-supporting pundit Bob Cesca has gone so far as to say that “any attack on Hillary must be taken as tacit support for Trump.” Others, like Paul Krugman, imply that any journalism that puts Clinton in a negative light deliberately provides aid and comfort to the Trump campaign.

Say we accept this logic. Whether or not someone supports Donald Trump is not dependent on their professed opinion, or on how they will vote. Rather, it is solely a function of how their actions contribute to the probability that Donald Trump will become the President. If a person’s actions increase that probability, they are supporting Trump, regardless of what they say. If their actions decrease that probability, they are supporting Clinton.

If that standard is applied consistently, Bernie-bashing, millennial-hating Democrats are openly supporting Trump. That’s because Clinton is currently struggling to retain millennial support. And in order to win the election she’ll not only need their support in public opinion polls, she’ll need them all to actually go to a polling place and case a ballot for her. In order to do that, she needs to be wooing them. And those who support her need to be doing the same. Instead, they’re reinforcing nasty prejudices about millennials (incorrect ones, too, because old people undermine the Democrats far more than millennials do). Or they’re criticizing the one person in their party that millennials have come to respect.

Voter turnout is an aspect of the election that Democrats seem reluctant to discuss. When Nate Silver talks about which way the poll-needle has swung in the last few days, he talks entirely about who people support rather than who is actually going to vote. There’s a tacit assumption in much of the news coverage of polls that the old model of “likely voters” can simply be presumed to still hold. Yet it’s not clear that that’s true. If it turns out that Democrats are so unenthusiastic that few of them drag themselves out on election day, then a 3-point Clinton lead in the polls could easily translate into a landslide Trump victory. This is not to say that it will. But it is to say that the only people whose opinions matter are the people who actually show up. If Democrats focus solely on public opinion polling, rather than on getting people enthusiastic about actually turning out on Election Day, they may be in for a rude surprise come November.

What has concerned me from the beginning of this election is this: Democrats seem to have a better thought-out plan for how to blame leftists for allowing Trump to get elected than they do for how to actually defeat Trump. They’re all set to cast blame on Bernie if they are defeated in November. It will be very satisfying for them.

But if you actually oppose Trump, which Democrats and leftists alike do, you need to think about how to get rid of him. It’s fun to sit around saying “Your actions make you a Trump supporter!” “No, yours do!” But it’s also pointless. If we don’t want the next four years to see the rise of new white supremacist paramilitary gangs, it’s necessary to think in terms of strategy rather than the smug allocation of blame. Clara Jeffrey clearly has no interest in actually preventing Trump’s election. Instead, she would rather make that election more likely, by heaping scorn on those whose support she needs in order to stop Trump. By Democratic logic, this makes her a Trump supporter. By a more serious standard, she is simply a hypocrite, castigating others for causing something that she is partly causing through her own actions. A serious plan to defeat Trump involves not insulting the people whose votes Clinton depends on.