We Will Force You To Be Free 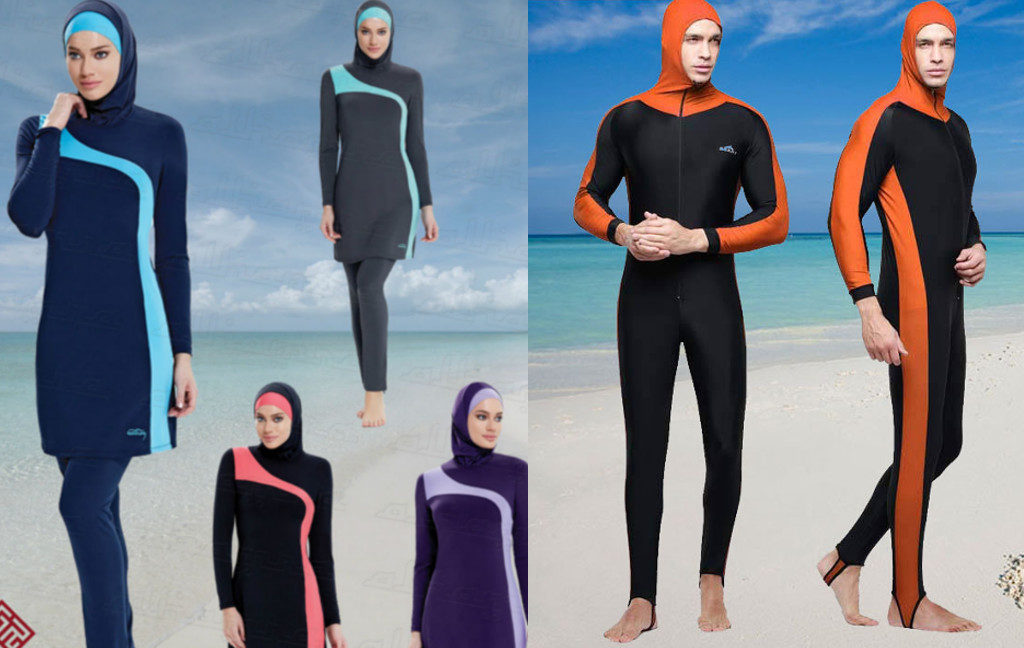 You can measure how bad a law is by what it looks like when you enforce it.

One obvious, but rarely mentioned, fact about law is that it means nothing except in its enforcement. A law that only exists on paper might as well not exist at all. Thus when the public demands a new law, it is asking for new law enforcement as well. Often, a law that sounds wise and principled in its conception (e.g. banning handguns), may look far better on paper than it does in the actual process of enforcing it (e.g. imprisoning poor black men on gun charges) After all, to “ban” something does not simply make it disappear, as by magic wand, but rather grants the government the power to inflict punishment on people who violate the ban.

Thus when some French resort towns banned the “burkini,” a wetsuit-like garment worn by some Muslim women, burkinis did not simply vanish from the country’s beaches. Instead, the ordinances produced the inevitable event that occurred this week in Nice: uniformed police officers gathered around a Muslim woman and demanded that she strip her clothing off in front of them. However reasonable a “ban” may sound at the abstract level, in its actual consequences (“having the police force women to take clothes off”) it may be far more extreme.

Critics have charged that the burkini ban is simply Islamophobia on the part of French authorities. French secularists, however, would insist that banning a particular clothing item, which they feel harms women (and which creates an ill-defined “public safety” concern) is distinct from banning a religion.

But when we look at the the necessity of enforcement, we see that it’s factually impossible for the process of applying the law not to involve a religious test. That’s because the burkini can’t be readily distinguished, in any principled way, from an ordinary wetsuit. Whether a woman’s full-body swimwear is a wetsuit or a “burkini” therefore depends entirely on how it is intended to be worn, rather than what parts of a person’s body are being covered up. The French towns are not, in fact, banning particular items or actions (like covering your arms), unless they would likewise enforce a universal wetsuit ban. Instead, they are banning covering your arms for reasons of religion. Nobody can argue, then, that the ban targets particular behaviors rather than particular beliefs, since whether a certain form of covering is a “burkini” depends entirely on the belief of the wearer.

The reality of enforcement also shows just how false the quasi-feminist defenses of the Muslim wetsuit ban are. French officials have insisted that Islamic dress constitutes the enslavement of women, and that religious body covering is incompatible with the French conception of women’s liberty. But it’s hard to reconcile a “female empowerment” defense with the reality of a law that involves quite literally policing women’s swimsuits. If it’s wrong to make women wear burkinis, it’s surely it’s just wrong to make them not wear burkinis, if the underlying principle is “women should be free of coercion.” (In fact, it’s obviously a far worse restriction, since requirements imposed by the state are far more coercive than those imposed by community convention.) And if someone believes that Islamic dress is a patriarchal form of oppression against women, then why are they using the police to harass the “victim” of that oppression (the woman upon whom the burkini is imposed), rather the perpetrator (the men who impose it)? Surely even on the theory that the burkini is enslavement, it makes little sense to harass and fine the enslaved person.

The French sometimes have an odd conception of freedom. As political scientist Corey Robin noted, the scene from the Nice beach evokes Rousseau’s notorious maxim that people will be “forced to be free.” From Robespierre to the burkini, the French conception of liberté has often seemed to entail very little actual liberty. 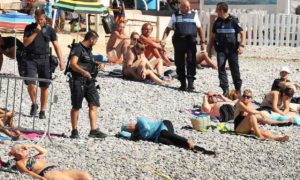 It’s unfair to blame an entire nation for a repressive policy. People are distinct from their governments, after all. But while we shouldn’t speak of “the French” as discriminatory and repressive, there are certain particular French people we can hold responsible. These include the dozen or so beachgoers that watched passively as the police surrounded and harassed the Muslim woman in Nice. (In fact, some of them did more than silently observe; they applauded the police and shouted ‘Go home’ at the woman, causing her daughter to burst into tears.) By making no effort whatsoever to support the woman, and gawking as the police made her display her arms, each of these people shamefully participated in a humiliating act of authoritarian bigotry.

The burkini ban is nonsensical in a hundred different ways. If one’s concern is, as the ban proponents say it is, with France’s national security, what purpose does it serve to have the police chase down Muslim women on beaches? Surely such a policy is more likely to enrage ISIS than to defeat them. And it’s certainly a small irony to see police in combat boots telling a barefooted woman that she is inappropriately dressed for walking on the beach.

Since all of its justifications collapse under a moment’s rational scrutiny, the bans cannot be made in good faith. Thus even someone disturbed by Islamic religious requirements for women’s body-coverings must conclude that it is prejudice, rather than principle, guiding France’s municipal governments. Far from freeing Muslim women from the tyranny of their own religion, the requirements are similar to the “self-deportation” proposals offered by American anti-immigrant activists: make it so impossible and miserable to live as a Muslim in France that all French Muslims must either cease to be Muslims or cease to live in France.

Anyone concerned with actual, rather than pretextual, feminism, can see how simple this issue is. As journalist Leigh Phillips noted, it’s very easy to be consistent in opposing both patriarchal religious practices and bigoted civil liberties restrictions: nobody should make a woman wear a burkini, and nobody should make a woman not wear a burkini. The consistent lover of liberty understands that Rousseau’s dictum is just as contradictory as it sounds; forced freedom isn’t freedom, because freedom is the absence of force. If feminism means anything, it means not surrounding women with police officers and demanding they take off their shirts. And once we get past vacuous abstractions about secular values and the national interest, there’s no way to see a wetsuit ban as anything other than a totalitarian absurdity.