Deporting Criminal Immigrants Is Both Unwise And Immoral 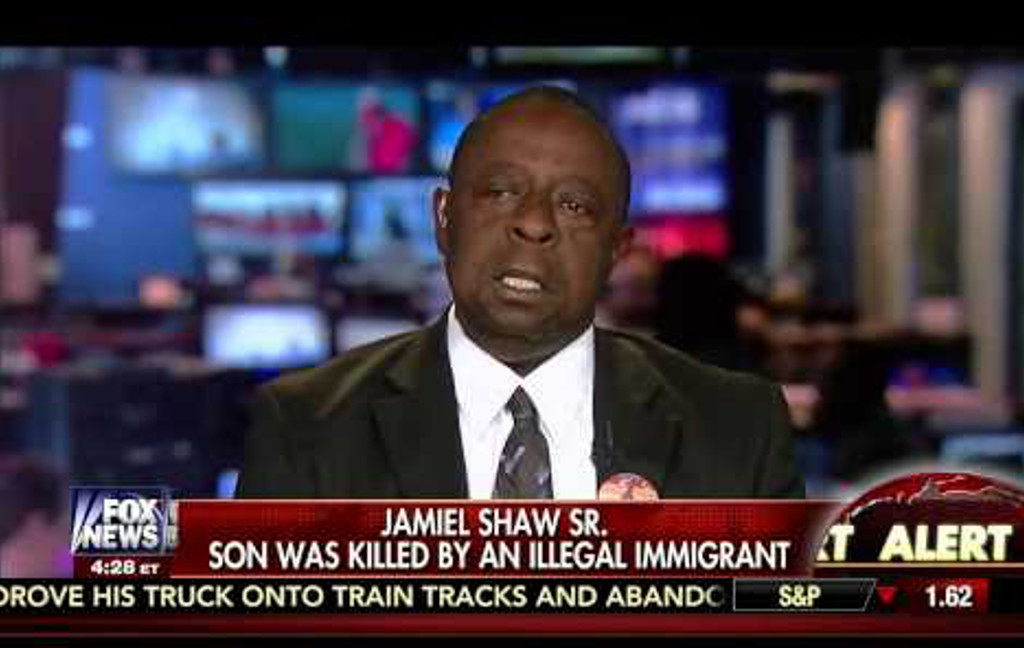 There’s a left-right consensus that immigrants who commit crimes should be deported. That consensus is a mistake.

“The killer was an illegal alien gangbanger from Mexico, released from jail with a deportation hold, three gun charges, and an assault and battery on a police officer… Only Trump mentions Americans killed by illegals.” So spoke Jamiel Shaw, Sr., the father of a black teenager murdered in Los Angeles in 2008, in a speech at the Republican National Convention last week. The facts of the case are harrowing: the 19-year-old killer, Pedro Espinoza, was a member of Los Angeles’s 18th Street Gang. The shooting was sudden and unprovoked, apparently prompted by the fact that Jamiel Shaw, Jr. had the misfortune to be wearing red, thereby resembling a member of the rival Bloods gang. Espinoza showed no remorse at trial. Smiling openly at his victim’s family members, he announced that he had no intention of paying any restitution money.

Most commentators would probably agree that Espinoza is exactly the kind of “criminal alien” who deserves to be deported. There is a broad left-right consensus that, no matter what one’s general opinion on immigration is, those who commit serious crimes ought to be expelled from the country. Though Espinoza had lived in the U.S. since he was an infant, he was born in Mexico and his presence in the United States was therefore a violation of the law.

As an unauthorized immigrant, Espinoza is far from typical, since immigrants are actually less likely to commit crimes than native-born Americans. It may therefore be fair for Trump’s opponents to argue that deliberately highlighting his particular story mischaracterizes the makeup of the immigrant population.

But even as they pointed to the lower crime rates among immigrants, many liberals would likely concede that Espinoza should have been deported. The progressive approach to immigration, after all, is to focus on “Felons not Families.” Espinoza was a sociopathic felon and gang member who murdered people over the color of their handkerchiefs. If the task is to get rid of the “bad” immigrants, he probably ought to have been the first one booted from the country.

Yet while deporting Espinoza seems instinctually smart and fair, it’s worth thinking twice about. Espinoza was briefly detained on an assault charge before he was released back into the community, at which point he encountered and murdered Shaw. The pro-deportation argument goes that, when Espinoza was first arrested and discovered to be undocumented, he should have been immediately shipped off to Mexico. But knowing for a certainty, as we do now, that Espinoza was capable of murder, we should consider whom he might he have abused or murdered in Mexico, had he been sent there. As Current Affairs has previously argued, deporting someone because we believe they might commit a crime means wishing that crime upon some victim in another country. And if Espinoza had murdered someone in Mexico, there would have been far less recourse for his victim’s family there—a 2016 study estimates that only 7 out of 100 crimes are reported in Mexico, and that of the crimes that are reported, only 4.46% result in convictions. In other words, it’s highly likely that Espinoza would have had the opportunity to harm a lot more people, had he been so inclined. That doesn’t mitigate the suffering of Jamiel Shaw’s family. But it’s important to be aware that ejecting criminal offenders from our territory doesn’t actually reduce crime; it simply foists it onto people elsewhere.

The deportation of criminals is also bad foreign policy. Espinoza was born in Mexico, but despite recent rhetoric about dangerous influxes of “Mexicans,” immigration from Mexico is actually down these days. Most of the immigrants apprehended on the southern border are actually Central Americans, predominately from Guatemala, El Salvador, and Honduras. Many of these individuals are quite literally fleeing for their lives: the murder rate in El Salvador is higher than in any country on earth that is not an active war zone.

The ever-increasing prevalence of transnational gangs, or maras, has been both a product and a driver of this violence. Young men in gang-controlled neighborhoods are effectively conscripted from the time they are children, and women and girls are routinely targeted for sexual violence. Businesses and households are made to pay “war taxes” to the gangs; rape, kidnapping, or murder of family members is a common tactic to coerce payment. People risk the dangerous overland journey across Mexico—a journey during which many travelers are robbed or even murdered, and approximately 80% of women and girls are raped—because they know they will incur few risks on their journey that they have not already faced on a daily basis in their own hometowns.

The Los Angeles street gang to which Pedro Espinoza belonged—the 18th Street Gang, known in Central America as “Mara 18” or “Barrio 18”—is one of the major transnational gangs that currently dominates the Northern Triangle. Their chief rival, MS-13, or Mara Salvatrucha, also has its origins in Los Angeles. The growth in those gangs has a lot to do with U.S. immigration and deportation policies. A number of Central American families, impoverished and traumatized by the horrors of civil war, fled to the U.S. in the 1980s and settled in Los Angeles, without immigration status. Their children were exposed to existing L.A. gang violence, and some of them joined gangs. Then, as young adults, these gang members were deported en masse to El Salvador and Honduras, countries many of them could barely remember: countries which were still fragile after decades of violence, undertaking the difficult work of political and economic reconstruction.

Banished from the U.S., the only home many of them had ever known, with few prospects for employment, these deportees predictably founded satellite branches of their Los Angeles gangs in their new Central American neighborhoods. Over ensuing decades, these gangs’ territorial battles spread across most urban areas, and have now penetrated outlying suburbs and rural counties as well. Today, there are a staggering 85,000 gang members active in the Northern Triangle. (To give some perspective, that’s nearly triple the estimated membership of ISIS.) Corruption within the police and in local government institutions is endemic, leading to a widespread culture of impunity. On the rare occasions when gang members are jailed for more than a token period of time, this has posed little obstacle to their operations: gangs exercise considerable internal control over prisons, and can direct subordinates and run telephonic extortion schemes from the inside. The chaos created by the gangs means that even crimes committed by non-gang members—rapes, murders, domestic violence, child abuse—are almost never prosecuted.

The fact is, when we deport criminals, vulnerable people in the receiving country suffer, often on a massive scale. Sending gang members to Central America means sending new recruits to Central American gangs. Those gangs then terrorize civilian populations. When that happens, the victims naturally run someplace where they think they will be safe—and often, that’s the United States. Deporting criminals doesn’t stop immigration. On the contrary, the mass deportation of criminal aliens to countries ill-equipped to deal with them generates a cycle of increasing numbers of refugees.

For some, that’s an excellent justification for sealing the border; let’s just deport all the criminals we currently have, then stop letting any new immigrants in. First, that’s unlikely to work.After all, the Border Patrol itself does not think the border is truly sealable, no matter how big and fancy a wall you build. More importantly, the moral implications of this strategy need to be fully appreciated. By attempting to seal ourselves off, and sending crime to other countries, we risk creating and then shutting our eyes to an unbelievable amount of suffering. Before anyone signs on to a Trumpian strategy, they should ask themselves whether they’re truly willing to condemn the men, women, and children in our neighboring countries to be brutally murdered by criminal organizations that are, in fact, our own country’s export.

So, if deportation isn’t the answer, what is? Is the United States supposed to become a warehouse for criminals that other countries don’t have the resources to incarcerate? Obviously that’s not a real solution. But we need to stop thinking about violence as a product of immigration, and start thinking about violence as an impetus for immigration.

To avoid deaths like that of Jamiel Shaw, it would be wise to examine domestic policies. The problem of kids joining gangs affects both immigrants and native-born Americans. Fixing it requires examining how social policies support or fail vulnerable children. Are mothers given the childcare support and paid leave they need to raise their kids well? Do parents have good jobs? Are schools providing children with adequate opportunities?

It’s also important to think about why people choose to leave Mexico and Central America, rather than simply trying to stop them from coming in (or casting them out once they’re here). If families were safe in their homes, if young men and women were growing up with satisfying employment, they wouldn’t have reason to attempt the perilous journey across the U.S. border. And we may have to ask ourselves a few highly discomforting questions. How, for example, are U.S. drug policies contributing to the success of Mexican drug cartels? And why did our State Department maintain a calculated neutrality in 2009, when a coup overthrew a democratically-elected government in Honduras?

Our approach to our neighbors is, at best, indifferent and disorganized; and at worst, opportunistically tailored to serve the short-term self-interest of a small elite. As always, thinking seriously about stopping crime means thinking about its causes. Those that truly care about deaths like that of Jamiel Shaw need to take into account the social factors that breed gang violence. One of those is U.S. deportations. Expelling criminal aliens may feel satisfying and just. But it doesn’t magically cause crime to disappear; it simply moves it around. And while U.S. citizens might not mind watching Central America collapse into violence, the consequences of that violence may well find their way back onto U.S. soil.