If You Want Solid Evidence That Clinton Is Corrupting the Political Process, Here It Is 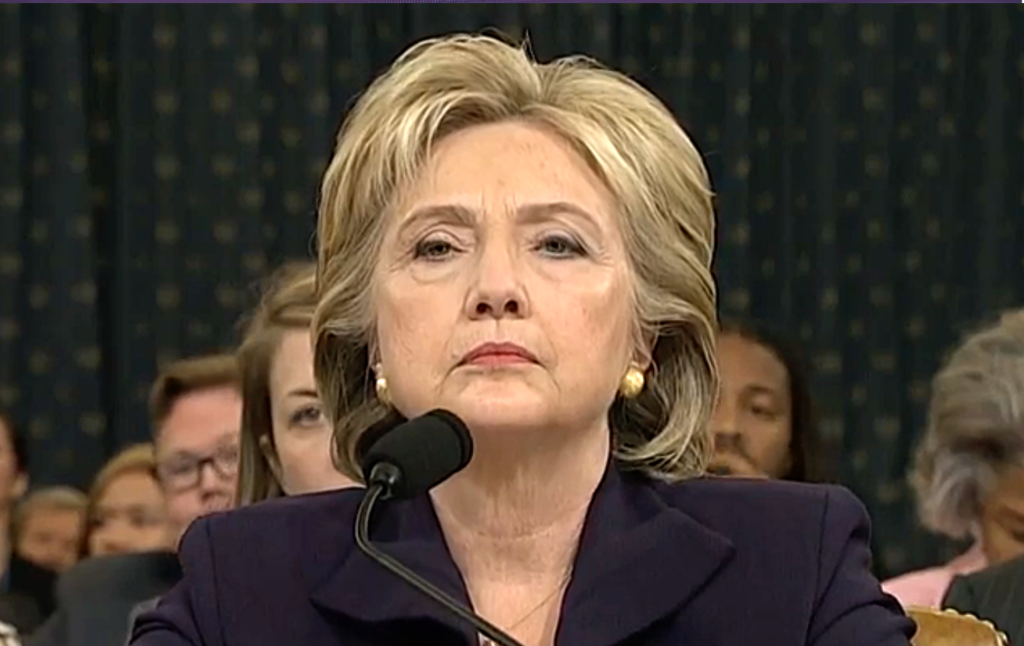 Whenever Hillary Clinton is accused of being a shady politician, who uses underhanded and unscrupulous methods, her supporters become extremely defensive. They say that all such allegations against Clinton are simply products of the right-wing noise machine, and that if Clinton is seen as venal and conniving it is almost certainly due to sexism rather than anything Clinton has actually done. Longtime Clinton operative David Brock has argued that when you get down to it, all of the scandals and allegations surrounding Clinton are little more than “nothingburgers.” Salon’s Gary Legum says there are simply “credulous people willing to believe any variation of legerdemain, no matter how irrational and absurd, if the name ‘Hillary Clinton’ is attached to it.”

But a new report offers hard evidence that Clinton’s campaign is, in fact, engaged in some of the most underhanded and antidemocratic practices that afflict our political system. In fact, Clinton’s campaign is engaged in precisely the kind of money-driven secrecy and subversion that Democrats have long insisted were wrecking American politics.

According to the Daily Beast, a pro-Clinton SuperPAC called “Correct the Record” has spent $1 million “pushing back against” Bernie Sanders supporters on social media, “addressing” thousands of people on Facebook, Twitter, Reddit, and Instagram. What this amounts to in practice is creating hundreds of fake accounts, which then place campaign propaganda all over the web as if it came from ordinary supporters. This group is spending a fortune unofficially intervening in social media conversations, without other users knowing that the messages are being funded by a SuperPAC.

This practice is known as astroturfing (as in “fake grass-roots”), and it’s long been deployed by the more disreputable corporate marketers. (Versions of it have been used by Big Tobacco, the gas industry, and campaigners against teachers’ unions.) Companies will have astroturfers fill comments sections and social media, pretending to be ordinary members of the community, while they are in fact simply shilling for their employer. As Adam Bienkov of The Guardian defines it, astroturfing is the attempt to create an impression of widespread grassroots support for a policy, individual, or product, where little such support exists. Multiple online identities and fake pressure groups are used to mislead the public into believing that the position of the astroturfer is the commonly held view.

When done subtly, astroturfing makes it difficult to trust who is on the level, and means that one’s whole impression of an issue or movement may be completely distorted. It’s extremely pernicious, because it means nobody knows when they’re having an honest conversation, versus when they are being carefully manipulated by a well-funded public relations campaign. At its worst, it can totally destroy people’s abilities to have open conversations online (the effort involved in controlling it is one of the key reasons why Current Affairs does not have a comments section). As one Reddit user explained:

Astroturfing makes me angry. It should make you angry. It should make you fucking well see red. It’s marketing evolved into something incredibly scary, sophisticated, and evil. It’s essentially thought warfare, or psychological warfare, which takes away much of what was supposed to make the internet a new and beautiful frontier of communication. Worse yet, if you actually identify and approach these operatives, they’ll gaslight you and deny that they are such an operative. These are people who are paid to psychologically abuse you. Do you get this? It’s an ugly and evil thing, and not only does it take away our ability to take information and fact at face value, but it takes away our ability to take opinions, feelings, and personal stances at face value as sincere and legitimate.

Funding these kinds of covert online propaganda efforts has long been one of the most devious methods of affecting the public conversation, generally favored mostly by corporations and dictators. In Paste Magazine, Shane Ryan helpfully points out that these are the exact tactics employed by Vladimir Putin, whose government hires “hundreds of Russians to post pro-Kremlin propaganda online under fake identities, including on Twitter, in order to create the illusion of a massive army of supporters; it has often been called a ‘troll farm.’”

There’s a reason such tactics are most closely associated with Putin: they are deeply Orwellian and corrosive of a democratic political process. Ryan explains why this is effective: it “muddies the waters” by turning online political activism into a totally unnavigable morass. In the case of Putin, for every anti-Putin hashtag, the trolls spread a pro-Putin hashtag; so what was originally a grassroots anti-Putin movement on social media began to look like just one movement among many. Likewise, only Bernie Sanders has a strong movement on social media, but through flooding the internet with fake Clinton support, one can make it harder for the opposition to organize, and distort the impressions of how people actually feel (which will inevitably end up filtering into the resulting media coverage).

This well-funded astroturfing campaign is not the only way the realities of social media have been manipulated to create favorable impressions of Clinton; an entire media narrative sprang up based on false instances in which Bernie Sanders supporters were supposedly engaged in acts of mass, coordinated harassment. But whereas that was done by individual Clinton-supporting journalists, the astroturfing efforts are being funded on a large scale with the approval of the campaign itself.

Of course, ordinarily a campaign isn’t technically responsible for the actions of an independent SuperPAC. After all, SuperPACs are limited by rules that prohibit coordinating with the candidates themselves. These rules may be somewhat meaningless in practice, but they do mean that candidates can theoretically be held blameless for actions taken by independent groups on her behalf. But here’s where an even more pernicious aspect comes in: the “Correct the Record” group actually does coordinate with the Clinton campaign, exploiting a loophole in campaign finance regulations. This is so antithetical to the spirit of the rules that the Daily Beast reports that it “befuddled many campaign finance experts, who noted that super PACs, by definition, are political committees that solely do independent expenditures, which cannot be coordinated with a candidate or political party.” The experts explained that:

…the relationship between the campaign and the super PAC would test the legal limits. But Correct the Record believes it can avoid the coordination ban by relying on a 2006 Federal Election Commission regulation that declared that content posted online for free, such as blogs, is off limits from regulation. The “Internet exemption” said that such free postings do not constitute campaign expenditures, allowing independent groups to consult with candidates about the content they post on their sites. By adopting the measure, the FEC limited its online jurisdiction to regulating paid political ads.

So Correct the Record is actually “testing the limits” of finance restrictions; a lawyer for the Campaign Legal Center has said that these tactics are “creating new ways to undermine campaign regulation.” That means that even the Koch brothers haven’t used this kind of novel subversion of the SuperPAC rules.

All of this confirms a point recently made by Glenn Greenwald: Clinton’s supporters, and the mainstream Democratic party generally, have shown themselves massively hypocritical on the subject of campaign finance. They have decried Citizens United and the influence of SuperPACs on politics, yet when it comes to the Clinton campaign itself, they are more than willing to excuse the behavior they condemn when it is done to support Republicans.

Greenwald says that this is also especially evident when Clinton’s supporters attempt to justify her donations and speaking fees from Wall Street: the argument Democrats usually make is that corporate money in politics is inherently corrosive, regardless of whether there is a quid-pro-quo arrangement whereby a candidate promises a specific vote in exchange for a specific donation. But when it comes to Clinton, her supporters insist that in the absence of proof that she specifically cast a particular vote in exchange for a particular donation, there is nothing unobjectionable about corporate support for her campaign.

This kind of shift, in which Democrats change their minds about shady practices when they are being done by the candidates they like, has been evident throughout the Clinton campaign. A small but revealing instance occurred in Wyoming, a state which Bernie Sanders won, but not by the same overwhelming margins as he did in some other Western states. Explaining the smaller margin, “a Clinton campaign aide said their ‘secret sauce’ in Wyoming was the state’s onerous vote-by-mail rules that required anyone voting by mail to have voted as a Democrat in the 2014 midterms.” “Secret sauce” is a telling phrase; the Clinton campaign seems downright pleased at the existence of “onerous” voting rules. Ordinarily, Democrats see onerous voting rules as an impediment to the expression of the popular will; the entire apparatus of Jim Crow-era voter suppression was built on onerous voting rules, and it is the stated policy of the party that voting should be as straightforward and inclusive as possible. But the moment self-interest and principle conflict, it is principle that gets tossed overboard; when such rules favor one’s preferred candidate, suddenly they are no longer an unjustified bureaucratic obstacle but a delicious “secret sauce.” All of which raises the question of whether Democrats will only particularly care about voter disenfranchisement when it’s their own voters being disenfranchised.

The “Correct the Record” project should disgust anyone who values open participatory democracy. It’s sinister for two reasons: first, astroturfing is a psychologically manipulative attempt to use money to distort the process of political deliberation. It represents the worst kind of cynical politics, a politics that instead of building support the hard way, simply buys it. (One senses that an aide told Hillary Clinton “Madam Secretary, Bernie Sanders seems to have lots of grassroots support online,” to which she replied “Hmm, that’s what we need. Get me $1 million worth!”) Second, it constitutes a total repudiation of the supposed “progressive” stance on campaign finance and SuperPACs. Clinton’s campaign is not only not trying to curtail SuperPACs, but is quite literally trying to push the possibilities for SuperPAC expenditures to their very outer limits, breaking new ground in undermining campaign finance laws. Any Democrat with an ounce of loyalty to their stated principles on money in politics should be willing to acknowledge this for what it is: a blatant example of the corrosion of the political process, one that seriously casts doubt on Hillary Clinton’s desire to clean up that process.