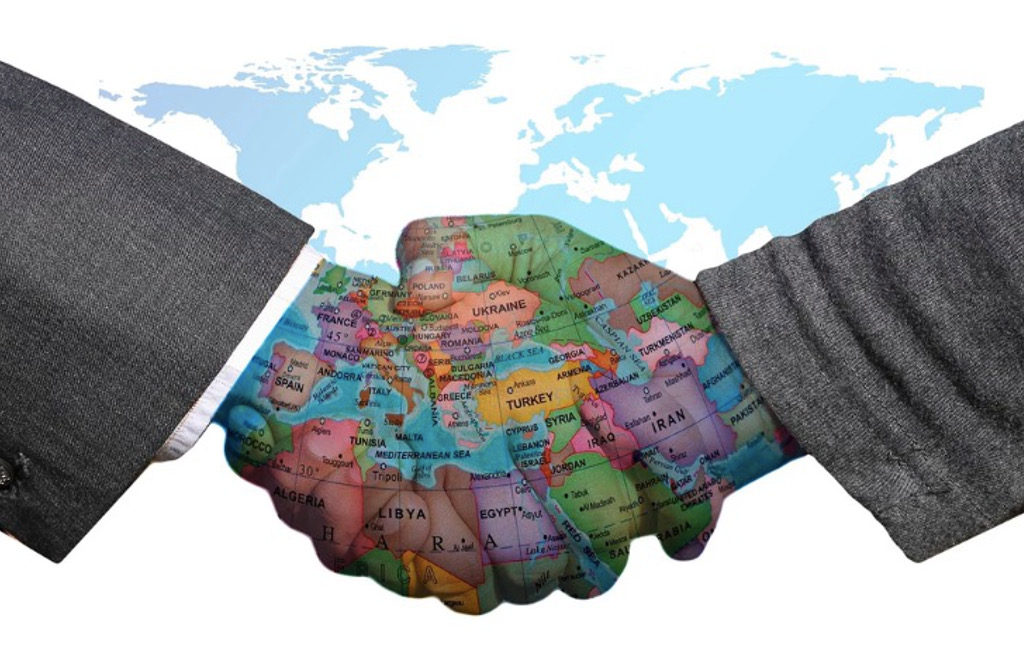 Some principles for better relationships with the world…

Over the past few years, democratic socialists have rightfully spent a considerable amount of time honing their arguments on domestic policies, such as healthcare, education, and criminal justice reform. Bernie Sanders’ Our Revolution and Bhaskar Sunkara’s recently released The Socialist Manifesto are two good examples of this focus on the domestic. On the foreign policy end, however, confusion still persists concerning what a democratic socialist foreign policy might look like.

While Democrats and Republicans have often clashed over domestic policies regarding hot topics such as tax rates and reproductive rights, much of their foreign policy ambitions and perspectives have remained the same. Given these dynamics, should American foreign policy look any different under a democratic socialist president, such as—oh let’s say—Bernie Sanders?

Socialism primarily refers to an economic system, one that ensures equal access to societal resources and services such as water, transportation, electricity, and healthcare, and a system that seeks to truly enfranchise poor and working-class populations. The blueprint for what a socialist society might precisely look like as a living alternative to a capitalist society, however, has been much contested. The usage of democratic socialism serves to distinguish one model from the Soviet Union and some other nominally socialist countries such as China, Cuba, and North Korea. For democratic socialists, honest socialism cannot exist without democracy (and vice versa).

A democratic socialist foreign policy will therefore arise from a truly democratic approach to politics and social life. This will mark a tremendous divergence from the traditional approach taken by most Democrats and Republicans: While often whitewashed under the name of democracy, American foreign policy has usually been undemocratically administered, often unilateral, thoroughly interventionist, and sometimes covert.

First, we must recognize that U.S. foreign policy has been developed and carried out by a relatively small set of elites who have faced little accountability. U.S.-led wars and acts of military aggression are often implemented with little involvement from Congress, and, more importantly, with no direct input from citizens. At the outset of the (2003) war in Iraq, massive and historically unprecedented protests took place throughout the country. Citizens, however, had no formal say in the decision-making process involving war and peace.

As it currently stands, the executive branch—in what many have termed “the imperial presidency”—has assumed nearly full control over the decision-making process involving the use of U.S. military force. Theoretically, with the passage of the War Powers Act in 1973, the executive branch is supposed to consult with Congress and receive authorization for, in the least, extended deployments involving the use of force. Presidents from both the Democratic and Republican Parties, however, have routinely circumvented the War Powers Act—using the CIA to carry out covert missions, reinterpreting the definition of warfare and hostilities (see: Obama on Libya), or just defying the legislation altogether. In the least, democratic socialists need to reassert the importance of Congress within the decision-making process concerning foreign military affairs. More importantly, though, democratic socialists should also assert the role of citizens in these processes.

When it comes to war and acts of aggression, democratic socialists would do well to propose a final, citizen check on these measures. Before the United States could commit soldiers abroad, these actions would require citizen approval. In doing so, the executive and aligned politicians would be required to not only convince congressional members of the necessity of their proposed forays, but also the citizens themselves, who are, of course, the individuals who end up fighting and dying over such policies. Citizens would effectively serve as a separate branch of power that might balance elite decision-making concerning war. As wars might be popular among citizens at particular points in time, this, of course, is in no way a perfect solution for scaling back U.S. imperialism. However, in the least, it involves a veto point for citizens to terminate warfare, as well as a democratic inroad for citizen decision-making upon the most consequential aspect of U.S. foreign policy.

Third, it’s not only high-profile military endeavors that comprise U.S. foreign policy efforts (though it does often appear that way). U.S. state groups such as the National Endowment for Democracy (NED) and the U.S. Agency for International Development (USAID) provide funding and technical support for political parties, social movements, and non-governmental organizations (NGOs) across the world. Much of this work was indeed formerly carried by the CIA during the Cold War, albeit in a much less formal manner, wherein the CIA covertly funneled financing to political parties of its choosing. As it stands, both the NED and USAID face very little oversight, with unelected state functionaries selecting political parties and NGOs abroad for U.S. taxpayers to fund. It is true that through these organizations, the United States funds some human rights groups that justly document serious abuses and provide their own check on state powers abroad. However, these two agencies have often been used to funnel resources to political parties that aim to displace governments whose only serious transgression has been their rejection of U.S. global leadership and neoliberal capitalism, such as the Morales government in Bolivia. Such interventionist behavior, wherein the United States attempts to distort the playing field by supporting one party over others—and in doing so, often violates domestic legislation in other countries—should be entirely prohibited.

In addition, if U.S. taxpayers were asked whether their tax dollars should support human rights organizations and other NGOs abroad, would they agree with such allocations? Maybe. But they should have a say over how the money is spent. As it stands, NED and USAID are provided annual congressional allocations and are generally allowed to fund any project of their choosing with little oversight or discussion over their activities. And it remains true that some of the NGOs that the U.S. has historically funded have become so aligned with opposition political parties that they are indistinguishable from partisan endeavors, such as Súmate in Venezuela, which collected signatures to recall former President Hugo Chávez from office and has served as a training ground for opposition politicians, such as María Corina Machado. At the least, Congress should hold regular debates and regular votes on funding for organizations in countries abroad, that is, instead of outsourcing this significant state function to unelected state functionaries.

Finally, democratic socialists should articulate a vision of foreign affairs that truly places human rights and democracy above other interests. These latter interests should not allow for alignment with despotic governments that rule with impunity, such as Saudi Arabia, Hungary, and the Philippines. This doesn’t mean the United States should cut off all economic and trade relations with countries and impose economic sanctions, as these moves punish the same individuals repressed by their own rulers. However, it does require that U.S. leaders make clear that they stand for the ability of citizens throughout the world to determine their own futures, and that the United States won’t provide support for governments that use resources to repress their own citizens. Beyond widespread economic sanctions and military incursions, the U.S. foreign policymaking community possesses a range of diplomatic tools for dealing with authoritarian and undemocratic regimes, including, for instance, public condemnation, working through the United Nations on multilateral solutions, placing travel sanctions on individual leaders, freezing assets, and conditioning aid upon human rights improvements.

Too often, though, U.S. leaders have spurned the hard work of diplomacy in favor of violent approaches seemingly designed to curry domestic support. U.S. citizens are routinely told they have the strongest military that can tackle any obstacle throughout the world. Students are force-fed stories of military success all through their school years. Warplanes fly over baseball stadiums in celebration, and citizens make a habit of visiting warships, including my city’s main tourist attraction. We are a nation seemingly exhilarated by warfare, but perhaps a more open debate, and one involving citizen input on war-making, might spark some serious soul-searching on the issue and help to amplify voices critical of these endeavors when crucial decision-making moments arrive.

These four measures aren’t the only reforms that democratic socialists should embrace. The example that the United States presents before the world—with its Electoral College, continual gerrymandering efforts, and partial pursuit of measures that ultimately reduce democratic participation, such as voter identification laws and anti-felon voting laws—should be considered and reformed. As democratic socialism gains support, we will need to seriously reconsider the foundation and workings of U.S. foreign policy, and articulate reforms that truly allow for—above all—a democratic and socially just approach to policymaking.

Timothy M. Gill is an assistant professor of sociology at the University of North Carolina at Wilmington, and author of the forthcoming edited volume The Future of U.S. Empire in the Americas: The Trump Administration and Beyond (Routledge Press) out in February 2020.