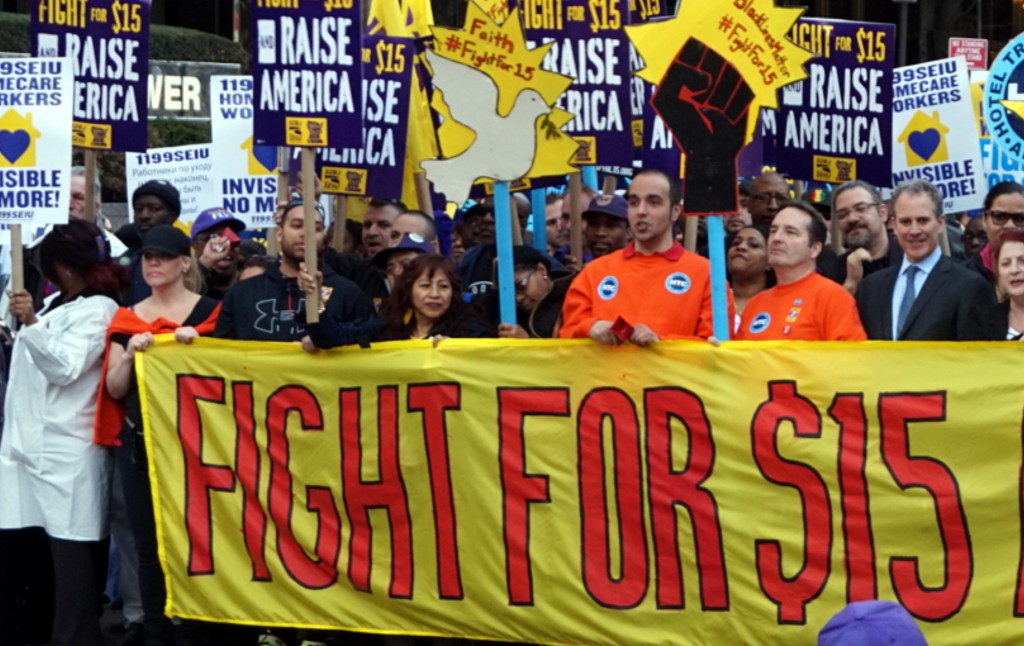 Andrew Puzder is the former restaurant industry CEO (Hardees/Carls Jr) who was briefly nominated to be Donald Trump’s Secretary of Labor. He has also written a new book called The Capitalist Comeback: The Trump Boom and the Left’s Plot to Stop It, which is of interest to me because I’ve got an upcoming book called Why You Should Be A Socialist. (If anyone wants to arrange a debate between me and Puzder, I think the results would be amusing.) In a new op-ed for the Washington Post, Puzder claims that Elizabeth Warren poses an “economic threat” to the United States. Puzder says Warren’s support for a $15 federal minimum wage is ludicrous and that she is trying to “kill” the booming economy. He writes:

Warren proposes increasing wages with a federally mandated $15 per hour minimum wage — up from $7.25. But in a report that came out two weeks before Warren’s July 22 essay, the Congressional Budget Office found that a proposed $15 minimum wage would actually reduce household income by $8.7 billion in the year it took effect (after a gradual annual increase). Keep in mind, that loss is for one year. How could an increase in the minimum wage undermine incomes? According to the CBO’s median estimate, the increase would have the effect of killing 1.3 million jobs, increasing consumer prices and reducing economic growth. In effect, $8.7 billion in family income would simply disappear into the progressive economic ether. A proposal that would reduce household income for everyone by $8.7 billion as a means to increase wages for some Americans is absurd.

Here is my advice any time some free-market type cites a report from a relatively neutral authority: Go and look at the report yourself, because they’re probably going to be burying inconvenient facts. When I looked at a couple of random things from the Cato Institute, for instance, this is precisely what they turned out to be doing. Puzder is no different. “I bet if I open that CBO report there’s going to be more to it than that,” I said to myself. So I opened the CBO report and…

In an average week in 2025, the $15 option would boost the wages of 17 million workers who would otherwise earn less than $15 per hour. Another 10 million workers otherwise earning slightly more than $15 per hour might see their wages rise as well. But 1.3 million other workers would become jobless, according to CBO’s median estimate. There is a two-thirds chance that the change in employment would be between about zero and a decrease of 3.7 million workers. The number of people with annual income below the poverty threshold in 2025 would fall by 1.3 million. The $15 option would alter employment more for some groups than for others. Almost 50 percent of the newly jobless workers in a given week—600,000 of 1.3 million—would be teenagers (some of whom would live in families with income well above the poverty threshold).

Okay, you should already have seen enough to know that Puzder is completely discredited and can’t be trusted. Any sensible discussion of the minimum wage involves considering “trade-offs”: both the gains and losses from the policy. Puzder talks about the job loss statistic without talking about the 17 million people who would see their wages rise, the additional 10 million who could also see wage gains, the 1.3 million people who would be lifted out of poverty, or the fact that people at the poverty line, people just above it, and people up to six times the poverty threshold would see either positive income effects or no effect.

If you brandish a job loss statistic, but do not note that some of the people who lose their jobs “would live in families with income well above the poverty threshold,” while an equivalent number of people would no longer be poor, nobody should ever listen to anything you have to say about the minimum wage. The effects of minimum wage increases are hotly debated, and the CBO’s report actually emphasizes just how uncertain its predictions are. But in order to even begin to have a conversation about it, we need to ignore right-wing CEOs who bury all of the statistics that are inconvenient for their argument.

We have to be very careful in evaluating empirical claims about the effects of minimum-wage laws (as opposed to justice-based claims, e.g., no employer should be permitted to pay less than a living wage because that’s a monstrous thing to do, which should be self-evident). People’s politics obviously have a strong likelihood of coloring their selection and interpretation of the data.

For example, a new study from the National Employment Law Project of the $15 minimum wage in the New York restaurant industry said the following:

This is the first assessment of restaurant employment and earnings over the entire period of New York City’s historic minimum wage increases. Contrary to fears of massive job losses, $20 Big Macs, and shuttered restaurants, we found a thriving industry. During this period, New York City has seen a strong economic expansion of the restaurant industry, outpacing national growth in employment, annual wages, and the number of both limited- and full-service restaurant establishments. The restaurant industry has the highest proportion of workers affected by the minimum wage of any major industry. The New York City restaurant industry has maintained substantially faster job growth than the private sector overall in the years since the State minimum wage rose in phases from $7.25 an hour at the end of 2013 to $15.00 at the end of 2018… New York’s rising minimum wage has tremendously benefitted low-wage workers… New York City workers in the lowest-paid three deciles of the wage distribution have seen inflation-adjusted wage gains of 8.5 to 15 percent since 2013 (the largest wage gains for these workers in the last 50 years). Wage gains among restaurant workers have been even stronger, with 2013-18 real wage increases averaging 15-23 percent for full-service and 26-30 percent for limited-service restaurant workers.

At the same time, you have articles like “New York City’s $15 Minimum Wage Is Now Officially a Disaster,” which say things like this:

Cuomo claims to have created the bill with “the needs of workers and businesses alike” in mind, but a lot of business owners in the boroughs beg to differ. They say the extra money comes with an unforeseen cost: higher good prices, fewer working hours and layoffs. “Many people working in the restaurant industry wanted to work overtime hours, but due to the increase, many restaurants have cut back or totally eliminated any overtime work,” Andrew Riggie, executive director of the New York City Hospitality Alliance, told Fox News.

And this one from the Wall Street Journal, “New York City Businesses Struggle to Keep Up After Minimum Wage Increase“:

Business leaders and owners say the increased labor costs have forced them to cut staff, eliminate work shifts and raise prices. Many business owners said these changes were unintended consequences of the new minimum wage, which took effect at the beginning of the year. Susannah Koteen, owner of Lido Restaurant in Harlem, said she worries about the impact raising wages could have on her restaurant, where she employs nearly 40 people. She hasn’t had to lay off anyone, but the increase has forced her to cut back on shifts and be more stringent about overtime.

I’d like to note something about these last two sources, though: “Business leaders say” should not ever be considered any kind of evidence about the effects of minimum wage laws. This is because business leaders have an incentive to outright lie, since they don’t want to have to pay their workers more, and are obviously going to tell you that if you raise the minimum wage they’ll have to lay off workers. Not only that, but they’re always going to use the language of “forced”: We were “forced” to cut staff. This is only ever plausible if the business owner themselves is making the exact same amount of money as their staff. If the business owner is making more, then nobody “forced” them. They chose to offset the increased wage costs by firing people or cutting back shifts, because they didn’t want to make less money themselves. Remember this important rule of economics: So long as the owner is still driving a better car than you are, it is not the case that they could not possibly pay their workers more.

Frequently we have “a study” on the one hand and “business owners say they’re worried” on the other. (Though the first business owner the WSJ talked to said actually she hadn’t had to lay anyone off.) Now, that’s not to say that minimum wage increases do not produce job loss. They may and they may not. The anti-minimum wage argument is that if you raise the minimum wage, employers “will” reduce hours and fire people. But sometimes that’s not actually possible. If I run a cafe, and there are two employees (one at the counter and one in the kitchen), and I can’t actually make one person do both tasks, then I can’t actually cut back hours or staff. I’ll have to grumble and accept the increased labor costs. Of course, I could pass the costs on to customers by raising prices, but perhaps that’s not possible either, because raising prices would drive everyone to the cafe next door. In that case, I will just have to take less money for myself.

As a socialist, I actually have no doubt that free market types are right when they say employers try to make up for the increased minimum wage by firing a bunch of people and just sucking more labor out of the remaining workers. Because employers are profit-maximizing sociopaths, they will always try to cause the workers and the consumers to bear the burden rather than themselves. Free market types think that this proves minimum wage increases can be bad. I think it proves that capitalists are amoral monsters and worker ownership is essential. If it is true that minimum wage increases hurt workers, that is because employers would rather hurt workers than take any less of a portion for themselves.

The Fight For $15 campaign has been incredibly successful at getting a living wage on the national agenda. The more they succeed, the more you’re going to see the kind of dishonest talking points that Puzder is pushing. (The Washington Post really should be shamed for publishing things like this. It shows you how little op-eds are edited that nobody at the paper said: “Okay, but Andy, you can’t just cite the layoffs without also noting the other parts of the report.”) Of course, the CBO’s analysis might be perfectly correct about a small percentage of Americans losing work because of a minimum wage increase. That just makes it all the more urgent that we make sure workers themselves control workplace decision-making.