An Oral History of Cryptid Currency 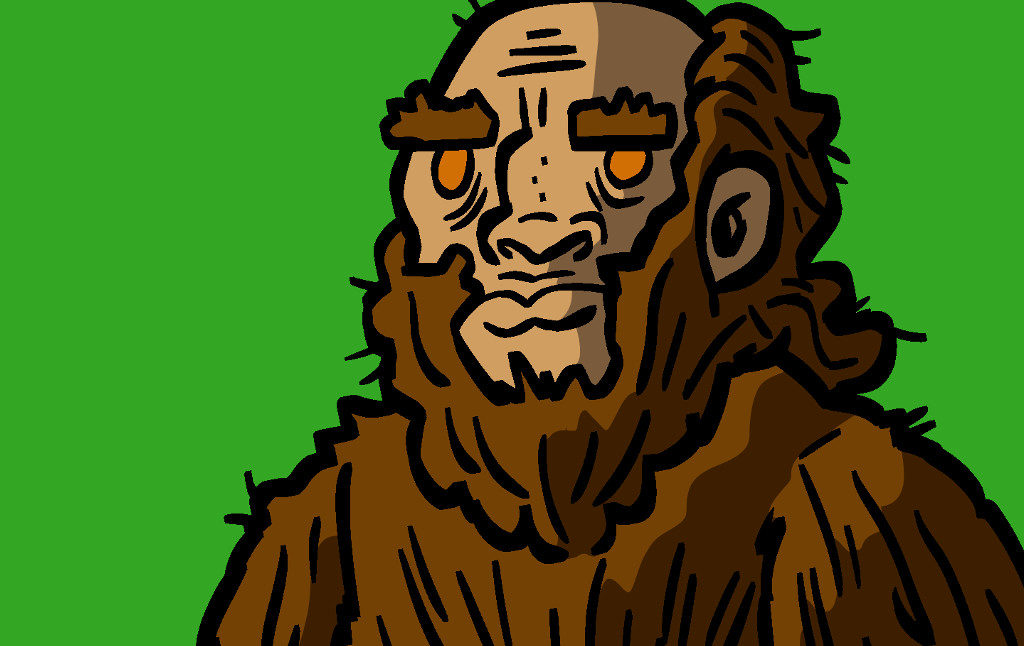 Even mythological creatures have had to adapt to the gig economy…

For years, economic instability, increasing wealth inequality, and the stagnation of the average wage have contributed to a job market where struggling and exploitation are normalized as “hustling.” We’ve all read enough profiles of ordinary people who have been affected by the tightening margins for comfortable living to fill the lobster tank in Jeff Bezos’s limousine. But there is a demographic whose adaptations to this reality have been overlooked by virtually every news outlet… until now.

I happen to run several geocities websites with green text on a black background. I use these websites to keep tabs on one of our country’s most obscure groups: Cryptids. With my unique resources, I was poised to conduct the first survey ever of these individuals, and see how they are coping with this fractured labor landscape.

Thankfully Current Affairs responded to my emails, phone calls, and hand-delivered manifestos written on the inside of those cardboard sleeves you microwave Hot Pockets in, and allowed me to use their platform to publish this important and unprecedented investigation.

I got in touch with Bigfoot via snail mail, sending an interview request to a post office box in Gardner, Colorado. He responded quickly, suggesting a stump we could meet at. My editor reluctantly granted me a travel stipend, and I flew out to see him. He was already waiting at the stump when I arrived. He had set out a dented can of La Croix and a raw deer leg for me. His manner was thoughtful, solitary—it was clear that he did not socialize often. After some halting small talk, he told me his story.

“Well, originally I had a good thing going. Someone took that picture of me, you know the one, I’m walking like this—”  he mimed the infamous Bigfoot lope “—and it just blew up. So I made a website, started charging restaurants and supermarkets a fee for me to get ‘caught’ eating out of their dumpsters by the local news. That was working pretty well for a while. Then I break into a cabin that has a TV in it, turn it on to see who’s the President now and if there’s any new Law & Orders, and I see some guy dressed like me in a beef jerky commercial. The bubble had burst. Now there’s a hundred Bigfoot impersonators out there. I’m a little older than all these guys, and I just don’t have the energy to compete anymore. Nobody cares if they’ve got the real thing or not. That’s the way it is, I guess.”

My interview with Mothman was a happy accident. I ordered a box of beef jerky online after my meeting with Bigfoot left me with a guilty craving I couldn’t shake. On the day of the delivery, I kept getting notifications that my delivery window was changing. It wasn’t until 1:00 am that my neighbor’s Affenpinscher began howling and I heard the unmistakable thump of 10 pounds of beef jerky hitting the ground outside my door. I checked my doorbell camera and saw an impossibly tall, dark figure turning to leave. I ran to the door, my heart pounding, threw it open, and there he was: the Mothman, of the infamous Prophecies. I invited him inside, but he demurred, saying that he had more deliveries to complete. I managed to convince him to give me a quick statement, in exchange for $20.

“I’ve been doing a lot of deliveries. It’s fine as long as the recipient isn’t home. People freak out when I show up because they’re expecting a guy or at least a drone and not an 8-foot tall humanoid moth with glowing red eyes. Look, I gotta go, I’ve got 10 hot pizzas and a pound of weed strapped to my back.” 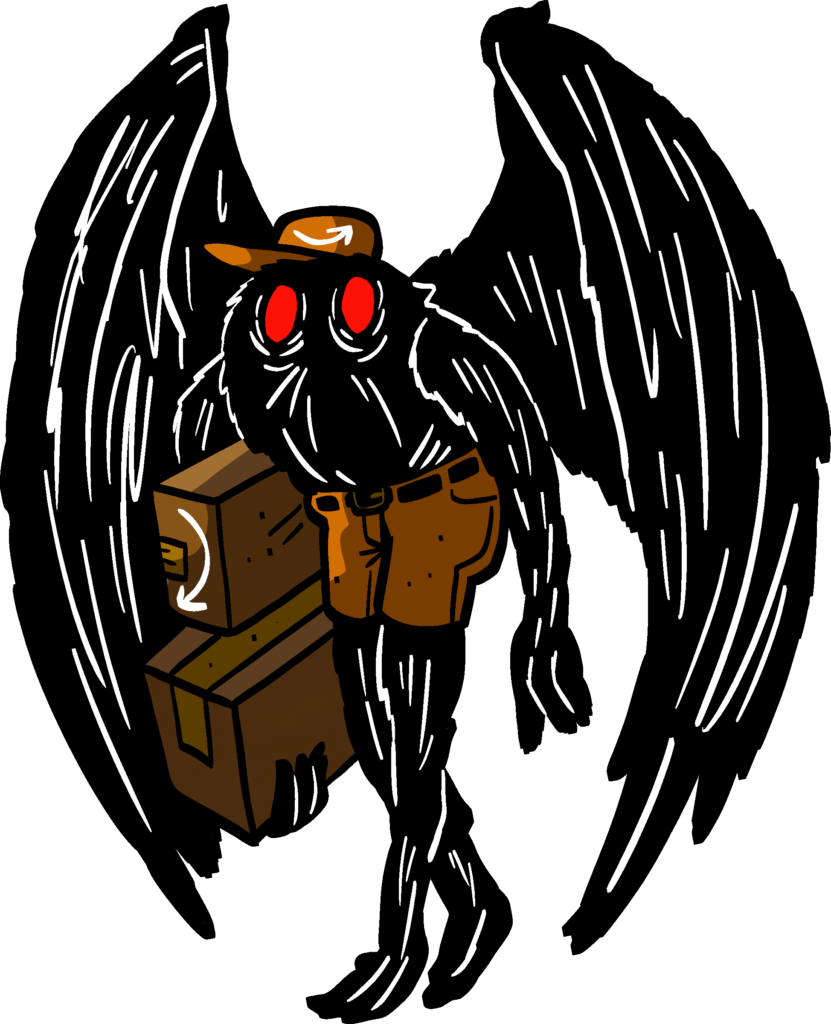 The Jersey Devil is the only subject who reached out to me. I am not sure how she heard about the article, but I received a two-paragraph long text message from her forcefully suggesting we get lunch at a glass-walled salad restaurant. When I arrived she was taking a photograph of her used napkin. I tried to get her to address some prepared questions, but she steered the conversation.

“First of all, so amazing of you to reach out to me and seek my perspective. I love sharing my learned experience. I’m so exhausted from doing promos for my new book, The Devil You Know. It’s coming out in September. I haven’t written it yet but then again I’ve done the hard part already: fucking living it.”

I cut in to ask her about a recent article that had been making the rounds claiming that her born-and-bred Jersey credentials may be falsified.

“That article about me? Oh, you read it? I suppose everybody did. I wouldn’t call it an exposé as much as…. Jealousy, I guess? Cryptids taking down other cryptids? It’s sad actually. I mean, does my accent sound fake to you? Will you excuse me? My agent and manager are calling me at the same time. Wonderful talking to you, perhaps I can get you discounted tickets to my book tour? You can bring a plus one but only if they’re an accomplished videographer who can film it without the bookstore’s permission. Ok bye, love you! You inspire me!” As she ran out the door, I realized that she’d left me with the bill. 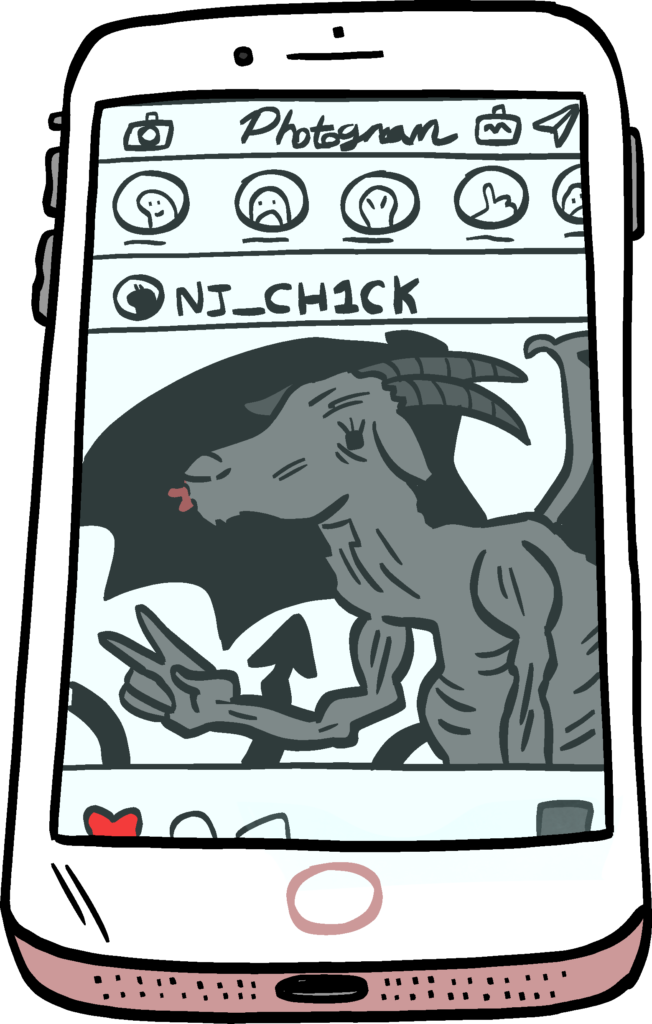 Getting in touch with the Yeti was more difficult. I finally found his phone number on Craigslist, in a for sale listing for a used CPAP machine. He was gruff on the phone, and almost hung up when he realized I was not interested in buying the machine. Ultimately, he agreed to give me a quote via email, on the condition that I do not publish his location. He wrote:

“Mondays, Wednesdays, and Thursdays I do dog-walking. Tuesdays, Fridays, and Saturdays I work at Home Depot. I do Uber most nights. People give me a low rating because I keep the car cold. I like it cold. I don’t see what the problem is, it’s my car. If they want the car hot they should buy their own car. I like dogs more than people but my health insurance is expensive because of my reverse altitude sickness and various other complications resulting therefrom so I have to keep doing the driving. And people complain about dog hair in the car. I do not let the dogs inside the car. That is my hair.” 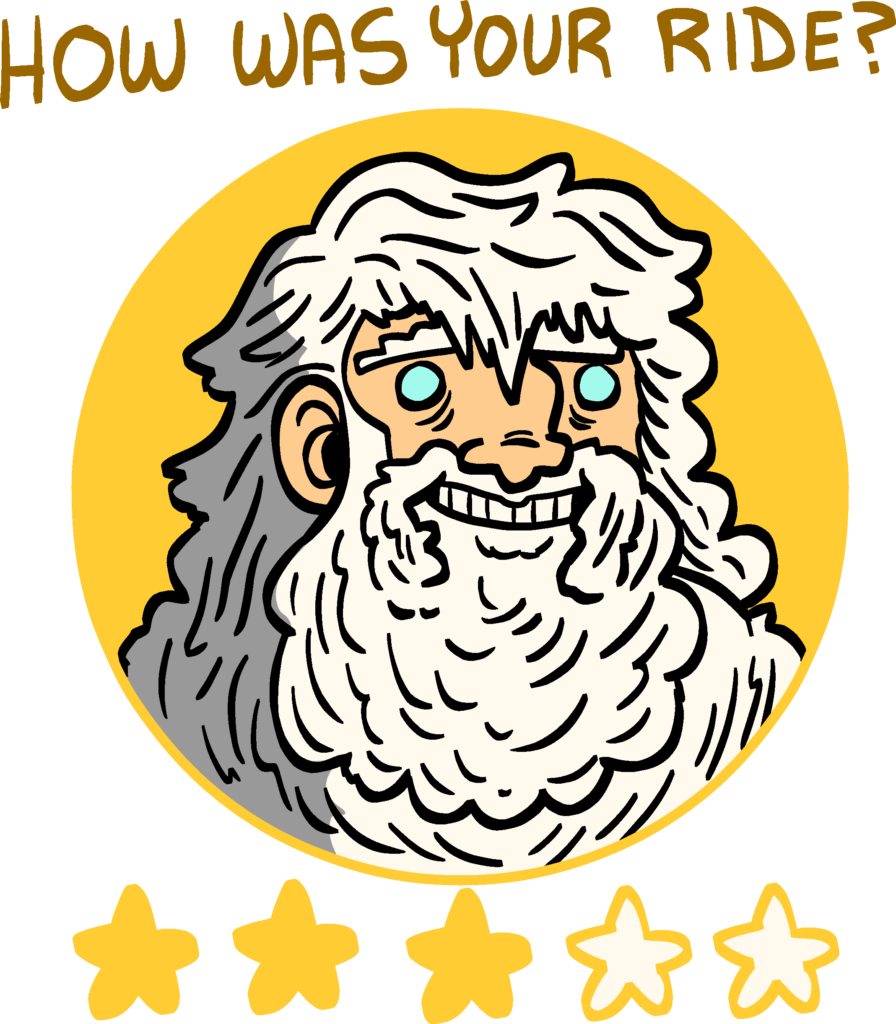 I happen to share a commute with the Banshee. I noticed her sitting across from me on the bus four years ago, reading Extremely Loud and Incredibly Close with a strip of duct tape over her mouth. We managed to have a quick chat over the heads of several other passengers. “YOU’D THINK I DRIVE PEOPLE AWAY, WITH ALL MY SCREAMING IN THE MIDDLE OF THE NIGHT, RIGHT?” she said. “WRONG. I HAVE FIVE ROOMMATES. THEY WEAR EARPLUGS.” At this point the bus driver pulled over and refused to keep driving until she kept her voice down. The Banshee rolled her eyes, shrugged, and pulled the duct tape back over her mouth. 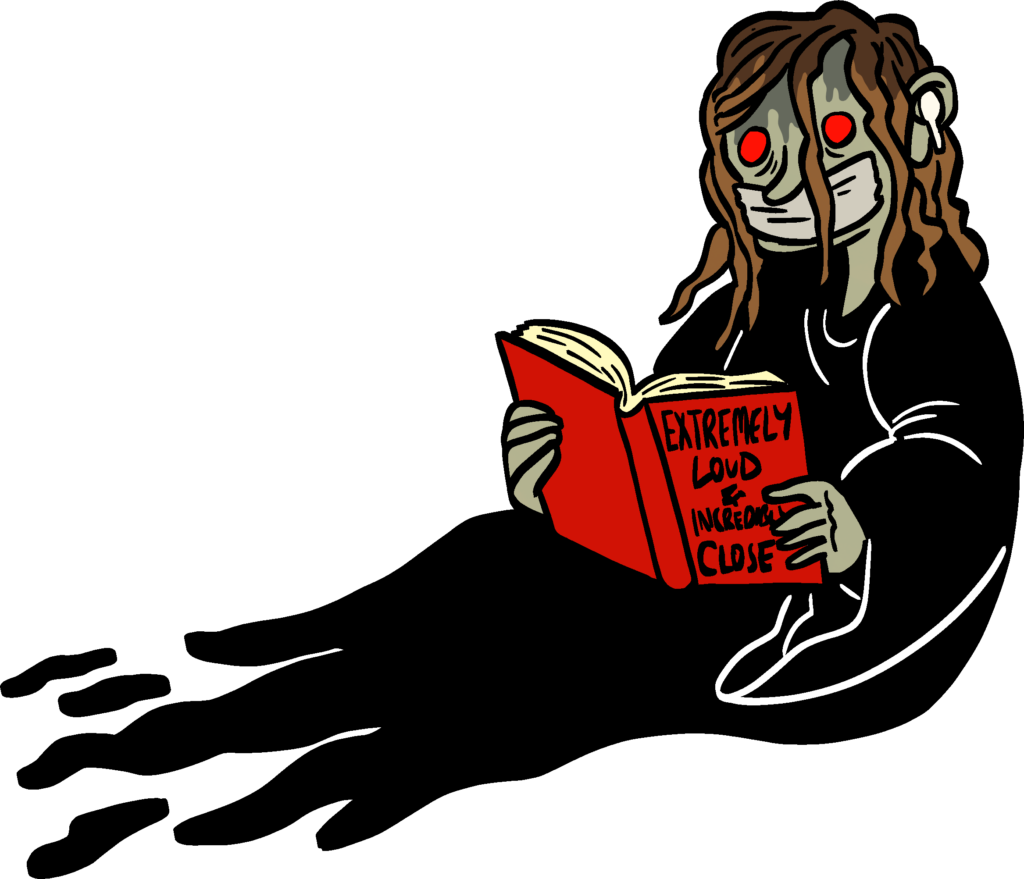 As you would imagine, I found Slenderman online. He has a fast-growing TikTok account where he can exist comfortably camouflaged among the hundreds of other users cosplaying as him. He sent me this series of messages at 4 in the morning.

“I’m in demand but nobody wants to hire me full time.”

“I’ve been running four different brand accounts and things are getting out of control.”

“now I’m having dreams about the Charmin toilet paper bears teaming up with the Keebler elves, ripping my internal organs out and flushing them down the toilet”

“can u send me some of your hair” 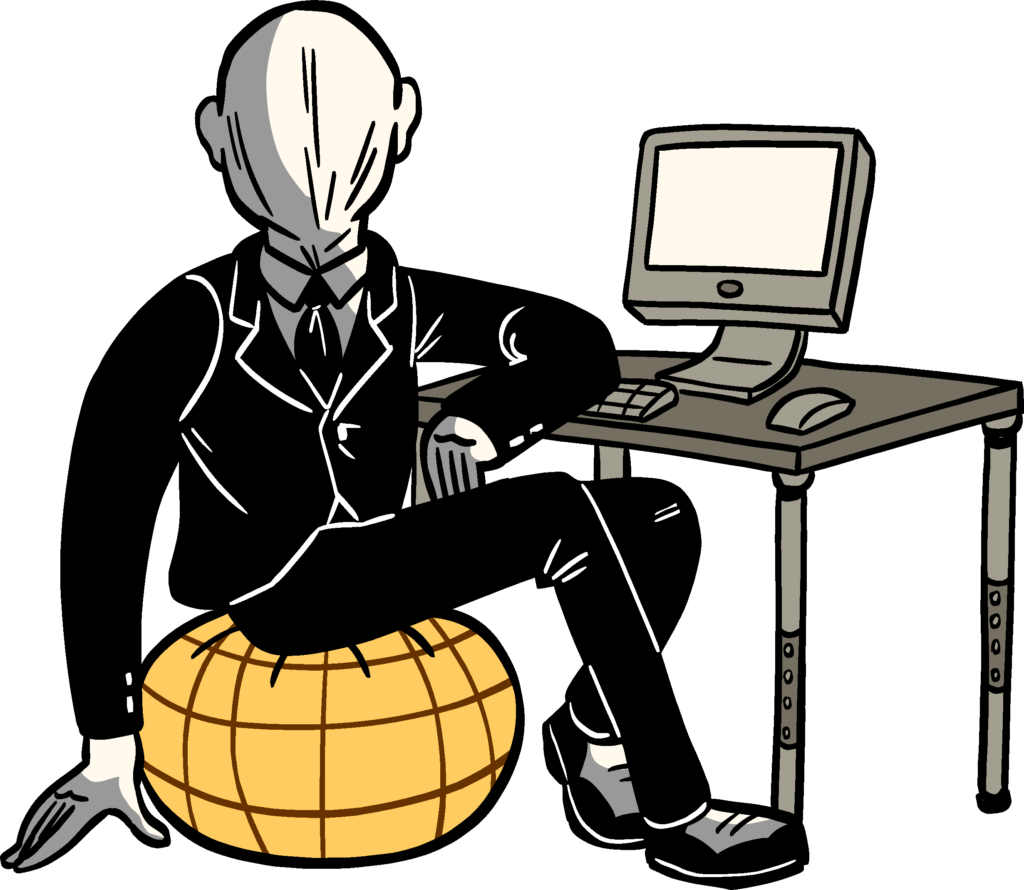 I spoke to Momo, the recently viral internet monster, via Skype. It didn’t take much convincing; they were eager to set the record straight about the controversy that they were embroiled in at the time. Momo’s giant, browless eyes seemed to consume the screen, and during our conversation a deep, strange feeling of lassitude came over me.
“Ok,” Momo began, “So YouTube demonetized my channel because I was ‘inciting kids to commit violence and self harm.’ First of all, I just want to apologize to my fans for this controversy. I think they know more than anyone that that’s not what my intentions were when I started this channel. They know I’m just a sculpture that the artist Keisuke Aisawa made for a special effects company in 2016. I don’t want children to kill themselves. I want to steal children. Is that so hard to understand?” 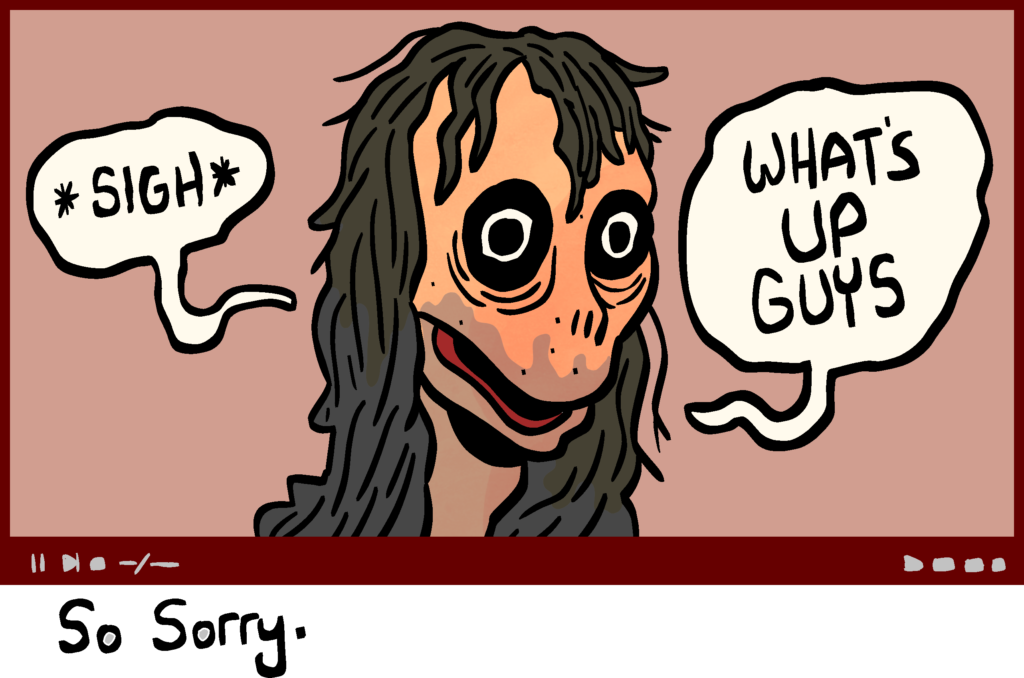 To meet with El Chupacabra I needed to return to my editor, hat in hand, and ask for an additional travel stipend. El Chupacabra refused to speak to me on the phone or via email, and he told me he’d only be in New Mexico for a few more days, and after that he didn’t plan on having a fixed address for a while. I caught him outside a motel in the middle of nowhere as he was tossing a worn out suitcase into his car. He took special precaution not to let me see what else he had in the trunk. He lit up a cigarette and leaned back against the hood, regarding me suspiciously. I’m sure he didn’t actually expect me to come. Like Bigfoot, he seemed to be a holdout from another time. I handed him the gasoline canister full of goat blood he had requested and he nodded approvingly.

“You know,” he said, “a lot of clinics will take blood donations and pay you for the plasma, $50 a squirt. Do I tell them that it’s goat? No. And by the time they figure it out I’m in El Paso with new plates on my 1995 Hyundai Elantra doing the same damn thing.”

He stopped, his long ears perking up. I could barely make out the sound of sirens. Without a word, he flicked his cigarette over his shoulder, tossed the gas canister in the back, winked at me, and sped away into a red Roswell sunset. 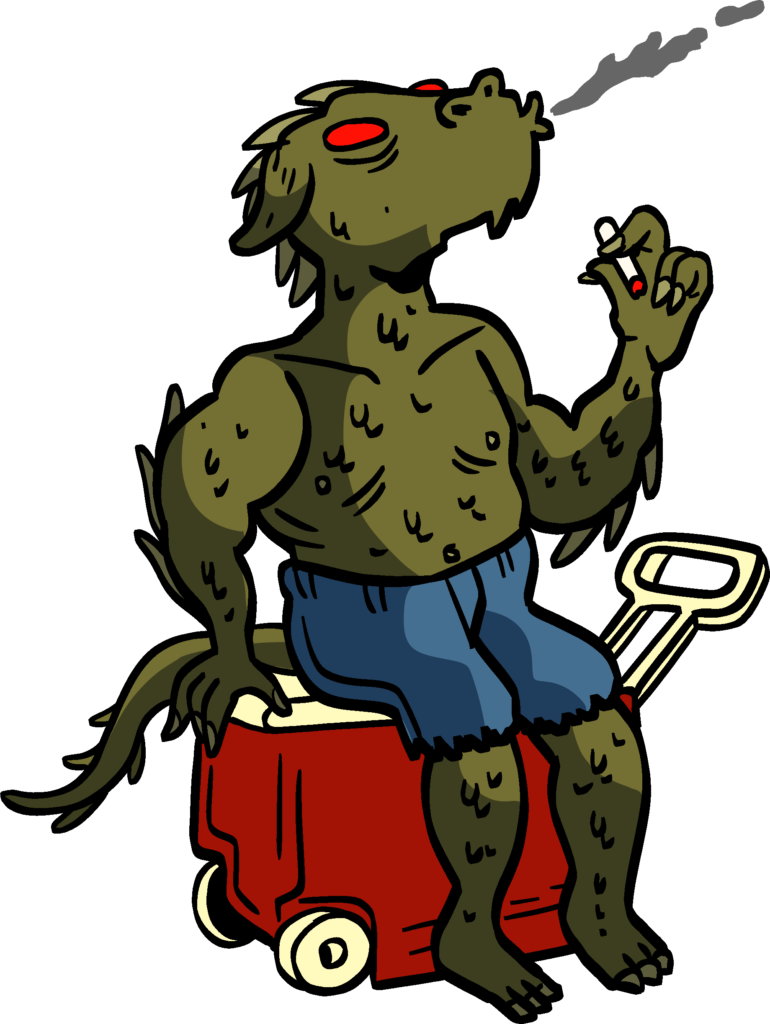