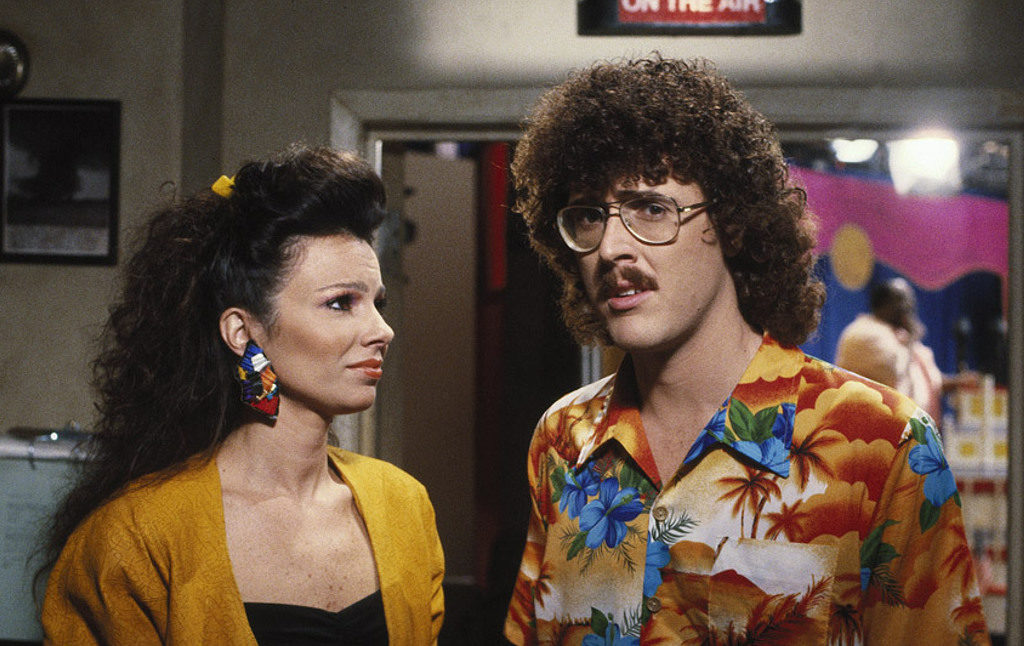 UHF, the feature-film debut of Weird Al Yankovic, was not considered a success upon its release in 1989. It flopped at the box office and its production company soon folded. Weird Al’s career as a leading man was cut short, and he was never again cast in a starring role. Nor was the movie well-reviewed. Roger Ebert was savage, calling it “the dreariest comedy in many a month, a depressing slog through recycled comic formulas,” and said “those who laugh at UHF should inspire our admiration; in these dreary times we must treasure the easily amused.”

But I do not care what Roger Ebert thought. I loved UHF, still love UHF, will always love UHF. I am not alone. The film has since picked up a cult following, to the point that the AV Club felt justified in running a complete oral history of its production. Emo Phillips, who had a small role in it, said that “whenever a young man turns 13, he sees this film, and it becomes his favorite film of all time.” Perhaps there are young men to whom this hasn’t happened, but it definitely happened to me.

Roger Ebert was not completely wrong—there is a lot of stupid humor in UHF. But as the AV Club writes, it’s not just “surreal, satirical, and slapstick,” it’s “also incredibly sweet, boasting a genuine affection for its underdogs.” In fact, I’d go further: UHF has good values, and its message is a solidly leftist one. I didn’t realize it when I was 13, but UHF helped instill me with a belief that a gang of eccentrics, working together, could defy all economic expectations, beat the capitalists, and build a successful community-run enterprise. As I have worked with my own gang of eccentrics to build a print magazine, UHF has been an enduring inspiration. It is one of the great parables of egalitarianism, a story of why collectivism will triumph over self-interest. Set aside the humor, which some people will love and some people will hate. The central lesson of UHF, whether Weird Al intended it or not, is that socialism is good.

Let me give you a synopsis. It spoils everything, but it won’t actually spoil anything, because nobody watches UHF for the plot. They watch it for the endless zany parody TV shows and infomercials littered throughout, from Wheel Of Fish to Conan The Librarian.

George Newman, played by Weird Al, is a somewhat useless and goofy “Walter Mitty” type daydreamer who gets fired from every job he ever works. He insists that this is because he has never been given a chance to fulfill his creative potential. (Big Edna of Big Edna’s Burger World would disagree.) George’s Uncle Harvey is a gambler, and wins a local access television station in a poker game. Under pressure from Aunt Esther, Uncle Harvey lets George run the station. It does not go well. Channel U-62 is being crushed by the Channel 8, the corporate network affiliate run by evil soulless capitalist R.J. Fletcher. It is airing Mr. Ed reruns and is staffed by oddballs. George makes some efforts to liven up the station’s lineup, but his low-budget live-action shows are tedious and drive the station further toward bankruptcy. Desperate and unable to salvage the station, George storms off the set of Uncle Nutzy’s Clubhouse and heads to the bar to drown his sorrows in daiquiris. He tells the U-62 janitor, Stanley Spadowski, to go on the air and finish the show.

You may have guessed where this is going: Spadowski turns out to be a natural on television, and Stanley Spadowski’s Clubhouse becomes a huge hit. U-62 begins to climb in the ratings, and a newly energized George finds his mad creative genius, with shows like Fun With Dirt and The Volcano Worshiper’s Hour becoming irresistible viewing. Seemingly everybody in town gets their own show, from the mysterious studio engineer who discloses “secrets of the universe” to a man who tries (unsuccessfully) to teach his poodles how to fly. Soon, U-62 is #1, the tiny Ultra High Frequency station having beaten out the networks by tapping into the organic talents of local people.

Channel 8 CEO R.J. Fletcher is livid. He vows to destroy U-62 by any means necessary. Soon he has his chance: Uncle Harvey is in debt to his bookie, Big Louie, for $75,000 and must pay up within two days. Fletcher offers to pay off Harvey’s gambling debt, in exchange for the deed to U-62. Of course, thanks to the 1975 FCC rule prohibiting broadcast media cross-ownership, Fletcher cannot own two channels in the same local market. He therefore vows to flatten U-62 and turn it into a parking lot.

George hatches a plan: The local community can buy U-62  from Uncle Harvey, and the whole town can own the station. U-62 hosts a telethon in which they sell individual shares in the station to the public. They are quite clear that they’re not relying on charity, but trying to transfer ownership from Harvey to the community: “We’re not asking for donations. If we succeed, then the station will belong to all of us.” Unfortunately, Stanley, star of the telethon, is kidnapped by Channel 8 henchmen, derailing the whole project. At the climax of the film, a daring rescue is staged, Stanley is returned, and the telethon is about $2,000 short of its goal as the clock ticks. It looks like they won’t make it, and Fletcher is set to take control of the station. But then: a homeless man, to whom Fletcher had contemptuously tossed a penny earlier in the film, arrives with $2,000. The penny had been a 1955 double die cent. The station is saved, and Fletcher is given a righteous kick in the testicles by an elderly lady, while his simpering snake of a son is pushed into a mud puddle by Billy Barty.

The political lessons here should be obvious. There are several layers to UHF’s egalitarian social theory:

There are days when I doubt that socialism will win. There are days when I think that running a print magazine on a shoestring budget with a group of oddballs is a doomed endeavor, that we will inevitably be crushed by the forces of rapacious capitalism. But then I think about UHF and I become more certain than ever that it can be done. Channel 8 will be driven off the air, and U-62 will emerge triumphant.