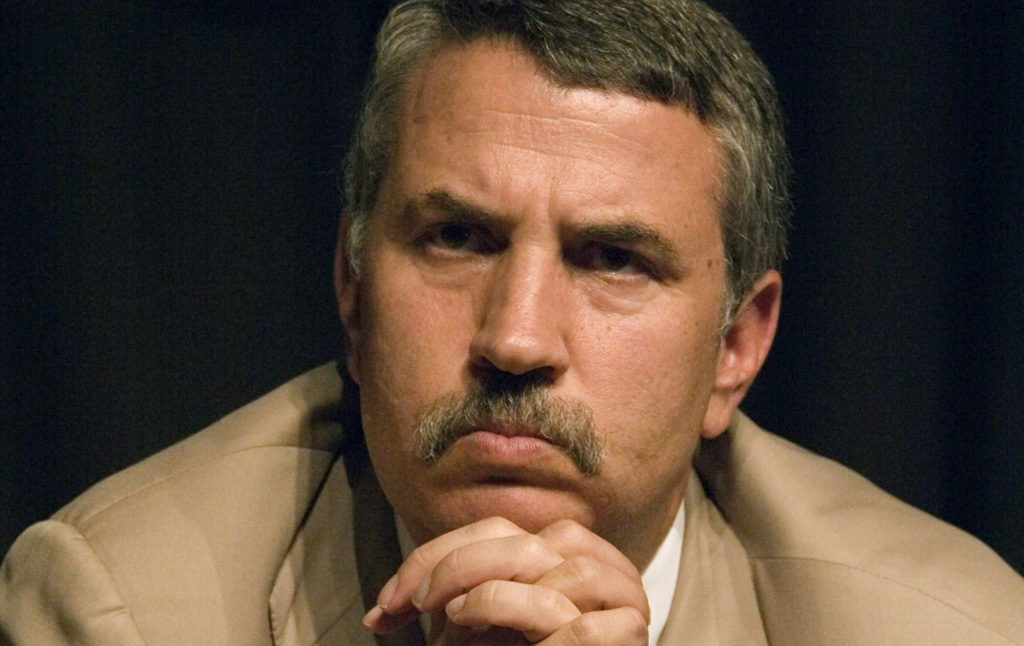 At this point, pointing out that everything Thomas L. Friedman writes is insipid may seem like belaboring the obvious. But one cannot allow misconduct to be normalized through repetition. Even obvious things must be said, if they are true. As the saying goes, fish are not entitled to clemency merely because they happen to inhabit a barrel.

One might have thought it impossible for Friedman to top such career-making classics as his flexible Iraq foresight, his “suck on this” foreign policy philosophy, or his mathematically precise curiosity quotient equation. Today, however, in a column called “Trump Is Wasting Our Immigration Crisis”—explaining why Donald Trump’s Wall is necessary but not sufficient—he offers a game-changing new way of thinking about borders. Not just Trump’s big wall, not James Clyburn’s “smart wall.” No, Friedman says, “we have a real immigration crisis [and] the solution is a high wall with a big gate — but a smart gate.”

Now, Current Affairs could point out once again that New York Times reporters need to stop swallowing and regurgitating the Trump administration’s narrative of a “border crisis” demanding urgent action. We could point out that a writer infamous for his colossal fuck-ups on the Iraq story should probably be cautious before using citations like “one Border Patrol agent explained to me” in documenting the facts of the immigration system. And we could lament that writers from America’s “liberal” newspaper are coming to the conclusion that “we need new walls” and “ we need to rethink who is entitled to asylum, so people fleeing economic dislocation don’t overwhelm our borders and harden our hearts to people truly fleeing tyranny.” (No we fucking do not. How about just choosing not to harden our hearts at all?)

But while we could analyze how Thomas L. Friedman is both credulous and callous, while we could imply that the Pulitzer Committee should have thought twice before giving him journalism’s highest prize on three separate occasions, while we could gently suggest that Friedman’s Pulitzers are the equivalent of Kissinger’s Nobel, we are compelled to refrain from the exercise. For just as a scathing piece was being drafted by our editor, we received an unsolicited pitch from a most unexpected contributor: Thomas L. Friedman himself. Friedman, perhaps intending to dispel any bad vibes between himself and this magazine, informed us that we would be offered the exclusive right to publish half a dozen of his upcoming columns, on topics ranging from foreign policy to economics. Naturally, as it is not every day that a small-circulation print bimonthly has the chance to publish a three-time Pulitzer winner, we leapt at the chance. We are delighted to showcase the topics along with excerpts from the forthcoming columns.

Everyone loves democracy, and for good reason. But when George W. Bush talked about “bringing democracy” to the people of Iraq, it was “dumb democracy.” Iraq already had this kind of government—a dictatorship is just a dumb democracy. What it needed was a forcible injection of 21st century-ism. It needed to be held down, face bound with a cloth, and have modernity poured into its nostrils. You can’t hope to have uneven governance in a flat world.

The most important question facing us now is: “How should America conduct military interventions in other countries?” The answer is so obvious that I’m surprised I’m the first one to think of it. We should do it smartly. You don’t move forward when you’re moving backward.

Questions of propriety in foreign policy should follow a simple formula: S x P = W. Multiply a policy (P) by its smartness (S) to determine whether (W) to do it. Is torture okay? Depends if you’re doing it smartly. How to handle Venezuela? A coup, yes, but intelligently executed. If the last 100 years have taught us anything, it’s that foreign policy is better when it’s better and worse when it’s worse.

People talk a lot about “mass incarceration.” Another phrase that exists is “mass media.” But they never make the connection between the two. As a polite government official told me, the problem isn’t that we incarcerate millions of people, it’s that we incarcerate them in rooms. Rooms are just walls. What you need isn’t fewer rooms, but rooms equipped with the best available rehabilitation technology.

The “carceral app”—this is an expression you don’t hear. But you should, and you will. We’re already seeing it: Instead of visiting relatives in prison, people now have to Skype with them instead for a fee. It’s a green solution: no wasteful travel, and the fees go to carbon offset credits. But we could take it further: Instead of sending inmates letters and packages, why not choose a custom emoji, which will be projected onto the wall of their cell in the middle of the night?

The jail is a 19th century technology—it’s called a penitentiary because of “penance.” But it doesn’t have to be. Can jails be smart? Only if we are.

Young people complain a lot about their debt. And they’re right: There’s a lot of debt that isn’t very smart. Tying down innovators and risk-takers with needless obligations? Not so smart! Disincentivizing bad decisions and punishing people for taking economically useless arts degrees? Quite a bit smarter.

That’s the difference: Some debt makes sense, other debt doesn’t. Our problem is that we haven’t asked the right question. I talked to a student once who told me that if they had the money they were using to pay their student loans, they could fund a startup that would deliver insulin via drone. Wow: If we were smarter on debt, we could solve the healthcare crisis. A missed opportunity. Dumb debt, indeed.

Lots of people should be in debt. Debt works, debt is the grease that fuels the motor of consumption. You don’t want an engine without oil in it—ask a mechanic. But dump too much oil in, and there’s more oil than engine. That’s not good either. How much oil is too much? That’s the question, but first we have to ask it.

We hear a lot about “smart policing” and “smart jails.” But with the rising tides of populism, it can be harder than ever to keep things smart. What happens if there’s a backlash from the not-so-smart?

I spoke to the head of Oppuquell Crowd Control Solutions about the new technologies that are helping to keep uprisings at bay. “The key, Tom,” he told me, “is to know exactly where every single human being is at all times; to have their name, DNA, and a full transcript of every word they have ever spoken in private.” Fortunately, we’re closer than ever to making this a reality, thanks to public-private partnerships. Take one Department of Homeland Security, add the Alphabet Corporation, and voilà: intelligent governance.

It’s all about Big Data, delivered in real time. Beam photos of the protesters’ families into riot control officers’ smart helmets. “Wouldn’t want anything to happen to little Angelo,” the officer can say to the dissident. “He’s so cute in his little pink shoes.” Smart threats. The more you know, the better you govern, and technology is helping us govern better than ever.

Climate change is coming, like it or not. The world is changing. It’s still flat, but the water is rising. And in a flat world, a rising tide means there’s less high ground. Not good news unless you’re in the boat business. (Which, in a way, I am.)

Lots of people have ideas for how we can deal with climate change. “An international plan to drastically restrict carbon emissions and switch completely to alternative energy sources” seems to be the emerging consensus. But let me respectfully propose an alternative: The problem with warming isn’t that it’s warmer. It’s that we’re handling it too hotly. We don’t have to do that, though. Today’s technology means we can be warmer than ever while still staying cool.

In South Bend, Indiana, they installed “smart sewers” to deal with water crises. That’s a good idea, but we can go further. “Smart infrastructure” would be a job creator. Smart roads, smart bridges, smart pipelines, smart landfills, smart weapons, smart walls, smart traffic circles. Imagine it: an intelligence revolution, but green. You’d bring the jobs back, and the climate could still change. The best of both worlds. What do you say, Mr. Trump?

Steve Bannon is right. You might not expect me to say that, but it’s true. Why? Because Bannon understands that there is no contradiction between embracing 21st-century tech and understanding the clash of civilizations. Breitbart was 19th-century political analysis on a 21st-century platform. Wired nationalism. Seemingly disparate tendencies resolved into a unified, amazingly contemporary force.

Was the problem with nationalism that it was national, or was the problem that it wasn’t on your phone? If you believe Karl Marx, it was the former. But have we really considered the latter? We can’t escape globalization, it’s true. Yet we also can’t escape its tensions. Maybe the best solution is to couple technology and provincialism, the universal and the specific, the rational and the romantic. Free trade, yes, free people no. Do we need to give up our Amazon Prime accounts in order to secure the future existence of our people? I say we don’t. With smart phones plus smart nationalism plus smart walls minus—of course—dumb dissent, we can have everything we want, for a nominal fee.