How AOC Is Changing The Game 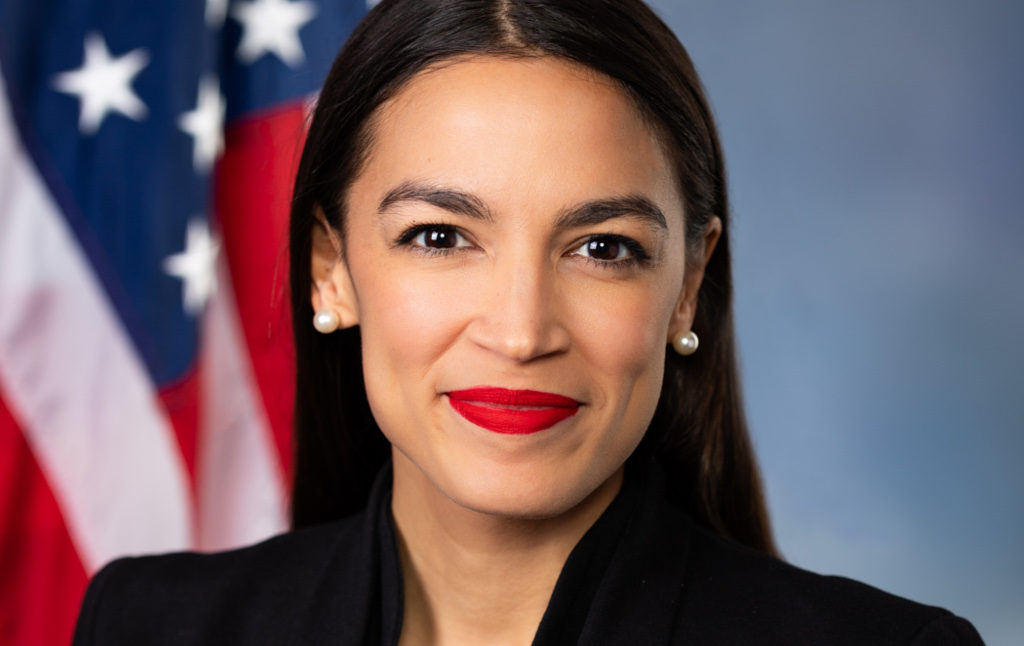 Alexandria Ocasio-Cortez is showing how the left can seize control of the political conversation. Can she keep it up?

The answer to the question “Who’s afraid of Alexandria Ocasio-Cortez?” is: establishment Democrats in Congress, apparently. A recent Politico report says that fellow House members are worried she’ll “unleash a tweet at them,” and are “afraid” of her stinging public criticisms of Democrats.

Their fear is not irrational. Ocasio-Cortez has been using Twitter masterfully, as a way of directing the national political conversation. The Politico article compares her technique to that of Donald Trump, and this isn’t completely wrong: Trump has long used his Twitter account to keep the media talking about whatever he wants them to be talking about. Democrats have long failed to keep pace—they end up reacting to whatever Trump says, rather than setting the agenda themselves. In Ocasio-Cortez, we see (at last!) what it might look like for lefties to retake control—to begin talking about what we want to talk about rather than whatever nonsense Trump is spewing this week.

To see what a “game-changer” Ocasio-Cortez is, you need only look at this front page: 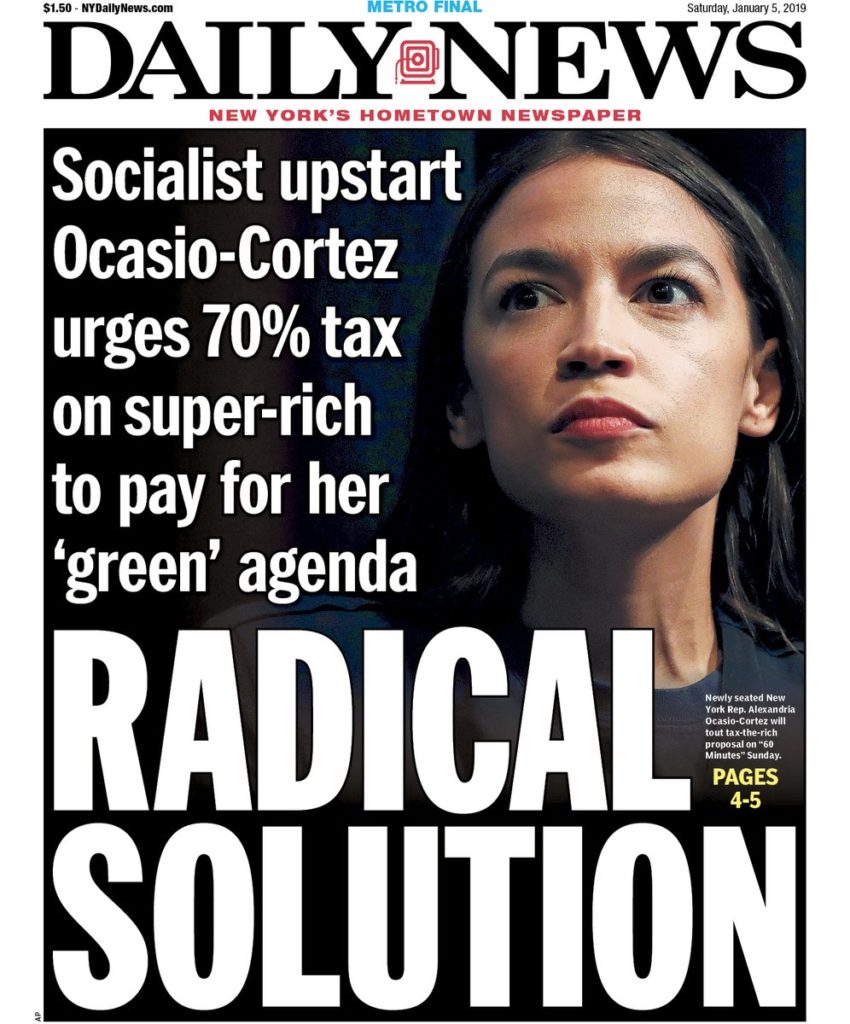 It’s incredible: Ocasio Cortez’s remark about 70 percent marginal tax rates on the rich was delivered offhand in an interview. It immediately sparked a national political debate about taxes. Paul Krugman weighed in to say that taxing extremely high incomes made sound economic sense. Jeff Stein of the Washington Post laid out some of the ways that this money could be used:

It could come close to funding the entirety of Sanders’s free college tuition plan ($800 billion), fund President Barack Obama’s plan to get close to universal prekindergarten ($75 billion over a decade), forgive more than half the student debt in America ($1.4 trillion), cover Democratic leaders’ plan for boosting teacher pay and school funding ($100 billion), or come close to funding a $1 trillion infrastructure plan.

If AOC hadn’t made the remark, there’d be no discussion. But she did, and so now there’s a discussion! Now Nobel Prize winners are publicly pointing out that high taxes are good, and moderate Democrats are being pressured to endorse “radical” ideas. As the New York Times reported, she is pushing the Democrats to the left whether they like it or not. She has realized what Republicans have known for a long time: If people are talking about your agenda, even if they’re talking about how bad and silly it is, you are making that agenda more plausible. (It’s often called “shifting the Overton Window.”) Yes, the National Review will squeal that X tax hike won’t be enough to pay for Y program. But you’ve got them on the defensive.

I’ll admit, when Ocasio-Cortez was elected, I was worried. In 2008, a lot of people my age fell in love with Barack Obama, and suffered bitter disappointment when he started listening to Larry Summers instead of Cornel West. Many of us became cynical: We learned not to put much faith in dynamic young leaders, because as soon as they get into power, they will inevitably become just like all the others: They’ll start issuing excuses for why political constraints make it simply impossible to change anything, and while you won’t be able to prove they’re wrong, you’ll come to suspect that they aren’t really trying very hard.

But so far, thank God, Ocasio-Cortez has been an inspiring exception to this. She made it clear that her loyalties weren’t with the Democratic leadership but with the protesters occupying the offices of the Democratic leadership. She told us what really goes on in Congress: When Harvard’s Institute of Politics held a seminar for incoming congresspeople, in which business leaders told them not to rock the boat, Ocasio-Cortez revealed all. You’re not supposed to do that—you’re supposed to handle your concerns quietly within the House, not open up to your constituents about them. They say that she “doesn’t understand how the place works.” But it seems more like they’re the ones who don’t understand how building power works.

The Politico report offers a useful insight into how insider Democratic politics work—the article is full of long-serving Democrats grousing that the upstart AOC has dared to suggest that some of them aren’t doing a very good job. Apparently they keep trying to take her aside and give her that age-old speech: It’s very well for you to be a radical on the campaign trail, but now you’re in Congress you need to stop making waves and let us show you how things are done. As one said “I think she needs to give herself an opportunity to know her colleagues and to give herself a sense of the chemistry of the body before passing judgment on anyone or anything.”

You can see, then, why the Democratic Party ends up being so disappointing. You shouldn’t pass judgment on anyone or anything when you get to Congress. Even though the Congressional Democratic party has utterly failed to grapple with climate change, the great existential problem of our time! Politico reports that “when House Majority Leader Steny Hoyer (D-Md.) told reporters that a new climate committee that Ocasio-Cortez championed would not have subpoena power, she retweeted the news and chastised Democratic leadership.” She said: “Our goal is to treat Climate Change like the serious, existential threat it is by drafting an ambitious solution on the scale necessary — aka a Green New Deal — to get it done. A weak committee misses the point & endangers people.” This is absolutely true. She is right. Climate action has to be serious, and if Democrats in Congress won’t be serious, they need to be called on it!

Arguments in defense of the status quo are usually presented pragmatically: Don’t push too hard because it will hurt your goals. We’re on your side, we’re looking out for your interests, we just have a better way of getting things done. You can see exactly this in how House Democrats are trying to keep Ocasio-Cortez from endorsing their primary opponents:

In private conversations with Ocasio-Cortez over the past few months, Velázquez counseled Ocasio-Cortez against targeting her Democratic colleagues in future elections. The two had a “long, long conversation” about the dynamics of Congress and Washington, and how there shouldn’t be a “litmus test” for every district. Velázquez told Ocasio-Cortez she should think twice in the future before backing primaries against her colleagues. Murphy, the first Vietnamese woman elected to Congress, represents a swing district and could lose her seat if she’s forced to move left in a primary, Velázquez said during the talk.

This is concerning, of course. In order to get Democrats in Congress to move left, there have to be primary threats. This, historically, is one way socialists have won victories in the United States: They have forced the major political parties to move leftward in order to neutralize the socialist threat. It’s not surprising that AOC is being asked not to “undermine” fellow Democrats, but it’s encouraging that so far she seems to be going her own way. Politico says that while she is cordial to her fellow party members, she does not give in:

She’s very friendly in person, chatting up fellow lawmakers and security workers in the Capitol as she’s tailed by admirers and reporters. Then they see the Ocasio-Cortez on Twitter, where she frequently snaps at critics and occasionally at fellow Democrats.

What the reporter calls “snapping,” I call “being frank and honest about what is actually going on in Washington.” And I dearly hope she keeps doing it, and isn’t intimidated by colleagues who think she needs to be more meek and deferential.

There is a lot of dismissal of Ocasio-Cortez for her bluntness on Twitter, but I have to say, among the young lefties I know, many adore AOC for being witty, smart, and combative on social media. She does not take crap, and we have spent so long waiting for someone who “gives as good as she gets.” The tweets may be snarky, but they get to the point, and they finally make us feel as if we’re on the side doing the “dunking” rather than the side being “dunked on.” When Chris Cillizza of CNN lied about manipulating a quote from her, she demanded accountability. When PolitiFact disproportionately focuses on her over the president’s propagandists, she calls them on it. Her remarks are keeping her in the news, but more importantly, they’re keeping her agenda in the news.

Conservatives cannot stop talking about AOC Sean Hannity literally repeats her agenda on live television and then thinks he’s the one winning! She drives them up the wall, and it’s fantastic. But there’s one person who never mentions her: Donald Trump. Strange, isn’t it? Trump mocks everyone on Twitter. But he has never once sent a tweet about her, even though they both have major presences on the platform. I suspect I know exactly why: He realizes that she’s better at this than him. He may be able to make jokes at the expense of Elizabeth Warren, but AOC is better at online repartee than almost anyone else. He is wise to keep away from tangling with her. Just recently, when Joe Lieberman made a patronizing comment about AOC not representing the future of the party, she gave a brief but devastating retort that made him look like an out-of-touch fogey. (I doubt he even understood it.)

There are other reasons people my age have truly been enjoying watching AOC in action. For one thing, she’s capable of talking about immigration without making arguments about how Democrats are the real party of border security. She bluntly sticks up for progressive values, rather than timidly using conservative premises. She’s not always perfectly polished, but I feel as if she’s on my side and won’t back down, which is something millennial leftists really need right now. My desperate, pleading hope is that instead of succumbing to the inevitable pressure from Congressional peers—moderate your rhetoric, “get serious,” don’t criticize the Party—she doubles down and keeps kicking ass. She’s already showing how we can successfully change the conversation: The Green New Deal, like Medicare for All, has gone from marginal to mainstream within a matter of months. Politico makes it clear: Fellow Democrats are scared, and that’s exactly how it should be. Now we need AOCs everywhere, young DSA lefties in office who will not be intimidated by the advice of the Wise Elders to slow down, calm down, shut up. We’ll remember what Martin Luther King said: When the pragmatic liberals say “Wait,” they almost always mean “Never.”