How Brazil’s Neo-Fascism Threatens The Planet 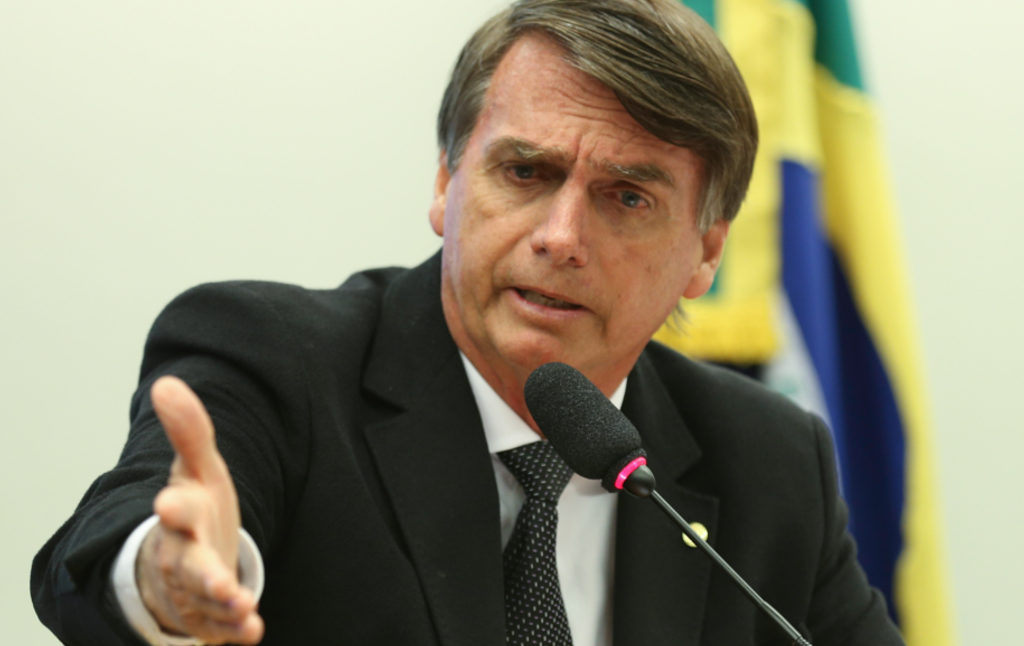 Jair Bolsonaro, the neo-fascist president-elect of Brazil and one the most extreme politicians in liberal democracies today, threatens a return to a time when the Brazilian Amazon was seen as wasteland to be exploited and settled. As I’ve written for Current Affairs, Bolsonaro’s specific style of fascism is based on nostalgia for the military dictatorship that ruled Brazil for 21 years between the 1960s and the 1980s. In fact, much of his agenda is a revival of the National Security Doctrine—the Cold War ideology of exterminating internal communist threats popular in Latin America. As the former Army captain made clear in a rally a week before his electoral victory, under his leadership, the “reds” will be put in jail or forced into exile. But this is not all. Another essential feature of the Brazilian military regime that Bolsonaro mimics is the desire to “conquer” the Amazon region.

Brazilian politicians have plotted to settle and industrialize the country’s portion of the Amazon basin, a sparsely populated area the size of half the contiguous United States, since the 1940s. But it would take another 30 years and the height of the military regime for the Brazilian government to successfully launch a series of substantial development programs promoting mining, industrialization, and large-scale food production across the Amazon. The 1970s saw a flood of fiscal incentives and abundant cheap credit to lure national and international capital to Amazonia, creating the conditions for the exploitation of bauxite, aluminum, iron ore, and tree plantations for pulp and paper. Large hydroelectric dams like Tucuruí were erected to power the expansion of mining operations.

Fertile zones incubated settlements and plantation agriculture. Meanwhile, areas unsuitable for crop production harbored large-scale cattle ranching, with planners forecasting the introduction of 5 million head of cattle in the region until 1980. Ranching, in particular, is a classic way of occupying territory with few people. At the heart of the development program was the generals’ deep fear of losing the territory to neighboring countries or powerful nations such as the United States, which fed their obsession with colonizing the rainforest with Brazilian settlers brought in from other areas of the country.

For the military, these programs were a success, as they attracted throngs of internal migrants to the region. Between 1960 and 2010, the Brazilian Amazon’s population grew from 2.5 million in to 15.8 million. For anyone worried about the future of the planet, on the other hand, these policies were a disaster, as they unleashed a process of destruction of the forest that continues to today. Until the 1960s, 98 percent of the Brazilian Amazonia was still standing. By 2017, only 80 percent was left. In other words, Brazilians have already cleared off twice the size of California.

“Well, but there are still a lot of trees left,” one could say. Why is this so important, then? Because of climate change.

Brazil is the world’s sixth largest greenhouse gases emitter and, traditionally, the primary source of greenhouse gases in the country is carbon dioxide produced by deforestation. In 1995, 77 percent of Brazil’s carbon dioxide emissions were a direct result of clearing forests mostly in the Amazon. The good news is that by 2013, carbon dioxide emissions from deforestation had been reduced to one-fourth of what they were in the 1990s. Brazil’s largest reduction in greenhouse gases emissions came from the efforts to curb deforestation while the left-leaning Workers’ Party (PT) held power between 2003 and 2016. Indeed, the Amazon’s annual deforestation rate dropped from 16,777 square miles in 2004 (or roughly the size of New Jersey) to about 4,350 square miles in 2016, the year that President and PT member Dilma Rousseff was impeached.

This is not to suggest that the PT had a perfect record on environmental issues in the 13 years that the party was in power. On the contrary, its politicians implemented misguided policies that greatly expanded the use of automobiles and clogged Brazilian cities. They pushed for the construction of large hydroelectric dams in the Amazon that came at enormous environmental and social costs. They allowed the relaxation of environmental laws, which in turn advanced the expansion of agribusiness in Brazil’s central savannah. They also promoted excessive investment in offshore drilling through the Brazilian state-controlled oil giant Petrobras, which intensified the share of carbon-producing activities in the national economy and bred conditions for vast corruption schemes. Yet, despite all this, the Workers’ Party governments managed to drop the deforestation rate in Brazil by almost 75 percent overall.

By the time Bolsonaro leaves power, if he ever does, the outlook for the Amazon may be much direr. Indeed, Bolsonaro has surrounded himself with a cadre of retired top brass who cut their teeth in the Army during the dictatorship working on large infrastructure projects in the Amazon. Take Oswaldo Ferreira, for example, the retired general poised to be appointed Minister of Transports. Ferreira has proudly declared that when he worked as an Army lieutenant in the construction of a highway traversing the rainforest in the 1970s, “they felled as many trees as they needed,” as there was no environmental agencies or NGOs to “bother” them. “Someone tries to cut a tree today, and a lot of people start complaining,” he continued. As a Minister, one of Ferreira’s priorities will inevitably include finishing the infrastructure works in the Amazon that stalled since Brazil fell into a deep economic and political crisis four years ago.

Ferreira sings the tune of Bolsonaro, who expressed his discontentment with the enforcement of environmental laws, which he believes impedes Brazil from exploiting the riches of the Amazon. Bolsonaro wants to un-designate national parks and biological preserves, open indigenous lands for mining companies, expel environmental NGOs from Brazil, and defund Brazil’s environmental agencies. There is the risk that under his rule, the powerful Ministry of the Environment (the equivalent to the U.S. Environmental Protection Agency) will be defanged and absorbed into the Ministry of Agriculture, which will almost certainly be controlled by the reactionary agribusiness caucus.

Of course, hostility towards efforts to protect the environment precedes Bolsonaro. Before he assumed office, suspected arsonists burned to the ground the local headquarters of IBAMA and ICMBio—the two main federal environmental agencies—in the Amazonian town of Humaitá. Last year alone, 57 environmental activists were murdered in Brazil, making the country the deadliest for those resisting ecological destruction. The majority of these cases remain unsolved, largely because they mostly involved low-profile activists and because the local police can be lenient and corrupt. Bolsonaro will only add fuel to the fire. Even if he somehow fails to pass most of these reforms through Congress, the anti-environmental rhetoric that he will continue spreading will only make things worse by encouraging environmental violations and worse.

After all, Bolsonaro’s message is clear: You can cut and burn the forest; harass local communities and kill activists who stand against you; and local cops will do nothing to stop you, as you have the backing of the man in the highest office in the land. These anti-environmentalist plans are entirely consistent with his goals to clean up the reds. Instead of fighting the urban guerrillas or the rural communist militias active during the dictatorship, Bolsonaro aims to persecute a diverse group of moderate liberal political actors that include human rights activists, LGBTQ and Afro-Brazilian militants, indigenous peoples, left-wing school teachers and college professors, journalists, and members of the center-left Workers’ Party. In the Brazilian version of U.S.-style cultural wars, Bolsonaro will use the power of his office to “put an end to all types of activisms,” as he declared in the campaign. There’s no reason to think that Brazilians who intend to fight to protect the Amazon will be spared from the government crackdown and from the anti-environmentalists emboldened by his message, all the while police officers become even more reticent to protect environmental activists.

The United States government supported the coup that brought the military to power in Brazil in 1964 and, turning the blind eye to the growing evidence of human right violations, remained closely aligned to the dictatorship until the mid-1970s. If Bolsonaro carries out the crushing of dissent voices and the indiscriminate opening of the Amazon to commodities exploitation he promised in campaign, we can expect the current U.S. administration will give an even more enthusiastic support. White House national security adviser John Bolton, unsurprisingly, already called Bolsonaro a “like-minded partner” in Latin America. Such “partnership” will come not only at the costs of the lives of people on the ground fighting destructive environmental policies, but also of humanity’s chances to reverse climate change.