Quiz: Is Your Feminism Angry Enough? 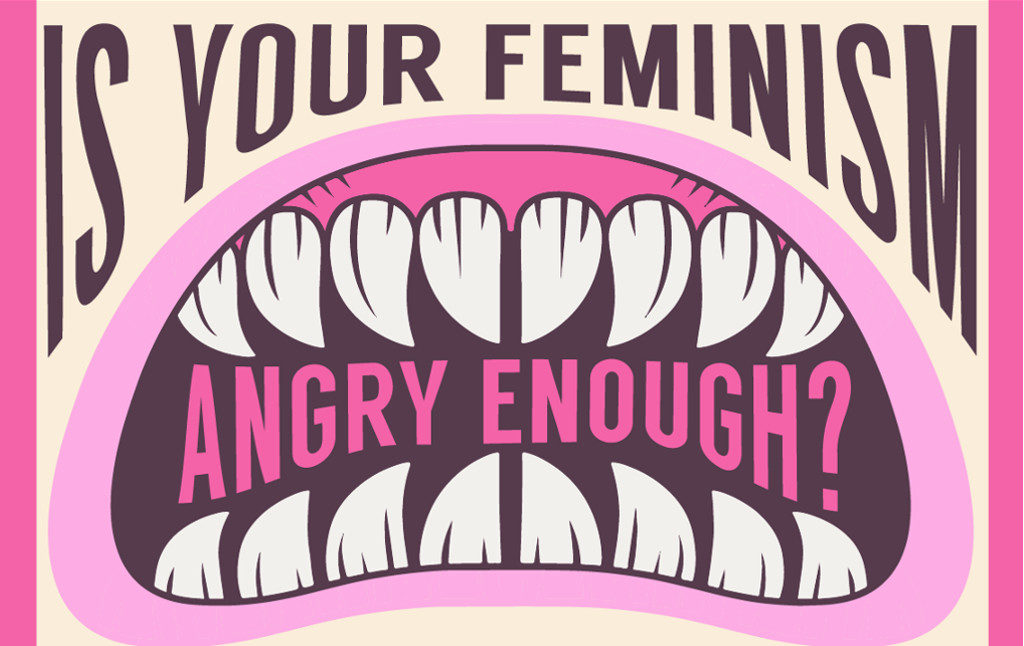 Yes, you’ve always been an angry feminist. But 2017 awoke a dragon in you, and you can no longer greet everyday examples of the systemic misogynist inequalities of our society with any kind of useful, focused wrath. All you want to do is burn down every goddamn thing in sight. Here at Current Affairs, we understand your anger, and in fact, we celebrate it. But in the time-honored tradition of women’s magazines, we must ask: is it enough? Are you furious enough? When it comes to utterly crushing the patriarchy under the heels of all womankind (flat, stiletto, kitten, wedge, or platform), are you fully committed to the task? Are you ready to thrash the patriarchy until it’s silent and bloody and lifeless and then just keep beating the fucking shit out of it because you can’t fucking take it anymore?

1. You’re walking home alone from a bar after a lovely night out with your friends. In the drizzling rain and your drunkenness, you only slowly notice something that should have been obvious for blocks: there’s a car, quietly following you down the street. The driver wears a hat tipped low over his face, as if trying to make sure you won’t be able to identify him later.

You’re a woman, so let’s be real: this isn’t the first time something like this has happened to you. But tonight, instead of panicking and blaming yourself for your carelessness, you’re prepared. You:

A. Press the button on the top of your umbrella to release the hidden crowbar. Race toward the car, brandishing the crowbar and screaming at the top of your voice. Smash his headlights. Smash his windshield. Smash everything in sight including his ugly fucking face if he dares to open his fucking door. If anyone tries to help him, clobber them too. If you’re arrested, burn down the police station.

B. Turn into vapor. As your stalker stops the car and gets out, prodding at your suddenly empty clothes, enter his nervous system through his ears or, if you prefer, his nasal passages. Once you’re well-situated in his neocortex, twist his neurons until he believes he’s being chased by a horde of his previous victims. Run the stalker through street after street until he splashes down into the nearest body of water. Make sure he’s thoroughly drowned before you disentangle yourself from the limp bundle of pasta that used to be his brain. Oh, and before you turn back into your body, don’t forget to float back to your clothes. That was a killer outfit and you looked amazing.

C. Duck into the nearest subway station or 7-11. As his car slides past, frustrated in his pursuit, take careful notice of the license plate. Later, using not-so-legal methods, find out your would-be stalker’s address. Plot your next steps carefully: you want to make sure you’re not interrupted. And use your skinning knife. I mean, you didn’t spend half a paycheck on a designer skinning knife not to use it, am I right? Tan the stalker’s hide and use it to re-bind your favorite novels. Carefully dissolve the rest of the corpse in acid. Excellent work. They’ll never know it was you.

D. Yes, you could kill him. Maybe you even should. But that doesn’t solve the problem, does it? After all, he’s hardly the only predator out there, and you’re hardly the only woman who’s ever been stalked by a stranger—or an acquaintance, a coworker, an ex-boyfriend… you’ve had enough. You decide to build an army of women warbots. These warbots are ten feet tall and weigh three tons apiece; despite their size, they’re murderously fast. In blocky, sensible armor, not even the horniest moron could find them sexy—and if they do, who cares, because your warbots have just reduced them to bloody sludge. You seize the entire city in which the man stalked you, and refuse to surrender it until your demands for society in which all women are safe and equal are finally met.

2. Your boss calls all the female employees into his office. He says that a former female staffer made an allegation of systemic sexism and lack of opportunities for women at the company, and he’s feeling terribly upset about it. He tells you, his female employees, to come to him if you’re ever feeling discriminated against, because he really, really wants to believe he’s provided a safe and equal working environment for you ladies. And he’s just so hurt by these accusations. God, is he hurt.

A. Take a deep breath. Then let it out in a full-throated scream of rage. Don’t let up until the windows shatter and even then keep howling like a banshee. Your fellow employees may join you or they may not. Regardless, don’t stop shrieking until every pane of glass—including the screen of his computer and his company-issued phone which he barely uses because he can’t even send a fucking email without your help though you haven’t seen a cost of living increase in three goddamn years—has been reduced to uselessness.

B. Join hands with the other women in the room until you collectively transform into a hydra. Take turns spitting acid at your boss until, blind and helpless, he screams out that he finally understands the error of his ways. He doesn’t. He just wants the pain to stop. Keep spitting.

C. Hack into the company records. Find each and every pay stub which clearly proves that a woman was being paid less than a man for doing the same job. Don’t forget the contracted custodial staff: since this work is usually off the books, you may have to conduct interviews, but you’ll find that all of these women, mostly immigrant women, were being paid less for a day’s work than your boss earned in a lazy minute on the phone with his mistress. Go to your boss’s house and mummify him in these reports. Don’t forget to remove his organs first and store them in canopic jars. You take pride in your professionalism, as well you should!

D. Send your warbots to slaughter all bosses, everywhere. Male or female, the problem really is power dynamics and bosses, isn’t it? As your warbots slay, they intone the mantra: “ONCE THE SYSTEM IS DESTROYED THE BULLSHIT WILL STOP.” Is this mantra true? You’re not sure. But you’re willing to find out.

3. A male friend makes a dumb sexist joke. How do you respond?

A. Scream “HA HA THAT WAS SO FUNNY! YOU ARE THE FUNNIEST FUCKING MAN ON THE ENTIRE FUCKING PLANET! HOW DOES IT FEEL TO BE SO FUCKING FUNNY ALL THE FUCKING TIME???” Keep screaming until he runs away. Chase after him, still screaming.

B. Unhinge your lower jaw like a python and devour him. As you digest him slowly over several months, you may find that you have to burp more often than usual. Oddly enough, each burp comes out as a giggle.

C. Write a long email, detailing all the ways in which your friend’s subtly misogynist behavior, then and now, has frustrated the shit out of you over the years. Afterward, fill the time his shocked absence will leave in your life with learning a new skill, like crochet, or how to carve delicate goblets from the skulls of your former friends.

D. Having seized a satellite and turned it into an orbital weapons platform, rain fire down on the earth until he apologizes. Then, just to be safe, keep firing.

A. A dress that combusts à la The Hunger Games, except that the flames consume everyone within a half-mile radius.

B. A dress that turns into an earthquake.

C. A dress that fires invisible poison darts. The poison leeches slowly into tear ducts over many years, turning those who dared to weep into pillars of highly polished stone.

ADD UP YOUR ANSWERS

You’re a walking inferno of blind, howling rage. That’s fantastic, and we salute you. Just make sure you aren’t holding back for fear of upsetting people. There is no limit of acceptability for a woman’s anger. A woman’s feelings can never be “too much”. The world needs to start getting scared of upsetting you.

You’ve become so furious that the borders of your body literally dissolve. Amazing! Just don’t forget to take care of yourself afterward. Once you’ve dealt with the daily misogynist outrages, reconstitute your shape and treat yourself to a lavender-scented bubble bath. You’ve earned it.

You’ve become polished, methodical. A true artist of female vengeance. But while it may be tempting to cling to tried-and-true methods, don’t hesitate to devise increasingly diabolical punishments, each more cunning and vicious than the last. People may not understand your methods, but they’ll certainly learn to respect them.

You take no prisoners. Literally, your warbots have been programmed to never capture misogynists alive. You’ve shown incredible initiative in the broader battle against the patriarchy, and we cannot praise you enough. Just make sure you destroy the entire system, root and branch. The war is only over when you’re certain that your daughters­—and sons—will never have to endure the soul-destroying bullshit that is systemic misogyny.