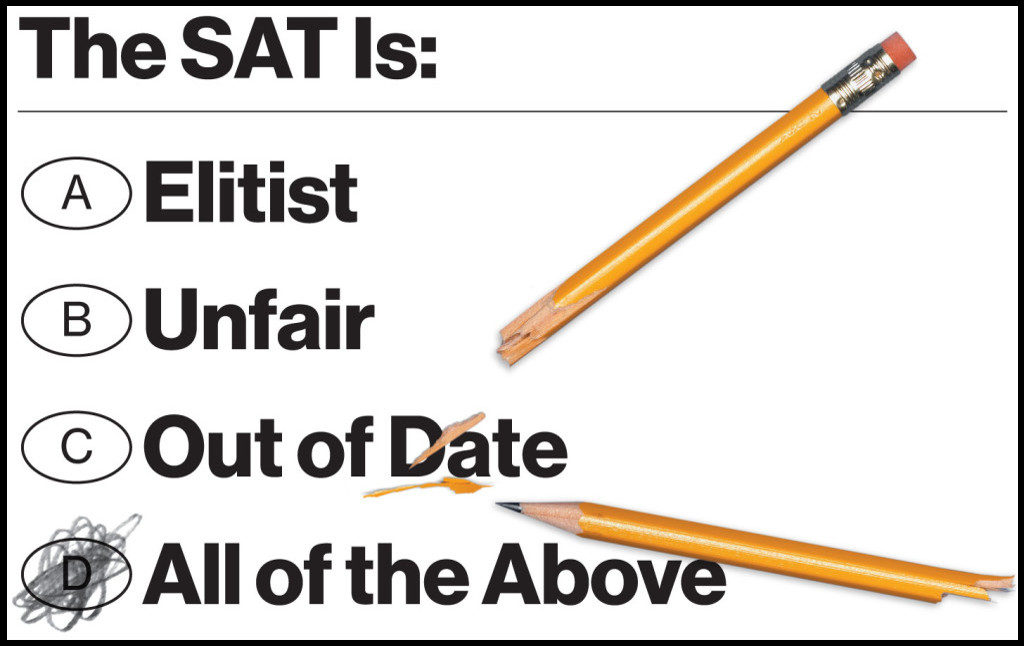 Instead of defending the SAT, let’s advocate a genuinely egalitarian education system…

There is no fair way to create a meritocracy. This is because the notion of “merit” is itself loaded with unfair premises. People will always have differing life histories, capacities, and opportunities, and so any assumption that those who “rise to the top” of a competition have superior deservingness will be false. That doesn’t mean that everyone is equally qualified to be a surgeon or a structural engineer or a social worker, or that there should be no evaluations to make sure the people who have certain jobs can do them. Instead, it means that we can never conclude that people got those qualifications did so because they “earned” it more than others, and we should be skeptical of any idea of a “fair competition.”

For the left, that’s important because it leads us to the conclusion that while some people may be better suited to certain jobs, the fact that they are better suited does not mean they deserve more compensation or social prestige than everybody else. Egalitarians don’t believe everybody should be the same, we believe that nobody is worth more than anyone else. That’s why we don’t just support having the “equal opportunity” to win a competition and get more than other people, we believe that life shouldn’t be competitive and that, to the extent people are measured, it should be against their own abilities rather than other people’s. (“From each according to his ability…”)

In Jacobin, Freddie deBoer has published a “progressive case for the SAT,” defending the standardized college-admissions test against criticism. Many leftists dislike the SAT, and have said that it is unfair, biased both economically and racially. It rewards people for being good test-takers above all else, and wealthy students are better able to prepare for it than non-wealthy students. DeBoer believes these criticisms are misplaced, and that “if you believe in equality and a more level playing field in college admissions, you should defend the SAT.” While SAT results “reflect inequalities in race and social class,” he says, this is less a problem of the SAT than of society itself. Every potential competitive college admissions system will reflect these inequalities, and deBoer argues that the SAT is the least bad of the available options. If we move, as some SAT critics propose, to a more “holistic” system of student evaluation, this will be no less easily “gamed” by rich parents, who have “far greater ability to provide opportunities for extracurricular (and frequently out-of-school) activities than less affluent parents do.” Contrary to what we might assume at first, “favoring the ‘soft’ aspects of a college application is straightforwardly beneficial to the more privileged at the expense of the less.” The SAT, whatever its deficiencies, is better than using grades or holistic evaluations. Using grades encourages grade inflation, and holistic evaluations will just mean that parents pay for community service trips to developing countries rather than test-prep courses. The SAT has the advantage that it is open to everyone, and deBoer says that the test-prep courses aren’t nearly as effective at rigging the system as is commonly assumed. Thus “the casual assumption that de-emphasizing or eliminating the SAT will result in a more equitable system doesn’t withstand scrutiny.” Instead, “a stellar SAT score is potentially one of the most powerful” ways that “students who labor under racial and economic disadvantage” can “distinguish themselves from the rest of the pack.”

There are two conclusions here, one of which I agree with and one of which I find objectionable. The conclusion I agree with is that the SAT may be the “least bad” of three options for competitive admissions, when compared with using grades or Mushy Holistic Factors, and that therefore eliminating the SAT alone won’t in and of itself produce greater equality and could backfire. (I even have a certain soft spot for the SAT because it enabled me, a person who didn’t know any of the weird upper-class “holistic” signals that impress colleges, to go to a good college.) But the conclusion I disagree with is that this somehow makes a “progressive case for the SAT,” or that we should “defend the SAT.” This is the same logic that causes people like Nicholas Kristof to argue that because sweatshops are supposedly better than farm labor, there is a progressive case for sweatshops and we should defend them. This is one of the differences between liberalism and leftism: liberalism argues for the least bad of several bad options, while leftism insists on having a better set of options.

It’s the talk about “powerful ways” to “distinguish themselves from the rest of the pack” that troubles me. My concern is about what happens to the rest of the pack! As my acquaintance Patrick Conner put it, the difference between meritocracy and socialism is “I don’t want everyone to have a fair shot at the 15% of non-shitty lives, I want everyone to have a decent life.” Instead of arguing for the least-unfair version of the brutally competitive war of all-against-all that is the contemporary college admissions system, the progressive case should be that we ought to have an actual fair admissions system.

In other words: just admit everybody. The whole “competitive” nature of undergraduate admissions is absurd to begin with, and the very fact that students are sorted according to “merit” is socially corrosive. Let’s face it: college isn’t like brain surgery or social work. People’s lives aren’t in your hands. Instead of finding the “top ten best people” we should be selecting “anyone who has proved they are capable of doing the expected work.” Competitive admissions are as irrational as grading curves. With a grading curve, only X percent of the class will get As on their papers, even if every single person in the class wrote an excellent paper, which forces you to start making silly and arbitrary distinctions in a contrived effort to pit the students against each other. The better way to grade is by developing a standard independently and giving students a qualification if they meet the standard. Here’s the admissions parallel: everyone who shows themselves capable of doing the work required of a Harvard undergrad is marked “qualified” for Harvard and allowed to apply. There are a limited number of places, of course, but those places will be filled by selecting a random group of students from among all of those marked “qualified.” You might still get a very low percentage of applicants admitted because space is limited, but it won’t be because those applicants have been deemed worthier, it will be because the lottery happened to favor them.

My vision of universities is as a place where anybody can come and learn, so long as they can do the work. Now, you could argue that at elite schools, the work is so hard that only a few people would be qualified to do it. That’s false, though. I have been a TF at Harvard, so I am acquainted with the level of rigor in the undergraduate curriculum, and it’s obvious that vastly more students than the 4.8% they actually admit are capable of passing the courses. In fact, possibly the majority of the applicants could do fine. We know that college admissions are a crapshoot. But let’s just make them an actual crapshoot, so that nobody would be deluded into thinking that merit was involved, beyond the merit of basic literacy and numeracy.

We might have a different system at the graduate level, where higher levels of specialized skill are required. But I think the same principle should be followed: set a clear standard for the minimum a student needs to be able to do. Make that standard public, so that everybody knows that if they can do X they will have the same shot at being admitted to a program as anybody else. Then choose at random from among those who have met the basic standard.

Alright, so you can probably come up with half a dozen criticisms of this system, the way you can criticize the idea of a randomly-selected congress or a jury trial. Colleges will raise the “basic standard” to unrealistic levels and thus recreate a highly-competitive admissions system, and Harvard will start pretending that you need to be able to do calculus in order to muddle your way to a Bachelor of Arts there. (You don’t.) As long as you still have underlying social and economic inequalities, you can’t actually have an equal system, because everything will reflect those inequalities until we get rid of them. Rich parents will always find ways to make sure their children get more than other children. This is part of Freddie’s point, and he is right: instead of fixing the admissions system you have to fix the economic system, because you can’t isolate the one from the other. It’s an important point, but it doesn’t amount to a defense of the “meritocracy” illusion or the concept of “distinguishing from the rest of the pack.” And the left’s education experts should be devising practical alternatives to meritocracy rather than slightly-less-awful versions of it.

We should always be clear on what the goal is: a world in which we don’t all have to fight each other all the time, where we can work together in solidarity rather than having to wage war against our friends for the privilege of having a good job. There is no reason why everyone shouldn’t have equal access to the highest-quality education, and in a properly organized society it would be perfectly simple to provide it. We don’t need “best” and “worst” universities, ranked from top to bottom, we just need “universities,” places where people go to explore human knowledge and acquire the skills that enable them to do things that need doing. Progressive education means an end to the illusion of meritocratic competition, an end to the SAT, and the realization of a vision of equal education for all.