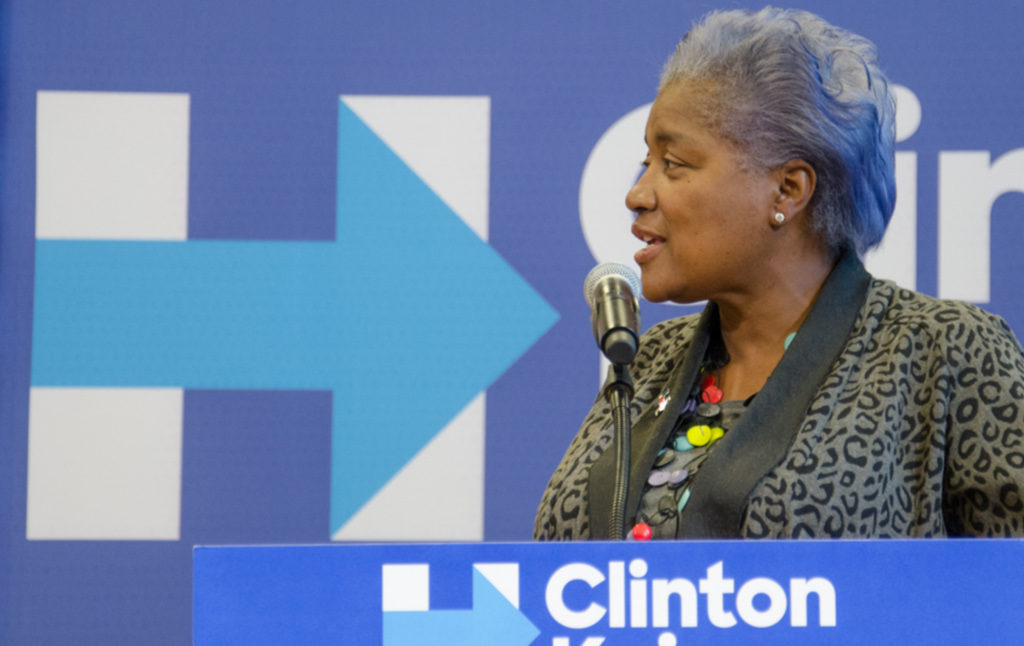 In today’s most-shocking, least-shocking news, it turns out the Democratic National Committee was laundering money and funneling it to Hillary Clinton’s campaign, long before Clinton received the party’s nomination, and the party had been entirely controlled by Clinton since before she even declared her candidacy.

I hear you gasping. But I assure you, it’s true. And the reason we know it’s true is that we have it from one of the figures most associated with pro-Clinton partisanship: Donna Brazile. Brazile became infamous for using her position at CNN to leak a debate question to Hillary Clinton in advance, an ethical lapse that led the network to drop her. If there is a single person in America who cannot be accused of having an irrational anti-Hillary bias, or being a conspiratorial “Bernie Bro,” it is Brazile, whose devotion to serving Clinton above all literally cost Brazile her job.

Yet in a newly-released except from her book Hacks (the title of which refers to Russian meddling, though some had jokingly suggested it could apply to Brazile and other members of the Democratic political elite), Brazile is explicit: the Democratic National Committee was entirely under the control of the Clinton campaign, long before Clinton had the nomination. After Debbie Wasserman Schultz resigned in July 2016, having been revealed as a pro-Clinton partisan by leaked emails, Brazile became interim chair of the party. In her book, she says that the corruption she discovered upon taking the position was worse than anything Wasserman Schultz had even been accused of.

When Brazile assumed her position, she says she promised Bernie Sanders that she would determine whether it was true that Clinton and the DNC had colluded. She appears to have taken that investigation seriously: the answer, she says, “broke my heart” and made her cry. The party, she said, was deep in debt, largely thanks to Barack Obama: “Obama left the party $24 million in debt—$15 million in bank debt and more than $8 million owed to vendors after the 2012 campaign and had been paying that off very slowly.” (Thanks, Obama!) Wasserman Schultz had not scaled back the party’s spending; she had “stuck lots of consultants on the DNC payroll, and Obama’s consultants were being financed by the DNC, too.” That left the party desperate for funds.

Those funds came from the Clinton campaign, which gave the DNC an “allowance” in exchange for “control of its operations.” The DNC was “dependent on [Clinton’s] campaign for survival,” and in exchange for helping the party pay off its debts, the Clinton campaign was “using the party as a fund-raising clearing house.” Brazile explains that in order to get around maximum donation laws, the Clinton campaign solicited funds for the national and state-level parties. The states sent the money to the DNC, which “quickly transferred the money to Brooklyn.” As a result, money was drained from state parties, “leaving the states with very little to support down-ballot races.”

Brazile discovered that an explicit written agreement had been made between the Clinton campaign and the DNC, which:

“…specified that in exchange for raising money and investing in the DNC, Hillary would control the party’s finances, strategy, and all the money raised. Her campaign had the right of refusal of who would be the party communications director, and it would make final decisions on all the other staff. The DNC also was required to consult with the campaign about all other staffing, budgeting, data, analytics, and mailings.”

That amounted to handing total control of the party to the Clinton campaign. Brazile says she was horrified. Until she became interim chair, Brazile hadn’t even been informed of the arrangement as an officer of the DNC. It had all been made behind closed doors. As Brazile says, she believes this secret arrangement made the primary process unfair and unethical:

“The funding arrangement with HFA and the victory fund agreement was not illegal, but it sure looked unethical. If the fight had been fair, one campaign would not have control of the party before the voters had decided which one they wanted to lead. This was not a criminal act, but as I saw it, it compromised the party’s integrity.”

Of course, since the resignation of Wasserman Schultz, it hasn’t been news that the DNC and the Clinton campaign had maintained close ties. I doubt there’s a single Bernie voter who is surprised at Brazile’s “revelations.” But Brazile’s account is revelatory, for two reasons (1) the extent of the collusion goes beyond what we knew before. While I am sure Sanders voters won’t be shocked, I don’t think even they would have thought the situation was so unethical that it shocked the conscience of Donna Brazile, and (2) it provides almost incontrovertible proof. I believe Brazile when she says that she didn’t want to believe that anything indefensible had occurred. She, of all people, needed absolute proof before she was willing to turn on a candidate whom she had so doggedly (and, let’s be honest, unethically) served. Brazile says it was incredibly difficult to call Bernie and tell him what she had discovered. I am sure that there are plenty of people who supported Clinton who still believe Bernie lost in a fair fight, and that all complaints are simply those of sore losers. Hopefully Brazile’s testimony will cause them to reconsider. It is quite obvious that the Clinton campaign used the party apparatus to its own advantage long before getting the nomination. That’s not a fair fight. The nomination is supposed to be decided by the voters, not by who happens to have the most control over party fundraising at the outset. If one side has a giant money laundering operation that helps it skirt campaign finance laws, and the other side does not, the whole nomination process is tainted.

The 2016 election revealed deep flaws in the Democratic Party’s existing political model. It showed a party more concerned with placating elite donors than with actually winning elections, one in desperate need of reform. Brazile’s account confirms the major criticisms of the party that have been made by progressives. The question now is whether it’s possible to excise what Brazile herself calls a “cancer.”