Neither Good Nor Great 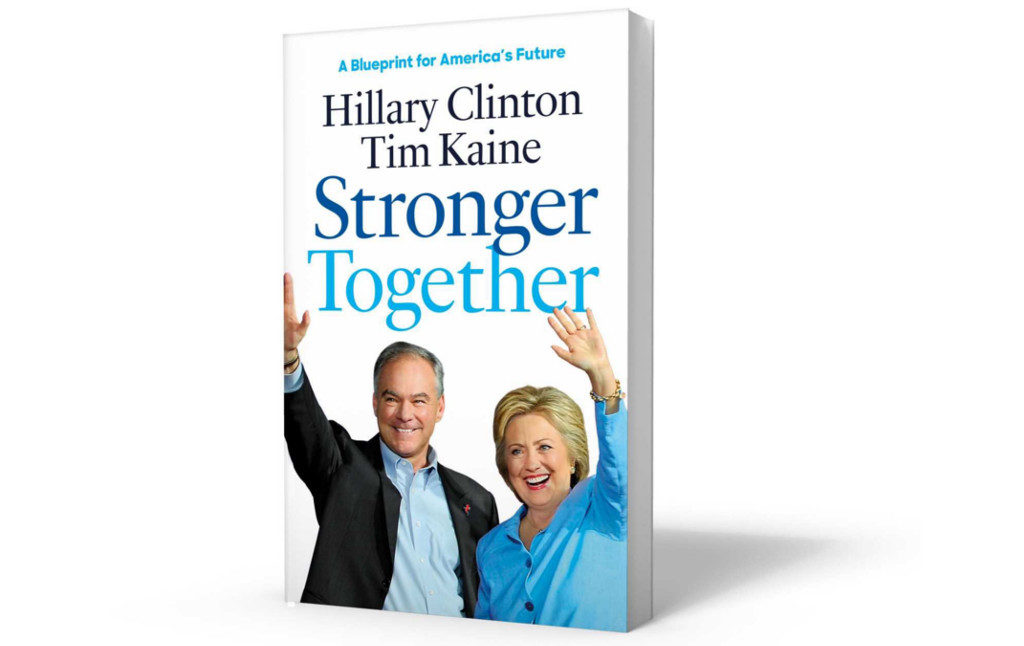 A (belated) review of “Stronger Together”…

You can understand much about why the Clinton campaign failed from the first two sentences of Hillary Clinton and Tim Kaine’s 251-page campaign book Stronger Together: “It has been said that America is great because America is good. We agree.” This bizarre declaration was a butchered quote frequently misattributed to Tocqueville. (According to Tocqueville on American Character author Michael Ledeen, “He never said that, and doesn’t believe it. He knows we’re much more complicated.”) It was also exactly the sort of thing that Clinton’s strategists and speechwriters deployed repeatedly: a political banality that sounded like something with meaning, but in fact meant nothing at all. Clinton issued the “good because great” line repeatedly during the campaign, most famously at the Democratic National Convention and second presidential debate on October 9 in St. Louis. At no point, apparently, did anyone stop and ask whether anyone thought the quote was resonating with people, or whether ordinary voters thought it made any sense.

But to the extent that the slogan was meaningful, it also turned out to be false. On November 8 we found out that America was neither “already great” (another rightly ridiculed Clinton line) nor was it even particularly “good.” The country looked at a choice between Clinton—a lifelong centrist synonymous with an American political establishment that led us into multiple wars and economic catastrophe—and Donald Trump, a well-known dipshit with a ton of money and TV show, and picked Trump, so says the archaic Electoral College. Judging from the one hundred million eligible voters who stayed home, it turns out a lot of people think America is either bad or in bad shape, and quite possibly irredeemable.

In the days following the election, Clinton channeled her inner Cheryl Strayed and went for a long hike in the woods near her family’s home in Chappaqua, N.Y. She went to the inauguration, and is working on another book.  Meanwhile, Senator Tim Kaine, her vice presidential candidate and “America’s dad”—in that he’s sorely disappointing, woefully uncool, and thinks the Hyde Amendment is good— returned to the Senate as a reliable yes vote for Trump’s cabinet appointments. Kaine voted to confirm torture advocate Mike Pompeo for CIA Director, the abysmal Bush Labor Secretary (and Mitch McConnell’s spouse) Elaine Chao to be Secretary of Transportation, “Mad Dog” Mattis for Secretary of Defense and retired Marine Corps General John Kelly — who wants a border wall with Mexico — for Homeland Security. It was only after massive protests and thousands of constituents flooded Congressional phone lines and inboxes that Kaine and fellow Senate Democrats began pushing back on certain Trump nominees, such as Betsy DeVos and Scott Pruitt.

While the Clinton campaign will go down (if we live long enough) as one of the biggest darkest jokes in American history, the whole farce is a little less funny now that we’ve been saddled with unified control over the government by the far-right and they’ve begun swinging an ax at civil liberties for Muslims, immigrants, and refugees. But the platform that Clinton and Kaine put forth during that doomed and hapless campaign, as well as their lackluster responses following its conclusion, should inform future progressive efforts on what to do and definitely what not to do.

As is to be expected, Stronger Together is utterly unreadable. It is as if someone printed out the contents of the Clinton campaign website and bound it together. Each section, labeled with insipid nonsense like “Be firm but wise with our rivals,” dedicates two to five pages to each specific, deeply complex issue, and still manages to seem entirely too long. For example, a section on bringing back manufacturing begins, “Manufacturing matters.” No shit.

The book, it won’t surprise you, is just as protective of business as Nancy Pelosi’s “We’re capitalists, that’s just the way it is” response  during a recent televised town hall. In one section, Clinton and Kaine implore American business to “break free from the tyranny of today’s earnings report so they can do what they do best: innovate, invest, and build tomorrow’s prosperity.” It then goes on to list Great Events in Business History that might not have happened if the companies backing the projects shut them down too soon. “What if Xerox had decided that its Palo Alto research park wasn’t doing enough to boost share prices in the short term?” Clinton and Kaine breathlessly ask. “A young Steve Jobs would never have visited and the personal computer revolution might not have happened.” (Here we can see the absurd logical endpoint of the “progress is made by individual entrepreneurial geniuses” view of historical change; it leads you to the laughable conclusion that desktop computers may never have come about if Steve Jobs hadn’t once stopped by a Xerox factory.)

It’s difficult for the reader not to return to the same question over and over: who is this book for? Littered throughout is a mess of statistics and charts, with little in the way of promises other than to “invest” or “expand access.” (As Bernie Sanders said in a February town hall debate on healthcare with viscerally unlikable Ted Cruz, “Access doesn’t mean a damn thing!”) Maybe the D.C. set loved this, but hardly anyone else did: according to The New York Times, the book sold less than three thousand copies in its first week.

It’s easy to see why. One paragraph, titled “Target more investment to communities left out and left behind,” includes this whopper of a line: “To increase public and private investment in these hardest-hit communities,” Clinton and Kaine write, “we will explore policies like South Carolina Representative Jim Clyburn’s 10-20-30 proposal, in which 10 percent of program dollars are directed to communities where 20 percent or more of the population has been living in poverty for 30 years or longer.” Aside from the fact that this is an incredibly convoluted way to say, “Impoverished areas need better public services,” the campaign wouldn’t even fully commit to it; they just said they would “explore” it. This lack of commitment, the embrace of compromise as a political philosophy in itself, helps to explain why Democrats have failed in recent years. If you can’t bring yourself to stand behind even your most watered-down and convoluted proposals, why should anyone think you’re going to actually accomplish anything? Not to mention the fact that these numbers seem almost entirely arbitrary. We’re only helping people in places that have been in poverty for 30 years (as opposed to 28 years), entirely because 30 goes nicely with 20 and 10?

The book’s text makes it apparent why the Clinton campaign was so strongly supported by policy wonks. Her solution to “ensure the wealthy, Wall Street, and big corporations pay their fair share,” for example, boils down to three points: a tax credit for companies that share profits with employees, up to $5,000 in tax relief for healthcare costs, and $1,200 in tax relief for caregiving. This is “pragmatism” at its finest: Clinton never shoots for the big idea, but adopts some anemic form of it that Republicans will never agree to anyway.

At the tail end of the book, there’s a seven-page essay devoted to “getting results,” a nod to Clinton’s “progressive who gets things done” dig at Sanders during the primary. “Getting results means understanding that compromise is not a bad thing,” they write, before listing off a litany of bills, all pre-dating the Nixon resignation, that passed with votes from both parties. (Democrats’ psychotic need to have at least one Republican vote in favor of every one of their bills, just so that they can say it was “bipartisan,” is what killed the public option in the Affordable Care Act.)

And therein lies the main problem with the vision that the Clinton campaign laid out: it just isn’t suited for these times. Starting from a position of compromise and non-commitment rather than proposing big solutions that are easy to rally behind—free healthcare, free public education, eliminating poverty—leads to a defeatist tone that says, “We’ve given up on making your life substantially easier and better.”

The Clinton campaign exposed deep, catastrophic flaws in the Democratic message. Only by replacing the tortuous technocratic language of white papers with ideas that can be expressed clearly, directly, and in a single sentence, can the left recapture the political imagination and combat Trumpism. The Stronger Together campaign, terminally boring and bereft of emotional force, was never going to work. Stronger Together is bad because Clintonism is neither great nor good.