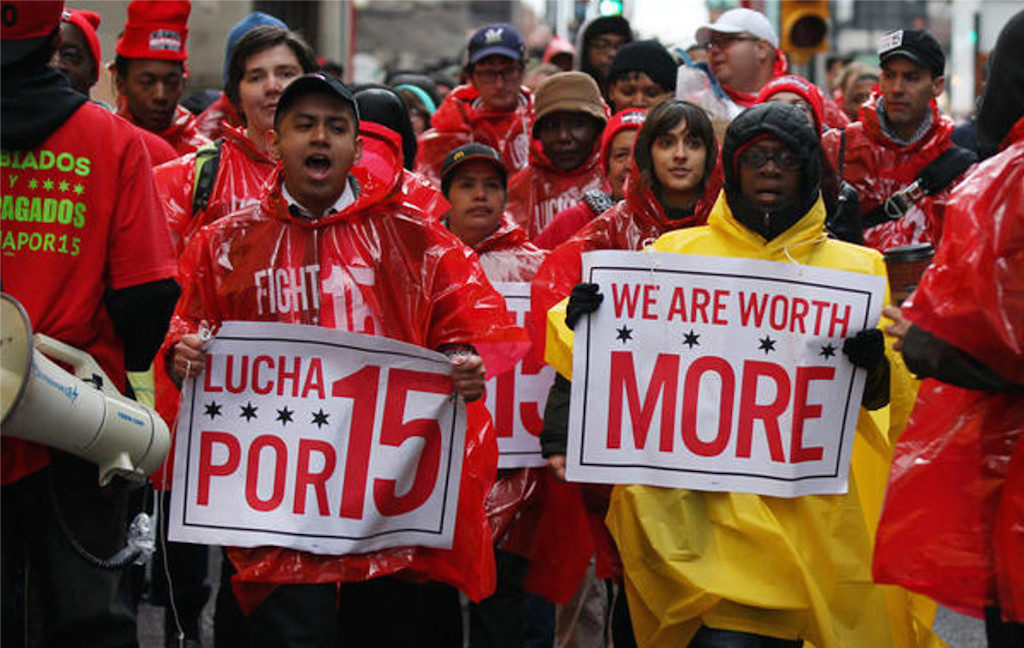 Regardless of where you stand on minimum wage laws, have no sympathy for well-off employers who say they can’t pay.

I have spent the last year and a half running a small magazine of left-wing political thought called Current Affairs. Our circulation is tiny. We carry no advertising. We have no sponsors. Our revenue comes from selling printed copies through the mail. In other words, we are not exactly the world’s most financially lucrative enterprise. It’s often a struggle to stay afloat, and we have to be very careful about our expenditures. Nevertheless: when we pay someone to do work for us, we would never pay less than $15 an hour. And if we can do it, any employer can, and anyone who says they can’t is lying.

It’s incredible that in the United States, $15 can somehow sound like a high minimum wage. With a regular 40 hour workweek, it’s $600 a week. If you never got a day or a week off, you’d be earning $31,200 a year. Maybe that’s a lot in Turkey, Texas, but if you’re in one of the nation’s major urban centers (say, Seattle), it evaporates pretty quickly. Especially if you have a child. Or two children. Or a car. Or a dependent relative. Or an illness. Or some debt. This map from the National Low Income Housing Coalition, showing how much you need to make per hour to afford a two-bedroom apartment in each state, is illuminating. Even in the states with the least expensive housing, such as Arkansas and South Dakota, you need to be earning around $14 an hour. On average across the United States, it’s about $21.

Except maybe in the most remote areas, then, or among teenagers working their first jobs, paying people less than $15 an hour inflicts hardship. It means they aren’t going to be able to live a decent and comfortable life working full-time. Even at best, especially if they have a child, they’re just going to be subsisting, with no opportunities for vacations or indulgences or any of the occasional costly pleasures that make life worthwhile. (And certainly no retirement savings.) At worst, they are going to be living a truly precarious existence, defined at every moment by the need to think about money.

Everyone should be paid at least $15 per hour, then. Period. What’s more, it’s not difficult. I’ve never run any kind of organization before I began running Current Affairs. So I didn’t know how much credence to give those Small Business Owners who are always whining about how put-upon they are. “How do you know what it’s like if you’ve never run a business?” they ask. Well, now I know. And the answer is: it’s easy. It’s easy to pay $15 an hour. If you’re not paying it, you’re not trying. You’re not making any kind of real effort to think about how to give your employees a decent standard of living.

Now, yes, there are some exceptions. I am sure some people run used bookstores and things, where you’re lucky if you even sell $15 of books in an hour. There are tiny struggling storefronts in poor neighborhoods, and sometimes workers pay other workers for services, and we should keep these cases in mind. But I also know that a lot of business owners are exaggerating the difficulty of paying a living wage. That’s been the way as long as there have been workers and owners: the story of capitalism is the story of the boss telling his employees “I’m sorry, I’d love to pay you more, but you see, then I would have to put my prices up and I would go out of business,” before driving off in a luxury car. And it’s not that there is no conceivable world in which compensating employees properly would drive a company out of business. It’s that we only know we’re in that world if a business owner is not also being handsomely compensated themselves. If they’re doing well, then all of their protestations of poverty are hollow.

Let me be clear on the point I am making here: it is not that the lawful minimum wage necessarily ought to be raised. It is that business owners who complain about having to pay living wages frequently simply haven’t tried to pay living wages, and generally just mean that they are unwilling to sacrifice their own prosperity in order to properly compensate employees. $15 isn’t actually much. It doesn’t go very far. And if you are committed to paying it, you can usually find a way.

Honestly, I was not surprised at the new study suggesting that Seattle’s raise in the minimum wage may have reduced the employment of low-wage workers. Unlike many on the left, I am perfectly open to the idea that as an empirical matter, raises in the minimum wage cause employers to reduce hours and lay off workers in ways that ultimately result in workers being paid less than they were before. (The Seattle study, by a team of University of Washington economists, suggested that the average low-wage worker saw their monthly paycheck shrink by $125.)

Now, the Seattle study is extremely controversial. A Fortune magazine writer called it “utter B.S.,” citing studies of other high minimum wage cities showing that “higher wages boost worker pay and haven’t led to either job loss or a slowdown in economic growth.” Furthermore, another study of the Seattle experience by researchers at UC-Berkeley reached the opposite conclusion: it did not find significant negative effects on employment and did find that many workers got a pay boost. Another recent study, far larger than the Washington one, concluded that the average minimum wage raise “leaves the overall number of low-wage jobs essentially unchanged, while raising average earnings of workers below those thresholds.” And when the New York Times spoke to Seattle employers, it found evidence that due to a favorable local economy, few were considering slowing down hiring as a result of the law. Everyone wants the empirical facts to support their favored political conclusions, so minimum wage advocates quickly point to the Berkeley study, while free-market libertarians gleefully embrace the Washington study while instantly dismissing the Berkeley study as “a cut above propaganda.” I don’t have a particular opinion on which study is more reliable, because I haven’t looked at them closely. But neither result would be startling. The Washington study, showing that employees had their hours reduced and lost jobs because of the minimum wage hike, could well be correct.

It’s important, though, to realize why it would be correct. What free market economists and minimum wage opponents rarely say out loud is that their models and predictions assume that capitalists and business owners are sociopathic; i.e., that they do not act in the interests of their workers’ well-being, but that their workers’ well-being is incidental and will be sacrificed as needed to ensure continued profitability. So if the minimum wage rises, a business owner will not compensate themselves less, but will try to find a way to cut back on labor costs elsewhere, say by requiring greater amounts of work over shorter periods of time. The whole reason that economists believe minimum wage raises hurt workers is that companies do not mind hurting their workers. Corporations are structured so as not to have moral obligations toward human beings, and so it would be unsurprising if they reacted to an effort to get them to behave more morally by behaving less morally.

This is why free-market economists are often right about the potential pitfalls of regulation. It’s true that if you mandate greater livability standards in housing, landlords might just push up rents and pass the cost onto the renters. Or if you set caps on rent, landlords might maintain their apartments less well. It’s a perfectly understandable consequence, but it’s important to acknowledge what this implies: that landlords act without regard for any goal other than their own financial enrichment. The empirical fact might mean that some regulation is not actually a good way of solving a problem, but the reason it will not be a good way of solving a problem is that there is often almost no way to prod a corporation or landlord into treating human beings decently, because of the nature of landlords and corporations as economic entities.

So I believe minimum wage increases should be implemented carefully, in accordance with an unbiased interpretation of the available empirical evidence. But I also believe that few employers who claim they cannot pay $15 should be trusted. They may well believe that this is true. Yet this is only because they have never given any real consideration to reducing their own standard of living, and spend very little time contemplating the question of what moral obligations one has toward one’s workforce. The fact that they’re like this is a good argument for why regulation is not enough, and why a fundamental change in who makes economic decisions should be the ultimate goal of social policy. But regardless of where we come down on the abolition of capitalism (I am for it), let’s be clear: you can pay $15 an hour. It’s not hard.