Why Republicans Are Impressive 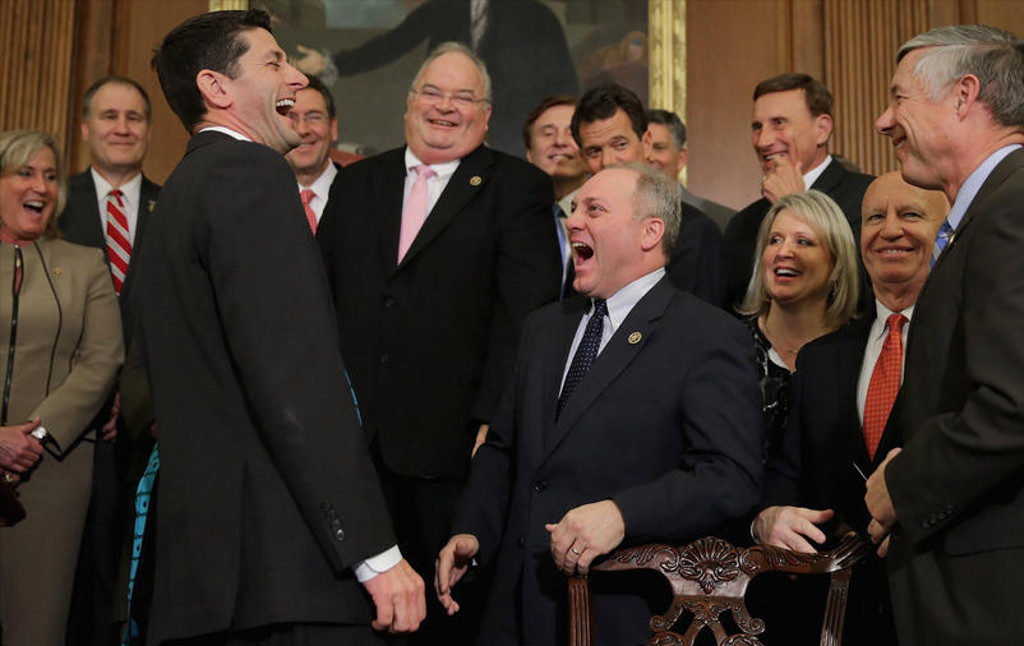 Their disciplined commitment to a clear ideology has yielded results…

Sometimes I’m just overwhelmed with admiration for the GOP.

Pick one issue at random from the extraordinarily long list of extremely radical legislative priorities they’re about to pass. How about the plot to destroy Medicaid as we know it?

Ending Medicaid isn’t an obvious or an easy fight—it’s a very efficient program that’s been part of the American social fabric for 50 years, a program with 70 million beneficiary-constituents, one vital to the survival (economic and otherwise) of some of the most photogenically unfortunate people in America (families raising kids with major disabilities, for chrissake!), and a major source of business for the gigantic and very widely geographically distributed healthcare-provision industry. It’s also very popular; only 13% of Americans support slashing Medicaid. And no wonder: 63% of Americans say that either they or a close friend or family member has been covered by Medicaid at some point. It’s not even arguably in any kind of crisis; there’s no obvious reason to touch it.

So for Republicans, going after Medicaid is picking a big fight, one they could easily dodge. But that won’t stop them. They know that destroying this kind of program is key to their vision for America, both ideologically and in terms of budget math. They’ve known it for years, and they’ve been releasing plans and focus-grouping and developing consensus for years in the wilderness, and now they’re tanned, rested and ready. And for 95% of their congressfolks it’s not even a question—they’ll vote yes. They’ll do it in the smartest possible way, too: they’ll say there’s a fiscal crisis and it’s necessary, they’ll say it’s not a cut it’s just market efficiency, they’ll use block-granting to disown the cuts that happen and lay them on the states, and then wait till the cuts reduce the program’s popularity to mop up what’s left. Most Americans won’t really believe anyone would do what the GOP is about to do until it’s too late.

And hey, maybe they’ll even lose a couple of Congressional races over it, but the Dems won’t be in a strong enough position to reverse the cuts for years and years, and starting a program like this is much harder than ending it. Once it’s gone, it’s gone.

Medicaid is one example among many. On issue after issue—Medicare, financial deregulation, upper-class tax cuts, environmental deregulation, the destruction of public education—the GOP is committed to pursuing a profoundly radical and often deeply unpopular agenda. Remember all those “symbolic” votes repealing Obamacare and so forth? They weren’t symbolic, they were dress rehearsals, opportunities to build party consensus around reforms and enforce discipline around them. This is why analogies between the Republicans today and the Democratic Party in 2008 are so misguided: the Democrats were divided among themselves and committed to building bipartisan consensus, and the laws they passed in 2009—Obamacare, the stimulus bill—were compromised (some would say crippled) accordingly. The GOP is prepared to ram through its agenda with iron party discipline and understands very clearly that bipartisanship is neither possible nor necessary.

This asymmetry is what’s so impressive about the modern Republican Party. It’s not just that they’ve won, but that winning has put them in a position to enact an extraordinarily ambitious and radical agenda, one which will in the course of a few months destroy pillars of American government that have stood for fifty years or more. If Democrats are ever to be in a position to pass their own agenda (or merely to undo the damage that’s about to be done), they need to play close attention not only to how the Republicans won in 2016—a question over which much ink has been spilled—but to how the Republicans transformed themselves over a much longer timeline into a party that could transform the country when it won.

The lesson is this: in modern American politics, having an ideologically coherent and disciplined party is an advantage, not a liability. This flies in the face of conventional wisdom: during the 2016 primary, many Democrats, especially those who supported Clinton, worried about the “purism” of the party’s younger and more progressive wing: would it force the party to confront a choice between nominating ideologically progressive candidates who would be unelectable and facing mass defections to its left? After all, it was widely understood that candidates needed to “pivot to the center” to win general elections. Clinton’s claim to be a “progressive who gets things done” was founded on this assumption: the notion was that Sanders’ policies, even if you found them desirable, were unlikely to get done because it was too extreme, while Clinton’s was closer to the center and therefore more achievable. Yet in 2017 the most extreme political party in decades seems poised to get more things done than any party since the Johnson administration. What’s wrong with the conventional view?

The notion that it’s easier to pass moderate policies than extreme ones takes its plausibility from the notion of the average or centrist voter. You can read about this voter in polling on policy issues. If your policy is fairly close to the views of the centrist voter, he’s likely to vote for you and you’re likely to win elections; the farther you get from this average view, the more difficulty you’ll have. An extreme candidate will turn off centrist voters for the simple reason that they disagree with him. (It is through this logic that Mother Jones’ Kevin Drum mistakenly concluded that Bernie Sanders would have lost against Donald Trump.)

The trouble with this theory is that in modern US politics it is by definition impossible for a major party to embrace policies which are “extreme” in the sense of “far from the consensus views of the average voter.” The average voter’s policy views, to the extent that these exist at all outside this context other than as artifacts of polling, are largely determined not by any particular factual information about the issues or ideological commitments concerning the role of government but by the policy positions of the major parties. If one of these parties embraces a particular position on any given issue, the 40% of American voters who consistently support that party will come to adopt that position wholesale, while most of the rest will come to believe (and be encouraged by the media’s carefully even-handed reporting to believe) that this position is at least reasonable and defensible if not correct. There are very few views so extreme and so indefensible that they can’t garner mass support if repeated frequently enough by a major US party—just think of “global warming is a hoax.”

Republicans understand this in a way Democrats don’t. Just compare Republicans’ rock-solid unity on doing nothing about climate change to the Clinton campaign’s decision to abandon a carbon tax on the basis of internal polling. Republicans don’t look at polls and think “we need to moderate our platform because Americans don’t support starving the poor to death, and we’ll get negative media coverage”; they work hard over the course of many years to shape public opinion until it says what they say. They know that if a major US political party puts out a consistent and coherent message for long enough, the polls will change and the media coverage will change. Significantly, Republicans are also much better positioned to exploit this dynamic because of their internal unity; while there is considerable debate within the Democratic congressional caucus about whether to undertake serious action on global warming, Republicans are absolutely unified on the issue. A united front allows them to deliver an extraordinarily coherent and consistent message over the course of decades in a way Democrats can’t match.

If ideological discipline is no great obstacle to getting elected, it’s also an enormous advantage once you’re in office. The Democrats’ need to corral DINOs like Ben Nelson and Joe Lieberman into the caucus in order to pass Obamacare and the stimulus bill didn’t just make those laws worse on the merits—they did enormous damage politically. A too-modest stimulus meant a slow economic recovery and contributed to the electoral carnage of 2010, while the changes to Obamacare made to please centrists made it a less popular and ultimately a less politically sustainable law.

The right wing of the Republican Party has spent an enormous amount of time and energy over the past decade running primary challenges against moderate Republicans and replacing them with fire-breathing extremists. Many said this would render the party increasingly unacceptable and unelectable outside deep red states. That hasn’t happened. Instead, far-right Republicans have moved not only their party but the country as a whole to the right; they’ve shifted the terms of the debate and are poised to pass the most radical and comprehensive legislative package this country has seen since 1968.

This is what an ideologically disciplined and unified party with a coherent vision for America, a genuine messaging strategy and the ability to play the long game can do. It’s not a recipe that guarantees winning, by any means; elections are unpredictable beasts. But in a two-party system you’re bound to win eventually. And ideological discipline means that when you win you’re ready to shove your agenda down America’s throat wholesale and change the country for generations. It’s an extraordinary accomplishment. Democrats wondering how to make radical change in this country could do a lot worse than to pay close attention to what the Republicans have done for the past 20 years—and what they’re about to do next.