How Pundits Get Everything Wrong And Still Keep Their Jobs 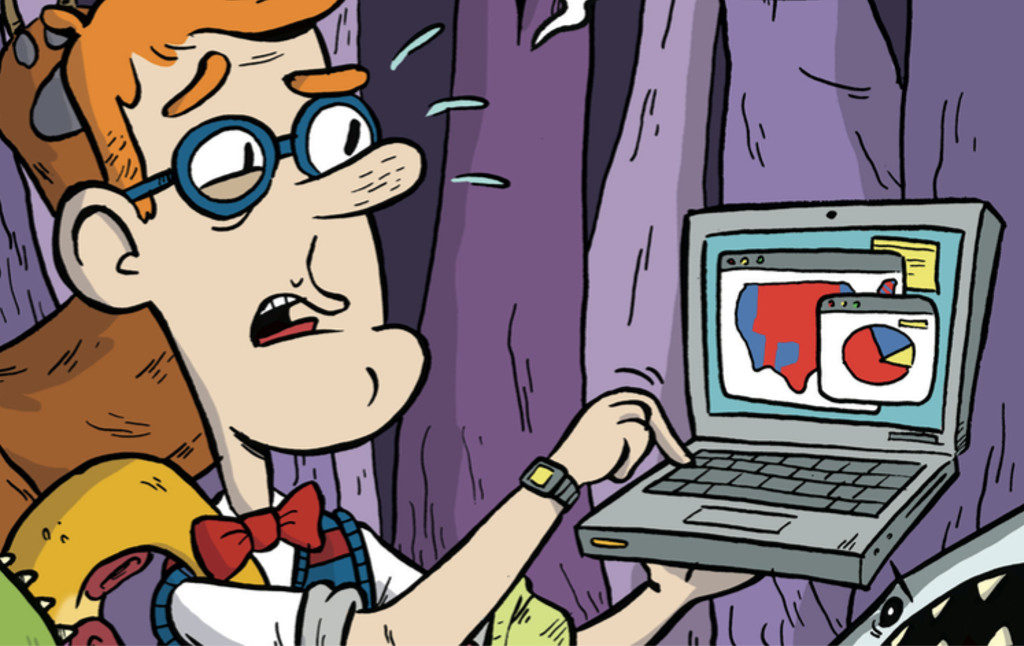 How many times can commentators screw up and still keep commentating? As many as they like…

Understandably, the elite media class is eager to move swiftly onward, as if nothing just happened. They might have been directly complicit in one of the most cataclysmic mass analytical failures in modern US history, but no matter: there are ever-more predictions to be made, more rash surmises to blithely proffer. Self-criticism and introspection—who needs it? After all, the natural state of the pundit could be described as “impulsive predictivity,” the unceasing drive to be constantly telling audiences what will happen in the indeterminate future, as if you possess some amazing insight that renders your predictions uniquely clairvoyant.

But as the 2016 presidential campaign should have conclusively demonstrated, this pretense of expertise is a fabrication. Far from being especially prescient about matters of public affairs, members of the Pundit-Commentariat Industrial Complex are actually incredibly ill-suited to the task of accurately gauging the political sentiments of their own nation. By virtue of the various self-destructive pathologies that perpetually dull and distort their analytical acuity, it turns out that “pundits” are among the least qualified to accurately predict how far-off events will unfold. Surveying a random selection of Twitter trolls would probably yield one better information than scanning the output of the most revered professional prognosticators.

We still have not yet fully taken stock of how systematic and massive was the scope of the failure which gave rise to Donald Trump; it permeated virtually every sector of elite society, from the culture-producing entertainment industry, to high finance, to the “political operative/consultant” cabal—right on down to the journalism/commentary racket. But it may be most fruitful to begin by thrashing the 2016 pundits, whose mixture of arrogance and ignorance is almost unmatched in the history of letters.

The notion of a “pundit” is nebulous and fluid. Its definitional boundaries are always shifting. Indeed, “pundit” can be taken to mean anyone who opines on TV about politics, or it can refer to the distinguished group of people employed by well-regarded national magazines to espouse political opinions, often with a sheen of intellectual gravity. Though there’s plenty of blame to go around, it’s worth lingering on the failings of a certain kind of pundit—the “writes regularly for prestigious online opinion journals” kind. The paradigmatic pundit of this character is firmly ensconced in the peculiarities of the contemporary social media-driven click-economy—it’s all he’s ever known.

One liability of having a geographically-clustered, incestuous pundit class is that they almost all know each other. They all reside in the same one or two cities and are members of overlapping friendship circles. This social proximity will inevitably cause a certain kind of in-group solidarity and excusing of failure; that’s human nature, and it’s understandable. We’re more willing to give our friends a pass. Though the nature of the internet enables pundits to write banally on politics from virtually anywhere, they nevertheless all flock to New York City and Washington D.C., whereupon they forge strong social bonds with colleagues and “after work” drinking buddies—and then wonder why they are all hopelessly consumed by groupthink and confirmation bias. 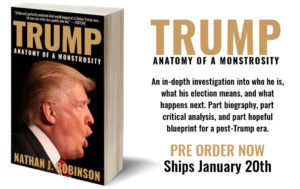 Jamelle Bouie of Slate and Brian Beutler of The New Republic are examplary members of this rising pundit cohort: young-ish prognosticators with an avowedly liberal bent, who came up through the fledgling “new media” ecosystem, and who originally endeavored to upend the existing pundit order. Bouie and Beutler merit special attention as case studies because they epitomize the “digital native” pundit—namely a coterie of 20 and 30-somethings concentrated in the “Acela Corridor” who regularly receive outsized praise for their allegedly bold commentary. They also happened to spend the 2016 presidential cycle advancing theories that proved utterly, flagrantly wrong.

Throughout the campaign, Bouie churned out a series of wildly inconsistent opinion pieces about Trump, alternating between warning the country that it was about to be swallowed up by fascism and reassuring liberals that Hillary Clinton had the election in the bag.

To give a flavor for Slate’s politics coverage, witness two Bouie headlines from only a week apart: “Donald Trump is a Moderate Republican” (November 19, 2015) and “Donald Trump Is A Fascist” (November 25, 2015). Now, the word “fascist” has meaning (or is at least supposed to). Anyone who actually believed Trump to be a fascist should now be out proclaiming far and wide that a fascist has just won the presidency—indeed, Bouie would be justified in attempting to foment violent insurrection and perhaps even a full-on coup d’état to ensure that Trump, the purported fascist, is prevented from taking the reins of state. As a preeminent pundit with sought-after insight, Bouie would in fact be obliged to vigorously sound the alarm, and maybe even take up arms himself. Instead, he recently joined the host of Slate’s “Culture GabFest” for a discussion entitled “Will Late-Night Shows Help Us Laugh Through a Trump Presidency?”

It is not unreasonable, then, to surmise that proclamation that Trump is a “fascist” was more a provocation for clicks than any sincere attempt at political categorization. Whether Bouie ever perceived any disjunction between those competing November 2015 theses of “Trump as unprecedented fascist threat” and “Trump as slightly more vulgar run-of-the-mill Republican” remains unclear. (Bouie did not reply to a set of written questions.) One suspects, however, that these ideas were far more a product of Slate’s daily demand for edgy but ultimately hollow hot takes than of considered and honest analysis.

Not only was Bouie’s political philosophy both inconsistent and insincere, but his predictions were laughably disastrous. On August 24, Bouie averred in his Slate column:

“There is no horse race here. Clinton is far enough ahead, at a late enough stage in the election, that what we have is a horse running by itself, unperturbed but for a faint possibility of a comet hitting the track. Place your bets accordingly.”

So to be clear, Bouie likened the odds of a Trump victory to the odds of an extra-terrestrial mass extinction event. He even began performing postmortems before the election had been held:

“Donald Trump is a dud of [sic] politician who squandered his advantages in a winnable election. More than just a bad candidate, he has been a catastrophe for the GOP itself… On Nov. 8, nearly 18 months after he announced his bid for the Republican presidential nomination, the saga of Trump will come to a close.”

Perhaps Bouie reckoned that if he wrote enough columns conveying absolute certitude, he could will Hillary Clinton to victory. Whatever Bouie’s motive, he clearly failed spectacularly. Bouie had “one job,” and that was to accurately inform his readers about what was going on in the electorate. In this narrow task Bouie failed. What will be the consequences? (Hint: there will be no consequences.)

Brian Beutler was christened an avatar of the Washington, D.C. “power elite” by the New York Times at the ripe old age of 28, which in 2011 profiled him and other members of the so-called “Juicebox Mafia,” a cluster of hyper-wonkish young men who supposedly constituted the future of political commentary. (Notably, the profile appeared in the Fashion section.)

A hallmark of induction into said elite is becoming bizarrely out of touch with the rest of the country. By this standard, Beutler proved himself a highly qualified member. But unlike pundits of old, Beutler has evidently shunned the practice of on-the-ground reporting, which was once critical to the pundit’s self-conception. Even people like the late David Broder of The Washington Post, once the purest embodiment of the establishment commentator, frequently traveled the country and talked to voters; it’s unclear if Beutler ever left Washington, D.C. during the entire election cycle. (Beutler also did not reply to a submitted set of written questions.) Instead, he sat at his desk, like Bouie, and declared Clinton victorious without deigning to converse with voters. On October 19th, he wrote: “This race is over. It has been for some time.”

But worse than the bad predictions, Beutler made a point to heap regular contempt on ordinary voters whose views diverged from his own. He spearheaded a meme, popular among D.C. liberals, which essentially held that Trump supporters couldn’t possibly be motivated by anything resembling “economic anxiety.” Beutler and friends would find a Trump supporter saying something eccentric or racist, and tweet it with the sarcastic caption “economic anxiety.” The meme implied that the Trump phenomenon very obviously had no basis in the genuine anxieties of an immiserated, dislocated white working class depredated for decades by a hubristic economic elite. To the commentators scoffing at “economic” issues, Trump’s support was little more than pure, old-fashioned racism. Beutler hammered home the point unceasingly, winning bountiful likes and retweets from his fellow “new media” compadres, who naturally found the routine absolutely hilarious.

Of course, post-election analyses, including by the pundits’ own beloved FiveThirtyEight, have demonstrated that Beutler’s smug dismissals were entirely misplaced: economic anxiety was in fact a predictor of Trump support. “It is clear that the places that voted for Trump are under greater economic stress, and the places that swung most toward Trump are those where jobs are most under threat,” wrote FiveThirtyEight’s Jed Kolco. Additional studies have verified this correlation.

If you are a professional pundit, and your sole job is to accurately discern trends in the American electoral landscape, why on earth wouldn’t you feel compelled to venture out and do some actual reporting? Either it’s out of sheer laziness (certainly a distinct possibility) or an inherent skepticism that reportage has any analytical value. To the new generation of pundit, sitting around refreshing FiveThirtyEight nineteen times a day is a sufficient substitute for going and actually speaking to the people whose political opinions you purport to be an expert on.

The central assumptions on which The New Republic’s senior political editor and Slate’s chief political correspondent based a huge portion of their election analysis proved utterly, humiliatingly wrong. Of course, this will not redound to their discredit. That’s because the pundits inhabit an environment whereby the normal incentives for success and failure are precisely inverted compared to those under which most Americans labor. For normal people, even the tiniest mistakes often result in drastic consequences. They don’t just get to ignore those failures and barrel forward as if nothing happened. And yet that’s how we permit the pundit class to operate. In the case of Bouie and Beutler, it wasn’t merely that they made erroneous predictions; anyone can mistakenly guess that something might pan out, when it does not. Rather, their entire analytical framework was drastically, catastrophically faulty. If any other American worker had performed his or her job so poorly, they could expect to receive severe sanction—docked pay, unfavorable scheduling, or termination. But in the world of punditry, there is no price to pay for failure. Instead, the American pundit class simply carries on as before, rattling off self-assured predictions about future events.

It thus should not be mysterious why Americans are increasingly disdainful of the media class; they see them failing over and over again, but no punishments meted out. They know intrinsically that the pundits are shielded from anything that they’d recognize as professional accountability. And for what? The pundits provide no useful service; they opine from the comfort of their Washington domiciles. Maybe it’s the pundits’ jobs that should be outsourced, rather than the jobs of the “economically anxious” who they so delightedly mock.

The third and final part of our “How the Press Failed You” series. Part I was on Nate Silver. Part II was on New York Times commentators.