The Democrats Are Making A Suicidal Mistake 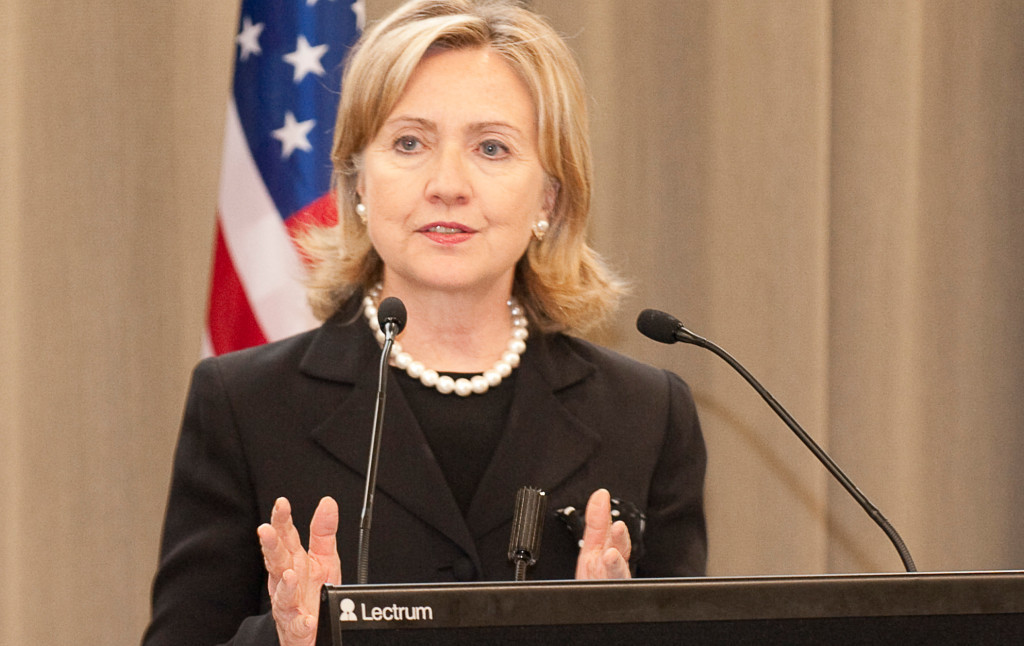 As a report undermines her statements about the email server, and polls show Trump drawing even, the Clinton campaign is quickly becoming a disaster.

Somewhat predictably, Hillary Clinton’s campaign has become a sinking ship. All of the lessons that should have been learned after her 2008 run failed so badly (that voters’ trust in her diminishes with each word she speaks, that her campaigns are woefully poorly run, that Bill is a liability) have been ignored, as the Democrats press forward with what looks like a doomed strategy.

Things were already looking bad when new polling showed that Trump had drawn even with Clinton, or was actually beating her (something Democrats have insisted is impossible). Now, the Inspector General for the State Department has released a report that contradicts large parts of Clinton’s story about her email server, which was already a highly troublesome and persistent issue.

The report hands the Trump campaign a powerful issue to deploy against Clinton. As the New York Times reported, it has numerous damning portions:

The inspector general found that Mrs. Clinton “had an obligation to discuss using her personal email account to conduct official business” with department officials but that, contrary to her claims that the department “allowed” the arrangement, there was “no evidence” she had requested or received approval for it… Department officials told the inspector general’s office that “Secretary Clinton never demonstrated to them that her private server or mobile device met minimum information security requirements,” the report said. The report also criticized Mrs. Clinton for not adhering to the department’s rules for handling records under the Federal Records Act once she stepped down in January 2013… The rules governing emails under previous secretaries were, the report said, “very fluid.” By the time Mrs. Clinton came to office, however, they were “considerably more detailed and sophisticated,” spelling out the “obligation to use department systems in most circumstances and identifying the risks of not doing so.”

The Clinton campaign quickly released a statement arguing that the report had in fact exonerated her of wrongdoing. But even the Times, whose Clinton coverage is generally extremely sympathetic (they are the paper, after all, that went back and re-edited a news piece about Bernie Sanders to avoid making it seem too complimentary), seemed unable to stomach this attempt to twist the report’s findings. The Times makes clear that the Clinton campaign’s response to the report ranges from distortion and omission to at least one outright lie. Clinton’s statement insists that “As this report makes clear, Hillary Clinton’s use of personal email was not unique.” But as the Times replies, the report actually indicates that “Mrs. Clinton’s use of a private email and server stored in her home was, in fact, unique.” Thus the Clinton campaign has responded to the report by simply pretending it says something other than what it actually says.

This is a useful exemplification of a disturbing recurrent Clinton trait: responding to criticisms that she has lied by telling… even more lies, thus causing the whole thing to degenerate further down into disaster. It’s the same tactic Clinton thought would work when she was called out on her claim about ducking sniper fire in Bosnia. There, Clinton said that she remembered “landing under sniper fire”; “There was supposed to be some kind of a greeting ceremony at the airport,” Clinton said, “but instead we just ran with our heads down to get into the vehicles to get to our base.” “There was no greeting ceremony,” she later repeated. CBS News then pointed out that this was false, and that the footage contradicted Clinton’s statement. The Philadelphia Daily Inquirer then asked Clinton why, if there was no greeting ceremony, there was footage of her calmly meeting a little girl on the tarmac. Clinton replied “I was told that the greeting ceremony had been moved away from the tarmac, but that there was this eight-year-old girl, so I can’t rush by her, I’ve got to at least greet her. So I greeted her, I took her stuff, and I left.” CBS then reported that once again, Clinton was lying. In fact, she lingered for ages on the tarmac in a highly elaborate greeting ceremony, not only meeting the little girl, but shaking hands with a large group of military officials individually, taking photos, and staging a group picture with an entire class of 7th graders.

The lie about ducking sniper fire is the one most often discussed, but it was actually the second lie (the lie about the lie) that was far worse. Asked why she greeted a little girl if there was sniper fire, Clinton simply made up a story about how she didn’t want to break the little girl’s heart by fleeing from the danger, even though there was no danger and she did much more than greet the girl and run off. This was much, much more egregious than the initial lie, because it was a deliberate fabrication rather than a false memory. After she had been caught, telling the truth would have been fine. She could have simply said that our minds often tell us stories that aren’t true, we think of ourselves as braver than we actually were, and things we hear about others doing become misremembered as things we ourselves did. Yet rather than do that, Clinton became defensive, and created a whole new falsehood in which she bravely refused to rush away from the tarmac so that a little girl could meet her.

The sniper fire story itself is trivial. But her response to it suggested that whenever Clinton is caught out, she will simply become even more shameless, hoping that at some point people give up and stop pressing her. This dynamic is, of course, familiar to all children who have attempted to pile untruths on top of untruths in the desperate hope that a certain number of lies will eventually cancel each other out. But as every child learns, this only ever leads to further trouble and, sooner or later, you just have to come clean and admit that you’ve been dishonest.

But it’s quite clear that Clinton will never, ever do this. Even now that the State Department’s Inspector General has released a report explaining in detail why Clinton’s claims about her emails are false, she has responded by doubling down with even more implausible statements.

This does not augur well for the remainder of the campaign. It means that Hillary Clinton has what might be termed a “trust death spiral.” She begins by having the public think she is untrustworthy. Then, in response to accusations that she is untrustworthy, she says things that make her sound even more untrustworthy. Because there’s no point at which she’ll simply break free and come clean, things can only ever get worse for Hillary Clinton. If you point out that her positions have changed (making her somewhat untrustworthy), she responds by insisting that they haven’t changed (making her even more untrustworthy). If a report says she is misrepresenting the situation with her email, she will then misrepresent the report itself.

This is a problem not just because it decreases public trust; it also treats voters like they must be incredibly stupid. It’s brazenly insulting to people’s intelligence to simply deny that a report says what it says. And because people are more intelligent than that, they don’t like it when you try to pull tricks like this.

That fatal flaw means that Clinton is in terrible trouble. As this publication has explained in detail before, Clinton suffers from the fact that her weaknesses are those that Donald Trump is well-positioned to exploit. Trump is uniquely strong against Clinton, and Clinton is uniquely weak against Trump. One core problem is that nobody ever seems to go from disliking Clinton to liking her, while plenty of people seem to go from disliking Trump to liking Trump.

Meanwhile, desperate liberals are falling back on some of their worst arguments yet in an attempt to convince people that the obvious is in fact the impossible. New methods of explaining away the facts include: “The election is still many months away, it’s too early to tell anything” (Right, but unless people start liking Hillary Clinton more with each additional disaster, things will only get worse); “Sanders backers will come around and realize Clinton is the better of the two options” (Sure, but how are you going to get them to physically go to the polls to support someone they still can’t stand?); and “Obama’s approval ratings have been going up, which will favor Democrats in the fall” (they are almost certainly going up because everyone despises Clinton and Trump so much that Obama now looks positively spectacular by comparison).

Liberal pundits have also already begun preparing their excuses for a Clinton loss in November. It will all be Bernie’s fault. After all, “if Bernie splinters the left and erodes Clinton’s support among voters, the consequences for our country could be even more dire than another Bush administration.” I am not the first to point out that Democrats seem to have a more developed strategy for blaming Sanders for Clinton’s loss to Trump than they have for actually defeating Trump. Their plan, should they lose, is not to concede that they ran a disastrous candidate from the beginning and ignored all of the warning signs, but to simply spend four years shouting the word “Nader” at every progressive who cares to point out what a blunder Clinton’s nomination was. In this way, just as Democrats after 2000 learned no lessons (perhaps you should have nominated someone who wouldn’t cause people to vote for Nader?), Democrats after 2016 will similarly remain smugly convinced that Clinton was the best choice, no matter how much the vast majority of Americans may disagree.

Watching this mistake play out in slow-motion is painful. As Clinton continues to tank, and continues to delude herself as to why she is tanking, and thereby cause herself to tank further, Sanders supporters will have to watch in exasperation watching their predictions all come true before their eyes. Even the satisfaction of an “I told you so” will be robbed thanks to the liberals’ insistence on calling them Naderites. Meanwhile, a monstrosity named Trump continues his unstoppable ascendance. Of course, there’s a simple way to solve the problem and salvage the party’s chances of winning the election. Yet some Democrats continue to prefer the unrealistic candidate over the pragmatic one, and insist on nominating Clinton.