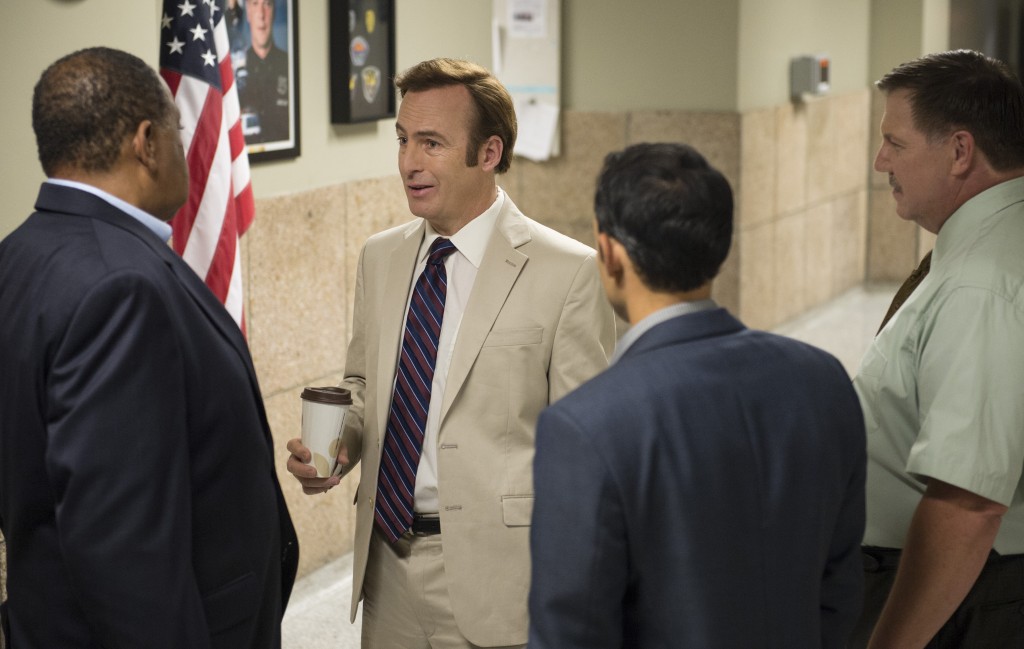 From getting stiffed on the public defender fee to negotiating with the D.A. in the bathroom to wading through mountains of discovery, Better Call Saul is the only law show that tells it like it is.

“You’re the worst lawyer ever!” shouts Jimmy McGill’s client, just outside the emergency room, moaning in pain. Just moments ago Jimmy suggested that, instead of killing Jimmy’s two clients, drug kingpin Tuco settle for merely breaking one leg a piece, a deal to which Tuco vigorously assented. “Hey, i just talked you down from a death sentence,” Jimmy replies. “I’m the best lawyer ever!”

At first blush this seems like another glib response thought up late one night in the writers’ room; but Jimmy isn’t wrong. In fact, for a public defender, a plea deal like that is a serious triumph. Yet every defense lawyer in the world knows this feeling. You negotiate your ass off to make the client slightly less screwed, but the client still ends up getting screwed. The system takes another chunk out of someone’s life, and you’re left grasping the most hollow of victories.

The broken-leg incident is a perfect encapsulation of why Better Call Saul is currently  the best law show on television, perhaps the best ever. At the very least it’s the most realistic. It gets what none of the others do, that law is grubby, full of banality, bureaucracy, and compromise. In a vicious system your ‘victories’ often feel like failures. Being a lawyer doesn’t mean giving thunderous closing arguments in defense of the Constitution, but standing in a courthouse men’s room begging a prosecutor to consider offering probation as he takes a massive shit.

Every episode of Better Call Saul is meticulously faithful to the realities of legal practice. Jimmy operates a one-man legal practice out of the back of a nail salon, and depends on court-appointed public defense cases to pay his bills. BCS recognizes the implications of Jimmy’s status; he can’t do legal research, because the cost of access to case databases far exceeds the budget of a nail-salon shyster. So every time he wants to look up a precedent, Jimmy must beg a friend at a major law firm. He must sound as professional as other lawyers, so he pretends to have a secretary and to meet people outside of his office for their convenience.

“Law is full of people like Jimmy McGill, getting through on false confidence and bluster, constantly having to hustle. It doesn’t consist of giving grandiloquent declarations before the Supreme Court, but spending night after night poring over boxes of documents.”

Little details like these will be highly familiar to lawyers, who are often just as exasperated watching courtroom dramas as doctors are watching House. The everyday legal world is not full of people like Denny Crane, William Shatner’s powerhouse senior partner from Boston Legal. It’s full of people like Jimmy McGill, getting through on false confidence and bluster, constantly having to hustle. It doesn’t consist of giving grandiloquent declarations before the Supreme Court, but spending night after night poring over boxes of documents.

The attention to detail in BCS really is extraordinary. In the show’s first courtroom scene, in which Jimmy gives a doomed argument in defense of some teenagers who have committed an unspeakable act, a television is wheeled before the jury to present video evidence. It takes a small eternity for the bailiff to bring out the television cart, which drags its wire across the carpet. The judge is half asleep and the jury barely paying attention. The moment neatly captures the tedium of courtroom life, the suffocating greyness and plodding tempo in which America’s courtrooms steadily roll out their injustices and absurdities.

The “fake it till you make it” aspect of legal practice is also well-captured. Jimmy’s legal skill is mostly of his brashness. Seeking to represent senior citizens, Jimmy buys a cream-coloured Matlock suit in which to charm old ladies. The gambit works, just as it does in real life. Traditional lawyering is much less about the law than it is about appearance, networking, and bluster.

There are plenty of other reasons to praise Better Call Saul. It’s a spinoff of Breaking Bad but is nothing like it; at least in its first season, it isn’t bloody and dark but rather funny, unassuming, and tender. In the years before he became BB’s flashy sleazeball Saul Goodman, struggling attorney Jimmy McGill is a deeply human and complicated person, likable and difficult. The show takes its time moving things forward, preferring to linger on small things and portray them to perfection.

One could expound endlessly on Better Call Saul’s virtues as a piece of television, and many have already. But the freshness of its take on law is the real diamond in the ruff. It might not even be noticeable until one sets Better Call Saul next to Law & Order. But when one does look at them side by side, it becomes instantly clear what a cheap cop-out Dick Wolfism really is. The excuse given for offering unrealistic melodramas is that they are more watchable. Nobody wants to see a public defender negotiating with the court clerk over his fee, a prosecutor forgetting which defendant he is offering a plea bargain to, or a two-bit lawyer scribbling a motion on toilet paper.

Better Call Saul proves that this is nonsense. It’s not that these things are inherently unwatchable, it’s that making grandiose cartoons takes much less effort. Better Call Saul’s realism allows better character building and  an actual opportunity to critique the legal system as it is, from the way plea deals are struck to the methods big law firms use to drown small time clients and lawyers in fees and paper work. Skillful writing, directing, and acting can make the commonplace engrossing. They can shine a spotlight into the dingiest corners, where most of our lives are lived. True art is about showing us what we are rather than reassuring us that we’re what we’d like to think we are. In depicting law in all its dreariness and grime, Better Call Saul puts itself in the class of television that goes beyond mere entertainment and achieves genuine artistic power.