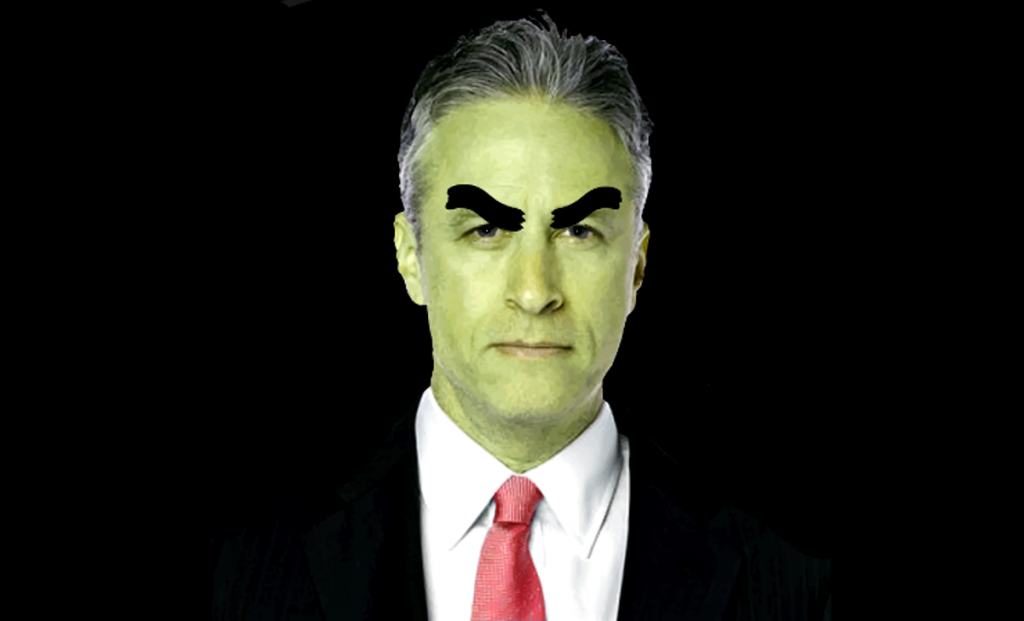 Instead of being venerated as one of television’s great hosts, the cruel, unpleasant Daily Show host should be reviled and forgotten.

To liberals, the voice of Jon Stewart was a presence of comfort and solidarity during the Bush years. As folly piled upon folly, Stewart’s program felt like an outpost of sanity for the left, a last refuge of judgment in a sea of political madness. Stewart’s personality, sarcastic but fueled by a deep moral indignation, felt like the sort of sensibility one could, above all, depend on to be outraged by the right things and compassionate toward the right people. In fact, to watch old Daily Show episodes, one notes the extent to which it is Stewart’s likable, sympathetic voice that creates the show’s watchability, rather than the quality of the writing or production.

So when Stewart signed off the air recently after a decade-and-a-half, he was lavished with gushing tributes and summings-up in the press. He was credited with creating a “cultural phenomenon” and for becoming “one of the nation’s most bracing cultural, political, and media critics.”

But as Stewart’s legacy is sealed, and his lasting impact on politics and comedy assessed, it is important to remember another side of Jon Stewart, a side carefully concealed by his self-effacing on-screen persona. For behind the scenes, Jon Stewart could be a cruel and tyrannical man, who made life a hell for some female and minority writers, and vented his “joyless” anger on anyone who crossed him.

For the entirety of Stewart’s tenure as host, The Daily Show was a well-oiled machine, and Stewart’s warm, humble persona as host a comforting presence to TV viewers. But when those who worked on the show have let their guard down in interviews, it has become clear that the familiar Stewart is far from the Stewart that exists backstage. As one former show executive put it, “there’s a huge discrepancy between the Jon Stewart who goes on TV every night and the Jon Stewart who runs The Daily Show with joyless rage.” Staffers have described him as “anything but warm and fuzzy,” a man whose anger has even exploded into throwing things at people.

Staffers helped conceal Stewart’s true nature from the public. Former correspondent Stacey Grenrok-Woods said that “I would never think of Jon Stewart as nice” but that fans of the show were so eager to think of Stewart as being a decent guy that she always told them “Yes, he’s very nice” whenever they would ask.

Yet the anecdotes about Stewart’s unpleasantness are easy enough to come by. Audience member Allison Kinney wrote for Salon about her bizarre and unsettling experience at a show taping. Stewart always performed a Q&A session with his audience. But when Kinney questioned Stewart over his warm-up act’s use of anti-Semitic and homophobic humor, Stewart blew up at her, swearing at and belittling her in front of the whole crowd. Kinney had expected Stewart to simply promise to look into the issue, but instead he went out of his way to make her feel as if she had ruined the show.

The incident with Kinney fits a pattern of gender problems at the show. Female ex-staffers have reported an exclusionary “boys club” atmosphere at the show, and Stewart allegedly banned his female executive producer from the show’s Emmy acceptance. And while a number of female Daily Show staff have insisted they are well-treated, the show’s record on diversity is undeniably abysmal, with the guests being overwhelmingly male and up to 96% white. All of this is grossly ironic considering Stewart’s constant on-air reaffirmations of his commitment to progressive feminism.

Even Family Guy creator Seth MacFarlane has expressed shock at Stewart’s abrasiveness and hostility. In 2007, when the Writers Guild of America went on strike, Stewart crossed the picket line to continue hosting his show. MacFarlane ribbed Stewart for the act of hypocrisy: Stewart publicly insisted he supported the strike, yet undermined his fellow writers by continuing to work. Stewart became furious with MacFarlane over the criticism, and mercilessly berated him in a profane hour-long phone call. MacFarlane has even said he has tried not to talk about the incident, for fear of being publicly “crucified” by Stewart. Criticize Stewart’s betrayal of the writers and one could expect to become the show’s next target.

But the most telling illustration of Stewart’s underlying nastiness is his deplorable treatment of Wyatt Cenac, which only came to light last month. In 2012, Cenac was serving as the show’s only black writer. When he gently expressed concern to Stewart that Stewart’s Herman Cain impression resembled an inappropriate racial caricature, Stewart became enraged. He repeatedly screamed at Cenac to “fuck off,” and said he was “done with” Cenac, leading Cenac to believe he was fired.

The abuse was so intense that Cenac had an emotional breakdown. Cenac describes how he left the studio and burst into tears, overcome with loneliness. Stewart also continued to perform the impression, in defiance of Cenac’s warning that it bordered on being an offensive Amos n’ Andy routine. Cenac would leave the show a year later, alienated and miserable.

Stewart’s behavior toward Cenac not only reveals him to be a bully, but shows something far darker: Stewart was uninterested in removing bigotry from the show and was intentionally hostile toward his only black writer over race issues. The liberal values Stewart professed night after night were flatly contradicted by his actions backstage, where he harangued minority staffers for daring to suggest he consider the racial implications of his material.

Jon Stewart has spent many years beloved by young progressives, as a voice of moderation in an age of extremes. Former Daily Show contributor Lewis Black recently compared Stewart to Walter Cronkite, and the parallel is true: as a reassuring, authoritative voice of reason on television, Stewart did play the Cronkite role for millions of people. Television is a machine for disguising the truth, however, and “Jon Stewart” was as much of a carefully-constructed fictional character as Stephen Colbert’s exaggerated “Stephen Colbert.” The real Jon Stewart appears as something very different: an often humorless, angry, and egotistical man.

One might consider this immaterial to his legacy; many great performers have hideous personality defects. It becomes important, though, because women and minorities so often bore the brunt of Stewart’s unkindness, whether they were in the audience or the writer’s room. That kind of ugliness makes Stewart a traitor to his professed egalitarian values, and a poor role model for progressives. Stewart was the definition of a hypocrite, a man who convinced the public of his righteousness while treating those around him abysmally.

Now, Stewart is gone, his tenure generally looked back on positively. But it’s worth reflecting on his darker aspects, both for the sake of preserving the truth, and because it’s an illustrative case of just how much our public figures can depart privately from their popular personas. That may seeme elementary and universally-accepted, but while everyone affirms it, in practice they all remain credulous. No matter how many times we see the mask slip, from Christian Bale’s abusive rant toward his subordinatess on the set to (at the extreme end) Bill Cosby’s multi-decade serial rapes, it never quite sinks in that well-known personalities aren’t quite who they appear to be.

The talk show host Dick Cavett once wrote that he found it astonishing how insincere someone could seem when he talked to them in the studio, yet how affable they came across on the screen. Cavett noted that:

“…people who are experienced with the camera, notably actors and politicians, will develop a false geniuneness that is indistinguishable from the real thing. Many is the time I have sat on stage and thought ‘Everybody will see through this guy’s act, then sat at home and found that what I saw while doing the show had gotten lost somewhere between the man and the camera.”

Therefore never trust a voice on television, not even one so apparently sincere as that of the self-deprecating, affable truth-teller Jon Stewart.