Logic and The Left 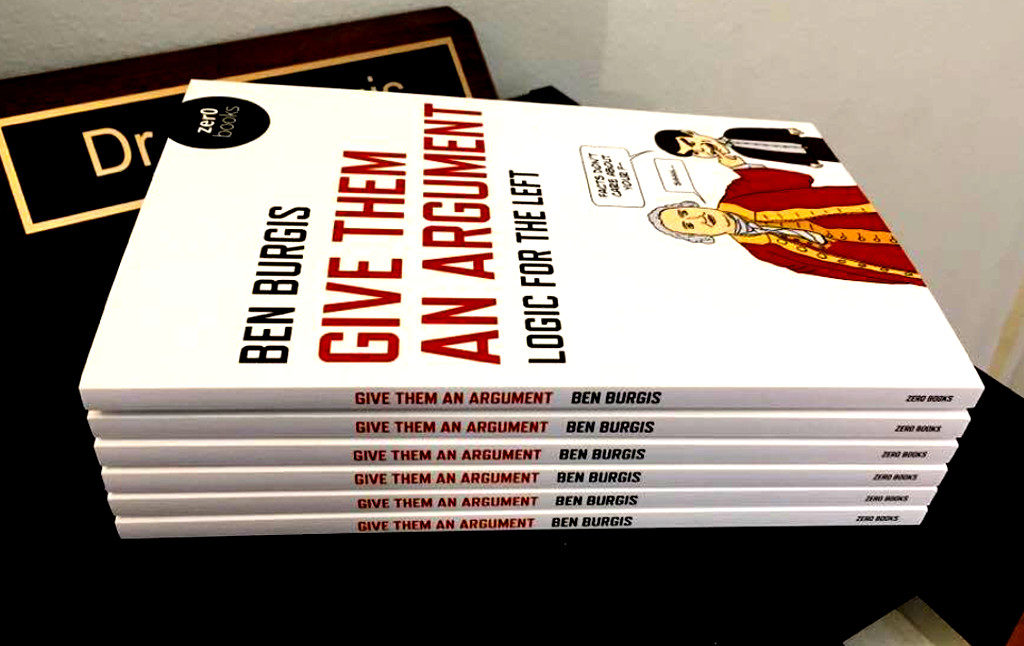 Ben Burgis argues in his new book Give Them an Argument: Logic For The Left that some of his fellow leftists are falling into a trap. Right-wing commentators from Ayn Rand to Ben Shapiro claim to be lovers of “logic” and “reason,” who prefer facts to feelings and cold brutal truths to mushy dreamy utopianism. In response, it may be tempting to say things like “Well, logic isn’t enough without values” or to simply make fun of those who love Logic as emotionless and obnoxious. Burgis recounts a conversation with a fellow leftist who was reluctant to teach a class on logical fallacies, fearing that such classes turn men into insufferable libertarian “logic bros.”

Burgis, a philosophy professor and teacher of logic, does not deny that plenty of the men who most love playing “spot the logical fallacy” are insufferable. He describes a particular type of person:

He or she—let’s be honest, he—is far more likely to talk about logic as a sort of mental weapon he can use to defeat and humiliate “libtards.” Even the words “logic” and “argument” are wielded almost like magical talismans with mysterious powers to reduce opponents to quivering piles of urine and soiled garments. Post a video critical of the alt-right in certain online spaces and you’ll be greeted by a hundred comments smarmily or angrily claiming that the video is “not an argument.”

Burgis does not want us to be this person, nor does he diminish the importance of feelings and values. But he also cautions us against conceding that “logic” is what is being practiced by people like Rand, Shapiro, and every male libertarian on the internet. As a lover of logic, Burgis doesn’t want to cede this territory to the right. This is a “strange and totally unnecessary gift to the other side.” In fact, people like Rand are not coldly rational logic-machines, who simply need to have it supplemented with feelings and empathy. They may lack empathy, but they’re also not practicing anything resembling rationality. Rand’s sophistry horrifies logicians. Rather than granting her the image she sought, Burgis asks “why not demand, as a math teacher might put it, to see Rand’s work?… No, don’t give me stirring rhetoric about Reason. Actually show me some reasoning! Preferably with numbered lists of premises and clearly identified inferential steps.” Expose the pitifully fallacious reasoning clearly for everybody to see.

Burgis goes through some shallow right-wing talking points and shows that, while they can seem like “just basic logic,” they’re often dubious and fall apart under minimal scrutiny. The libertarian “non-aggression principle,” for instance, sounds tempting: Morality requires not initiating force against other people, and a free society is one in which people follow the principle. But when we actually start thinking about what “force” is, and what “freedom” is, we realize that we could create a society that seemed very un-free even without violating the principle. Likewise, when the principle is used to advocate not taking people’s property (as opposed to not doing violence against their person), all kinds of philosophical complications arise. “Property rights,” which sound so natural, are actually riddled with contradictions as a concept.

Burgis is particularly merciless with Ben Shapiro, the cool kids’ philosopher, who has made his love of Reason a core part of his brand. (The book’s cover depicts Shapiro being shushed by the 18th-century philosopher David Hume, whose thoughts on the relationship between logic and passion, fact and feeling, were far more rich and interesting than Shapiro’s shallow sloganeering.) Burgis goes through examples from Shapiro’s How To Debate Leftists and Destroy Them: 11 Rules For Winning The Argument and shows that Shapiro doesn’t care about winning arguments, he cares about winning public debates, which is quite different:

When Ben Shapiro insinuates on Twitter that anyone who supports anti- discrimination ordinances that prevent fundamentalist bakers from refusing to make gay wedding cakes and also approves of restaurants refusing service to Trump Administration officials is being inconsistent and instructs us to “pick one,” he isn’t inviting thoughtful responses. He doesn’t want his Twitter followers to reflect on the reasons why some categories but not others form the basis of “protected classes” for the purposes of anti-discrimination laws and whether those considerations could reasonably be applied to the “class” of government officials with unpopular policies. He just wants the liberals and leftists hate-reading his Twitter feed to feel momentarily confused and defensive and unsure of themselves before he moves on to his next point.

We should not allow ourselves to concede that Shapiro is a thinky-type and we are feely-types. He is neither thinky nor feely. He’s simply a sophist, and Burgis encourages us not to react to sophistry by rejecting philosophy. In fact, logic is a useful weapon. It can help us better understand why we feel what we feel, and resolve inconsistencies in our own instincts. It can help us give better and more persuasive responses to our opponents. It can’t do everything, of course—Burgis points out that everyone is, to some degree or another, basing their political commitments on their feelings, and there’s no such thing as a purely fact-based ideology. “Reason is the slave of the passions,” as Hume put it, and that’s okay. Passions are necessary and good, and we’re never going to escape them. Those who think they’re just “being reasonable” are often simply mistaking their prejudices for scientific truths.

Burgis urges us not to give up on the power of argument. There is a certain strain of left thinking that is dubious about the power of debate and reasoning. That skepticism may be justified, but it’s also the case that people change their minds, and they often change their minds because they’ve heard convincing arguments. (I know this personally, because I frequently get emails from readers who have been persuaded by arguments they’ve read in Current Affairs.) As he writes:

I’ve heard many people who clearly thought they were being insightful saying that no one ever changes their mind because of an argument. This view is as silly and psychologically shallow as the mistake you’d be making by expecting an opponent to change their mind in the room. People do change their minds all the time, and arguments can and do play a role in this process, sometimes because they gradually gnaw at the back of your mind and sometimes because after enough time has passed that your ego isn’t bound up in some previously held position, you just realize to your own surprise that you now accept the contrary position for the very reasons that you dismissed when you first heard them.

Burgis is confident in leftist politics. He believes we have sound arguments and we should make them confidently and clearly. He doesn’t think we have anything to fear from engaging the other side, because the other side’s positions are error-riddled and silly. And he worries that if we don’t work on our arguments, if we aren’t willing to deploy logic rigorously and mercilessly, we’ll end up looking like the very thing the right is trying to paint us as.

Besides, he writes, we are going to need our sharpest logical thinking if we are to successfully pursue a socialist project:

Figuring all of this out means billions of people all around the world who are accustomed to taking orders from bosses and landlords and politicians learning to run their own workplaces and communities. That’s going to be the biggest project of collective self-education in human history. It’s going to have to involve multitudes of people engaging each other to discuss and debate different plans of action, different schemes of social organization, different solutions to a thousand problems that can’t even be predicted from this side of society’s democratic reorganization. To have any hope of this gigantic collective debate being more than what William James called a “blooming buzzing confusion,” a big part of this project is going to have to involve all these people learning to carefully and precisely reason with each other about their common tasks. This means, among other things, learning exactly where and how reasoning can go wrong so that we can learn together to do better.

The message of Give Them An Argument is that logic cannot be left to the “bros.” Libertarian “logic”-lovers have gaping holes in their arguments, which we should understand and reveal. Rigorous, evidence-based thinking is an essential tool in the service of left politics. We can win the argument, because we are right, with both the facts and the feelings on our side.