Tammy Baldwin is Great, Just Not for Cows 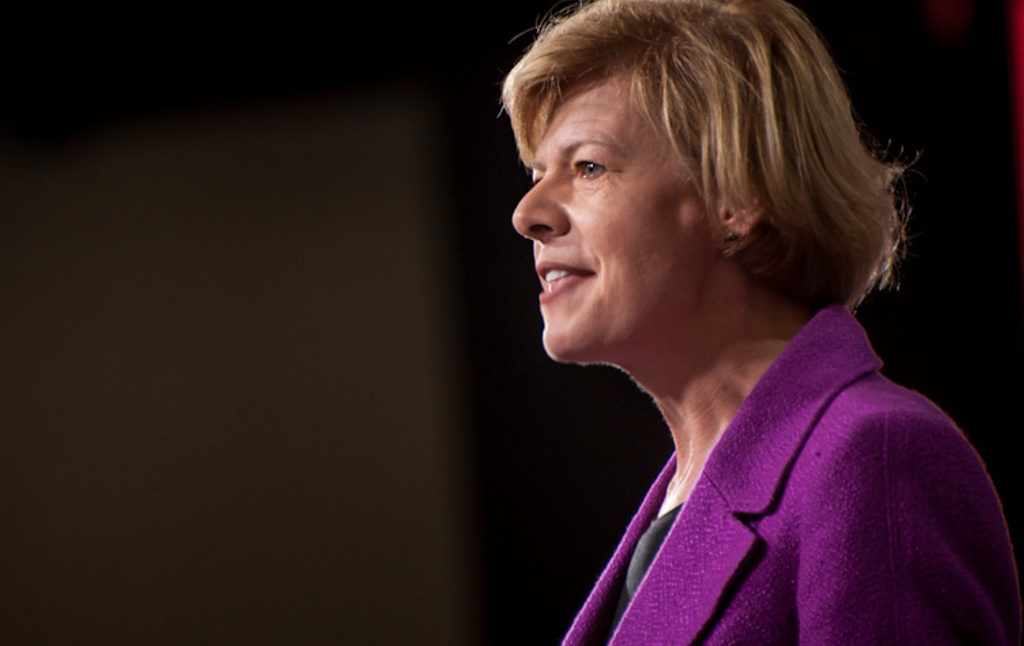 The senator’s “DAIRY PRIDE Act” is a corrupt handout to corporations, an affront to free speech, and an assault on animal welfare…

The first real shots of the 2020 Democratic primary came recently, after some leftist commentators pointed out that Beto O’Rourke is maybe not very progressive. The centrist Dem think tank crowd took offense, claiming that Bernie Sanders supporters were coordinating vicious attacks on Beto. (They were not coordinating, and the vicious attacks consisted of crazy things like examining his political affiliations and voting record, which is obviously a thing we should do.) But while this dumb fight is lingering, some of the “maybe we should look at politicians’ records” crowd has recently put out a new (still uncoordinated) idea: Maybe Tammy Baldwin should run for president.

As far as casual tweets/backroom plots go, this is pretty good! Tammy Baldwin has been among the left-most members of Congress since the 1990s. She was part of the House Progressive Caucus for years. Income inequality is one of her major points of emphasis. She opposed the Iraq War in 2002, and co-sponsored impeachment resolutions against Dick Cheney. The Democratic Party can—and very well might—do much worse than Tammy Baldwin.

That said, there is at least one issue that might cause concern about Baldwin: her authorship of the DAIRY PRIDE Act. The DAIRY PRIDE Act is one of the more Orwellian pieces of legislation to receive serious consideration in the 115th Congress. Yes, it’s an acronym. It stands for “Defending Against Imitations and Replacements of Yogurt, Milk, and Cheese To Promote Regular Intake of Dairy Everyday Act”

Long name, but the legislation is simple. The market for plant-based dairy products, e.g. soy milk, almond milk, oat milk, vegan cheese, etc., has been growing. Per the logic of the DAIRY PRIDE Act, this is “misleading” to hard-working, everyday consumers, helpless against the machinations of Big Veganism. According mostly to the dairy industry, these consumers are being misled by the name “soy milk” into thinking they are getting cow milk with some soy flavor added in.

The solution? Force all products that are not literally made from “the lacteal secretion, practically free from colostrum, obtained by the complete milking of one or more hooved [sic] mammals” to stop using names that include “cheese,” “milk,” or “yogurt.”

On its own terms, the bill is laughable. The problem it seeks to address does not exist. Most consumers, when surveyed, understand that plant-based milks do not contain dairy. And the cry of unfair competition is a joke coming from an industry that earns nearly 3/4 of its money from subsidies. The U.S. dairy industry is so divorced from basic market pressures that the country currently has a 1.4-billion-pound surplus of cheese. (By way of explanation: Excess milk is stored as cheese. And after funding the creation of this ungodly cheese surplus, the Department of Agriculture will often step in to cover the cost of this dairy all over again by purchasing millions of dollars worth of the surplus cheese, essentially as corporate charity.)

The DAIRY PRIDE Act is not an incidental part of Baldwin’s legislative record. Although the bill had a number of bipartisan co-sponsors—including, curiously, Elizabeth Warren—it is very much her legislation. She introduced the bill. Her office organized statements of support from not just Wisconsin dairy farmers, but also dairy industry coalitions from around the country. In March 2017, Baldwin reveled in a rare opportunity to soak in liberal tears, proclaiming her support for the DAIRY PRIDE Act with “no apologies” as she faced questions from activists with the animal rights group Direct Action Everywhere.

The DAIRY PRIDE Act is concerning on multiple levels. It’s alarming to see a progressive quickly embrace the fiction of the small, family-run business in order to do the bidding of some of the country’s most powerful and subsidized financial interests. Even more so when that bidding involves siding against consumers and activists in order to embrace policies that are more comfortably associated with Republican super-majorities (North Carolina and Missouri are two states that have recently passed similar laws targeting the labeling of vegan foods) and the Trump administration (Trump’s FDA is currently accepting comments on plant milk labelling).

Beyond the double-speak, however, there are first order concerns with an otherwise progressive politician hugging the dairy industry tight. A common principle that binds the hodgepodge of identity groups and interests that form the American political left is empathy. The dairy industry represents the opposite of empathy.

People know milk comes from cows, and that’s generally where their knowledge ends. They often don’t know that dairy cows are typically stuck indoors for their whole lives—often on concrete floors, or standing in their own feces. Many dairy cows lack space to do anything other than stand up or lie down.

In order to continuously produce milk for industrial farms, dairy cows have to be regularly artificially inseminated. Newborn calves are torn from their mothers almost immediately after birth. This causes both calves and their mothers extreme distress. Cows bond with their calves. Without human intervention, a calf will nurse from his or her mother for a year, and mother and calf will share a lifelong relationship. On dairy “farms,” mother cows are frequently observed calling in distress for days after their calves are taken away.

After separation from their calves, the cows are hooked up once again to milking machines. Cows are drugged in order to produce unnatural quantities of milk. (American dairy farms still use drugs that have been banned in Europe and Canada.) The cows will be milked multiple times a day. Every few months they will be inseminated again, and milked until they are once again ready to give birth. This is a cow’s life until their body literally breaks down from constant milking and malnutrition. While the natural lifespan of a cow is about 20 years, a dairy cow will only live for four or five years.

The dairy industry is inextricably linked with the most notorious practices of the beef and veal industries. Male calves torn from their mothers are often used for veal. Calves raised for veal are housed in tiny crates designed to prevent them from engaging in any physical activity, and are purposefully fed inadequate diets intended to cause anemia and keep flesh pale. Other male calves are sold to the beef industry. Spent dairy cows will also be used for low-grade beef or pet food.

For some, it will be tempting to dismiss the suffering caused by the dairy and meat industries as a niche concern, or as negligible compared to the amount of preventable human suffering. This widespread belief is both a failure of empathy and questionable math. Cows are sensitive creatures capable of feeling physical and emotional pain. On a given day, there are more than 9 million dairy cows in the country. Almost all of them live in the torturous conditions imposed by the national dairy industry.  There are approximately half a million to a million calves used for veal production in the country each year. In total, it is estimated that the beef and dairy industries kill 39 million cows and calves each year. By any objective measure—even one that heavily discounts animal suffering as compared to human suffering—the corporate dairy industry causes an extreme amount of preventable horror.

It hardly feels like too much to ask that a progressive not go out of her way to support this suffering, especially at the behest of massive corporate interests and without any benefit to anyone else. The bill seems to be nothing more than the dairy industry attempting to increase costs for its competitors. Nevertheless, here we are.

Should this prevent anyone from supporting a Baldwin candidacy—or, if and when the time comes, voting for Baldwin? That’s hard to say. Baldwin is hardly alone among prominent progressives, or even potential 2020 candidates, in turning a blind eye to animal suffering and consumer welfare. As noted, Elizabeth Warren cosponsored the DAIRY PRIDE Act. Kirsten Gillibrand, despite re-branding herself with calls to abolish ICE, is a leading congressional advocate of ensuring the dairy industry never faces anything resembling a free-market. Among potential 2020 candidates, only Cory Booker is a vegan, and there are a number of reasons why a progressive might favor Baldwin over Booker.

At the very least, though, if Baldwin wants to speak for a national progressive constituency, she should have a better explanation as to why she unapologetically supports such an unjustified corporate hand-out, and why her empathy short-circuits when it conflicts with the interests of a home-state industry. All candidates should have to answer for the suffering they compromise with, even if for Baldwin it’s cows and (for a refreshing change) not endless war.