This Burrito Includes an Arbitration Clause 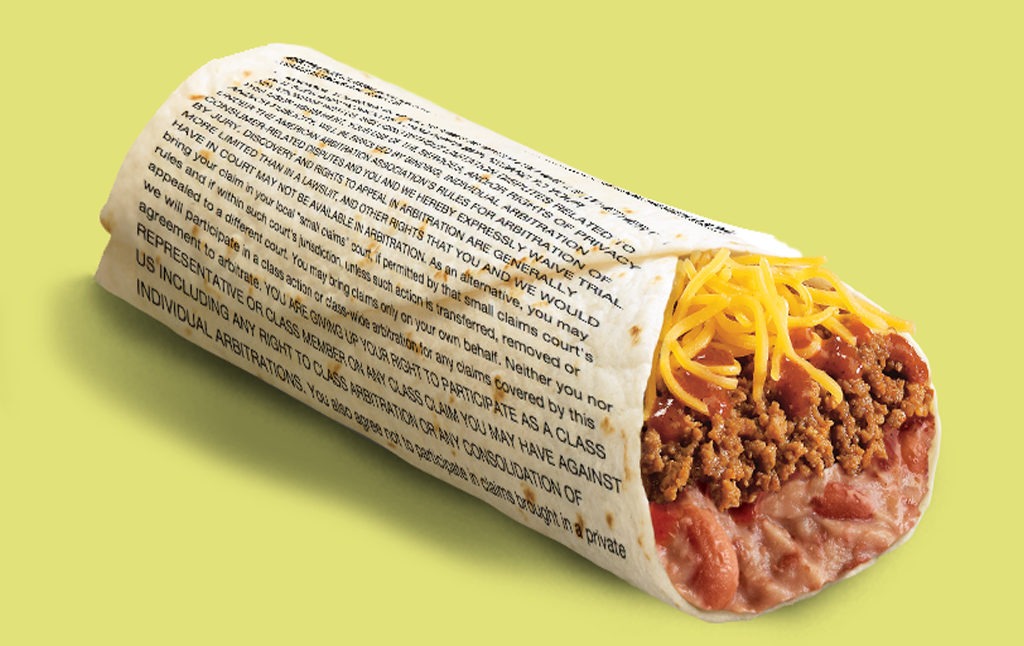 Corporations are steadily taking away your right to sue over wrongdoing…

Back in May, the Supreme Court issued its decision in Epic Systems Corp. v. Lewis. The nation’s highest court decided that employers could force their employees to sign arbitration clauses at threat of their jobs, and that those arbitration clauses then prevented employees from suing collectively when their employers stole their wages or harassed or abused them. That case included gas station workers who were required to drive around town and monitor competitors’ prices but weren’t paid for doing so. The Supreme Court decided that the gas station could force those employees into individual, secret arbitration proceedings to fight for their back pay, despite all of the employees having the exact same grievance based on the same obviously illegal policy.

Oren Nimni and I were unhappy about this. We explained how important it is for employees to be able to band together and take action together, especially where their individual claims for stolen wages might be only a few hundred dollars—a consequential amount for a low-wage worker but not enough on its own to hire a lawyer. We also worried about how litigating employment claims like wage theft and harassment in secret arbitration proceedings would force every single person to prove things all over again even though their colleagues might have proved the very same claims over and over again already. Arbitration gave employers what amounts to a free pass to continue illegal practices, because very few people can afford to do anything about it and even when they can, and even when they win, no one will know.

We also noted just how valuable arbitration is to companies. You can tell by how much money they have spent to protect it, including a TV campaign attacking the CFPB when arbitration regulations were in the pipeline. (Congress killed the regulations.) We worried that arbitration agreements were going to get much more common and that, especially without strong labor protections for collective bargaining on the front end, employees would keep losing power to enforce their rights.

Not to say we told you so, but enter Chipotle. Back in 2013, Chipotle employees began to sue for wage theft. The employees claimed that the company had policies that made them start work before clocking in, and made them clock out before finishing work. Essentially they were required to work without pay. They brought a class action eventually consisting of approximately 10,000 employees.

Did Chipotle respond by changing its policies and paying the employees what they were owed? Of course not. Instead, in 2014, it stuck an arbitration clause in its employment contract for all new employees and kept doing the same thing. Then it asked the court to dismiss from the case all the workers who were required to sign the arbitration agreements. And, because of the Supreme Court’s decision in Epic Systems, the district court in the Chipotle case dismissed more than 2,800 Chipotle workers from the suit. If those people want the money they earned, each one of them has to take Chipotle to secret arbitration.

And of course, even if they manage to find an attorney who will represent them there and dedicate the months or years of their time and energy to pursuing each of their cases individually, they might not win! Because often arbitrators aren’t required to follow established law or court precedent! So even if a federal court decides that Chipotle stole wages from its employees, thousands of those employees might still not be able to get their money, all because of an arbitration clause.

I find this infuriating. And it’s everywhere. Oren and I included a joke letter with a bunch of funny fake businesses that might have arbitration clauses. But that letter wasn’t too far from reality. I have had to sign arbitration clauses to put my dog in daycare and to take martial arts classes. Also to use websites, have a cell phone, go to the dentist, and have a credit card. In one sense it’s a mundane issue, one hard to get people to care about. But I want people to worry about where and how they can sue in the relatively unlikely event someone rips them off.

After all, companies rip us off all the time! I can’t even count all of the class action settlement checks I’ve gotten in the mail for products or services I’ve used, from Apple computers to a program I was required to use to take the California Bar Exam on my computer. And that’s just a small sample of the money I should be getting back. One thing you learn as an attorney who works on consumer finance is that few small-dollar illegal financial practices ever get righted. Mostly companies nickel and dime people without consequence because the individual amounts are small and it takes a lot of time and resources to figure out what happened and why it was illegitimate. (Not to mention this is often done through what some have called “bullshit financial products” like overdraft fees, which make banks literally billions of dollars every year.)

I don’t really have a good answer to the problem of arbitration clauses. Oren and I suggested using Yelp reviews to shame businesses that use arbitration clauses. Personally I won’t be going to Chipotle (but I didn’t often go before). But the truth is that we are all going to keep signing these clauses because we need jobs and cell phones and bank accounts. And until the Supreme Court decides to overturn its insane arbitration decisions (ha) or Congress does something to stop businesses from taking advantage of people (HA!), there is probably little we can do. At least let’s notice arbitration clauses, understand why they’re important, and be really mad.