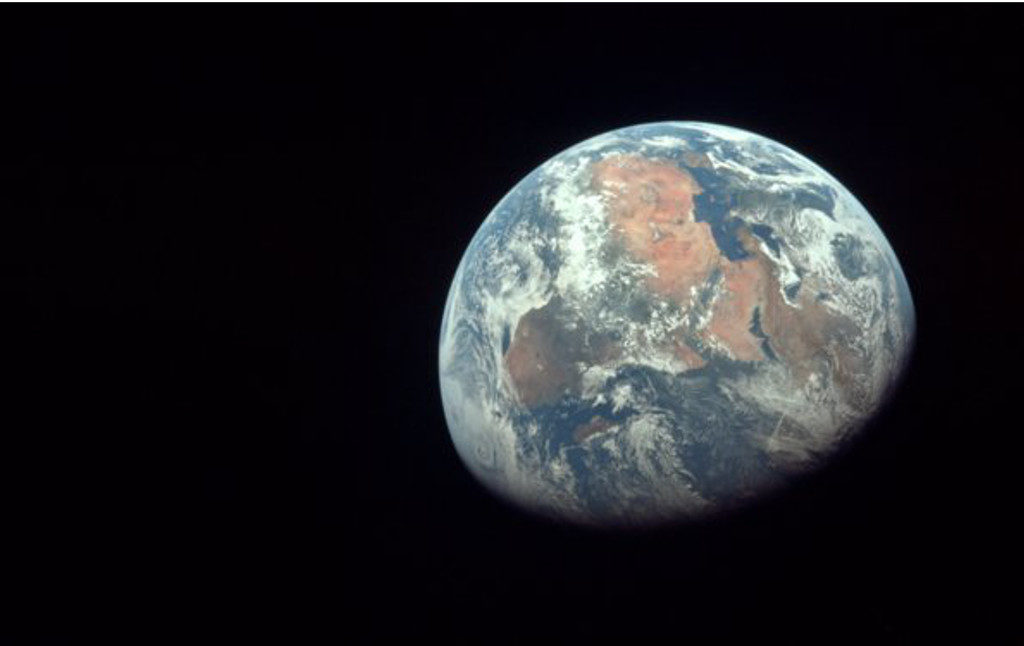 In the beginning there was… well, I don’t know what there was. But then there was a tremendous explosion. Then, for a few hundred million years, there was nothing of much interest. After that, stars and galaxies began to form, and they were fascinating and beautiful, but nobody was there to notice. Billions and billions of years went by, until a molecular cloud happened to collapse, inadvertently giving us the Sun, moon, asteroids, etc. Our humble planet Earth formed by accident, and for billions more years it was wet and gassy, with little to recommend it save some bacteria here and there. Then plants emerged, then all of a sudden there were animals—weird ones—and they lived and they died and they evolved steadily into dinosaurs, who met an unfortunate fate, then very recently we showed up, looking something of a mess, and our ancestors struggled to stay alive, and they fashioned tools and they built little dwellings and they made do and then died, and then the next batch did the same, and they learned to farm, and they learned to build, and slowly something quite impressive emerged. (They were also often killed or enslaved, or did the killing and enslaving.) They built civilizations and they discovered math and they gave birth to Socrates and then they murdered Socrates for asking too many questions. And they fumbled along and tried to figure things out, and they mostly failed, but they learned how to fill their bellies and minds, and they discovered their incredible potential, building printing presses and cotton gins and hundred-story buildings and gigantic ships that sometimes sank. Together, based on what those before them had learned, they invented steam trains and then pickup trucks and then jet airplanes and then television game shows and then internet pornography and then six different kinds of poop emoji pool floats. And all through the process people fell in love, and were torn apart, and worked their asses off, and watched their children screw up or do well, and went on adventures, and played with Legos, and built too many cars and clogged the roads but refused to carpool so they got stuck in traffic and it served them right, and did monstrously cruel things, and tamed a lot of diseases, and ate a lot of tacos, and petted a lot of animals, and treated the planet in highly irresponsible and ungrateful ways, and just generally acted out a stunningly violent, heartwarming, infuriating, inspiring collective drama on an inconceivable scale.

And what I refuse to believe is that all of this was just the buildup to Donald Trump being given the power to end all human life, neoliberal capitalism devouring the earth, Elon Musk buying all of outer space, and everyone eventually ending up working as a drone in an Amazon warehouse until the planet boils or eventually the sun explodes. That cannot possibly be the end of history. Surely not. No. That isn’t how this story goes. That would be a tale told by an idiot, signifying fuck all. I would want my money back. Zero stars. Liked the plot but that ending was garbage.

Yet this is the direction a lot of people seem to believe we’re heading in, and I don’t think they’re wrong. I mean the first thing already happened: The United States gave the world’s most selfish and ignorant man control of its 4,018 nuclear weapons. He’s joked about making himself president for life. Monopolistic corporations are steadily wrapping their tentacles around every part of the economy. There should be hardly any doubt that the U.S. in particular is one major terrorist event away from a frightening concentration of power in the hands of a single unstable person, if you’re not already frightened by the whole nuclear weapons thing.

This makes a lot of people I know feel hopeless and uncertain. They see people with no qualifications except wealth being put in charge, and see Jeff Bezos building a 42 million dollar clock in the desert while his workers pee in bottles because they can’t take bathroom breaks. They see their fate in the hands of grotesque individuals who could not care less about anyone but themselves, and many ask themselves the question that Navy veteran Seth King asked himself when he found himself in the “revolving door of bodies” known as the Amazon fulfillment warehouse: “If this is the best life is going to get why am I even still here?” Every year, in the United States alone, 40,000 people take their own lives because they cannot find a satisfactory answer to that question.

From one perspective it’s strange that that should be the case, because we’ve come so far and done so much as a species, and as George Orwell put it, the Earth is a raft sailing through space, fully stocked with enough provisions for everyone. And yet, history is a record of brutality on an unthinkable scale. Chattel slavery was ended only just recently, and the century that brought us Motown records and the Golden Gate Bridge was, for hundreds of millions of people, also a machine of death creating pile upon pile of corpses. For a few decades, it’s been comparatively peaceful, but only because the world’s great powers keep civilization-ending missiles pointed at each other, and one false move could destroy everything. Oh, and let’s not even talk about climate catastrophe. (Living in New Orleans, I cannot bear to contemplate it.)

How can anyone have hope when Donald Trump is the president? How can anyone have dreams about the Star Trek future, in which we all go on adventures through space together in a spirit of equality and shared purpose? The resurgence of “nationalism” spells absolute doom; nationalism is one of the silliest and most destructive imaginable ideas. Silly because nobody, looking at human beings in the context of the Universe, can think national distinctions are worth worrying about. (Even Reagan admitted that existing global conflicts would seem trivial if the aliens showed up.) “Most destructive” because nationalism operates like a purpose-built empathy inhibitor, making other humans seem less and less like ourselves and thus making it easy to distrust, detest, or destroy them. Nationalism makes it possible to put on a uniform, strut around, and denounce the enemies who will destroy our culture and way of life, without realizing how ridiculous you look to the Universe.

Perhaps you’re an optimist, like Steven Pinker, who thinks everything is getting better and people just don’t know it. Well, you know who doesn’t think that? Jeff Bezos, who has admitted that one reason he wants to invest in space travel is because it will be necessary to flee the Earth. Many of the richest people in the world are scared to death of the near future. They think everything is going to collapse, and are worried that when that happens, all of the people who work for them will turn on them, realizing that without an economy capitalists have no function at all. Our speculative fiction has turned dystopian, and even the Star Trek franchise seems to have given up on the possibility of a just and livable tomorrow.

And yet: It’s just too ridiculous to me to think that there’s no way to avoid a dystopia. I’m not an optimist, because I can’t predict the future. And I’ve come to dislike the word “hope,” which has come to feel cheap and empty. But I’m with Albert Camus: I think the right reaction to an absurd condition is to revolt against it, even if it feels fruitless. That’s not hope, exactly. More like obstinancy, an unwillingness to concede the obvious. Otherwise, what would this great cosmic journey have been for? Would it all have been leading up to self-immolation and the triumph of greed. History cannot be over; nobody should be willing to let it end like that.