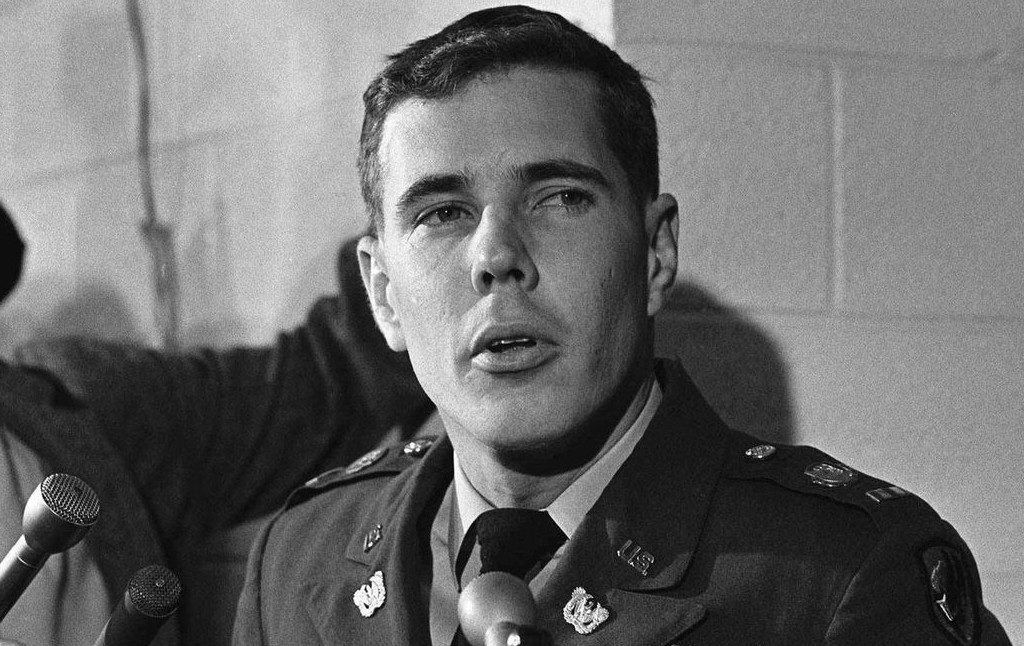 Sometimes, nothing is more difficult than disobedience. The infamous Milgram experiment showed that, however much we might like to think ourselves incapable of doing something atrocious just to avoid making waves, most people are very reluctant to challenge authority. It’s no mystery why ordinary Germans could help carry out a Holocaust. As Milgram himself put it, “even when the destructive consequences of their work become patently clear, and they are asked to carry out actions incompatible with fundamental standards of morality, relatively few people have the resources necessary to resist authority.”

March 1968’s My Lai massacre has become the most infamous event in the history of the Vietnam War. Over a period of hours, American soldiers systematically raped and murdered hundreds of unarmed villagers. After an initial cover-up, 26 soldiers were charged with offenses related to the massacre. Only one, Lt. William Calley, was convicted. Calley served three years under house arrest, but even that was considered so harsh that it created a public outcry. There were pro-Calley sympathy marches across the country, and the White House was flooded with calls for his release. A song called “The Battle Hymn of Lt. Calley,” honoring the man who had ordered the execution of dozens of Vietnamese children, sold a million copies. Most Americans saw Calley not as a mass murderer but as a brave soldier doing his duty.

Calley became a household name after the massacre, during the debate over his trial and sentence. Less-well known was another man present in My Lai on the day of the massacre: Hugh Thompson, a helicopter pilot who intervened to prevent Calley’s men from killing more civilians. Thompson had been flying over the village when he noticed the large number of civilian casualties, and realized something was wrong. Thompson landed near an irrigation ditch, into which soldiers had herded women and children to be shot. Realizing the kind of atrocity that was unfolding, Thompson angrily confronted Calley:

CALLEY: This is my business.

THOMPSON: What is this? Who are these people?

THOMPSON: But, these are human beings, unarmed civilians, sir.

CALLEY: Look Thompson, this is my show. I’m in charge here. It ain’t your concern.

CALLEY: You better get back in that chopper and mind your own business.

THOMPSON: You ain’t heard the last of this!

Getting back in his helicopter, Thompson saw a group of Vietnamese civilians fleeing from approaching US soldiers. Landing the helicopter between the soldiers and the villagers, Thompson threatened to open fire on the soldiers if they attempted to harm the civilians. After a tense confrontation, the soldiers backed down, and the massacre finally ended. Thompson evacuated the surviving Vietnamese to nearby hospitals.

A few observations should be made about Thompson’s behavior. He did not accept “just following orders” as a justification, even though the job of a soldier is to carry out orders. Thompson was not acting on any “authority,” and could not actually command the killers to stand down. Stopping the massacre required him to take the side of the “enemy,” by pointing a weapon at his fellow members of the US armed forces on behalf of the innocent My Lai victims. He had to be prepared to kill other Americans in order to save Vietnamese lives.

It is difficult, from 50 years’ remove, to appreciate how much courage and integrity something like this takes. Americans in Vietnam were trained not to view the Vietnamese as people. They never even referred to them as “Vietnamese,” instead using racist slang like “gooks” and “dinks.” There was a culture of disregard for the lives of villagers, who were all viewed as potential collaborators with the Viet Cong. Resisting this indoctrination, and retaining one’s full humanity, was extremely challenging. But Thompson did not just refuse to take part in the dehumanization process. He was even willing to threaten other troops with force, and thereby risk being branded a traitor and enemy sympathizer.

Indeed, that is exactly what happened after the massacre was exposed. The public rallied around Calley, the murderer, rather than Thompson, the decent man. Thompson was bombarded with death threats and accused of disloyalty for threatening other Americans and for testifying against them. He was treated as having done the wrong thing rather than the right one, because he disobeyed and acted on his own initiative.

This is an important part of the story, and tells us a lot about what courage is. Obviously, many soldiers are courageous, in that they risk their lives out of perceived obligation to their countries. But it takes a special kind of courage to risk your life to defy your country. That’s because of what Milgram showed: if all of the social incentives are toward compliance, the most difficult thing is to be the one who refuses to comply. Incidentally, this explains why many draft resisters have said that it was a harder decision to “dodge” the draft than to comply with it: by avoiding serving in a war they found unjust, they risked incurring the disapproval of their families and communities, and being branded cowards the rest of their lives. It is hard to do something dangerous, but it is even harder when people whose respect you value will see you as a bad person. The most courageous acts are not necessarily the ones that result in acclaim, but can be the ones that bring derision and hatred.

Of course, the story of the Vietnam War should not be about Hugh Thompson. The main focus should be on the between 1.3 million and 4 million Vietnamese people who died as a result of that war. Americans often tell the story of the war as the story of our involvement in the war: the soldiers, from the good Thompsons to the bad Calleys, and the anti-war movement, and the Nixon administration. But the devastation inflicted on the Vietnamese dwarfed that which Americans faced, something that we still fail to fully appreciate. As John Tirman documents in The Deaths of Others, America often measures the consequences of war by deaths and injuries to US soldiers, casually failing to account for the immeasurably greater harm inflicted on the countries in which we wage war. Even a simple Google search can show the subtle ways in which the lives of Vietnamese people are treated as negligible: 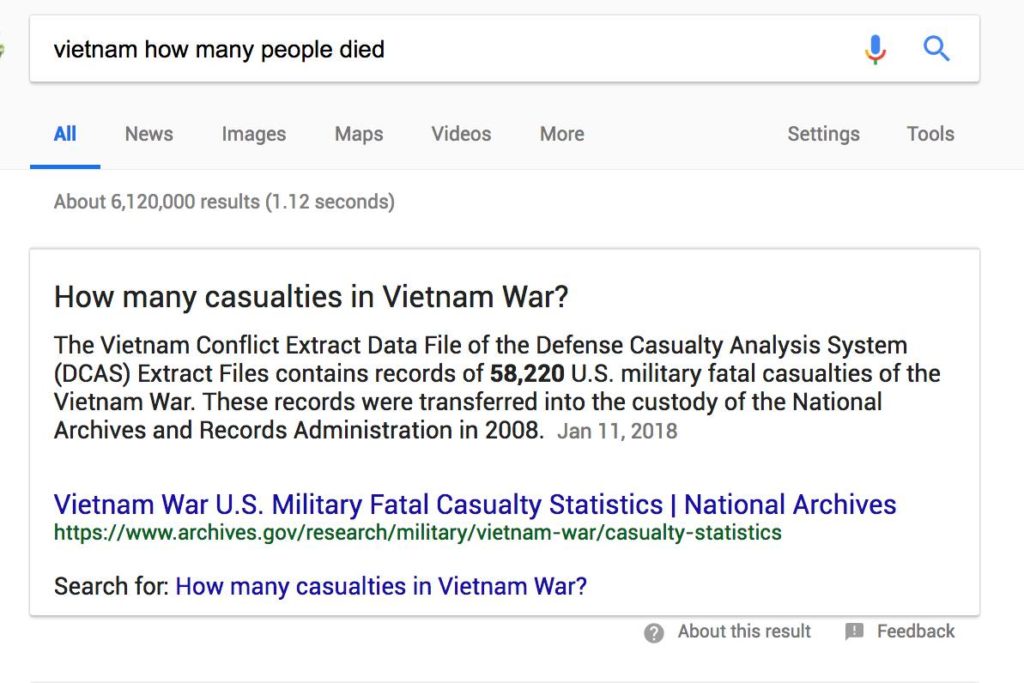 My Lai itself can be a somewhat misleading incident to single out. While it is rightly infamous, dwelling on it risks confirming it as an “aberration” in an otherwise humanely-prosecuted war. But the killing of Vietnamese civilians was routine and widespread, as Nick Turse shows in Kill Anything That Moves. Furthermore, it was our indiscriminate bombing that produced the most innocent deaths. The US dropped more than 3.5 times as many tons of bombs on Vietnam than it dropped during the entirety of World War II. Many of these did not explode, and continued to victimize people for decades afterwards. Between 1975 and 2007, 105,000 Vietnamese people were killed or maimed by explosives that had been leftover since the war, and which left “15% of the total surface area of the country contaminated by unexploded ordnance.” The hundreds of deaths at My Lai were an atrocity, but more importantly, American military action in Vietnam was itself an atrocity, one that continued to take lives long after US forces departed.

Nevertheless, the story of Hugh Thompson’s individual actions is worth retelling, because it offers a lesson about how a moral human being should respond when their countrymen are engaged in something abhorrent. One of the most important, and least discussed, findings from the Milgram experiment is that while most people do comply with unjust commands, they are far less likely to do so if even one other person speaks out against the injustice. People were willing to inflict painful electric shocks on others because the experimenter told them to do so, but if they observed someone else refusing, they themselves would often refuse as well. “All progress depends on the unreasonable man,” as George Bernard Shaw said, because being reasonable means adapting to the world’s standards while being unreasonable means changing the world to fit your own standards. Horrors can only be prevented if there are people around who are brave enough to risk being called unreasonable or traitorous.

I keep a portrait of Hugh Thompson on the wall in my apartment, along what I call the Hallway of Admirable Persons. (Other framed pictures are: Nawal el Saadawi, Malcolm X, the Mothers of the Plaza de Mayo, Doc Pomus, Silas Soule & The Immortal Ten, Bree Newsome, Big Jay McNeely, and a French WWII resistance fighter smiling as he faces the firing squad.) I’d like to think that in the same situation, I would have the courage to do what he did. I am not sure that I would; few people do. But 50 years after My Lai, everyone should reflect on what it takes to ensure that atrocities like that, and like the entire Vietnam episode, never take place again.