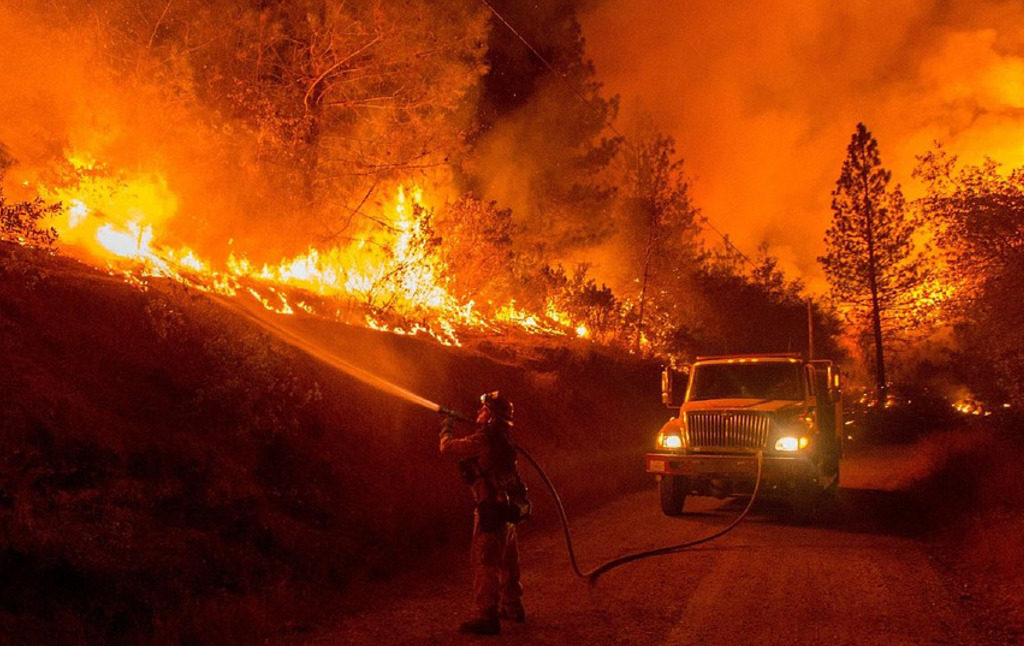 Private fire services and the economics of burning to death…

Private fire services disturb the hell out of me. That’s because, more than just about anything else, they seem to hint at what a neo-feudalist dystopia might look like. The wealthy can buy firefighters and have their homes saved, while those who can’t afford to be saved will have to watch as all of their possessions are incinerated. There will be two types of people in this world: those who can pay their way to safety, and those who will burn. In the fully-privatized world, the amount of money you have determines literally everything, and the privatization of basic services like firefighting seems to draw us worryingly close to that world.

During the recent California wildfires, according to The Wall Street Journal, some people received a little more fire protection than others. Insurers sent in private firefighting forces to protect valuable homes, “sending out fire crews to clear brush, put down fire retardant around residents homes, set up sprinklers and then document the process via photos that are then sent to the homeowner.” Only those homes that had signed up for special policies would be coated in fire retardant.

The use of private firefighters for the wealthy has apparently grown over the past decade. A 2007 report documented AIG’s use of a “Wildfire Protection Unit” to serve its Private Client Group, a plan “offered only to homeowners in California’s most affluent ZIP Codes — including Malibu, Beverly Hills, Newport Beach and Menlo Park.” Just look at this extraordinary photo of AIG-branded firefighters. A homeowner recalled what it was like to know he was privately protected:

“Here you are in that raging wildfire. Smoke everywhere. Flames everywhere. Plumes of smoke coming up over the hills. Here’s a couple guys showing up in what looks like a firetruck who are experts trained in fighting wildfire and they’re there specifically to protect your home. … It was really, really comforting.”

Less comforting, perhaps, to the neighbors who also see a team of firefighters coming over the hills before realizing that they are only authorized to put out AIG-insured homes. In fact, not even just AIG-insured homes: special elite AIG-insured homes. Though in one case, the company was willing to benevolently extend protection to AIG customers with ordinary plans: “AIG said it did apply fire retardant to some homes of standard policyholders if they happened to be nearby, because it made financial sense.” If saving your home doesn’t “make financial sense,” though, you’re screwed.

The economics of the whole arrangement make perfect sense. An insurance company really does not want to see a multi-million dollar house burn to the ground, so of course it will be eager to provide extra fire services if doing so will substantially affect the amount of the subsequent claim. And it’s clear why a wealthy person would want this kind of coverage: as the homeowner above says, it’s really comforting to know that a corporation is sending you personal firefighters who will look out for you and you alone. Private firefighting is just like private security, or the mercenary soldiers that rich people hired in post-Katrina New Orleans to protect their properties from looting.

But though these deals make perfect sense to the parties making them, they have alarming implications. There’s something outrageous about a world in which firefighters protect some people rather than others, and choose to let houses burn to the ground that could be saved. I am still haunted by the 2010 story of a local fire department who refused to put out a house fire because the owner hadn’t paid his $75 annual fire protection fee. Emergency services seem like one area in which there ought to be a consensus that money shouldn’t play a role. Obviously, that’s far from true, as anyone who has gotten stuck with a $1000 bill for an ambulance ride knows well. But the more emergency response becomes a transaction, rather than an equal and universal guarantee, the more literally true it is that some people’s lives are worth more than others.

I am terrified of the future, and it’s partly because I don’t really see a way to stop these trends from getting worse. Public services will be under-resourced and wealthy people will have a strong interest in contracting for private services instead. This is already the situation in medical care, it’s already the situation with police and the military, why shouldn’t it be the same with fire? In every other domain of life, how much money you have determines what you will get in return, this just extends market logic to yet one more domain.

If we are not careful, this is what the dystopia will look like. Poor people around the world will burn to death in slums while a tiny group of rich people are insulated from all social problems and buy their way out of any trouble. Even if there is widespread climate catastrophe, those with nine houses can just hop from one to another as they successively tumble into the sea. In fact, the world we’re in already resembles the dystopia, the only major difference being one of scale. If wealth continues to be concentrated in a smaller and smaller group, and the vast majority of people are more and more excluded from power and left to fend for themselves, the word “feudalism” will seem less and less extreme as a descriptor.

It’s tragic that there even is such a thing as the “economics of burning to death.” But there is. And the more private fire services there are, the more your chances of having a house tomorrow will depend on whether you’ve paid off the right corporate protection racket.