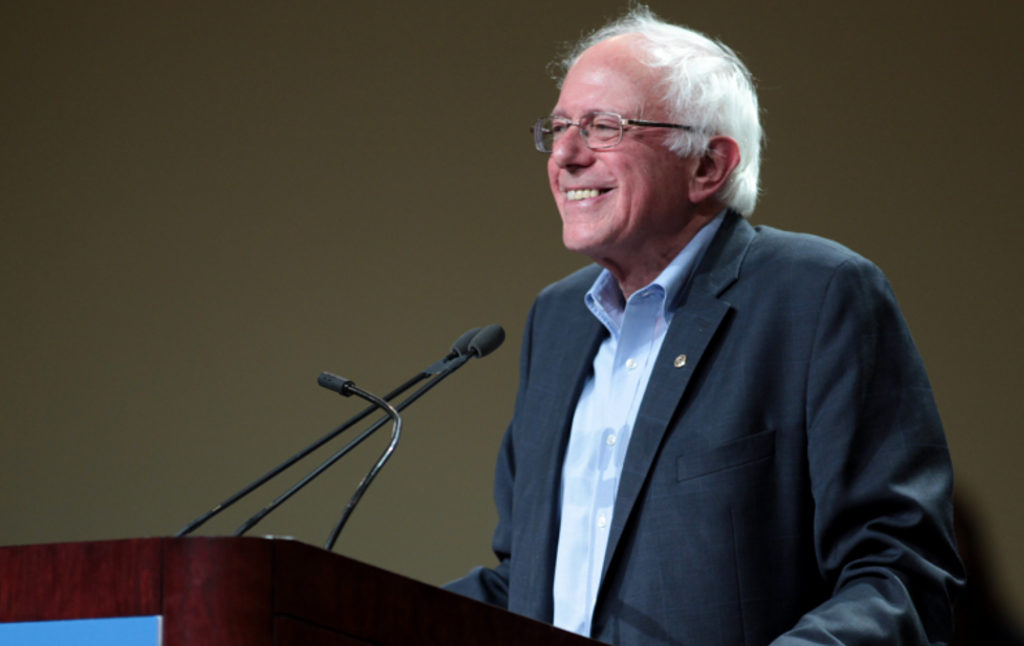 In one of his greatest songs, Stevie Wonder croons: “So make sure when you say you’re in it but not of it, you’re not helping to make this earth a place sometimes called Hell.” It’s a warning tailor-made for Bernie Sanders.

As a political independent who has been acting as the Democratic Party’s outreach chair since last November, Sanders is arguably “in it” but not “of” it. He’s been specifically tasked with “enlist[ing the] help [of Democratic leaders] in the development of the Senate Democratic agenda.” But he has always made clear he’s no Democrat, which has earned him persistent criticism from journalists, pundits, and politicians alike.

Perhaps most prominently, Hillary Clinton blames Sanders’s party non-affiliation for what she felt was Sanders’s inadequate commitment to supporting her presidential campaign. After all, she wrote in her recently-released memoir, “he isn’t a Democrat.” Democratic political strategist and executive director of the Ready for Hillary super PAC Adam Parkhomenko tweeted earlier this year that “Bernie ran as a Democrat. So if he wants to be on the front lines of shaping the Dem Party, he should join it.” Peter Daou, founder of “Hillary Men” and polarizing pro-Clinton media site “Verrit” has said that the influence of “Non-Democrat Bernie Sanders” is “#destructive.”  The latest to join the fray is Michael Star Hopkins: writer, pundit, and ironically, self-described “Rockefeller Republican,” who, in an article titled “Bernie is not even a Democrat, so why is he ripping our party apart?”, argues that Sanders’s outsider “attacks” are destructive to the future of the Democratic Party.

In the hands of mainstream Democrats, the fact that Sanders is not a Democrat is wielded as an accusation. “I’m proud to be a Democrat,” writes Clinton in her memoirs. “And I wish Bernie were too.” Strangely, liberals who usually see unflinching commitments to patriotism as cultish and unsophisticated—the same people who were quick to defend Michelle Obama for acknowledging that it is not always easy to be proud of America—are unable bring the same nuance to the issue of party loyalty. For many, until he puts a “D” after his name, Sanders will remain an enemy.

It’s hard to support the idea that Sanders hasn’t worked hard to advance the party. Sanders’s efforts in service of Clinton’s campaign match or exceed the efforts of prior primary losers. Sanders readily acknowledged that “the election of Donald Trump as president would be a disaster for this country,” and committed to doing “everything that [he could] to see that that doesn’t happen. When I campaign,” he promised, “I campaign very, very hard.” As described by Amy Davidson Sorkin in an article published shortly before election day, he did, traveling across the country to give speech after speech imploring his supporters to vote for Clinton:

Since conceding defeat in the primaries, Sanders has been one of the real champions of this campaign.  He let his supporters yell at him and deride him as a sellout in bleak delegate breakfasts at the Democratic National Convention, in Philadelphia, as he endorsed Clinton and explained why they needed to do the same. He made getting support for her his priority, putting aside any subtle, undermining gestures that might have better preserved his rebel-rock-star status.

But more relevant than whether Sanders has done enough to support the party itself should be whether Sanders has worked hard in service of the party’s ideals. After all, what would it mean to promote a party that stood for nothing? A label alone means very little. Political parties are not identities in and of themselves. Rather, they ostensibly represent a relatively defined set of principles. That set may only partially map on to an individual’s moral, political, and cultural values, but a politician’s failure to fully subscribe to a party’s doctrine does not necessarily imply complete rejection of it—just look at Sanders’ long-time caucus relationship with the Democrats. Perhaps because we live in a largely binary political system, Sanders’s status as an Independent challenges the settled assumption that you’re either with us, or against us. But that framework has always been ludicrous: it was just as irrational when George W. Bush infamously gave voice to it in his effort to cast those countries that opposed his wars as supporters of terrorism.

Yet for some, party still seems to precede principle. Consider Senator Barbara Boxer’s rejoinder to Sanders’s claim that Clinton is only sometimes progressive: “Hillary is progressive EVERY day. Bernie is a Democrat ‘some days.’” The implication is that party affiliation is equivalent to political identity. That’s not the case, though: progressivism is defined by a commitment to a set of beliefs, while “being a Democrat” is defined by membership in an organization, one that may or may not represent that set of beliefs.

And when it comes to advancing progressive values, it’s hard to think of anyone who has done more than Sanders. In the year following the election, he has chaired the Democratic Party’s Outreach Committee, embarked on a nine-state unity tour, held numerous town halls, defended the ACA against Ted Cruz during a live CNN debate (with another Sanders/Cruz debate to come soon), advocated for Democratic candidates in local elections, and, most recently, challenged Senators Lindsay Graham and Bill Cassidy to a debate on the merits of their bill to repeal and replace Obamacare—a bill which has since failed. Compare these contributions to those of, say, Hillary Clinton, who has only recently emerged to promote her own (score-settling) book. (Lost in the recent tiff over whether Sanders should be speaking at the Women’s Convention was the fact that Sanders actually accepted the invitation while Clinton decided she couldn’t fit it into her schedule amid all the book signings.)

If the Democrats were able to affirmatively define what they did stand for, Sanders might not appear to be such a threat. Unfortunately, summarizing their own principles is where Democrats struggle. Identity-based slogans like “I’m With Her,” and “Stronger Together” failed to galvanize the Democratic base in the last election, and core Democratic interests, such as labor, have been alienated since the 1990s when the New Democrats dismissed them in favor of banking interests and the technocracy. By contrast, Bernie easily makes the case for his brand of democratic socialism: it’s an embodiment of the very “progressive” values that Barbara Boxer insists she, Hillary Clinton, and the rest of the Democratic Party support. It’s about guaranteeing people the basics in life: healthcare, education, well-compensated work, and making sure a tiny cabal of rich people doesn’t control the lives of everyone else. Unless the Democratic Party doesn’tstand for those things, it’s hard to see what they could possibly object to about Sanders’ agenda.

In a climate in which trust of government is near record lows, Sanders’s status as a relative outsider is an asset. In 2016, status-quo insiders like Clinton, Cruz, and Bush lost to “outsider” Trump, while Sanders rose from relative obscurity to wrest 44% of the primary vote from one of the most recognizable politicians in America.  Polls reflect that many Americans are willing to play Russian Roulette with the office of the presidency if it means even a chance at something better. In this political context, the Democratic status-quo brand is a net negative. That Sanders is “not a Democrat” is part of his appeal. As they say on the internet: it’s a feature, not a bug. Even if Democrats were experts on Democratic voters (and their recent electoral record suggests otherwise), the majority of voters identify as Independents, not Democrats.  The votes of registered Democrats alone are not enough to secure an election, and any successful appeal needs to target demographics beyond those who identify strongly with the party as an institution.

In his recent article, Michael Star Hopkins warns against 2020 becoming a battle between the establishment and Sanders “because that’s exactly what Trump wants.” But his assessment is off: what Donald Trump wants is a war between himself (a putative outsider) and the establishment. And, unfortunately, that’s exactly the battle centrists like Hopkins are neatly queuing up. For example, although the Sanders left has warned against promoting candidates with close ties to Wall Street, Hopkins puts the word “corporatists” and the phrase “owned by Wall Street” in quotation marks, as though corruption is a fictive or irrelevant consideration at the polling booth. (In fact, 54% of voters in 2016 considered HRC to be “corrupt.”) Regardless of whether accusations of corruption are true, dismissing and trivializing them will come at Democrats’ own peril.  Hopkins acknowledges that there is widespread public distaste for corporate donations, but he absolves the Democratic Party of responsibility for accepting them, arguing that corporate donations are just “the political reality we live in.” But Sanders’s campaign raised 70% of its funds through donations smaller than $200 (compared to Hillary’s 17%). The whole point is to change the political reality, not to just shrug and say “Everybody grifts.” That uninspiring defense of the status quo didn’t work in 2016, and it won’t work in 2020.

The implication that non-Democrats would fail to live up to Democratic values, when those values are precisely the ones the Sanders movement aims to push forward, is partially why the “not even a Democrat” smear is so grating to progressives. That the party is moving leftward should provoke warm-hearted optimism and encouragement from Democrats; after all, those are ostensibly their values, too. Instead, the petty and territorial response from some Democrats reminds one of the line from Mean Girls: Bernie Sanders “doesn’t even go here!”

Political parties aren’t sports teams. Politics are about principles and results, not tribalism.  As Marc Munroe Dion, quoted in Thomas Frank’s Listen Liberal, put it when describing the despair that had settled on a dying manufacturing town, those still invested in party affiliation itself are performing “political rituals that haven’t made sense since the 1980s, feathered tribesmen dancing around a god carved out of a tree trunk.” Affiliation is not a birthright or an immutable characteristic, but an expression of personal ideals. If Bernie Sanders, the most popular politician in America, is not a Democrat, it is the Democrats, not Bernie, who need to consider redefining themselves.

Read more of Briahna Gray’s work in our new print issue and in our paperback essay collection The Current Affairs Mindset: 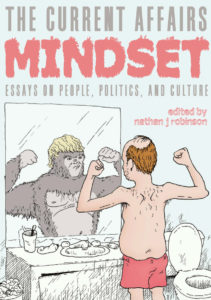