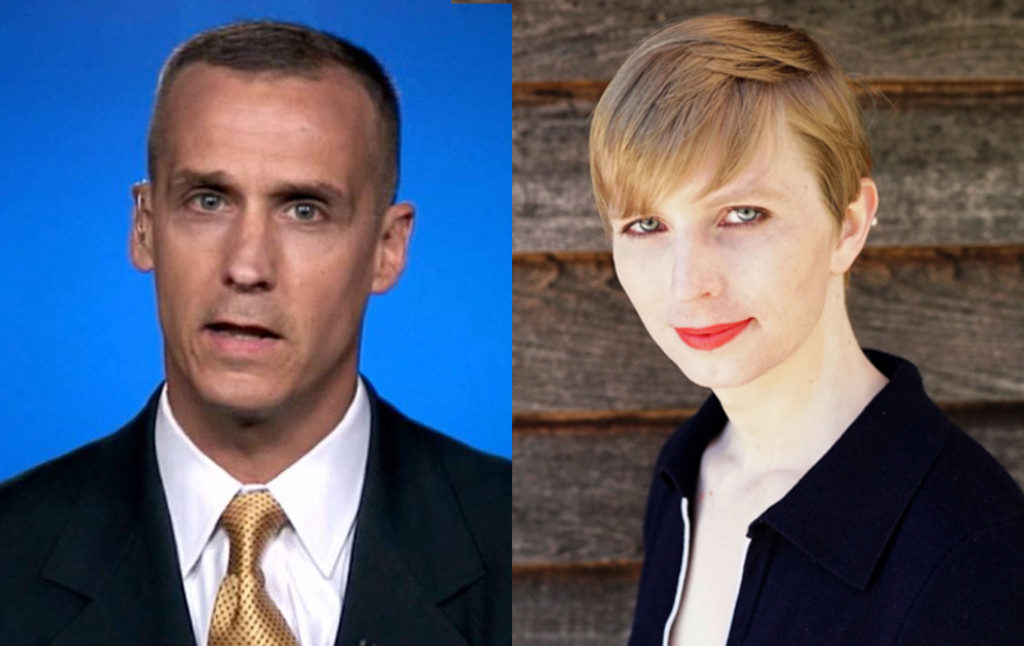 The new Visiting Fellows at Harvard’s Kennedy School are a distinguished bunch.

Corey Lewandowski is best known as the former Trump campaign manager who assaulted and bruised a female reporter at an event, before becoming becoming an ethically compromised CNN commentator, then an unregistered lobbyist and influence peddler selling access to the president. Lewandowski also attained recognition for grabbing a protester by the collar at another Trump event, as well as threatening to make his neighbor’s life “a nightmare” and menacing her with a baseball bat after the neighbor wouldn’t let Lewandowski use her land to build his six-car garage. (Lewandowski was also, of course, responsible for the Trump campaign itself, which was, uh, not exactly the most elevated contribution to our political culture.)

Other luminaries among the Harvard fellows include: Jason Chaffetz, the former congressman known for fueling anti-vaccination conspiracies and being a key player in the ludicrously over-the-top House Benghazi investigations; Sean Spicer, the much-mocked Trump press secretary who spent an undistinguished few months as America’s own Baghdad Bob, willingly spreading brazen lies on behalf of the president and accidentally suggesting that even Hitler had some moral scruples; Robby Mook, the hapless former Clinton campaign manager who drove a seemingly-unbeatable candidate straight into a ravine; Mary Katharine Ham, an editor for the Breitbart-esque conservative opinion sites Hot Air and Townhall; and Mika Brzezinski/Joe Scarborough, the morning show hosts known for flattering and then feuding with Donald Trump. It was, in other words, an impressive cross-section of the most empty-headed and amoral people in American political life.

Fortunately, there was one genuine American hero in the group: Chelsea Manning, the former U.S. Army intelligence analyst who sacrificed her job and freedom in order to reveal vital information about abuses of power by governments worldwide. Manning was sentenced to 35 years in prison, and repeatedly endured the torture of solitary confinement, leading to multiple suicide attempts (which, perversely, were punished with more solitary confinement). After public outcry over the injustice of Manning’s sentence, President Obama commuted it shortly before leaving office.

Manning is often simply described as a “leaker,” with little attention paid to the actual substance of what she disclosed. So it’s worth a reminder of why her action was heroic: As Glenn Greenwald summarizes, the war logs Manning leaked revealed a “multitude of previously secret crimes and acts of deceit and corruption.” They showed how “top American leaders lied, knowingly, to the American public, to American troops, and to the world.” They showed that there had been 15,000 previously unreported civilian deaths in Iraq that the United States government had failed to disclose to the public. They showed that the United States armed forces had killed “almost 700 civilians, including pregnant women and the mentally ill,” for coming too close to military checkpoints. They showed that the U.S. knew about but refused to investigate abuses of prisoners committed by Iraqi security forces, which “included beatings, burning, electrocution and rape.” They revealed a covered-up 2007 incident in Afghanistan in which U.S. soldiers “fired their guns indiscriminately, killing 19 unarmed civilians and wounding 50 more.”A video showed U.S. helicopter pilots laughing as they gun down civilians. (“Hahaha I hit ’em,” “Oh yeah, look at those dead bastards.”) And there was plenty more.

This information would never have reached the public were it not for Manning’s actions. When Manning saw the files, she knew what the consequences of leaking them would be, but she did it anyway out of a sense of moral duty. And we should all be glad she did. While some have tried to allege that direct harm was caused by her disclosures, there has never been any evidence produced to show that this is the case (though even evidence of harms would need to be weighed against the vital necessity of the disclosures).

But one should always be suspicious whenever an institution like Harvard appears to be doing something just, decent, and mildly courageous. Today, the university rescinded its offer of a fellowship to Chelsea Manning. It did so after receiving complaints from current and former CIA officials over the award. Trump’s CIA director Mike Pompeo, who had previously called Edward Snowden a “traitor” who should be put to death, canceled a talk at Harvard. Former deputy CIA director Michael Morell, known for both encouraging the covert killing of Iranians and his “staunch defense” of “brutal interrogations of al Qaida prisoners and targeted killing with drones,” also criticized Harvard and resigned his position there. Under pressure, Harvard told Manning she was no longer welcome.

Harvard’s statement on its reasoning is amusing. Kennedy School Dean Doug Elmendorf said that a “Visiting Fellowship” was not actually intended as any sort of honor, but that he now realizes people see it that way:

We did not intend to honor her in any way or to endorse any of her words or deeds, as we do not honor or endorse any Fellow. However, I now think that designating Chelsea Manning as a Visiting Fellow was a mistake, for which I accept responsibility… I see more clearly now that many people view a Visiting Fellow title as an honorific, so we should weigh that consideration when offering invitations. In particular, I think we should weigh, for each potential visitor, what members of the Kennedy School community could learn from that person’s visit against the extent to which that person’s conduct fulfills the values of public service to which we aspire. This decision now is not intended as a compromise between competing interest groups but as the correct way for the Kennedy School to emphasize its longstanding approach to visiting speakers while recognizing that the title of Visiting Fellow implies a certain recognition.

It is, of course, dishonest in the extreme for the Dean to pretend that he never knew the title “Visiting Fellow” implied any kind of honor. I don’t know any fellowship in the world that isn’t considered to be some kind of recognition of the person. But what’s interesting about the statement is that the Dean provides no reasons whatsoever for thinking that Chelsea Manning’s “conduct” does not “fulfill the values of public service to which we aspire.” In fact, for any person whose values aren’t warped by a slobbering deference to power, Manning exemplifies exactly the values toward which we should aspire.

The other important fact about the Dean’s statement is this: now that he has decided that evaluating whether someone gets a Visiting Fellowship should involve whether Harvard believes their conduct fulfills the values of public service, Harvard has now affirmed that Corey Lewandowski and Sean Spicer, the professional lobbyist and the professional liar, have not exhibited conduct incompatible with the values of public service. Lewandowski, who assaulted a woman and threatened another with a baseball bat, has been given “a certain recognition,” while Manning, who exposed U.S. atrocities and was tortured to the point of attempting suicide, has had that recognition revoked.

It is the second time in under a week that Harvard has been met with controversy for revoking an offer. Several days ago, the New York Times reported that the university had overturned a decision to admit Michelle Jones, a distinguished scholar incarcerated in an Indiana prison, to its PhD program in American Studies. Jones, who had served 20 years for murder, had her application flagged and denied despite admittedly being qualified for the program. As one of the professors who flagged Jones’s application said:

We didn’t have some preconceived idea about crucifying Michelle… But frankly, we knew that anyone could just punch her crime into Google, and Fox News would probably say that P.C. liberal Harvard gave 200 grand of funding to a child murderer, who also happened to be a minority. I mean, c’mon… One of our considerations was if this candidate is admitted to Harvard, where everyone is an elite among elites, that adjustment could be too much.

We should note here that a Harvard professor who caused Jones to be denied admission has openly stated that the fact she was a “minority” factored into the decision to deny her admission, along with vague language about how her “adjustment” to being among “elites” might be too much. It would have been one thing if the university had simply denied Jones because of the nature of her crime (and one could debate the justice of such a decision), but the professor is emphasizing that other factors were important, like the effect that Jones’s race would have had on the university’s public relations.

Institutions like Harvard are often called “liberal,” and they are. But one interesting thing about liberal institutions that are uncomfortable about their liberalism is that they often compensate in strange ways, whether it’s the Berkeley chancellor insisting that Milo Yiannopoulos and Steve Bannon speak on campus, or the New York Times hiring Bret Stephens while excluding leftists and members of racial minority groups from the ranks of its op-ed columnists. Harvard seems to believe that the interest of fairness requires finding the most loathsome right-wing caricatures and feting them with fellowships. That fairness is an illusion, however. If you are Michelle Jones, and are responsible for the death of one person (a crime for which you have served a lengthy sentence), you are toxic. If you are Henry Kissinger, and responsible for the death of many, many more, you are welcome. If you’re a high-ranking CIA official who defends U.S. atrocities, you can stay as long as you like at the Kennedy School. If you’re the brave soldier who exposes those atrocities, you don’t uphold the requisite standards of conduct. There is no “balance” or consistent standard here, merely a desire to maintain respectability and make sure FOX News and the CIA don’t get too upset.

I would imagine hardly anyone is shocked to discover that Harvard University, of all places, doesn’t uphold a consistent set of moral principles. This may be the least newsworthy story of the decade. But the Manning/Lewandowski contrast is illuminating, and it is worth remembering that when elite institutions speak of “values,” the values in question are warped and hypocritical.