The Sanders/Cruz Debate Was The Best Political TV in Ages 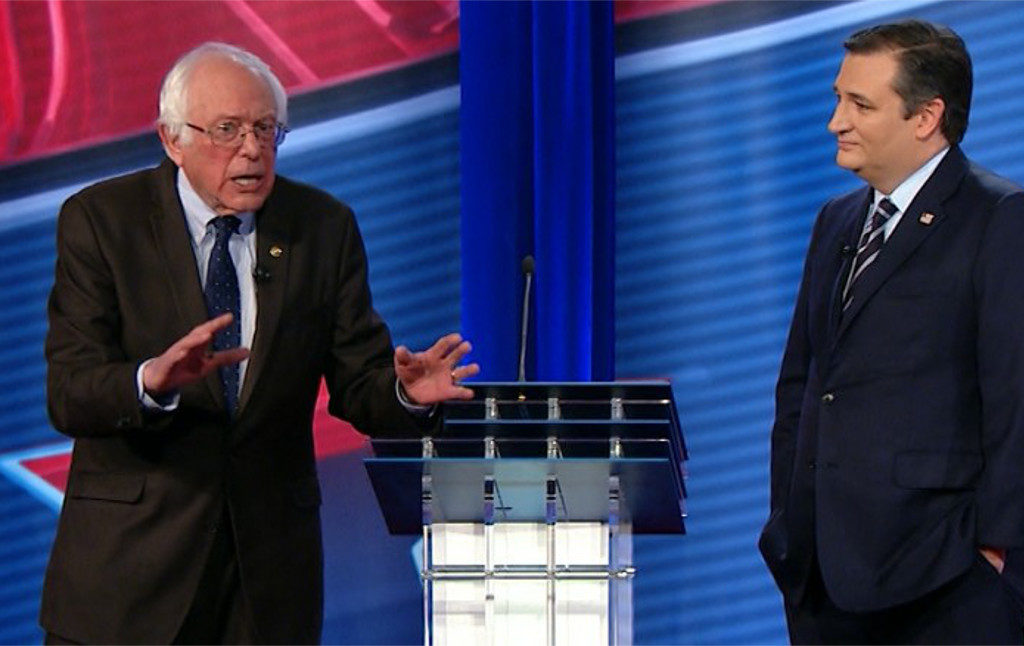 My God, that was fun. And enlightening. And thorough. How on earth was it on CNN?

Last night CNN hosted the most improbable of televised spectacles: a 2-hour debate on healthcare policy between Ted Cruz and Bernie Sanders. Ostensibly, it was to be a debate about ObamaCare, but since neither Cruz nor Sanders likes Obamacare much, it ended up being a debate over whether to fix Obamacare through a single-payer system or by letting the market decide. It was therefore essentially a contentious two-hour tussle over the relative merits of socialism versus capitalism.

Both Cruz and Sanders were in excellent form. Cruz is a slick debater and came armed with a bevy of statistics about the horrors of Canadian healthcare, as well as a map showing how ObamaCare had hurt Trump voters. Sanders did what he does best: making an emotionally compelling case for the need to take care of one another, and challenging the callous moral underpinnings of Republican pro-market orthodoxy.

Over the course of two hours, Sanders and Cruz gave their spiels on various aspects of the healthcare system, including drug pricing and importation, the coverage of pre-existing conditions, Medicare and Medicaid, women’s health, and cost control. They answered thoughtful questions from audience members who had suffered in various ways from America’s disastrous overpriced healthcare system. (Cruz was confronted by a woman with multiple sclerosis who had had to leave Texas because it had declined to expand Medicaid, while Sanders had to explain to the owner of a hair salon chain why she should feel a responsibility to pay for her employees’ health insurance.)

Sanders’s best moments came when he challenged Cruz on Cruz’s lawyerly evasions. When Cruz was asked whether, under his plan, insurers could deny people with pre-existing conditions, Cruz replied that nobody would lose their health insurance. Sanders pointed out that people with health insurance not losing it did not mean that people without it could get it. Similarly, when Cruz insisted that he would preserve the right to “access” good health care, Sanders replied that “access” meant very little without the ability to actually afford it:

Cruz, too, successfully hammered Bernie on the cost of his single-payer plan, and slickly re-characterized all of Sanders’s proposals as pro-government and anti-choice. (He also gave a closing statement that bizarrely referenced the “More Cowbell” sketch from Saturday Night Live to make the case against single payer, telling the audience that Sanders was just trying to give them more cowbell. As I say, bizarre.)

Naturally, I am biased in attempting to assess the victor of the debate, considering my previously expressed opinions on the subject of Ted Cruz. But I had been worried that Bernie would struggle against Cruz, given Cruz’s reputation as a formidable debater (Bernie was sometimes ropey during the primary debates, and missed numerous opportunities to land important points). But Sanders did exceptionally well, getting the case for universal healthcare across with impressive clarity and force.

Because of that, I remain more convinced than ever that Sanders would have absolutely crushed Donald Trump had he been the Democratic nominee. That’s because Sanders is very effective at disowning bad Democratic policies while embracing good ones. Unlike Clinton, he doesn’t try to defend the least defensible actions of the Obama administration. He doesn’t insist the Affordable Care Act is great, he insists it’s somewhat better than what came before. When Cruz pointed out that Democrats were bought by Big Pharma just as much as Republicans, Sanders didn’t try to dispute it; he agreed. Sanders’s status as an independent willing to criticize his party means he doesn’t end up having to make dishonest and partisan arguments in order to exonerate the actions of his team.

But the most important takeaway from last night’s debate wasn’t that Bernie would have won (though he would have). Instead, the most extraordinary thing about the debate was just how good it was. It was two hours of actual policy substance in which the disagreements between two sides were laid out clearly and thoughtfully, with each side challenging the other’s assumptions and having to demonstrate a serious knowledge of the issue. Because it was on a single subject, it didn’t have the cursory, talking-point oriented feel of the presidential primary debates, which sometimes had to cover about ten issues in 90 minutes. The moderators carefully kept the senators from straying away from the subject of healthcare, and that level of focus and depth made it the single most substantive policy discussion on television in recent memory.

For a couple of hours last night on CNN, then, the viewing public saw a vision of what political media could be like, if media companies were serious about trying to get people informed, and staying away from sensationalism. This was no talking-head jabber-fest, it was an authentic discussion in which disagreements were carefully but contentiously explored. It was an incredibly refreshing change from the usual barrage of Trump-oriented, substance-free hysteria. (Indeed, one of the most impressive aspects of the debate was that the name “Donald Trump” was spoken only about twice.)

CNN has been notoriously dreadful for a long time. They helped build Donald Trump’s candidacy by broadcasting full-length live feeds of his rallies, and their closest thing to a substantive and hard-hitting commentator is Anthony Bourdain. But if the Sanders/Cruz debate is indicative of a new long-term strategy, there may be some minuscule sliver of hope for American political media. This is what we need more of. Real debates that neither descend into pointless bickering nor avoid serious disagreements like the divide between socialism and capitalism.

Hosting political debates on CNN won’t fix American politics. But it will sure make political television a lot more bearable. More of this, please. More of this all the time.