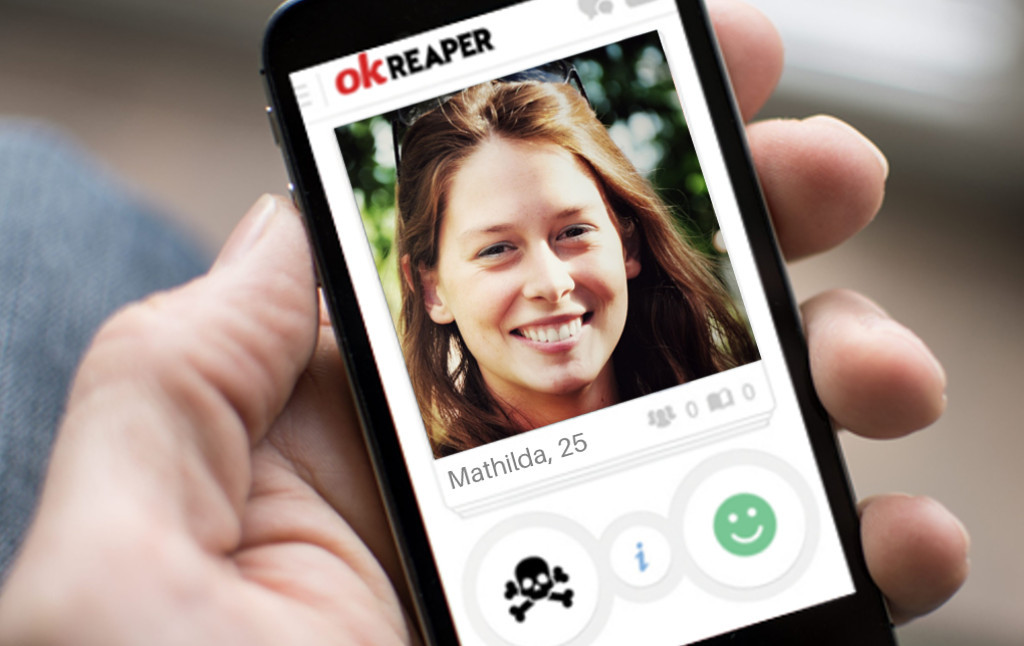 There’s no principled distinction between a gun and a magic death-button.

Opponents of gun rights frequently make unpersuasive arguments. They focus on the intent of the Second Amendment or the unique horror of “assault” weapons. They overstate the extent to which federal gun control measures can be effective, and understate the extent to which they can result in draconian policing practices that disproportionately harm racial minorities. They get mired in pointless speculative arguments over what the Founding Founders would have wanted.

In so doing, they end up losing sight of the fundamental issue regarding guns. They forget to demand that gun rights supporters answer an important foundational question, which can be summarized as follows:

Is there a principled difference between having a gun and just having a button that when pressed kills the person standing in front of you?

Let’s imagine a new app. It operates very simply. It shows you pictures of the people standing within a 50-foot vicinity of you. As each one is displayed, you must decide whether the person should live or die. Swipe left to let live, swipe right to strike dead. The moment you swipe, the person is instantly sapped of life.

The concept of the death-app is disturbing. In fact, it’s a dystopian horror. If people could simply kill whomever they pleased from their smartphones at any moment, nobody could ever dare to offend another for fear of inducing them to swipe right. Even if murder remained illegal, the idea of giving impulsive and irrational human beings access to such an easy, mundane means of taking life seems profoundly troubling.

Yet there is no principled difference whatsoever between the death app and a gun. Each allows anyone to kill anyone at the touch of a button. Each confers upon the individual a kind of “magic wand” that can disappear another human being with a mere touch. The pull of a trigger, the swipe of a screen. Guns are like Tinder for death instead of sex.

If gun rights supporters are committed to their principle, then, they should be willing to state that they would have no problem with the insta-kill app. If they would have a problem with the death app, they should explain what the relevant differences between it and a gun are. Otherwise, each of them should be willing to state flatly that their definition of freedom is: “I should be permitted to carry around a button that allows me to strike you dead whenever I please.” This is the argument that is being made.

The death-button idea exposes something about guns: it’s only because guns have been normalized over time that we aren’t more disturbed by them. It’s strange how much the instincts on the gun and button differ so strongly given how few the differences between their capacities are. You’re giving the individual precisely the same power to decide whether or not to take life. There is no objection that can be made to permitting the death button that can’t be made to the gun. Yet one is viscerally disturbing, and the other is considered a perfectly sensible thing for a human being to want to own. If someone had a button on his desk with a skull and crossbones on it, that could instantly vaporize anyone in the room, that person would probably be thought of as deranged. And yet if an executive keeps a gun in his desk, he is treated as legitimately exercising his right to self-defense. 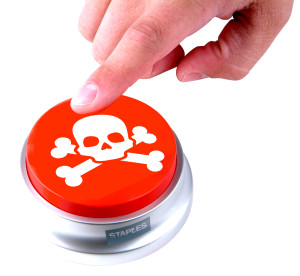 Several objections will inevitably be made.

First, we will hear the usual argument that there is no difference between the possession of a gun and the possession of a knife. Each gives the individual the capacity to take a life. Each makes murder easy. Yet knife control is a ludicrous concept, one that would unreasonably impede ordinary life-functions like eating. If guns and the death button are so horrible, why aren’t knives?

The knife argument has always been strange, though. The capacity to inflict harm is on an entirely different scale. Would the Orlando incident have been possible with a carving-knife? Would Norway? The Bataclan? (Attempts at mass murder by knife end up with somewhat lower fatality counts.) But the act required to kill is also somewhat different. When I wish to murder an acquaintance with a knife, I must plunge the knife into his body. Ripping apart a human body using a tool is not quite so mundane an act as pressing a button. It requires a bit of a stronger stomach (perhaps why only 1.8% of people who commit suicide do so by cutting themselves as opposed to by firearm, despite the easier availability of sharp objects; also why murders by gun so drastically outnumber murders by sharp object). What guns do, then, is adjust the ratio of “capacity to commit harm” to “barriers to impulsively committing it.” The capacity increases, and the barriers decrease. The thought of stabbing someone might repulse me, while the thought of clicking “please make this person go away” on my phone requires me to overcome much less instinctive resistance. (The same argument will be made with cars. But since the level of deliberate car-homicides is extremely low, that method, too, seems to involve a depravity that makes it unpalatable to many. That’s partially because it tends to require premeditation and strategy. The problem with guns and the app is that they make it so easy to murder without premeditation and strategy.)

Second, it will be argued that while guns are justified for self-defense reasons, no such reasons apply to our insta-kill app. Our hypothetical can easily solve that, though. Our app is simply rebranded “Threat Eliminator” and people are told only to ever use it in cases where killing someone would be legally justified. Or our death-button comes with a label that says “must only be used in self-defense.” Is this all that was missing to make this device perfectly acceptable, and purchasable by every good American? Guns, it should be noted, do not have such labels on them; they, like the death button, are neutral as to what you should do with them.

I have been given other, even less compelling objections to the death-app comparison. A gun does not have a 100% chance of killing its target (alright then, our app only kills people 50% of the time. You need to swipe a couple of times if you’d like to be sure of success.) Firing a gun involves more than simply pressing a button (hardly, since even a toddler can do it, and anyone making this argument should be willing to explain the ways in which guns should be made more difficult to use). A gun is more obviously a weapon than a phone (it’s certainly not obvious to someone whom you sneak up on, and it’s unclear why we care about the appearance of a thing rather than the ability it confers). People will use the death button/app indiscriminately (tell the 10,000 people who die from guns annually that this does not already occur). The Death App is not one of the “arms” covered by the Second Amendment (but why shouldn’t it be, if it performs precisely the same function with only superficial differences?)

One final argument is that the death app would make killing even more mundane and normalized than guns do. But the person making this argument needs to explain why two things with the same power (actually, the death app is probably less powerful) should be distinguished because of a minute difference in ease. Why is that difference the one at which we intervene?  Why does the mundaneness and normality of the app trouble them, but not that associated with a device that allows murders to become an almost ordinary and ineradicable part of life?

Sketching the outer limits of the Second Amendment right to bear arms is something gun right supporters are very weak on, yet gun control supporters do not press their advantage. Even the NRA would presumably be uncomfortable vesting an individual with the ability to, say, end all human life on earth. The personal possession of nuclear weapons that can obliterate entire cities is (again presumably) not something a gun rights advocate would defend. But if that’s the case, then they must believe the Second Amendment has limits, that it is necessary to draw a line between acceptable and unacceptable weapons. But gun rights supporters will never say where that line is, or what the principle is in drawing it. The reason we would not allow a person to have the ability to kill all human beings on earth is because a person should not have that kind of capacity to kill. But what kind of capacity to kill should a person possess? How much firepower are we entitled to? The NRA and its intellectual enablers have never given a satisfactory answer to this question. (Justice Scalia, when pressed for an answer, mumbled something about how “bearing” arms means they need to be hand-held. Handheld city-destroying weapons, according to this principle, would be protected by the Second Amendment.)

As technologies improve, this question will taken on increasing relevance. What will the possibilities for handheld weaponry look like in 50 years? 100 years? It’s already the case that a gun is no different from a magic killing wand or a death app. As the decades and centuries advance, and we approach the point at which death will be but a swipe away, nobody who supports gun rights will have any principled reason to object.