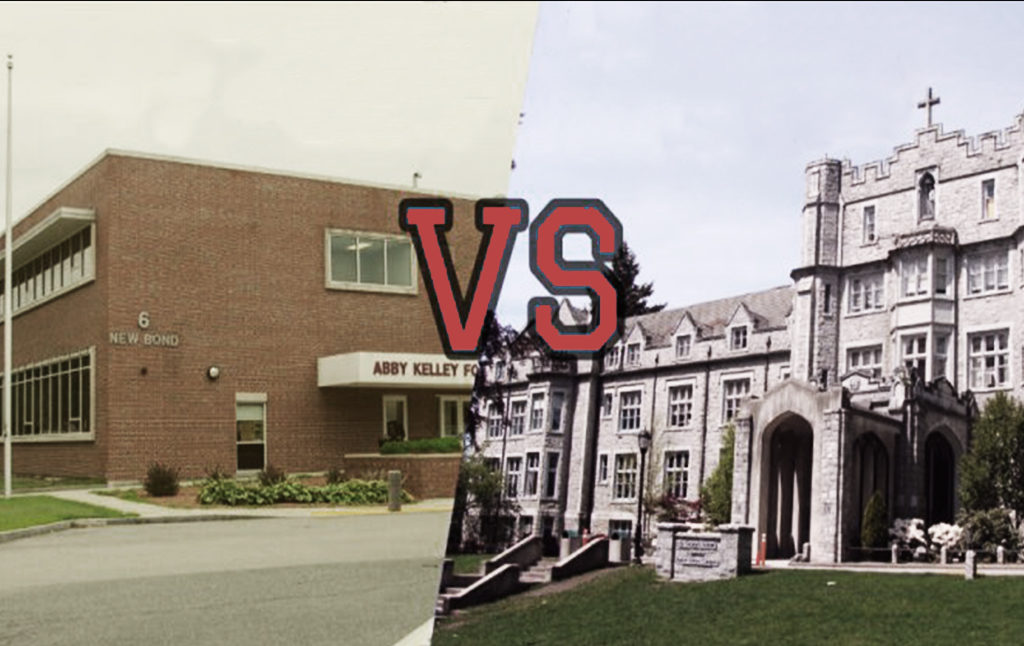 On April 23, the dedicated parents of New York City’s P.S. 199 gathered to express their concern about the city’s plan to diversify its public schools. The new plan requires middle schools to reserve one quarter of their seats for students with below-grade scores on standardized tests, in an effort to reduce inequality in the country’s most divided education system. To the parents’ dismay, the plan starts with the Upper West Side—the home of P.S. 199, and one of New York’s wealthiest neighborhoods.

“You’re talking about telling an 11-year-old, you worked hard, [but] you didn’t get…what you needed and wanted,” cried one parent, suggesting that her fifth grade child would not enjoy the reward for his test prep. “You’re telling them, you’re going to go to a school that is not going to educate you in the same way you’ve been educated. Life sucks!”

Life shouldn’t suck. Watching these parents plead, it is clear that they want the best for their children: to get ahead, to move up. Who can blame them? A child’s upward mobility is the mark of good American parenting. Our culture is rife with representations of parents sacrificing it all to give their kids the good life. It is a prized national norm.

But this norm also provides cover for some of the most egregious anti-social behavior. Time and again—and again and again—parents protest public policies designed to level the playing field against the best interest of their own children. It is a parental fallacy of composition: What’s best for the family is terrible for society.

Over the last half-century, we have succeeded in pushing many social norms in an egalitarian direction. It’s cool for Wall Street elites to support wealth redistribution. It’s no longer cool for them to consume conspicuously. High-earning Millennials demand that their employers not only pay them well, but also invest in sustainability, diversity, and community development.

But some switch flips when we enter into parenthood. The egalitarian social contract suddenly no longer applies, displaced by a Darwinian determination to guarantee our children’s success at all costs—most prominently, at great costs to other children. And for some reason, we tolerate this vicarious class warfare.

Such warfare takes many forms, some with more obvious social harms.

Consider the estate tax. Inheritance is an obvious source of inequality. In Europe, roughly half of all billionaires inherited their wealth from their parents. In the U.S., the 2018 Tax Cuts and Jobs Act protects up to $10 million in assets—per family—in the transfer from one generation to the next, while most Americans inherit nothing at all.

These transfers heavily skew opportunities in the next generation: Having money is a great way to start making money. The question of rich kids’ merit is largely irrelevant: An experiment in Nigeria showed that randomly-selected recipients of an entrepreneurship grant performed as well or better than merit-based recipients. Inheriting money can provide a crucial leg up —net of skills and abilities—to people who already have the advantage.

Yet inheritance taxes remain broadly and deeply unpopular. Among Americans, 68 percent support a full repeal of the estate tax—despite the fact that it affects only 0.2 percent of all households. The numbers are no better in Britain: 60 percent of Britons think inheritance taxes are unfair—more than the number who disapprove of levies on gas, airline flights, alcohol, or income. Most people simply hate the idea that parents would not be able to give stuff to their children.

But while inheritance is the most obvious example of vicarious class warfare, in another sense it it could be considered the most altruistic: The parents defending their wealth simply won’t be around to enjoy it. Inheritance may be bad for society in a diffuse way, but at least it is generous in a narrow one.

In education, though, the effects are more immediately pernicious. Here, the decisions of well-resourced parents bear directly on the declining quality of schools for kids who have the fewest opportunities.

Our schools are starved for resources. As recent teacher strikes have shown the country, teachers are underpaid and overworked, doing their best to compensate for crumbling schools and shredded textbooks.

The crisis of public education is the direct result of Darwinian instincts of well-resourced parents. Some children are sequestered in private schools, and others are trained up and squeezed into charters. But both are insulated from the harms of the underfunded public system—a system that is then further vulnerable to disinvestment on the basis of its resulting failures.

Here, the parents at P.S. 199 show their cards. We all know that the schools are delivering a bad education to some kids, but we tolerate it as long as it’s not our kids. Providing for wealthier kids directly deprives the poor ones. If this is a race to “get ahead,” we’re not only pushing some forward – we’re increasing their lead by dragging the others back.

The welfare of children is often used to mask the discriminatory preferences of parents themselves. Parents choose affluent suburban neighborhoods because these neighborhoods secure better schools for their children. But the neighborhoods also offer parents the benefit of a class signal, a secure investment, and insulation from poor or racially diverse neighbors. Which motivation is primary?

We can look to the patterns of parents’ reactions to desegregation across American cities and towns. When administrators try to open these schools to kids from less affluent areas, without effect on the quality of education, parents resist—as they have from Greenwich, CT, to St. Louis, MO. And when administrators succeed in redistributing resources to underprivileged areas, parents are more inclined to put their kids in private schools than pick up and move to the poorer neighborhood.

Nikole Hannah-Jones has unflinchingly chronicled the intersections of education and discrimination. She confronts the moral dilemma of maximizing one’s own child’s opportunities head-on: “Saying my child deserved access to ‘good’ public schools felt like implying that children in ‘bad’ schools deserved the schools they got, too.” And so it is—almost word for word – at P.S. 199.

What is to be done?

First, some redistribution. As Richard Reeves notes, hoarding opportunity is plainly unjust, and we must take steps to shorten the lead that rich kids are allowed to take in the race. We might start by abolishing private schools and charter schools, while leveling the resource allocation across public ones. It’s the anti-DeVos agenda: an intuitive set of reforms for those who advocate equality of opportunity.

But a more radical program starts with the nuclear family. “On what foundation is the present family, the bourgeois family, based?” asked Marx. “On capital, on private gain. In its completely developed form, this family exists only among the bourgeoisie.”

One hundred and fifty years later, it remains true. The nuclear family today operates as a mechanism for class maintenance, to the benefit of both generations. Parents fear not only that their children will suffer downward mobility, but also that their own class position is subject to their children’s success.

We should think hard about concrete steps toward denuclearization. Rearing children in more socialized contexts can spread parental pride across the community, and redistribute parental investment across children — all of whom are equally worthy of the best opportunities.

While large-scale experiments are in short supply, models for socialized childrearing date back to the work of 19th century American feminists, who proposed redesigning homes and neighborhoods to collectivize childcare, along with cooking and laundry. The 20th century saw experiments in denuclearization on the early kibbutzim. But in the context of reduced residential segregation, even the provision of public day care has the potential to shift the way parents think about the nature of their child’s best interest and the need to defend it.

The American dream of upward mobility has a nasty obverse: To move up, you must move up relative to others. As long as we continue to privilege mobility over equality, we will have parents pushing their kids forward, happy to let the other kids fall behind. If we truly care about the kids, we must use a parent’s love to propel a broader transformation.

NOTE: We are tremendously grateful to our own wonderful parents.