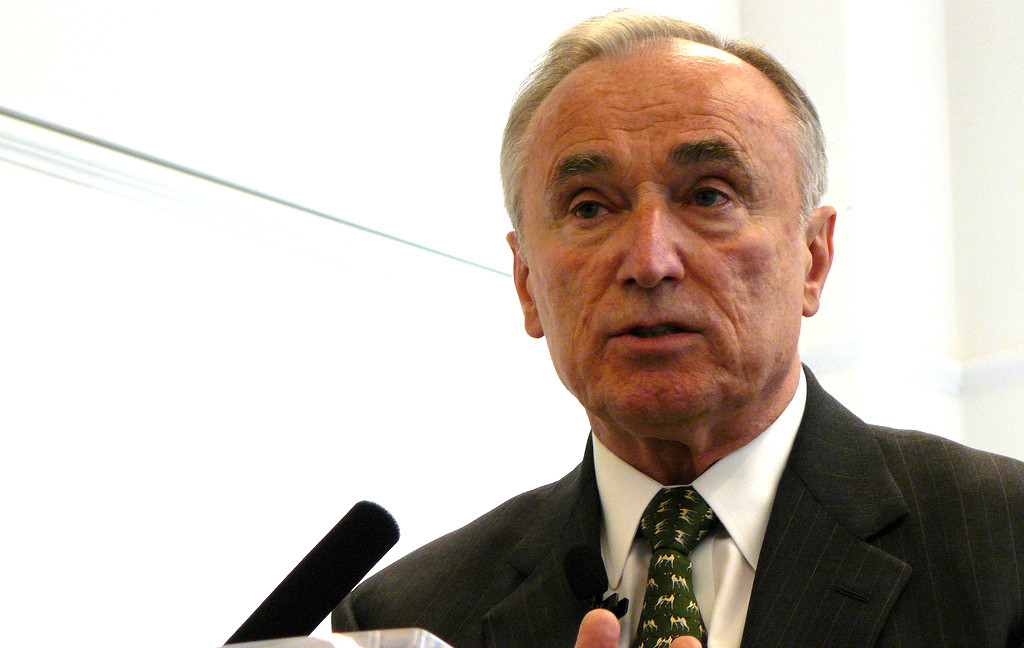 New York police commissioner Bill Bratton recently announced that, come September, he would be stepping down from his post. After only two years on the job, Bratton is heading for the private sector, where he will become an advisor to “Teneo Holdings,” a consulting group founded by a former aide to Bill Clinton.

The move is a natural one, given Bill Bratton’s career trajectory. Over the years, Bratton has become very unusual kind of police officer: a “celebri-cop” who flits between the private sector and government service, alternating between lucrative consulting gigs and high-profile municipal appointments.

Before Mayor Bill deBlasio brought him on in New York, Bill Bratton headed up the police forces of both Boston and Los Angeles, as well as a prior stint in New York under Mayor Giuliani. In his public role, Bratton became known as a major advocate of so-called “broken windows” policies, a fashionable conservative “theory” of policing that advocates focusing on low-level property crime in order to deter higher-level violent crime. In practice, because it explicitly suggests a disproportionately punitive approach to minor crime, “broken windows” often translates into the systematic harassment of homeless people and African Americans. This has made the practice “controversial.”

Indeed, the “broken windows” technique could be seen in the 2014 death of Eric Garner, which happened only six months after Bratton resumed his post as head of the NYPD. Garner was confronted by police for selling untaxed loose cigarettes, and it was Garner’s outrage at being continually harassed that led police to tackle and ultimately kill him.

Bratton’s continuing embrace of broken windows practices in the face of evidence has made him an ongoing target of civil liberties groups in New York. The ACLU lamented that “Bratton has stubbornly held on to the philosophy of ‘broken windows’ policing.” Bratton has faced ongoing pressure from the Black Lives Matter movement, which he has claimed practices “bigotry.”

But it’s not surprising that Bratton might have been clueless in the face of BLM’s rise; he is an old-school adherent to the Moynihan Report notion that the “distintegration of the family” is a far more salient factor than poverty in understanding the causes of crime. He has called rappers “basically thugs,” said that minorities trust the FBI because they “rely on the federal government so much,” and claimed that he has trouble hiring black police officers because it’s hard to find black men without criminal records.

But while Bratton’s racial history is disturbing, it is predictable. Rather, it is the business side of Bratton’s career that makes him unique in American policing. Bratton is possibly even more businessman than cop, having passed repeatedly through the notorious “revolving door” of U.S. politics, that rewards government officials with high-paying corporate jobs.

In his new capacity at Teneo Holdings, Bratton will “advise CEOs on how to deal with issues ranging from terrorism to cybercrime.” Teneo is a well-known golden parachute for ex-government workers looking to turn a profit in the private sector, and in recent years it has brought on advisers including former Senate majority leader George Mitchell, and Lord William Hague, the former British foreign secretary.

But Bratton’s business dealings extend far beyond Teneo. He has accumulated a good bit of wealth over the years in a variety of schemes. When he left the LAPD, Bratton joined “Altegrity International,” a global security firm. Just before his return to New York, Bratton won a $250,000 contract to consult with the Oakland Police Department as a member of the Strategic Policy Partnership. Similarly, before his stint in Los Angeles, Bratton had been a consultant to the LAPD in his position at Kroll Associates. All of this has led to the creation of a kind of “Bratton Brand,” which sells policing expertise all over the world (Conservative Prime Minister David Cameron even wanted to bring him on to head London’s Metropolitan Police.) Bratton has worked as a paid television analyst of policing for NBC, and dishes out advice at the Aspen Ideas Festival. But Bratton’s specialty is “re-engineering police departments,” moving to a city, equipping the police department with large amounts of military gear (“You name it, we are buying it,” Bratton proudly reported of the NYPD), and then hopping back through the revolving door onto more corporate boards.

Bill Bratton is not just a consultant. In fact, he’s something of an entrepreneur. In addition to his other funding streams, Bratton has founded two companies under his name, “Bratton Technologies” and the “Bratton Group LLC.” Bratton Technologies is the originator of “BlueLine,” a kind of “LinkedIn for law enforcement.” It remains unclear why cops would need a dedicated cop-only social network. But BlueLine does serve a purpose. It helps technology and weapons companies market their products to local departments, reaping lucrative contracts and making sure no municipality misses out on the latest in advanced weapon systems. BlueLine “enables vendors serving the law enforcement community to more effectively reach tens of thousands of individual police departments, forming a first-of-its-kind global law enforcement marketplace.”

Bill Bratton also served on the Board of Directors of Motorola Solutions and SST. SST markets “ShotSpotter,” a gunshot-locator technology. ShotSpotter operates by placing microphones all over cities, which are intended to detect possible gunshots and alert police accordingly. The high rate of false positives has called ShotSpotter’s effectiveness into doubt, and some police departments seem to view it as an enormous waste of money. But ShotSpotter also comes with serious civil liberties implications, since it places all parts of a city under constant secret audio surveillance by police (Yes, this likely violates the Fourth Amendment).

But despite its problems, New York City embraced ShotSpotter, unveiling a multi-million dollar system shortly after Bill Bratton stepped down from the SST board and joined the NYPD. In 2014, while he was NYPD commissioner, Bratton was paid nearly $50,000 by SST, even as he oversaw the implementation of a $3 million contract between SST and the city. Shockingly enough, earlier this year Bratton called for the city to spend many more millions of dollars purchasing additional ShotSpotter equipment.

Bratton’s conflicts of interest are endless. (The Village Voice said they trailed from him “like toilet paper on an old man’s shoe.”) Another security firm Bratton worked for was given over ten million dollars by the city of Los Angeles while Bratton was in charge of the LAPD. And Motorola, naturally enough, supplies the NYPD with millions of dollars in communications equipment.

Bill Bratton has successfully bridged the law enforcement and corporate worlds like no other police officer in the United States. Few other police commissioners publish business books, after all. (Bratton’s book is all about “collaboration” and “networking,” presumably collaboration between city police departments and firms trying to sell them large amounts of expensive technological devices and military-grade weaponry.) Bratton has successfully built a multi-million dollar scheme, by which he introduces cities to the “theory” of harassing vandals and sex workers, and in exchange reaps vast sums of money from both taxpayers and corporations.

Is there anything terribly wrong with that? It’s a ‘free country’, after all, and if Bratton has find a way to make policing work for him, perhaps we should congratulate him. But once we remember that police officers carry guns, and that police have a common tendency to use those guns, and that black lives do matter, Bratton’s new model is somewhat terrifying. When policing is driven by the financial incentives of companies looking for contracts, and when police commissioners have major money to make, it’s easy to foresee a world in which ordinary people suffer while freelance supercops like Bratton do very well for themselves. If the Bill Bratton-style rent-a-cop is the future of 21st century policing, then God help us all.