Why Bernie Has To Win 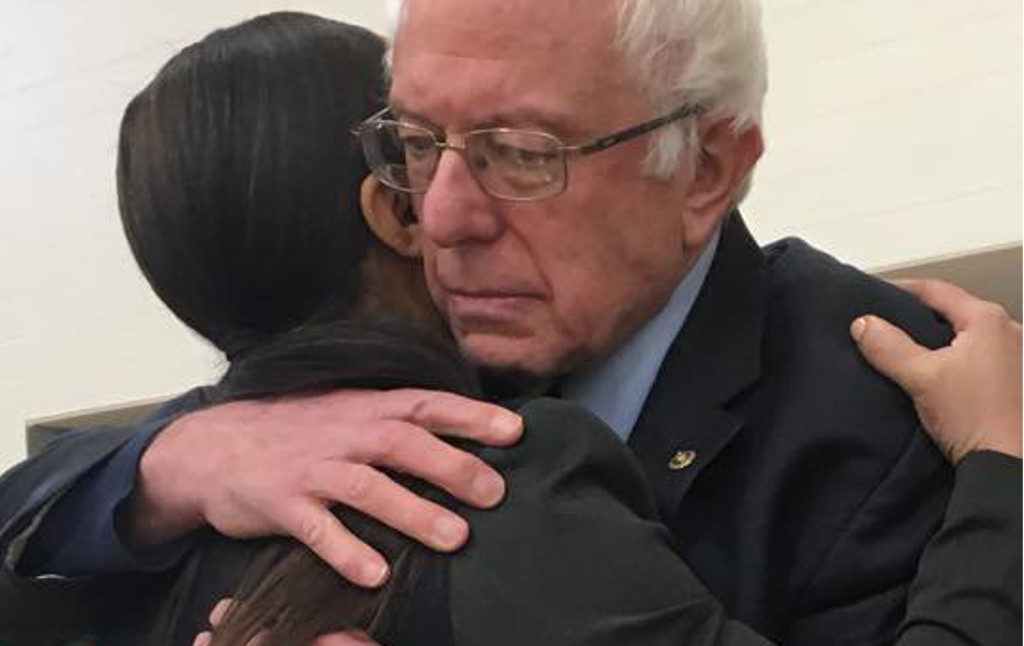 This man will sacrifice so much to bring about a better world. He needs all of our help.

First, if you haven’t seen this new incredibly moving ad made for Bernie Sanders, watch it now, as it’s critical context for what follows.

I know it’s a piece of Bad News for his campaign that will raise Critical Questions, but I don’t think I quite realized how much we need Bernie Sanders—or how much I need him, personally—and how desperately urgent it is for us to elect him, until this afternoon, when the news came out that he had been hospitalized for a heart attack.

When someone has a brush with some serious medical problem, the idea of losing them inevitably flickers into your mind. And when that happens, you realize what they really mean to you, because you can see for a second what the world would look like without them. The sheer terror with which I contemplated a world without Bernie made me realize just how important he is right now.

I am already feeling strange saying this, because I am so grossed out by personality cults, and I hate the idea of lapsing into adulation of a politician, and I’ve always tried to maintain a critical stance on Bernie even if I clearly prefer him as the Democratic candidate. I do not love people I do not know, and I have never met Bernie, so I do not love Bernie.

But I also feel like this candidacy is a once-in-a-lifetime chance to do something incredible, and that if we don’t take it we’ll regret it, and that he knows that, and that he’s willing to destroy himself and shorten his life and give up whatever he might have wanted to do with his twilight years in order to accomplish the most serious political mission of any of our lifetimes. It has to be done, and he knows it. I don’t think he’s particularly glad that it’s fallen on him to do it, but it has. And so he will do it or he will die trying, and the rest of us need to do whatever we can to make sure he doesn’t have to die trying. If he’s willing to kill himself for this, if he’ll fight to the last breath, who are we to talk about the Questions and Doubts about Whether He Can Do It, instead of spending our time making sure that he does do it. Don’t be the person who spent their time watching Bernie and speculating about whether he would hold out.

What is happening right now is that an old man is carrying the most colossal imaginable weight on his shoulders. It is the weight of all of those people you see in that ad, people drowning beneath medical bills and student debt and terrified of climate change and taking care of dying relatives and juggling miserable jobs they work from can’t-see in the morning to can’t-see at night, the people who come up to him and beg him to please please just help them, make it okay, fix this. And you can watch him in that video promising them that he will do everything he can to fix it. And the news that he had a fucking heart attack means we’re learning just what he’ll do to carry out that promise, and when those people hug him and beg him, he knows that it doesn’t matter whether he’d rather be sitting by Lake Champlain with his grandkids instead of crisscrossing Iowa all winter listening to desperate strangers tell him about the worst things that have ever happened to them. He’s got to do it, because there is so much riding on it, and history has put him in a unique position, and if that happens to you then, sorry, you have to do what you’re put on earth to do, and if it kills you, tough luck.

I realize that nobody runs for president out of entirely selfless motives, and there is a phenomenal degree of self-aggrandizement inherent in the belief that one deserves the most powerful office on earth. But someone has to do it, and I think Bernie Sanders has looked at the facts and realized that nobody else can do what he can do. And I think that’s just obviously true. I agree with what Dahleen Glanton just wrote in the Chicago Tribune:

“He forces us to consider what America, at its best, would look like. He dares us to dream ideas that are bigger than anything we have ever seen. And he challenges us not to cower in fear, thinking it could never happen, but to ask instead, ‘why not?'”

There is a reason why all the other Democratic candidates are just copying, to greater and lesser degrees, Bernie’s own message. Everyone knows that Bernie has something special. It’s certainly not his looks or the warmth of his personality. In fact, it’s more about stubbornness and authenticity: people understand that he means what he says and that he will not sell you out. There has never been another successful U.S. politician who has felt like this. No other candidate in the Democratic primary comes close to him on these qualities. Even the better ones seem like they might be a little fake, like it’s not clear whether they’re saying what they’re saying because they mean it from their heart or because they’re running for president. Bernie’s been saying it from age 18 to age 78, so you can be fairly confident he means it.

Dahleen Glanton’s Tribune column suggests that because Bernie is so uniquely inspiring, he needs to hurry back to the campaign trail. I disagree with her there. He needs to recover. He had a damn heart attack. What I think needs to happen instead is that the rest of us need to recognize what we have been doing: we have been watching Bernie from the bleachers, cheering him on as he staggers with his crushing weight, never stopping to wonder whether we should come down and take some of it off him. Bernie’s supporters need to respond to this with a giant wave of activism, by pouring themselves into his campaign the way he himself has done.

To be honest, Bernie shouldn’t have to be exerting himself in the way he has been. Because this campaign isn’t about him. In fact, if Bernie is elected, he shouldn’t have to be doing the bulk of the work. He is a vehicle for the creation of a people’s presidency. We are not nominating him because he is a messianic leader who will solve our problems and personally guide us to the promised land. We are nominating him because his is the name we put on the ballot in order to achieve power. This campaign isn’t about Bernie Sanders, it’s about getting the Bernie Sanders agenda passed: Medicare for All, a Green New Deal, free college, workplace democracy.

I actually feel like Bernie’s hospitalization is a sign that we have to do more to get him elected. He is the most effective possible weapon we have against Trump, and his presidency would be an opportunity for an unprecedented transformation of the political system. That was true in 2016, and Democrats botched the chance of a lifetime. Now, we have one last shot. Are we going to sit and Raise Questions from the stands or are we going to commit ourselves to making sure that this time, we do not let Donald Trump win the presidential election? Bernie will fight until his very last breath to make this a humane country that cares for its people. He will take on the entire media and the wealthiest, most powerful people in the country, who despise him and want him to fail and will try to destroy him using every means they know how. Who but an immortal could possibly hope to pull this off at Bernie’s age without damaging their health? And yet we know he will keep it up no matter what it does to him, because of the trust that people have placed in him and the burden history has thrust on him. That’s what he will do. So what will you and I do to help?