“Roma” and the Social Alienation of Domestic Workers 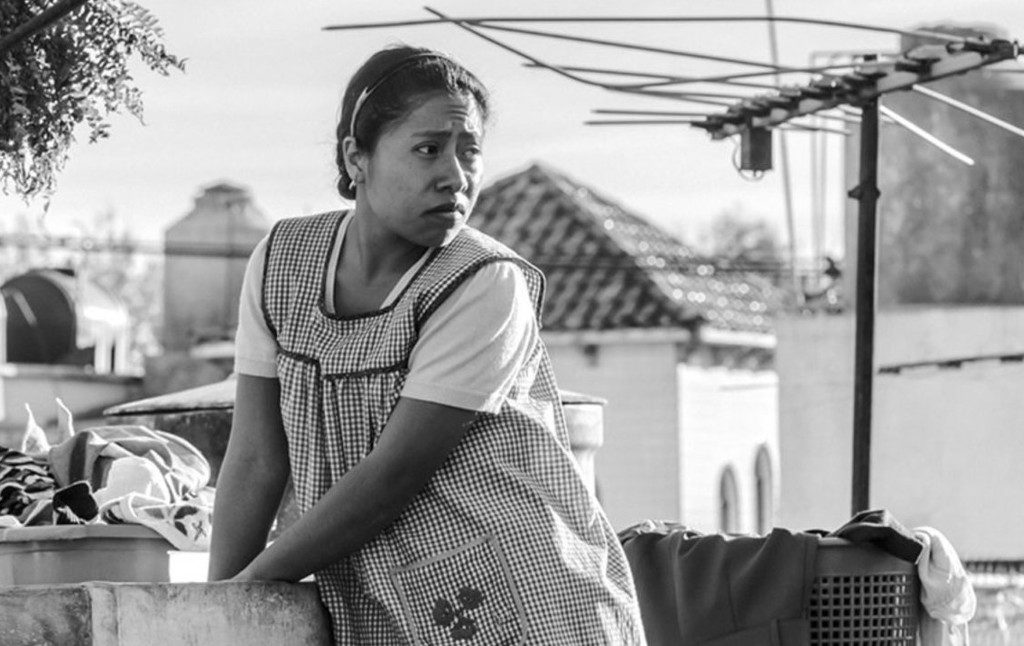 Labor is too often hidden in plain sight…

Spoiler alert: What follows includes spoilers, so we recommend you read this article after you’ve seen the movie, if you intend to watch the film and would like to be surprised.

The film starts with an image of soapy water washing over dark and light tiles, then the image of an airplane flying high overhead, a tiny reflection in the puddle’s surface. The title appears in bright, flashing yellow: ROMA. We see a young indigenous woman with long black hair, humming a song: “When I tell you that I’m poor, you won’t ever smile again, I long to have it all as I lay it at your feet, but I was born poor, and you’ll never love me.” She scrubs a garment in the sink, as children run around nearby with their toy guns.

Roma is a story of a housemaid, Cleo. It’s a memory of director Alfonso Cuarón’s childhood in Mexico City, based on his real-life nanny, Liboria “Libo” Rodriguez. Cleo works for a white family: a couple, Señora Sofia and Señor Antonio, whose marriage is crumbling, and their four children, Toño, Paco, Pepe, and Sofi. Cleo’s days are spent preparing meals, cleaning up after the family dog, and looking after the children. Caretaking is a constant job for Cleo. We barely see any of her life away from the family. With no private life, Cleo is alienated from society, with no sense of personal agency. The same institutions that rely on Cleo’s labor to produce society exclude her equal participation in it. Roma’s seminal contribution is the light it shines on those whose labor is hidden in plain sight.

Most Americans, I suspect, are not very familiar with the stories of real-life people like Cleo. Born into an indigenous community in Oaxaca, Mexico, Cleo migrated 300 miles north to the Roma district of Mexico City, leaving behind her own native family to work for another family. Cleo is a representative of the approximately 63 million domestic workers globally, 225,000 of whom currently labor in Mexico City. The same forces of global capitalism that pushed the indigenous men of central and southern Mexico to travel north in search of work—first in the maquiladoras (manufacturing sweatshops run by foreign multinationals) and then ultimately to work sites in the United States—also drove indigenous women like Cleo to Mexican cities. Today, 90 percent of domestic workers in Mexico City are indigenous. Unsurprisingly, the conditions of work can be cruel and dangerous. Every year, a staggering number of domestic workers report physical and emotional abuse. Only in December did Mexico’s Supreme Court grant domestic workers access to social security benefits.

Shot entirely in black and white, Roma is an exploration of opposing motifs: love and war, past and present, and, most prominently, rich and poor. Cleo is conscious of her place in this history, aware of how her class strips her of historical agency and her ability to change her circumstances. When her coworker, Adela, tells Cleo that the government has seized the land that Cleo’s mother lives on, our protagonist helplessly replies, “What can I do?” Cleo’s only consistent human interaction besides Adela is with the family she works for, but this relationship is painfully awkward: Cleo is part of the family, but also removed from it. On an afternoon while the family is home, cuddling on the couch and laughing at a comedy, Cleo is picking up the dirty plates, smiling to herself as she watches from behind the couch. When she kneels next to the couch to pick up a tray, one of the little boys, Paco, puts his arm around her and she briefly holds it, but only for a few seconds before Sra. Sofia intervenes with a request for her to prepare tea. Small moments like this pervade the film, brief expressions of love and empathy that are just as quickly suppressed. Cleo knows that she is a hand before she is a heart. We see this most clearly when Cleo is fearful to tell Sra. Sofia of her pregnancy because she’s afraid she’ll lose her job.

“The relationship that was developed with the nannies became strong because the family, especially the children, got very attached to the nanny.” says Professor Benjamin Juarez of Boston University, an expert in the cultural studies and art of his native Mexico. “They belonged to the family, but they also didn’t. It was always a very complicated, socially and ethnically charged relationship.”

The film’s tension reminds me of my own childhood. Like Cuarón and other members of the Global South’s middle class, I grew up with a beloved housemaid in Bangladesh. She waved to us while we boarded the plane for our move to America, and she stayed with my extended family after we left. She phoned us weekly, she called me her sweetheart, and she always hugged me like my own mother. But I still noticed the bipolarity of our relationship: how every night, after she fixed us dinner, she would, like a reflex, retreat to the kitchen, where she sat and ate in solitude, the curtains draped in front of her while my brother and I watched her shadow from the dinner table.

In Roma, we don’t see much, if anything, of Cleo’s life outside the family. We see her going on a double date with Adela. We also see her reunite with a family friend’s housemaid, Benita, on Christmas. While the families dance upstairs, Benita grabs Cleo and takes her next door, leading her down an endless staircase to an underground party. When they arrive, Cleo is wide-eyed, smiling, and incredulous to be in a place where people like her are drinking and dancing. “They allowed you out?” she asks Benita, astonished.

Cuarón carefully uses a mixture of close-up shots and wide angles in tandem to illustrate the separation of Cleo’s life from everything else around her, both the family she works for and everyday life in Mexico City. Using a wide lens and dynamic range, Cuarón at times lets the viewer watch life in Roma as if it were happening before their eyes. We witness the outbreak of the Corpus Christi Massacre of 1971 and student protesters marching through the streets. But these events receive no explanation, nor do they need one, because they just serve as the backdrop of Cleo’s life. She is merely a bystander who is unable to participate in society. Instead, her attention is consumed by small material objects that represent sources of great tension, which Cuarón positions in close-up shots—the dog’s droppings, the tea cups for Sr. Antonio, her broken glass of mezcal that someone knocks over at the party.

Sometime after she gives birth to a stillborn baby girl, Cuarón captures Cleo solemnly staring out the kitchen window. Sra. Sofia gathers the household to tell them they are going on a beach vacation to Veracruz. They are bringing Cleo along, and Sra. Sofia tells the children Cleo is not to be working, apparently a gesture of kindness in light of Cleo’s recent bereavement. At the beach, the waves ride high and Sra. Sofia warns the children not to go too far into the ocean, but Sofi and Paco do anyway. Cleo, who doesn’t know how to swim, runs fearlessly into the ocean to rescue them. The waves push them back to shore, where the family reunites. As they hug and cry together, Cleo cries out, “I didn’t want her. I didn’t want her to be born.” The family holds each other closer and tell Cleo they love her.

Although most viewers found this moment to be a heartfelt resolution to the discomfort they felt throughout the film, I saw it to be much darker. On one hand, there is a shared moment of vulnerability with the family that evokes a sense of comfort, but it also plays into the film’s constitutive uneasiness—emphasizing the sad, dark truth that Cleo is unable to save herself. Cleo reconciles herself to the loss of her child because she knows that this child would have been raised without a father (the man from the double date with Adela has long since disappeared), and with a mother who is unable to care for her. Her status as a domestic laborer strips her of any ability to have a family of her own—the physical and emotional labor she would have given to her own children is consumed by the needs of the family she serves—but also prevents her from participating as a full, equal person in the life of her employing family. The scene perfectly distills Cleo’s alienation. She has no ownership over the children she cares for or the home she has created for the family. And yet, by spending all of her time laboring for them, she has her own sense of self stolen from her.  Much as the manufacturing worker labors to maintain the well-being of a business in which they have no personal ownership or stake, even at the cost of their own life, Cleo is able to save her surrogate children, but never her own.

Recently, Variety questioned Cuarón as to why the film was shot in the present, looking into the past. “It was probably my own guilt about social dynamics, class dynamics, racial dynamics,” he replied. “I was a white, middle-class, Mexican kid living in this bubble. I didn’t have an awareness. I [had] what your parents tell you—that you have to be nice to people who are less privileged than you and all of that — but you’re in your childhood universe.”

When the family returns home from the beach trip, the children marvel at Cleo for saving them. They speak of going to Oaxaca to see Cleo’s home village, showing an interest in her individuality and personal history for the first time. But quickly after, it’s back to business, with Cleo walking down to the kitchen to fix the smoothies the kids asked for. She is back to merely being their helping hand. The film concludes with a plane, again, flying over the house. A life of mobility and freedom exists somewhere, but those things are far away from your imagination when you’re Cleo.