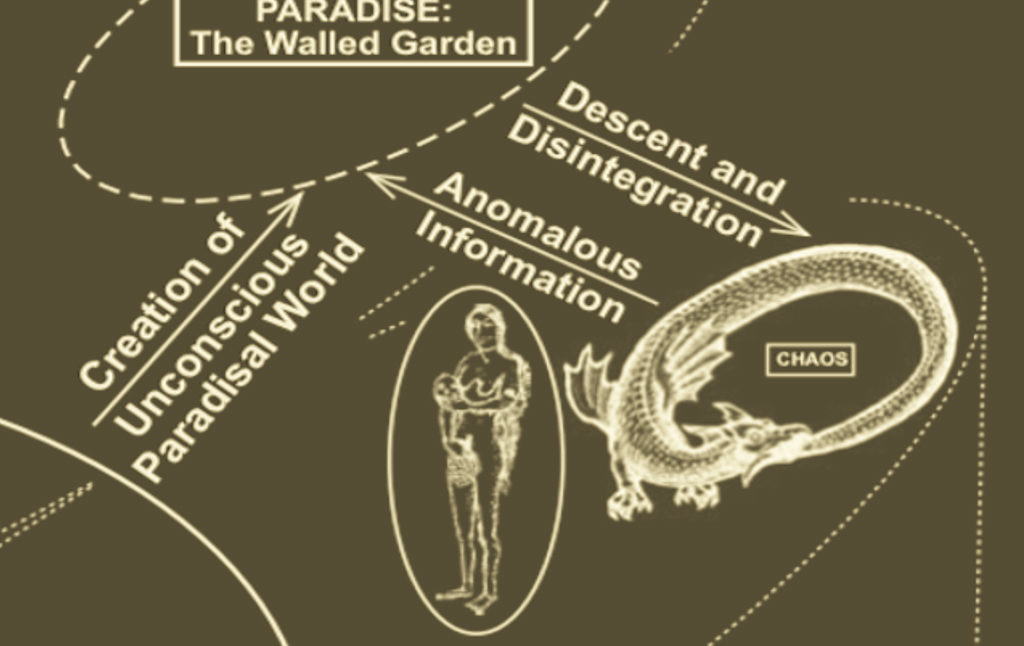 Identify the principles of masculine order and feminine chaos…

If you ask Jordan Peterson, best-selling author and professionally miserable Youtuber, the complex and multivariant strains of human myth-making can all be boiled down—like a lobster in a pot—to one very simple syllogism: Order is masculine, chaos is feminine, and socially-enforced monogamy is the only cure for male unhappiness. (He does not posit a cure for female unhappiness; the joy of chaos is obviously its own reward.) Peterson’s work has become very popular among incels, gamergaters, and other internet-men who have never studied the humanities but feel perfectly entitled to opine at great length about human history, religion, art, psychology, and politics. Their affection for Peterson’s teachings makes a great deal of sense, give that Peterson doesn’t seem to know much about anything, either.

If a mythic superstructure of masculine order and feminine chaos undergirds the entirety of human thought, we would expect to find it in every myth. Read the following examples and answer the questions in essay format. This is a take-home, open-book exam, and it counts toward 30 percent of your final grade.

1. The Egyptian goddess Ma’at/Maat is frequently represented in Egyptian art as a seated young woman, but she’s more than a mere deity. According to classicist Christopher A. Faraone and Egyptologist Emily Teeter: “…maat appears both as the abstract concept of truth and correctness in the cosmic and social spheres and in anthropomorphic form as a goddess (Maat) who personifies truth and order.”[1] Ma’at/Maat was highly significant as a guiding principle in Egyptian culture, and embodied subtly different meanings at different points during the long development of Egyptian religion and philosophy. The Egyptologist Vincent Arieh Tobin tells us: “Ma’at was not simply one aspect of Egyptian thought; it was, in effect, the entire basis for the Egyptian understanding of the universe. The importance of Ma’at, moreover, extends beyond Egypt, for it was part of the general Near Eastern intellectual milieu out of which there eventually grew the complex system of biblical theology.”[2]

Ma’at is less familiar in the contemporary imagination than her father, the sun god Ra. Together, Ra and Ma’at oppose chaos (isfet) as embodied by the masculine serpent god Apophis/Apep, who is constantly trying to devour the sun and end all life. Apophis, however, is no real threat to the order of the cosmos. Maulana Karenga, professor of Africana Studies, writes: “There is never any doubt that the Maat of Ra will triumph over the isfetic threats of Apophis.”[3] That’s quite a relief.

A. Reconcile the masculine serpent god Apophis, servant of disorder, and the feminine goddess Ma’at, triumphant symbol of order, within a Petersonian framework. Show your work.

B. Is it possible to have a universal principle of mythic truth with a glaring counter-example from one of the most significant and influential ancient human civilizations?

C. Are “universal principles of mythic truth” doomed to failure no matter what because human beings are complicated, and myths contradict each other even within the cultures that spawned them, let alone across the wide spectrum of human faith, belief, and tradition?

D. Between you and me and Peterson, do you actually fear sometimes that a raging, violent masculine darkness will swallow light and truth and order?

2. In the Lokasenna[4], the Norse god Loki shows up drunk at a party and engages in flyting—that is, an insult contest. Loki, god of fire of mischief, is a disruptive, chaotic force in Norse mythology, and also associated at times with serpents. When he bursts into this particular party, he calls all the goddesses unfaithful sluts, and accuses the male gods of cowardice and other “unmanly” (ergi or argr[5]) behaviors. It’s all a big mess: Odin brings up the time Loki turned into a mare and fucked a stallion and gave birth to an eight-legged horse; Loki brings up the time Odin went around dressed like a witch (the compilers of the Lokasenna fail to specify whether or not Odin lived in a swamp). Everyone’s drunk; everyone’s miserable; everyone’s unfaithful; everyone’s failing to uphold monogamy and the gender binary. Loki may be the most openly genderfluid of the gods, having mothered that eight-legged horse, but nobody—from the crossdressing Odin to the masculine ski goddess Skadi—is particularly good at obeying cishetero, monogamous norms. Even Frigg, Odin’s seemingly conscientious and agreeable mother-goddess wife, totally banged Odin’s brothers while he was away. 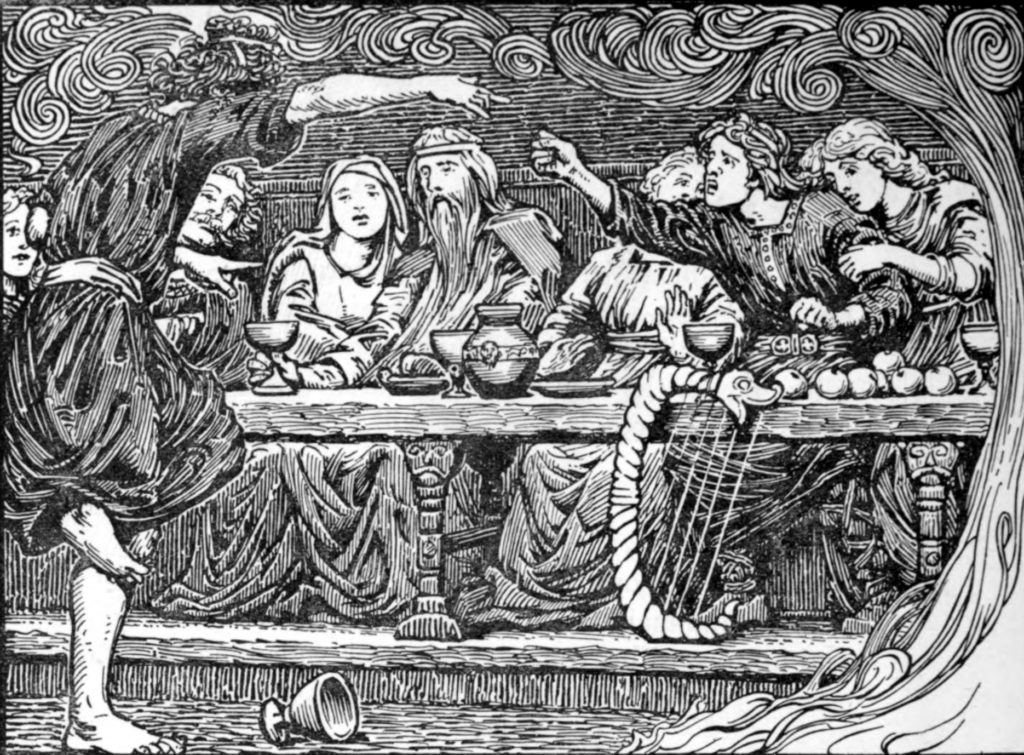 When Loki first joined the Aesir (the Norse pantheon), they tried to enforce moral behavior and social cohesion by giving him a goddess wife, which doesn’t appear to have had any significant impact on his mischief (plus, he was already married to a frost giantess, with whom he had three lovely monster children).

A. Was it unfair to expect Sigyn, Loki’s goddess wife, to reform a difficult trickster? Isn’t it kinda bullshit that when Loki was bound by the guts of their son Narfi to a rock, and the venom from the serpent’s fangs dripped in his face, Sigyn had to wait beside him, holding a bowl to catch the venom? What does this symbolize about the horror of enforced monogamy?

B. What would have happened if the Aesir had instead respected Loki’s previous marriage, his genderfluidity and his shifting pronouns? Given Norse cultural beliefs, would that have been a Bifrost too far?

3. Another mythological figure often associated with snakes is Athena, goddess of wisdom, born from the masculine generative power of her father Zeus. Like Loki, she’s somewhat genderfluid, refusing marriage and childbirth, and often dressing in armor. But she’s also an expert weaver, and when a mortal girl named Arachne “accepted praise that set her/above the goddess in the art of weaving,/a girl renowned not for her place of birth/nor for her family, but for her art”[6] Athena takes great offense. She challenges the impoverished mortal Arachne to a weaving contest, because much like a certain eminent lobster-philosopher, she’s extremely defensive when challenged.

Athena’s finished tapestry displays the Olympian gods in all their authoritarian patriarchal glory, upholders of the cosmic order. “Weighty on their thrones,”[7] the gods are represented as wise judges, seated high above political considerations. But Arachne, in a total SJW move, decides to depict the gods as they actually are: brutal rapists and murderers who prey upon mortals. 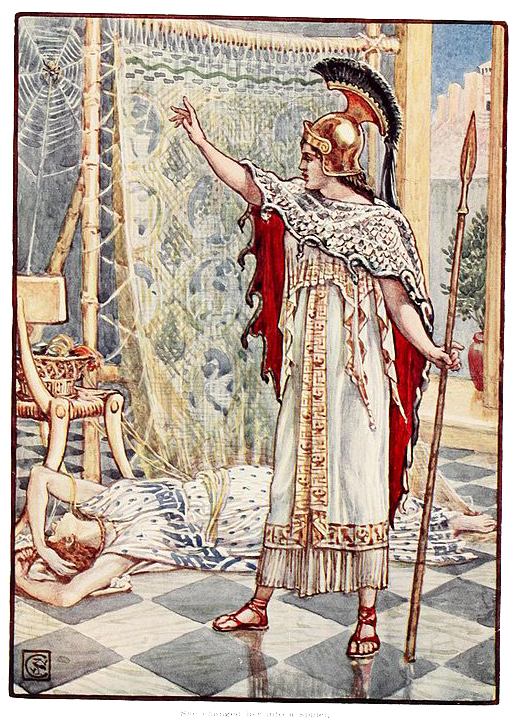 A. In some versions of the myth, Athena freely admits that Arachne’s tapestry is technically more proficient than hers, but in every version she still turns poor Arachne into a spider for daring to tell the truth about the gods. Is it possible that “political art” just means art that offends the feelings of powerful people?

B. Pretend you’re Jordan Peterson. Justify the transformation of Arachne, using the following concepts: authoritarianism, political art, and free speech. Create a coherent framework that allows you to position yourself as a defender of free speech while actually believing that all ideas besides your own are incorrect and should be suppressed.

4. Turning to contemporary mythology, we find the prevalence of the slacker husband and the long-suffering wife/girlfriend (Homer and Marge Simpson, Peter and Lois Griffin, basically every ’90s sitcom and a decent number of Judd Apatow movies). The competent but humorless wife upholds order, as a direct descendent of the Victorian angel in the house archetype. But in this depressingly familiar modern myth, the husband remains a lazy, useless, immoral slob.

A. Could it be that the wife’s conscientious and agreeable devotion to her husband merely enables his permanent adolescence?

B. Can his laziness and unwillingness to fairly participate in household chores be considered a low-key form of abuse?

C. Do we need to tell young men more than just “clean your room”, but “share responsibilities equally and treat women as equal partners, because women are goddamn human beings, not your fucking helpmeets?”

D. Could the loneliness and misery of so many young men be the result of a winner-take-all patriarchal structure that tries to enforce false gender binaries, commodifies women as property, and sets unrealistic expectations of wife + house + career in a collapsing late capitalist society?

E. Or is Marge Simpson just a chaos witch?

[4] The Lokasenna is short and extremely fun and I highly recommend reading it in full.