At Least They’re Not Even Pretending Anymore 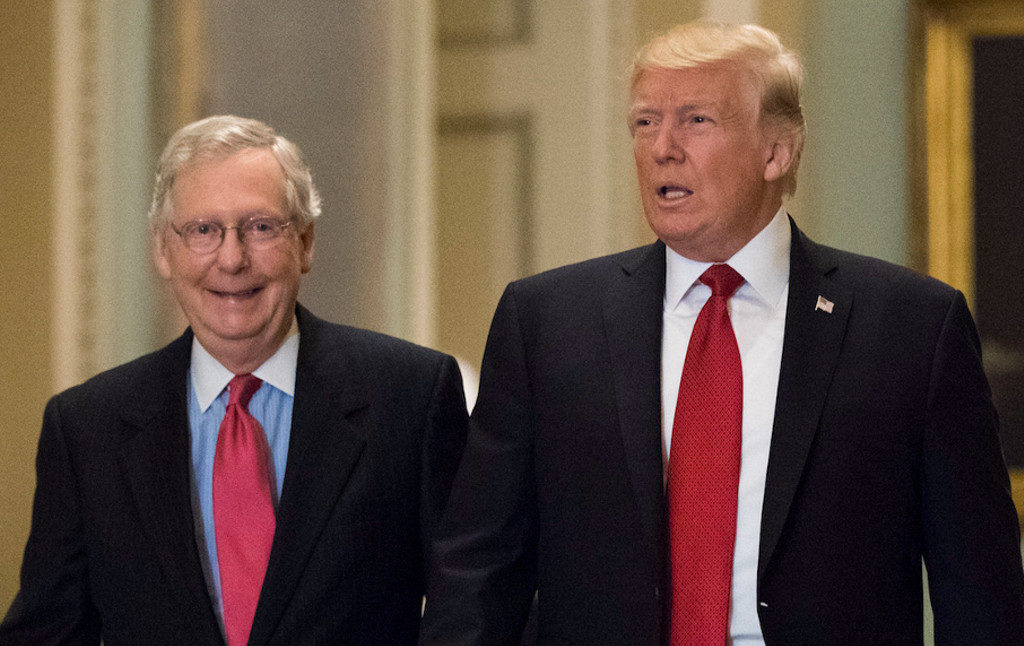 I’m not much for conspiracy theories, but I’m almost convinced that every Senate Republican is secretly working for the Bernie Sanders 2020 campaign. They certainly seem to be doing everything possible to reinforce the image of the Republican Party as a gang of plutocrats committed to destroying what’s left of the social safety net and handing out tax cuts to the already-extremely-rich. By passing a massive corporate tax cut in the middle of the night, they’ve basically written Sanders’ presidential campaign speech for him: “The Republican Party says they stand for ordinary Americans, but the only significant piece of legislation they have passed has been a massive tax giveaway to large corporations. They don’t care about you, they care about CEOs, billionaires, and billionaire CEOs.”

What’s refreshing about the tax bill is that Republicans are now barely even pretending that they care about anything beyond making rich people richer. Usually, they make at least some effort to convince the public that their policies come from a Very Serious Concern About Deficits or are Just Basic Economics. No longer: politicians who have spent a lifetime crowing about how government spending is out of control and the deficit is too high have just voted overnight to add a trillion dollars to it. The nice thing about this is that nobody ever again needs to listen to the Republicans when they insist that they oppose social spending because of Principles of Fiscal Responsibility. (Except Tennessee Senator Bob Corker, the only Republican to actually consistently uphold his anti-deficit principles by voting no on the tax bill. Bob Corker still gets to talk about Fiscal Responsibility without being instantly laughed out of the room. But none of the others. [UPDATE: having switched to supporting the bill after the addition of a provision that would personally enrich him, Bob Corker can also be permanently ignored.])

And as for Basic Economics, turns out Republicans don’t care about that either. The economic arguments for the tax giveaway are so thin that it barely even seems as if the party is trying to persuade anyone. Larry Kudlow at the National Review wrote about 600 words, declaring without citing any actual economic research that the bill would benefit everyone, “will generate way more growth and investment than mainstream forecasters suggest,” and that everyone who said it wouldn’t was delusional. (Side note: I had always assumed because he is a prominent economics commentator that Kudlow was an actual academic economist, but it turns out he dropped out of his master’s program and doesn’t even have an undergraduate degree in the subject.)

There was only the barest effort to suggest that professional economists thought this was a good idea; a Republican list of “economists” who endorsed the plan included an ex-felon, an office assistant, and person who may not even actually exist. Actual economist Brad DeLong—certainly no socialist—was so appalled at the self-contradictory misrepresentations of the few mainstream economists willing to sign onto the plan that he believed the entire profession’s integrity was threatened. A selection of several dozen of the world’s top economists, surveyed by the University of Chicago, were almost unanimous in their conclusion that Republicans’ claims about how the tax cuts would affect both deficits and economic growth were either unproven or false.

Republicans haven’t even tried to explain the mechanism by which the economic growth they promise would be dispersed to workers. Corporations are, to their credit, not saying they’re going to pass on the benefits to their lowest-paid employees, but are just openly salivating at the windfall profits they’ll enjoy. Every aspect of the Republican tax giveaway (which for some reason even staunch critics annoyingly continue to call “reform”), from its being rammed through with indecipherable handwritten changes in the middle of the night to its screwing over of graduate students, makes it look more like an open act of class warfare by the rich. Republicans have the votes in Congress to do as they please, so there is no longer any need to provide justifications for their actions. Nobody can stop them, so they can be as openly sinister and greedy as they please, punishing low-income people and rewarding the rich. (That “refreshing honesty” is kind of the paradox of Donald Trump himself: though he’s obviously an extremely dishonest person, he doesn’t really try to disguise the fact that he’s a selfish narcissistic plutocrat who cares solely about other plutocrats. It’s helpful to the left to have Republican economic policy represented by loathsome French monarch types like Steve Mnuchin and Louise Linton.)

Unfortunately, since Democrats have almost no political power, there’s nothing they can actually do to stop this. And since they don’t really have effective grassroots organizations, they can’t really mobilize popular protest either. The only good news is that by choosing to spend their time and energy doing nothing more than handing money to the upper middle class and rich, and thereby worsening the government’s financial situation in ways that will provide a ready excuse for cutting social services down the road, Republicans are making it easier and easier for Democrats to mount successful challenges to them in 2018 and 2020. When people see their insurance premiums balloon, and see America’s catastrophic inequality get even worse, the tax bill will make it quite easy to point to a culprit. The nice thing about Republicans controlling the House, Senate, and Presidency, to the extent that “nice” can ever be the right word, is that everything that happens now is on one party’s shoulders.

The only question is whether Democrats will successfully be able to take advantage of this opportunity. Past experience suggests that they’ll stumble: they’re not very good at formulating successful economic messages, because of the uncomfortable fact that they, too, are ultimately a party of the rich. It’s somewhat frustrating that party leaders didn’t do more to mobilize the public around the tax bill, the way they did on ObamaCare. Perhaps they reason that if it passes, the Republicans will seal their own electoral fate. But “allowing others to make things worse so that you can make them better” often doesn’t work out the way you expect it to (see, e.g., the Democrats who encouraged Republicans to nominate Trump). In a class war, you need to be fighting at every moment. (And make no mistake, this is a war by the rich against the poor.)

As I say, the one person who does benefit from this is Bernie Sanders. Both Democratic insiders and public polls suggest that Sanders is the leading contender for the party’s nomination in 2020. Sanders already came impressively close to winning the nomination the last time around, despite beginning his campaign with no institutional backing or national name recognition. Now, he’s the most popular politician in the country, and even former pro-Hillary partisans like Donna Brazile seem to be recognizing that they need to throw the party establishment under the bus and get on Bernie’s side. The more Donald Trump and the Republicans reinforce Bernie’s narrative about a cadre of millionaires and billionaires rigging the political system against young people and the working poor, the easier it is for him to build his political movement. The 2017 elections already provided hints that socialist candidates can be viable, at least locally. If Republicans openly embrace their identity as the party of corporate tax cuts and bankrupting government services, they will only further radicalize the left. The tax bill is horrific, but it’s so transparent in its evil that the arguments for socialism are easier than ever to make.