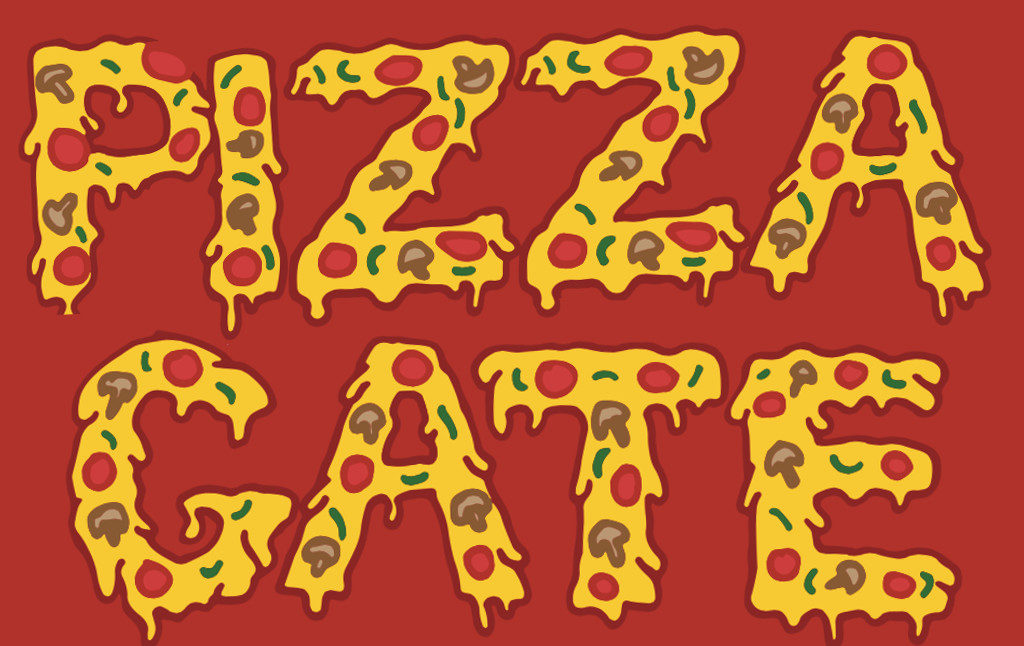 The alt-right says Democrats operate a pedophilia ring out of a D.C. Pizzeria. Current Affairs investigates…

The basics of the Pizzagate theory go as follows: a few stores down from the Politics and Prose Bookshop in Washington, D.C., there is a pizza place called Comet Ping Pong. It is a popular hangout of politicos, and has hosted numerous events for prominent Democrats. It is also the epicenter of a sinister ring of pedophiles, who use the pizza shop to lure children, whom they torture in secret rooms. At the head of the ring is none other than Hillary Rodham Clinton.

If you are of a certain cast of mind, you may consider this theory implausible. “Hillary Clinton does not run a child sex ring, and she does not do so out of a pizza shop,” you may say. And you may be right. But how can you be sure?

If you doubt the reality of Pizzagate, you clearly have not spent time with the leaked Podesta emails, which include “numerous bizarre references to pizza” being made by Clinton operatives. Consider the following email, sent to John Podesta in September of 2014:

Hi John, The realtor found a handkerchief (I think it has a map that seems pizza-related. Is it yours? They can send it if you want.)

Ask yourself: why would John Podesta have a handkerchief with a pizza-related map on it? What could such a thing possibly mean? There is only one explanation that fits the facts, and that explanation is a secret child sex ring.

Not convinced? James Alefantis, the owner of Comet Ping Pong, was formerly in a romantic relationship with Clinton operative David Brock. Alefantis was voted the 49th most influential person in D.C. by GQ magazine. Strange, don’t you think, for a pizza shop proprietor to be so influential? How does one become influential by making pizzas? The answer is that one does not. One becomes influential by running a secret sex ring for prominent Washington Democrats.

Do you need more evidence? How about this: when asked about rumors that children were being tortured in his restaurant’s basement, Alefantis denied that Comet Ping Pong had a basement. Yet photographs of a mysterious “refrigerated room” beneath the establishment were located on Instagram. Or, what about this: the ping-pong paddles on the restaurant’s menu closely resemble a known symbol for pedophilia. And we haven’t even begun to discuss the creepy art on the restaurant’s walls. Or the Clintons’ known association with pedophile Jeffrey Epstein. Or how seemingly-nonsensical pizza-related Podesta emails begin to make much more sense when you translate them into pedophilia-related terms…

You dismiss Pizzagate, don’t you? You think it is madness, you think it is conspiratorial. But what, dear reader, makes you so sure? Ask yourself: could it be that you are afraid of the truth?

Pizzagate was all rather funny until someone nearly got shot over it. Well, funny from a distance. It certainly wasn’t funny to James Alefantis, who had been receiving an ongoing stream of death threats over it. But it was even less funny when, on Dec. 6th, a man with an assault rifle showed up at Comet Ping Pong demanding the truth, firing a shot into the floor before being arrested.

Pizzagate is held up by the media as Exhibit A in a phenomenon of “fake news”; outlandish political stories that catch on through coverage in disreputable outlets, despite having no truth behind them. But it is instructive to reflect on why stories like Pizzagate catch on in the first place.

First, whether one thinks Pizzagate is “self-evidently” false or “worth investigating” depends on who one is, and what one’s life experiences are. If one is a Democrat, and spends time around the type of people who frequent hipster pizza places, the idea of the Comet Ping Pong pedophilia ring seems transparently laughable. If, on the other hand, one is already a person to whom Washington D.C. is a sinister place run by a criminal gang, Pizzagate’s falsity may not seem nearly so “self-evident.”

Coverage of Pizzagate hasn’t tended to acknowledge that conspiracy theories seem far more plausible to people on the fringes than to insiders, precisely because those people are on the outside looking in. If you have ever worked in government, for example, you are likely to find 9/11 conspiracies relatively implausible, because you know that government agencies are usually inept rather than malicious. If, however, you have never seen the inside of a federal government building (it is rather dull) a fertile and active imagination can conjure all manner of nefarious activity occurring within.

Part of the reason Pizzagate has caught on seems to reflect a cultural divide. Comet Ping Pong has weird art on the walls. Its bathrooms are behind secret doors. To the conspiracy theorists, these make it “creepy.” To Comet’s cool clientele, they make it quirky and fun. Likewise, conspirators are baffled that D.C. staffers would spend so much time on their email talking about pizza. But those inside the political world know full well that pizza is the staple meal of a wonk’s life.

An interesting feature of Pizzagate is that most of the press didn’t bother to seriously debunk it, even while insisting it has been debunked. For example, The Daily Beast dismisses the theory as follows:

The conspiracy is untrue and easily disprovable. For example, the sex ring is supposed to be run out of the restaurant’s basement, but the owner told the BBC, “We don’t even have a basement.”

Note that the Daily Beast is wrong that the owner’s contention makes the conspiracy “easily disprovable.” That’s like saying, of a man accused of a crime, that we know he is innocent because we asked him. The logic doesn’t work. It is understandable why the press would think Pizzagate too self-evidently silly to bother dealing with seriously. Unfortunately, by saying that the theory has been disproven, without actually giving any good reasons for disbelieving it, the press only makes itself less trustworthy to those already suspicious of the media. If the response to an accusation is to say “we asked, and they said it was false,” then the conspiratorially-minded will feel (quite justly) as if the press hasn’t actually considered the evidence.

There are very good reasons why Pizzagate is a silly theory. For one thing, it relies on great unjustified inferential leaps. It treats anything mysterious or confusing as evidence toward its complicated theory, instead of making any effort to find simpler explanations. And it is based on the usual brand of confirmation bias common to conspiracies: once you think you see a pattern, you’ll begin to notice it everywhere.

But instead of scoffing at the Pizzagate conspiracists, kooky as their conclusions may be, we would do well to try to understand the roots of this kind of thinking. Partially, it comes about because people don’t trust mainstream institutions. And part of that distrust is rational, or at least makes sense from an outsider’s perspective. After all, the Clintons are secretive. And they were close friends with pedophile Jeffrey Epstein. And the media are biased toward the Democratic Party. And this same media have refused to take Pizzagate seriously.

None of that adds up to a secret child sex ring in the Comet Ping Pong. Yet it’s still worth thinking about why people believe false things, and how their trust can be won back. Laughing at them, instead of clearly trying to address the roots of conspiratorial thinking, is likely to lead to encourage new and more dangerous fringe theories.