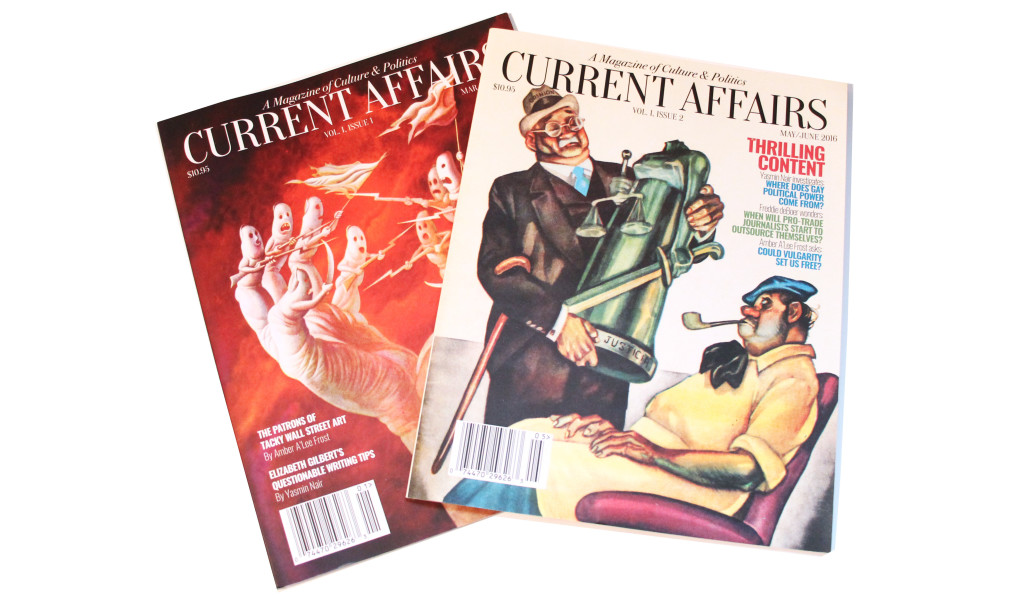 A word on our compensation practices and our commitment to paying writers punctually and fairly.

It’s no secret that the political bent of Current Affairs is broadly left-wing. We therefore get occasional questions (mostly in good faith, but sometimes not) about how the values held by our editors and contributors comport with our compensation practices. Because we believe strongly in both fairness and accountability, it is worth explaining a little bit about how our organization works, and the standards to which we aim to hold ourselves.

Current Affairs does not operate for profit. Every penny we take in, after printing and web costs, goes directly to our writers and artists. Our editorial staff are volunteers. We exist for our readers, writers, artists, and editors, and for nobody else. Whatever success we have is shared equally.

One of the main goals of Current Affairs is to help revitalize the writing economy, by helping to establish and maintain the expectation that writers are to be paid fairly and paid on time. At the moment, publications with huge budgets pay writers pittances. Even worse, they can often take months (sometimes years) to actually disperse writers’ payments. This erodes the possibility of anyone actually making a living freelancing.

Current Affairs is very young, and has almost no money. We began at the end of 2015, with $16,000 raised through a Kickstarter campaign. We have about $8,000 in the bank at any one time. So far, each of our print editions has cost approximately $5,000 to print and distribute, and we have paid about $2,000 to writers and artists for each issue. This means money is always incredibly tight.

Yet we are very proud of how we have managed to do thus far. Even given the incredible difficulties of beginning a print magazine in a digital era, we have been able to produce four issues of extremely high quality, and to build a dedicated base of subscribers in 40 states and 5 countries. Our writers have been paid, and they have been paid punctually.

So far, we have largely compensated people at the following rates:

These amounts are not what we would hope for. Writers and artists cannot live on them. They are, in fact, dismal and embarrassing. And yet they are still often higher than what publications with annual revenues of multiple tens of millions of dollars pay their contributors. The fact that we (a brand-new, volunteer-run, entity with a couple of thousand dollars to our name) can consistently pay writers, demonstrates just how disgraceful it is that large corporate media entities pay so pitifully. For them, there is no justification for not paying well for writing. We work hard to make sure we can pay as many people as much as possible. If a publication is successful, but is not paying writers well, that means it is not making any effort to pay writers well. The excuses they offer are lies.

We also believe strongly in paying punctually. The industry norm is not only that you get paid nearly nothing, but that your near-nothing payment arrives 18 months late, after about six rounds of pleading and cajoling. We do not want this to happen. Our writers will be paid immediately via check or money transfer upon receipt of the final draft of their work.

Have we always managed to live up to our principles? We have not. A few payments have been late. This was due to absent-mindedness and our failure to keep a well-organized system. Our volunteer editorial staff work hard, but sometimes things slip by them. But we are committed to doing better, and any writer or artist who sends us a reminder of our debt to them is paid immediately. We have also run a few pieces for which writers were not compensated. None of the content produced by our founding editors is compensated. We have also had contributions from some academics and students that were not compensated, or were compensated below our usual rate. Sometimes the first piece a writer has written has been free, but then all subsequent pieces have been paid. We are not happy about this; we believe that all free writing undermines, even if indirectly, the compensation expectations for writers, by increasing the available supply of free labor. However: in these early stages of our existence, some of our work, both written and editorial, has had to necessarily be produced by volunteers, simply because otherwise we would have gone out of business. Over time, we hope to eliminate free writing entirely. For the moment, our philosophy is this: while we will gladly accept free contributions, we will always compensate a writer who asks to be compensated. And we will try to apportion our budget to make sure that those who must make their living as writers get paid first. We do not mind accepting free work from those who write as a hobby, because they have another source of income and our incredibly limited budget would not be put to its best use in compensating them. It is better that that budget be spent helping more people survive as writers.

Again, however, we are not proud of this, and hope it is a (very) temporary situation. It is a shameful necessity of our earliest days. Ultimately, we want to pay all writers what they deserve. And as our magazine grows, all of our revenue after print and web costs will be directed toward paying for content and editorial work. Our writers will always benefit in direct proportion to our own success.

All of our editors are volunteers working at their own availability, but these are full editorial positions, not grunt labor. They work from project to project rather than in formal shifts. And the moment we can pay for editorial work, we will pay.

Our annual subscriptions are $60. That may seem a lot. However, it barely covers our costs. In fact, if we could charge far more, we would. Currently, we are depending on writers who are accepting far less than they can live on, and editors who are volunteering thousands of hours for free. We will therefore always make our subscriptions as expensive as possible, on the promise that that money is entirely used to improve the content and compensate the contributors. We must destroy the expectation that good content can be had cheaply. Good content requires intensive labor, thus if good content is being offered cheaply, someone is being screwed out of adequate compensation for their labor.

We are always striving to do better. We believe writers, artists, and editors should be able to make comfortable livings. We believe that, even though the miserable pay of writers can be blamed partially on the internet, media outlets also bear a significant share of the responsibility. They have taken advantage of the glut of freely available content, knowing that writers have no bargaining power. They have taken this to absurd extremes, by withholding people’s compensation, sometimes for years, knowing there is little a writer can do to change the situation. Current Affairs will do whatever it can to help solve this problem.

Again, we can only do so much. We ask that our readers kindly indulge us as we inevitably fail to fully embody our ideals. We ask them to bear in mind the harsh financial realities of our situation, and the difficulty of surviving as a non-profit left-wing print magazine. We ask them not to judge too harshly our occasional moral compromises, but also to call us out if we ever become the very thing we denounce. And we ask them to believe us when we promise that we are committed to making sure all intellectual labor is someday fairly compensated.

Finally, we ask you to consider supporting us in our effort to build a magazine that is fresh, smart, and committed to the well-being of its writers, artists, and staff. Please consider donating or subscribing today. Your money is guaranteed to end up with those who deserve it: the hard-working and brilliant people who produce our words and pictures, and who struggle daily to stay afloat in an impossible and unjust media economy.