When Will Pro-Trade Journalists Begin Outsourcing Themselves? 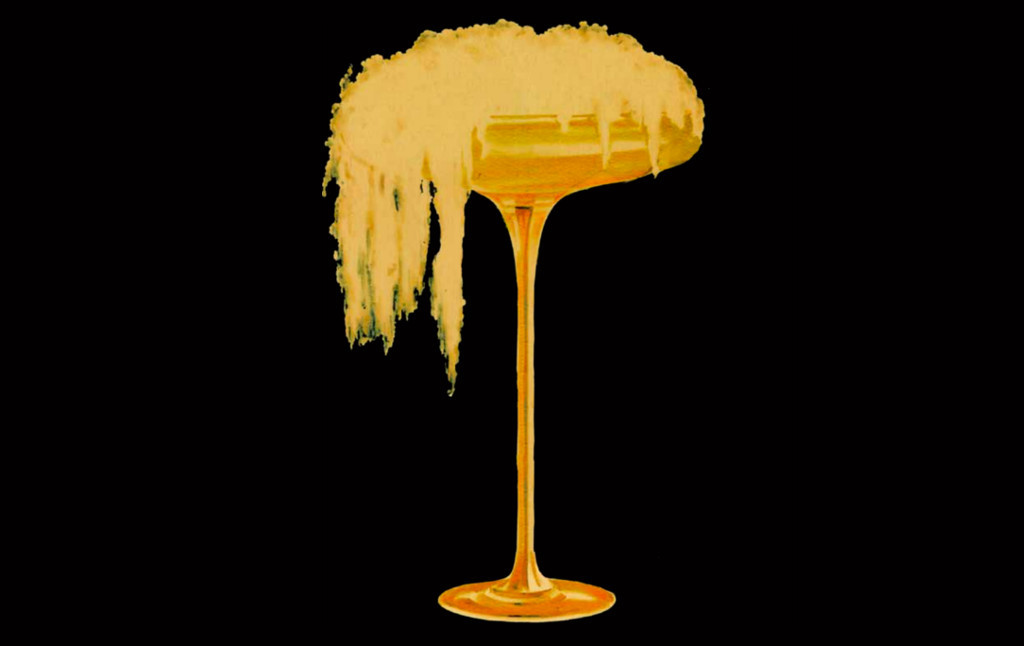 Don’t they care about global poverty?

J. Bradford DeLong, a former Clinton Administration official turned aggressive neoliberal blogger, once gave a nasty rebuke to those who lament the consequences of free trade on American workers. DeLong, like many of his peers in the media world, insists that by complaining about poverty among out-of-work Americans, we must necessarily be wishing that the Chinese had not experienced the benefits of outsourcing. He asked:

Is there a way to interpret [critics of the effects of trade with China] other than as a call to keep China a society of poor subsistence rice farmers as long as possible—keep them poor, barefoot, uneducated, and by no means allow them to work at any of the high-value manufacturing occupations we want to keep in the United States?

DeLong’s reasoning was echoed by several attacks on Bernie Sanders by liberal journalists. In Slate, Jordan Weissmann said Sanders was telling Vietnamese seamstresses that he wanted them to remain impoverished. At Vox.com, Zach Beauchamp said Sanders’ skepticism of trade means trying to help Americans while “screwing over the global poor.”

So this the phase we are in. One in which media commentators (raised in affluence and currently enjoying at least middle class incomes—who are thus, according to their own moral calculus, very economically privileged) tell Americans devastated by the collapse of the uneducated labor market that their poverty, marginalization, and hopelessness is Actually Good, because people in Bangladesh can now move from absolutely abject poverty to slightly-less-abject poverty. That is, provided the sweatshop where they work doesn’t collapse on them. And provided they are willing to endure a nightmare of nonexistent labor power, terrible health and safety standards, total impunity for their bosses, and for the women, an atmosphere of near-constant sexual threat and exploitation.

The first thing to say is that DeLong is offering a transparently bogus choice. “Help poor people in Bangladesh” or “help poor people in Yuma” is a false binary. Yes, as the working class in America have suffered, the incomes of some of the poorest people in the world have risen. But do you know who else have seen their incomes rise? The world’s wealthiest, by vast margins. Pretending that globalization is a simple matter of siphoning from the poor-but-less-poor to the more-poor is a willful deception. It completely ignores the vast explosion in the income and wealth of those at the top. If you want to know where we can get the money to help poor people in China and India and Mexico, we know where to look: the upper half of the global income distribution diagram. See below: 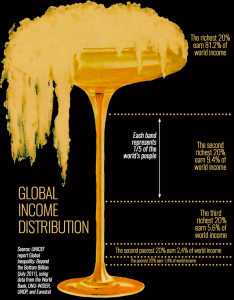 Now the actual numbers of such distributions are often debated. But you don’t have to accept UNICEF’s exact numbers to acknowledge that there is a vast ocean of income that is controlled by a tiny portion of the world’s people. There is more than enough money being generated in the global economy to ensure a decent standard of living for a Bangladeshi factory worker and an out of work Ohio iron worker with a bad knee and two kids. To constantly frame this as a zero-sum game between the global poor and the American poor is an act of basic dishonesty.

But suppose you’re a journalist, writer, or academic who really does think that outsourcing is the only way to help the world’s poorest. Isn’t your own moral path then clear? Shouldn’t you be outsourcing your own job to people from the poorest parts of the earth? There are many talented and ambitious writers and scholars in China, India, Pakistan, Nigeria. If you make, say, $80K a year as a pundit, isn’t your moral duty to work with your employer to outsource your work to a poorer country? Punditry, after all, is very easy to conduct via telecommunications, unlike being a waiter, an orchard worker, or a yoga instructor. And isn’t it very possible that you could get at least a large majority of the value of your work from a team of people in India at a fraction of the cost, while providing all of them with wages far higher than the median income of their home country? You could have your employer pay five Indian writers $10K/year to replicate what you provide for the company. The Indian writers would make better than six times the Indian median annual income. And your employer gets to pocket that extra $30K—which, after all, is why outsourcing actually exists, to improve profits. Everyone wins! Well, not you. But this is precisely the bargain that you think America’s uneducated labor force should make. It is, in fact, a condition that you have loudly argued is morally necessary. Yet to the best of my knowledge, not a single neoliberal wonk has fallen on his or her sword and given up their job to a worker in the developing world, nobly sacrificing their own economic good for that of several other people, and accepting a life of poverty, despair, and opiate addiction in the devastated post-industrial landscapes of modern America. It seems that the morality of outsourcing only applies to other people, and not the kind of people who live in the tony precincts of post-collegiate cosmopolitanism. Funny about that.

I have a particular individual who should step right up to the plate: J. Bradford DeLong, Clinton apologist, hippie puncher, and relentless enemy of the well-being of America’s uneducated labor force. As a professor of Economics at UC-Berkeley, DeLong is paid $135K a year. (As a public employee, DeLong’s salary is a matter of public record.) Couldn’t his job be performed by some of the self-same Chinese workers that he has such deep concern for? It’s not like there aren’t a lot of talented Chinese workers with degrees in economics. Let’s be generous and assume that those Chinese workers could only perform his job at 80% of his value. If you’re UC-Berkeley, and you could hire five Chinese people with MAs in economics at $20k, have them teach the three classes he probably teaches in a year via Skype, publish some research, and attack commies and poor people on his blog, all while pocketing the extra $35K? Those five Chinese people would make about two and a half times the median Chinese income for that kind of money, after all. Wouldn’t you take that deal at 80% of the quality? And wouldn’t Brad’s own moral compass insist that you were morally obligated to do so? (If you’re worried for ol’ Brad, don’t be: tenured economics professors always have side hustles, doing “consulting” work that typically pays more in a day than your average destitute former factory worker on food stamps makes in a month. He’ll be just fine.)

But let me finish with a familiar question: is there a way to interpret DeLong’s refusal to outsource his job to China other than as a call to keep China a society of poor subsistence rice farmers as long as possible—keep them poor, barefoot, uneducated, and by no means allow them to work at any of the high-value professor of economics and anti-poor class warrior occupations we want to keep in the United States?